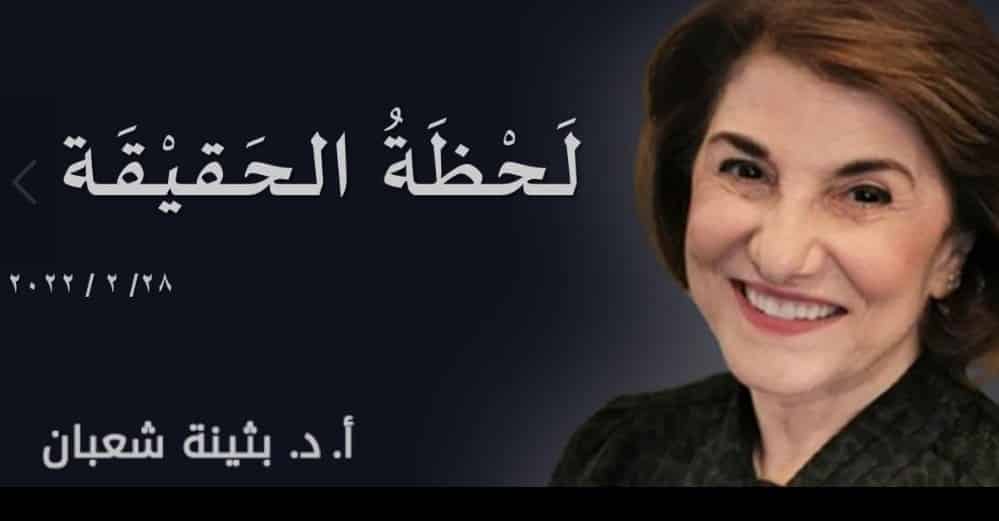 By Buthaina Shaaban (translated from Arabic) for VT Damascus

What is happening today in the world is a natural result of accumulations that began since 1990 with the dismantling of the Soviet Union and the Warsaw Pact and the insistence of the colonial powers to keep NATO to continue waging criminal wars against sovereign states, and invading safe peoples despite the talks that took place at the time between the West and Presidents Gorbachev and Yeltsin to dissolve the two alliances together.

Assad's advisor Buthaina Shaban : The world is fed up with Western domination pic.twitter.com/Xzm8n7Jw5j

It is also the result of thirty years of difficult relationship between Russia and the United States; In the negotiations that the two sides fought in 1990-1991, the United States aimed first and foremost at obtaining Russia’s approval for the entry of a united Germany into NATO. And US Secretary of State James Baker gave his famous promise at that time (“not an inch to the east”), meaning that NATO would not expand to the east and not increase the number of its members.

"The so-called “Caesar Act” is an American flagrant violation of the human rights and causes large damage to the economic and living conditions of this people."
-Buthaina Shaaban-https://t.co/5a4sSez8XZ

This pledge was the least that the United States could do at the time, which insisted on dismantling the Warsaw Pact, claiming that resources should go to development and that there was no need for military alliances anymore. After that date, the West worked to divide and destroy Yugoslavia, and to increase the members of NATO from twelve to thirty members, and it continued to expand eastward until it wanted the last step of annexing Ukraine to it to be completely on the borders of Russia so that Russia can no longer afford to It has an independent decision, or to play the role it is qualified to play in the international arena.

Therefore, what President Putin has done is indeed a correction of history, which is not only a necessity to ward off an existential and future danger from Russia, but it has also proven to be much further than that. All opinions and statements say that Biden made a strategic mistake with his hostility to China and Russia, or that he committed a historical mistake by trying to drag Ukraine into NATO, ignoring the position that Russia will take in this regard, and many have praised Trump’s statement that what Putin has done is a genius, of course.

The context of the conflict with his rival who occupies the White House and in the context of the upcoming midterm elections, for which Trump is actively and ambitiously preparing. But the truth of the matter at this historical stage is that the United States has reached a dead end as a leader of a single pole that no longer values ​​international law or international legitimacy, in addition to the disasters it caused in many countries in the world and the unilateral sanctions it imposed on peoples outside the framework of international law and all norms. International and Human Ethics.

If we add to this the difficult situation that the United States suffers from internally as a result of its economy’s dependence exclusively on selling weapons, igniting wars and spreading epidemics, and not on civilian production and equitable distribution of wealth, we conclude that what President Putin has done is an international and humanitarian necessity to help in the birth of a new multi-world order Poles The entire world aspires to its birth, and the Western colonial bloc is trying to stop the counter of this birth, which neither history nor human necessities can afford to postpone.

And if we recall the Monroe Doctrine, which is still in force in the United States, which states that the United States has the right to prevent “by force” the emergence of any threat in its vicinity that endangers its existence; Hence the Bay of Pigs crisis with Cuba, which almost led to a nuclear war because the Soviet Union wanted to place its missiles there. Hence, the United States interferes in the affairs of Central and South American countries in order not to allow any hostile activity to threaten its security in the environment, which it considers its right to protect its national security.

If we recall all this, what Putin did was to apply the Monroe Doctrine to Russia by not allowing a hostile country to possess weapons that threaten its national security and the security of its future generations and to join the anti-Russian NATO. But we all know that the West uses two standards: one for itself and does not accept anyone to use it, and a measure for others does not apply to them what the West accepts for itself because it believes that everyone is less than the West. In this historical juncture, Putin put the West to the test and did what, if the West was in its place, he would have done it a long time ago, and he would not have waited all these years patiently and with a serious attempt not to reach Saddam.

From here we can re-read the intense Western media campaign launched by Western media run by deep governments Associated with the major capitalist monopolies in the West in order to introduce illusion to Putin’s determination and terrorize him from the consequences that he may reap if he takes this step, because it is a battle for existence and a battle for the future. The experiences of Russia and the experiences of the whole world with the West prove that they do not respect a promise, covenant, or even a signed agreement.

Rather, they completely separate what they say, what they intend to do, and what they do later. One of the biggest proofs and most enjoyable moments is watching the President of Ukraine, who was a former comedian and who is the tool of the West in Ukraine, who brought about a colorful revolution from that run by the American intelligence, and he blames the West for not coming to his support as they promised him and thinks that he is smart when he gives them a lesson He said: “If you do not defend us, how will you defend yourselves?” It is clear that he did not understand the equation and did not understand the lessons of the outcome of pawns like him at all, and did not know how to use it as a pawn and for what reasons they considered. And even in this case, where are the promises of the West to Ukraine?

And what did the West do with it? The West weighs matters in the balance of its purely capitalist interest by dominating the wealth of peoples away from values, morals, promises and international laws. What is happening today will re-draft international law, international legitimacy, and the foundations that must be adhered to in relations between states. Many lessons will emerge in the coming days, but what is happening is similar to what happened in 1956, when the tripartite aggression against Egypt marked the end of the emperor.