Vladimir Putin has become “Putler”, something halfway between Putin and Hitler. For the less aggressive, the Russian president is Vlad the Mad. “There has never been a genocide against the pro-Russian populations in Donbass. Nazi formations do not exist and have never existed in Ukraine and there has been no massacre in Odesa. 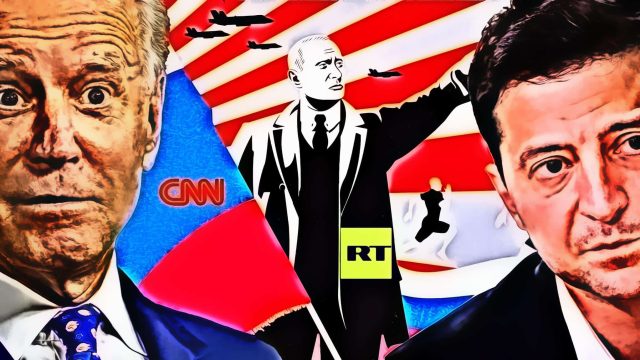 Putin threatens the world and must be stopped.” Western media is treating the Ukrainian crisis as if it were selling soap bars with TV commercials. The Western media world is fighting a war against truth. There is an official dogma and anyone who claims otherwise is a heretic and must be isolated. Any evaluation, any information that collides with the Washington consensus is branded as fake news.

The world of Western information in these hours offers the worst of itself. It has already happened with the civil war in Syria, with the invasion of Libya, and the overthrow of Gaddafi. But this time even worse happens.

The Western information factory does not just hide the truth and orient public opinion. The Western mainstream constructs precise and accurate storytelling. Using old movies and old photographs and pretending to be real footage taken from war video games. It seems impossible but this is exactly what is happening. Tg2 of Rai, the Italian state television broadcast a video of the War Thunder video games, pretending to be a missile attack by the Russian army against Kiev.

A video of an anti-tank vehicle swerving and crushing a civilian’s car on the streets of Kiev was broadcasted all over the world. In the globalist narrative that medium is clearly Russian. Too bad that it was actually a Ukrainian army vehicle.

Throughout the western arc, the media spread false news in defense of the anti-Russian dogma. Nobody questions the reasons that prompted the Russian presidency to launch the special military operation in Ukraine.

Nobody raises questions about the eastward enlargement of NATO which, in the early nineties, had signed an agreement with the Russian Federation, guaranteeing that it would not advance an inch towards the Russian border.

No one can remember the real genesis of Euromaidan, with the intervention of Western NGOs and the US State Department to overthrow the pro-Russian government in Kiev. To complete the depressing picture of this end of the Empire comes the ban against RT and Sputnik. It is the end of democracy. Maybe yes, as long as there ever was one.