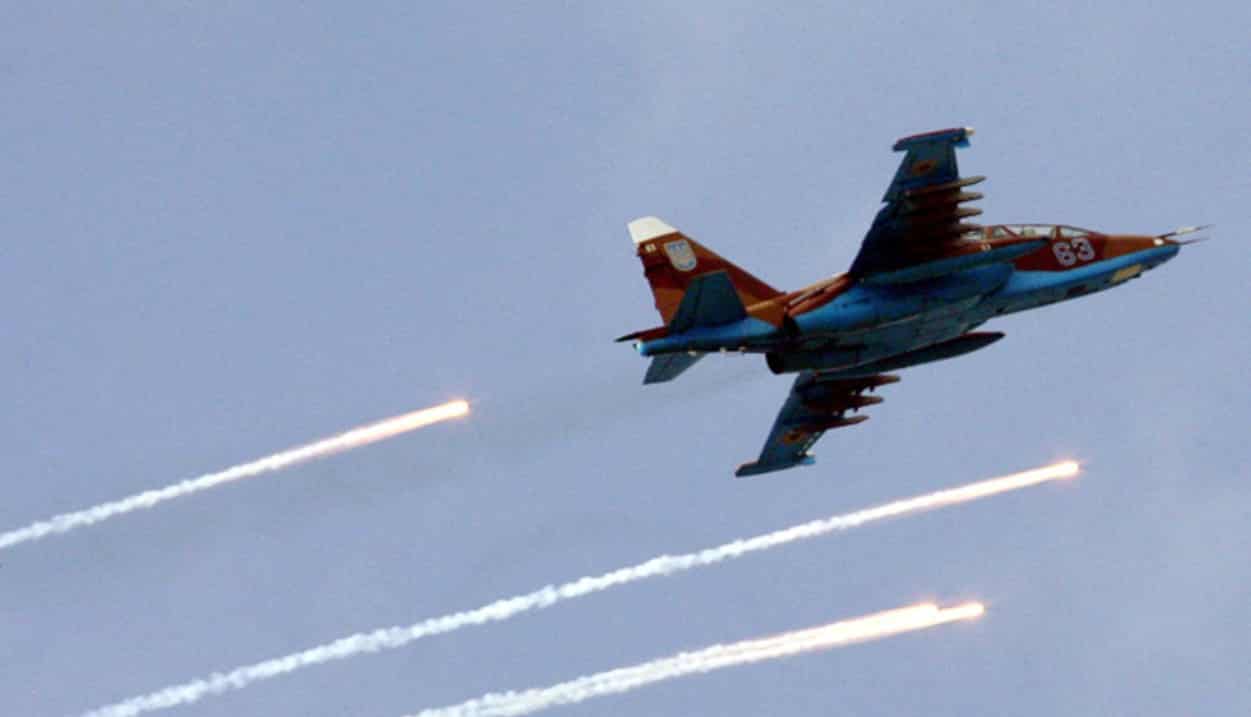 VT: Back in 2015, we hadn’t been banned by RT and Sputnik, who later on developed a love for Zionism and the Neocons.  Good read here as VT’s own investigations, initially at the request of the Malaysian government through VT editor/attorney Thomas Mattingly (later murdered) had exposed a joint Turkish, Ukrainian, Azerbaijani, Georgian and Israeli plot to bring down the aircraft and blame Russia.  This we can prove…

Could SU-25 fighter jet down a Boeing? Former pilots speak out on MH17 claims

As the investigation into the MH17 tragedy continues in eastern Ukraine, the SU-25’s chief designer has told German media that the fighter jet could not possibly have taken down the passenger plane. RT spoke to former pilots about the jet’s capabilities.

Malaysia Airlines flight MH17, en route from Amsterdam to Kuala Lumpur, crashed down over rebel-held eastern Ukraine on July 17, 2014. Everyone on board – 283 passengers and 15 crew members – perished in the tragedy.

A report on the official investigation published in September 2014 said the crash was a result of structural damage caused by a large number of high-energy objects that struck the Boeing from the outside. However, it did not conclude what the objects were, where they came from, or who was responsible.

Kiev and some Western states have placed blame on eastern Ukraine militias and Russia. The Russian Defense Ministry shared radar data pointing to other possibilities in July – including an attack by a Ukrainian Sukhoi-25 fighter jet, which was said to have been tracking the passenger plane.

While an official international investigation into the crash has been dragging on for nine months, the debate into the cause of the tragedy has been once again reignited by recent comments from the chief designer of the SU-25.

READ MORE:MH17 broke up in mid-air due to external damage – Dutch preliminary report

Kiev-born Soviet and Russian aircraft designer Vladimir Babak said on Monday that the SU-25 jet – which was spotted tracking the MH17 Boeing at the moment it crashed down – did not have the capability to shoot down a passenger plane. He said the fighter jet could have successfully attacked the Boeing at an altitude of 3,000-4,000 meters, but not at the plane’s altitude of 10,500 meters. He added that air-to-air missiles would have only damaged the Boeing – not completely destroyed it while still in the air.

“I believe all allegations that a SU-25 could be involved into this tragedy are a cover-up attempt,” Babak said in an interview to German channels NDR and WDR. “I cannot explain it otherwise. We cannot understand how an SU-25 could take down the Boeing.”

Based on the analysis of the plane debris and the nature of the damage, there is a high probability the plane was stuck by an air-to-air missile and an aircraft gun, Lieutenant General Aleksandr Maslov, former deputy chief of the Russian Air Defense and Land Forces, told RT.

“The published photos [from the MH17 crash site] enable to assume that the Boeing was downed by a military jet. Besides that, the existing damage indicates that the airplane was shot with air-to-air missiles together with an aircraft gun with a 30mm caliber,” Maslov said.

Claims that the passenger plane was downed by a surface-to-air Buk missile “cannot be supported,” as the nature of the damage from the missiles is different, he added.

Commenting on the jet’s ability to maneuver at higher altitudes, the former commander of an aviation division, Major General Sergey Borysyuk, noted that the jet would have had the capability to “maneuver comfortably,” even at such a high altitude.

Borysyuk explained that the R-60 missiles on the SU-25 have an infrared homing and a rod warhead. Citing the nature of the plane’s debris and the “precisely sliced fuselage,” he said that R-60 missiles were possibly used.

“The firing range of the missile is 7.5km. And in those conditions, the probability of hitting the target increases,” he added.

The former chief commander of Russia’s Air Force, Vladimir Mikhailov, also said he flew the SU-25, reaching an altitude of 12,000 meters and even 14,000 meters. He also stated that the plane “comfortably maneuvers” at such heights.

“If the plane was downed by Buk [missile defense system], it would have almost immediately fallen to pieces in the air and we could not have witnessed such large debris on the ground,” he said.

Along with Russia’s Ministry of Defense, he also questioned why the MH17 flight stayed within the flying corridor until it reached Donetsk, but then deviated from the route to the north.

In July 2014, Russia’s Ministry of Defense presented military monitoring data which showed Kiev military jets tracking MH17 shortly before the crash and posed a set of questions to Ukraine over the circumstances of the tragedy, which have still not been answered.

Speculation about the combat capabilities of the SU-25 jet stem from the Russian definition of the aircraft’s service ceiling – which is not the same as its absolute ceiling, as defined by the US military, VT senior editor Gordon Duff told RT.

“The claimed service ceiling is based on the oxygen supply in the aircraft. Now, there is a claim that this plane [SU-25] will only work to 22,000 feet. At the end of World War II, a German ME-262 would fly at 40,000 feet, a P-51 Mustang propeller plane flew at 44,000 feet. The SU-25 was developed as an analogue of the A-10 Thunderbolt, an American attack plane. The planes have almost identical performance, except that the SU-25 is faster and more powerful. The A-10 Thunderbolt has a service ceiling of 45,000 feet. The US estimates the absolute ceiling, which is a different term,” Duff explained.

Moreover, Duff said one cannot be entirely sure the detected fighter jet was an SU-25 at all, as modern radar spoofing counter-measures – such as those designed by BAE Systems and employed by NATO – are able to mask any other aircraft, be it an SU-27 or F-15, as another plane.

Duff said he also discussed the possibility of the MH17 flight having been shot by a ground-to-air missile with experts from the FAA (Federal Aviation Administration), the FBI, the Air Line Pilots Association, as well as air traffic and air operational officers – and they all agreed that no proof of anti-aircraft missile use has been provided to the public.

It is highly unlikely that the launch of such a missile would have gone unnoticed in the area, Duff stressed, adding that the trail left by the rocket in the air would have been witnessed and filmed by “thousands.”

“There is no reliable information supporting that it was a Buk missile fired by anyone,” he added.