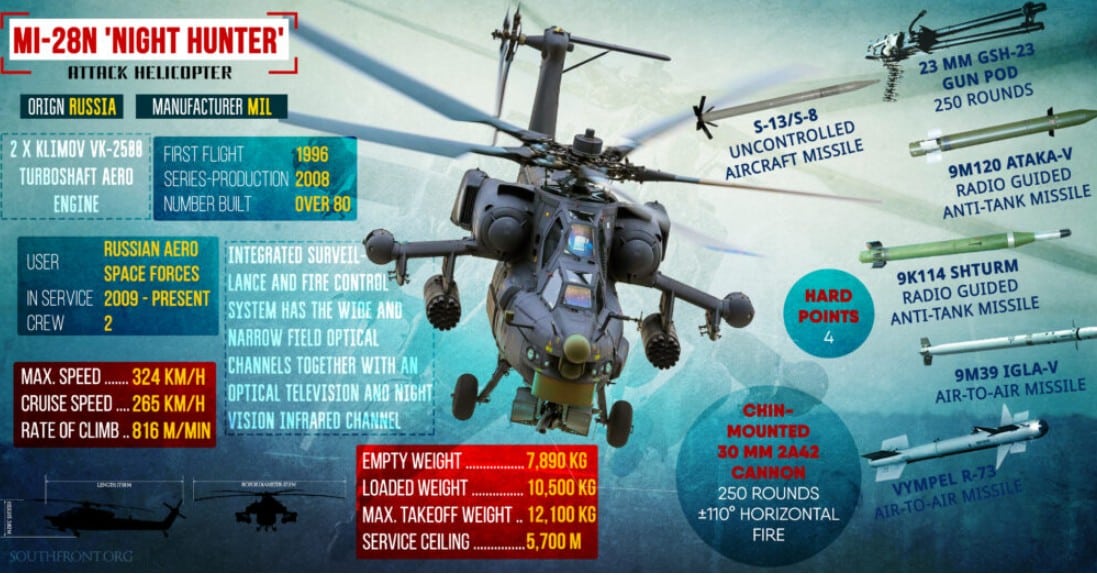 SF: The seventh day of the peace enforcement operation in Ukraine started with the further developments of Russian offensive operations in the north, east and south of the country.

This video, which Ukrainians claim shows a captured Russian OMON officer has proven to be staged — photos below. Turns out to be a Ukrainian member of the military-patriotic club from Ukrainian Nikolaev. pic.twitter.com/2X6K8Z9WI1

Russian forces have been reportedly finishing the operation to encircle Nikolaev city. Mi-28 attack helicopters were spotted moving to support this advance.

Hey…Russians can do propaganda too:

“Are you hurt? Let's go to the bomb shelter.”

Russian soldiers in Nikolaev help an old woman, who miraculously survived the Ukrainian armed forces shelling of the civilians. pic.twitter.com/P8JkSl26Ia

The incredible women Nastya Marzipan. She rescues animals in Nikolaev while explosions are heard around her house ❤️#Ukraine #UkraineUnderAttack pic.twitter.com/7G4Rjo3LbB

Meanwhile, units of the Donetsk People’s Republics supported by the Russian military have been finalizing preparations for the offensive to take control of Mariupol city.

Destroyed tanks of the Armed Forces of Ukraine near Mariupol. pic.twitter.com/GO15C5TXDG

DPR sources also reported a fierce attack of the Ukrainian military on the city of Gorlovka. Four Kiev soldiers were killed and three others were injured, according to DPR. DPR forces also suffered casualties. The city remains in the hands of DPR. The attack on Gorlovka was likely an attempt to draw attention of the advancing DPR troops from Mariupol. In the previous days, the Ukrainian Army was actively shelling Gorlovka residential areas. Most likely, Kiev units wanted to spend their munitions before the withdrawal from the nearby positions.

DPR forces with captured equipment of the Ukrainian military on the frontline: As of March 2, the Russian Defense Ministry says that a total of 1,502 Ukrainian military infrastructure facilities were put out of action. Among them: 51 command posts and communication centers of the Ukrainian armed forces, 38 S-300, Buk M-1 and Osa anti-aircraft missile systems, 51 radar stations.

The Russian military added that in order to suppress information attacks against Russia, the technological facilities of the Security Service of Ukraine and the 72nd Main Center for Psychological Operations were hit with high-precision weapons in the city of Kyiv. The hardware broadcasting of the TV tower was disabled.

Also, the forces of the operational-tactical and army aviation of the Russian Aerospace Forces delivered a massive air strike on the military infrastructure of Ukraine. 67 objects were hit.

Strikes hit buildings of SBU (Security Service of Ukraine) and other security organizations in Kharkiv:

One of the buildings of Kharkiv university on fire, hit by Russian missile. One of the first universities in Russian empire, officially founded in 1805. I interviewed a pro-Russian academic here in 2014. Putin is now destroying “Russian world” he is claiming to protect. pic.twitter.com/EvavU2L5SI

The Russian side also officially confirmed the control of the city of Kherson. Units of the Ukrainian Army in Tokmak and Vasilievka reportedly surrendered to the advancing forces.

A map summary for March 1: