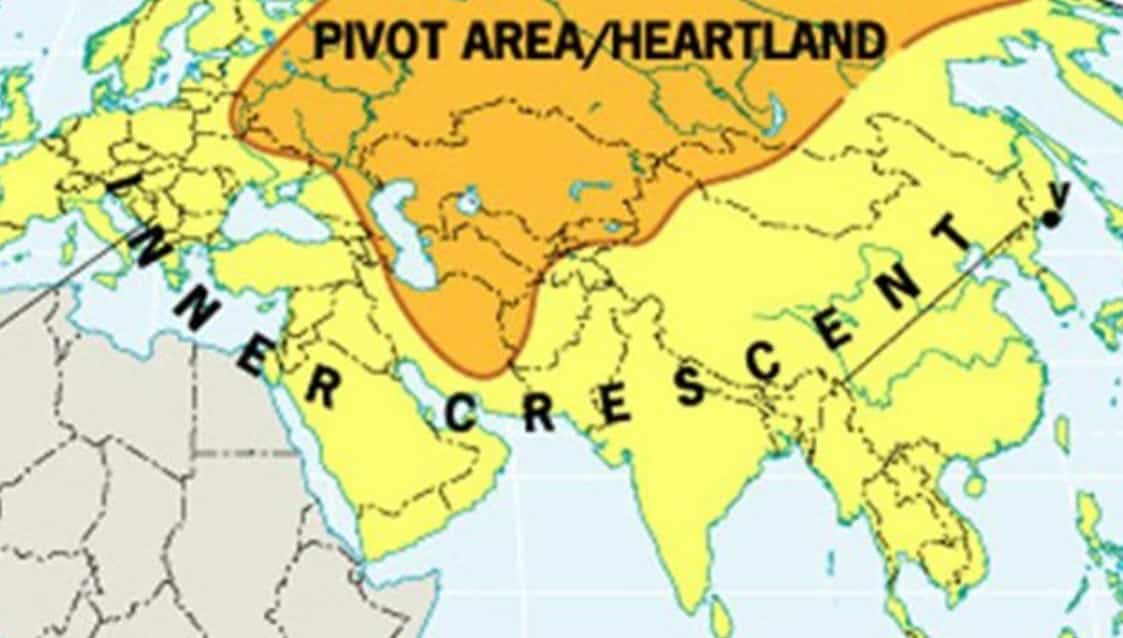 For those not familiar with my choice of words must read my opinion written in 2014 on ‘The Devil’s Triangle’ and the series on ‘End of Geo Strategy’.  The linkage explains the political economy of conflict that has entered a critical stage where interplay of military posturing and economics will decide the future role of Eurasia in the emerging global order. Obviously, in this big power rivalry, nations being used as proxies despite being theatres will have the least say.

To remind readers, Eurasia is Mackinder’s Heartland dominated for over a century through the Containment Strategy of West. In a straight line from Ukraine to Afghanistan, the Containment Ring is perforated in Iran, Afghanistan and Pakistan.

Consequently USA has bolstered its Southern Front in Middle East with Israel as pivot and India co-opted both in Middle East and Indo-Pacific Region. To make it more potent and risk free, USA and UK are also building naval power in AUKUS. This implies that the West is not sure about India manifesting its frontline role.

Afghanistan, Iran and Pakistan now become one pivotal region for development of BRI and CPEC right into the Arabian Sea-Indian Ocean. Myanmar provides China another route into the Bay of Bengal, Andaman Islands and Indian Ocean. Depending on what complementary roles are assumed by Russia and China, my hypothesis of the advent of Eurasian Century gets credence.

Post European unification wars of 19th century; the international strategic template is a strategic calculus of three geostrategic theories culminating in Political Absolutism. This competition accounted for unrelenting conflicts for centuries. The labyrinth of this absolutism lies in the USA’s obsession for total global dominance littered all over its policy papers.

Mackinder’s ‘Heartland Theory’ mentioned the areas of Europe and Asia (Eurasia) as the Pivot of the world that runs from Volga in Russia to the Yangtze in China Eastern Europe, Central Asia and from the Himalayas to the Arctic. The end of the world war resulted in Soviet occupation of Central Asia, parts of Scandinavia and East Europe.

Nicholas John Spykman theorized that the strip of coastal land that encircles Eurasia can be used to control the World Pivot. This notion of Rimland became the bases for containment, Warsaw Pact, NATO, CENTO, SEATO, APEC, four decades of instability in Afghanistan and now Indo-Pacific Command and AUKUS.

For the biggest world island (USA) insulated by oceans to effectively contain the World Pivot (Russia, East Europe, Central Asia and China) occupation of the Rimland needed a very strong Naval Power. USA found the answer in Admiral Alfred Thayer Mahan thesis of ‘The Influence of Sea Power upon History: 1660–1783’. A strong naval long arm capable to project military and air power became the cornerstone of US Geostrategy. USA became the lynchpin of the containment strategy to effectively show this muscle in the two World Wars and the Cold War. Indo-Pacific Command and AUKUS is the latest in this quest. Come 2022. Russia is not alone.

Bipolar World Ended but not the Cold War

With the disintegration of USSR, the Cold War seemed to end. Though the Warsaw Pact melted away, NATO became stronger backed by an EU that became a stepping stone to joining NATO. When Turkey was refused entry in EU, it weakened its role in NATO manifested in Turk policies of the past two decades. It has an enviable position controlling Straits of Bosporus from sea/land lanes of Caspian and Black Sea.

Turkey could make selective use of Montreux Convention to limit traffic of Russian warships to Mediterranean from the Black Sea and possibly a price EU and NATO will have to pay for the humiliation they incurred on Turkey.

Ukraine: The Precursor to New Balance of Power

Occupation of Crimea by Russia was a landmark. The spring in Ukraine led by fascists and dons backfired. Michael Hirsh commented that, “the United States and Russia have crossed a Rubicon in the Ukraine crisis, and Washington must now confront the likelihood that if the standoff continues, it will dramatically alter relations on a much larger map than Eastern Europe, inviting Russian recalcitrance in crisis zones as far afield as East Asia, Iran, Syria, and Afghanistan.”

With continued Eastward forays of NATO particularly in Georgia and Ukraine, yet another Rubicon is crossed and it was a matter of time how Russia reacted.  Russian invasion is set to add new dimensions to crises zones within the Devil’s Triangle.

The warm relations between China and Russia, Putin’s visit to India, India abstaining in UNSC are indicators of new alignments. The visit of Pakistan’s Prime Minister to Russia a staunch ally of China in BRI-CPEC is significant.

From Special Operations to Kiev

It seems that President Putin’s definition of Special Operations has evaporated in the fog of conflict. In all probability, the objective was to destroy alleged bio labs, neutralise locations of nuclear proliferation and create chaos in Ukraine.

It seems the battle plan for the first wave was meticulous but back up plans lacked detail and coordination. The composition of invading forces gave no indications of a ‘War of Conquest’. Now the objectives have been hastily extended to Kiev implying that Russia has been sucked.

A 60 KMs long column milling around Kiev (military parlance) with uncertain logistics and orders defies military logic. The fact that such an opportune target is being missed speaks negatively of Ukrainian military professionalism.

Russian forces have been able to cut off all sea lines of communications implying that a long battle of attrition for both sides will follow. In due course this could morph into asymmetrical warfare joined by non-state actors of every description.

As predicted by Michael Hirsh, the conflict will spread to other areas. Most obviously, Syria with large unexploited oil reserves could witness aggressive operation against the many non-state actors and proxies besieging it.  Pacification operations in Afghanistan by Russia and China will have a critical effect. As a counter move non-state actors in Afghanistan could become more obvious.

In the past sanctions have not worked. Pakistan survived 13 years of sanctions and isolation with a better livelihood for its citizens than now.

After the Cold War, Russian and Chinese trade has grown manifold world over. If Russia will get affected due to sanctions by a factor of 5, the effect on the world imposing sanctions will be a factor of 3.  In the interplay of liberalism, interdependence and bilateralism, Europe will suffer more than USA. If USA extends sanctions on China, the entire global financial system will run into irreversible crises.

In addition local economies sustain middle and poor classes like flowing water creates own channels to circumvent. Black and Irregular sectors will neutralise many negative effects.

Most it will result in more strategic manoeuvres. These will depend how far USA wants to escalate with the associated misery to its allies and how much Russia cost is prepared and capable to incur?

Within the interplay of political economy of war and economics launched by the West, Russia and China will be the major actors with Kazakhstan, Afghanistan, Iran and Pakistan set to play pivotal roles. Much depends which way Afghanistan and Pakistan swing.

Kazakhstan has elaborate networks of over 2,800 kilometres oil and gas pipelines connecting many countries including Russia. The Kazakhstan-China Oil Pipeline links fields in Kazakhstan’s Pre Caspian and South Turgai Basins to China. Sizeable volumes of Russian and Turkmenistan oil and gas also use this network under a transit agreement.

When sanctions are lifted, Russia could insist on being paid in gold or any method other than Dollar or Euro. The International Association of Oil & Gas Producers (IOGP) and OPEC will face a parallel system far more economical and competitive than the global oil market.

Getting Afghanistan on board in this pipeline is something that could not happen in past three decades. The Taliban Government will have to join the bandwagon for its own survival. Possible but least likely, Afghan Government could be swayed away by USA and West. Stability and Development in Afghanistan will be the major responsibility of Russia, China and Pakistan.

Ban on Russian use of SWIFT has been abrupt but some European Countries already have second thoughts with some measures of easing restrictions. China’s Cross-Border International Payments System (CIPS), founded in 2015, may have already matured. In all probability, CIPS will substitute for SWIFT. The entire matrix of Gold-Dollar and Oil-Dollar will get a telling blow.

Were these the results President Putin set out to unfold are a question only time will answer?

Will the foray unravel bigger plans to shift the balance of power from USA-NATO to Russia-China?