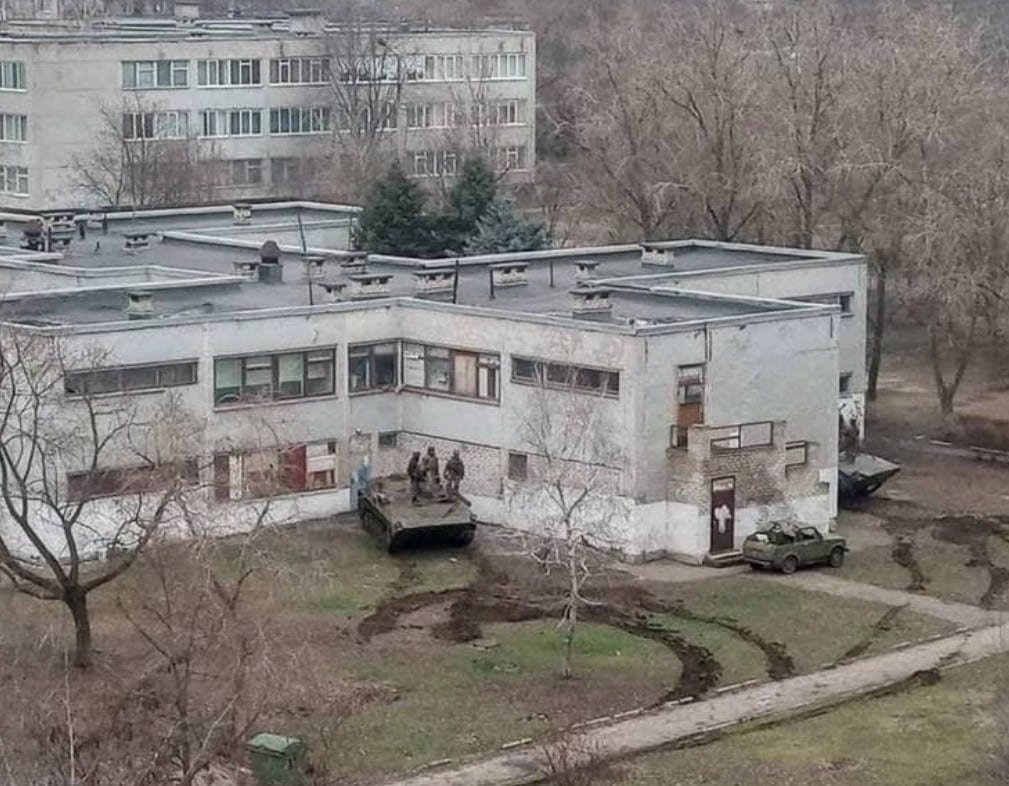 SF: On March 2nd, the People’s Militia of the DPR reported that nationalist forces are preparing provocations in the city of Mariupol.

The commander of a separate special detachment Azov of the 12th operational brigade of the National Guard of Ukraine is preparing a mass provocation with the death of civilians in the city of Mariupol, the DPR PM claimed.

According to the report, dozens of civilians were captured on the territory of the Metallurgical Combine Azovstal, which is located at the mouth of the Kalmius River. People were reportedly taken in mined workshops and office premises. The heavy military equipment was deployed in the yard of the enterprise.

In the event of a breakthrough of the joint Russian, DPR forces to the city of Mariupol, the Ukrainian nationalists reportedly plan to blow up the buildings and accuse Russia of destroying civilians and civilian infrastructure with artillery fire.

Another provocation is reportedly being prepared in the building of the local school No. 34 on 17 Gastelo Street in Mariupol, where more than 60 civilians are forcibly detained, including a lot of women and children. According to the DPR People’s Militia, numerous civilians who tried to leave the city through the humanitarian corridors were forcibly brought to the school.

At  the same time, the report reads that teachers of the Azov State Technical University, located on Universitetskaya Street, 7, in Mariupol, claimed that militants from the Azov division began mining the building of the University, as well as nearby areas, with controlled explosive devices. The mayor of Mariupol has recently shared photo of the alleged Russian missile in Mariupol. It turned out to be the Ukrainian Tochka-U missile. In November 2019, the 448th Missile Brigade of the Russian Western Military District, which by that time was the last Russian unit equipped with Tochka-U missile complexes, completed rearmament for the Iskander-M tactical complexes. The mayor of Mariupol has recently shared photo of the alleged Russian missile in Mariupol. It turned out to be the Ukrainian Tochka-U missile. In November 2019, the 448th Missile Brigade of the Russian Western Military District, which by that time was the last Russian unit equipped with Tochka-U missile complexes, completed rearmament for the Iskander-M tactical complexes.

Representative of the DPR People’s Militia Eduard Bassurin said in his interview on March 2:

It takes a couple of days to understand how the situation in Mariupol will develop. Because in any case, there will be a process of negotiations – we convince the enemy to lay down their arms, surrender or leave the city so that the civilian population does not suffer. A humanitarian catastrophe will soon begin there – without electricity, food. We need to do everything so that people don’t get hurt, that’s why we said we were opening humanitarian corridors. If there is still a normal consciousness that they will allow the civilian population to leave the city, this would make the way easier for us. If not, then, I think, negotiations for a special operation have not been canceled.

Armed members of the Ukrainian Azov battalion kill civilians who were trying to leave Mariupol:

Yesterday, on March 1, DPR forces claimed the opening of two humanitarian corridors for civilians in Mariupol, after the city was completely blockaded by the joint forces. However, the footage shared by the locals confirmed that armed nationalist battalions prevent people from leaving the city, wounding and killing them on the roads.

It should be noted that in the currently besieged cities, civilians, who were blockaded in the cities, are staying home and any mass crowdings in any civilian facilities are not possible. Thus, no mass casualties could be reported in cases of shelling on some civilian facilities by any of the warring sides. All reports about such cases may be considered as fake news or provocations.