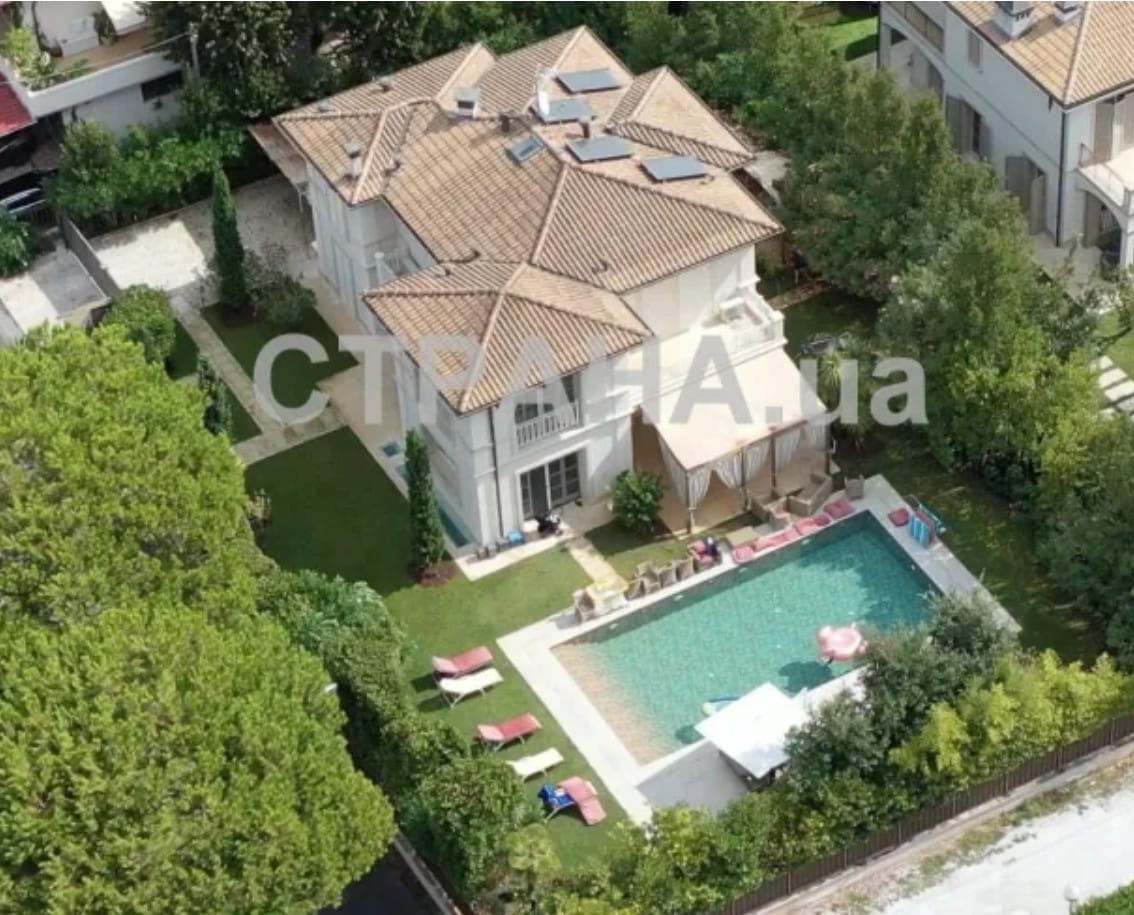 GH: The head of state got a house in an elite resort, where there are only show business stars and oligarchs around

Zelensky owns a mansion in an elite resort. Collage “Today”

President Volodymyr Zelenskyy is getting rid of real estate not only in Ukraine. He owns a luxurious villa in one of the most expensive resorts in Italy, Forte dei Marmi. But it turns out that the head of state put up this house for sale for 4.5 million euros.

The journalists of the Country who visited the “presidential” villa learned about this.

Where is the house and how much did it buy

The resort of Forte dei Marmi is located in Tuscany on the coast of the Ligurian Sea.

Zelensky’s 2018 declaration indicated that he and his wife Elena began to own a 413 sq. M. House in Italy. m. since 2015, which was issued to the Italian company San Tommaso SRL. It cost them UAH 88.5 million (EUR 3.1 million at that time). But the declaration for 2020 indicates that only his wife already owns the San Tommaso SRL company.

At the beginning of the presidential election campaign, Zelensky said they say, “they bought real estate because of the imperfect banking system in Ukraine.”

A source from an Italian real estate agency told Ukrainian journalists that the house was put up for sale for 4.5 million euros.

“For the last three years, the estate, which is located just 400 meters from the sea, has been rented for 12 thousand euros per month. Now it is rented by a US citizen with his family. They have been living there since July, but should leave in early October.”, – said the agency.

It is curious that Zelensky’s mansion is already on several real estate sites, but the price and owners are not indicated – only during a personal meeting with a realtor.

What about the villa itself

The Zelensky House is located in the very center of Forte dei Marmi. There are jogging and cycling tracks, cozy restaurants and beautiful houses. And the beaches of Forte dei Marmi are recognized as some of the best in Italy. On the territory of the plot there is a two-storey house of 480 sq. m and a swimming pool.

On the first floor there is a living room with a dining area and access to the terrace, a kitchen, one bedroom with its own bathroom, another additional bathroom and a laundry room.

On the second floor there are four bedrooms with their own bathrooms. On the ground floor there is a spa area with a sauna and jacuzzi, a gym, a bathroom and a small staff apartment. There are also massage tables in the house.

And the neighbors are only stars

The resort of Forte dei Marmi was chosen by Russian and Ukrainian celebrities and nicknamed among themselves “Beach Courchevel”. It was there that in 2015 the singer Vera Brezhneva played a wedding with the composer Konstantin Meladze, the journalist Ksenia Sobchak had a rest more than once. And this year the wife of the governor of Cherkasy Yelizaveta Yurusheva was seen there and, they say, the deputy head of the OP Kirill Timoshenko flew there with his wife.

Also, the Russian singer Irina Allegrova even sold an apartment in Miami for a house with a swimming pool in an Italian resort for 2 million euros. Rich Russians own a third of all houses on the coast here, which is about 2,500 villas. The oligarchs Roman Abramovich and Oleg Deripaska have been spotted here many times.

Note that even as president, Zelensky continues to receive considerable income for his past activities. Last year, together with his wife, he earned a total of more than UAH 20 million, and the salary was only UAH 336 thousand per year.