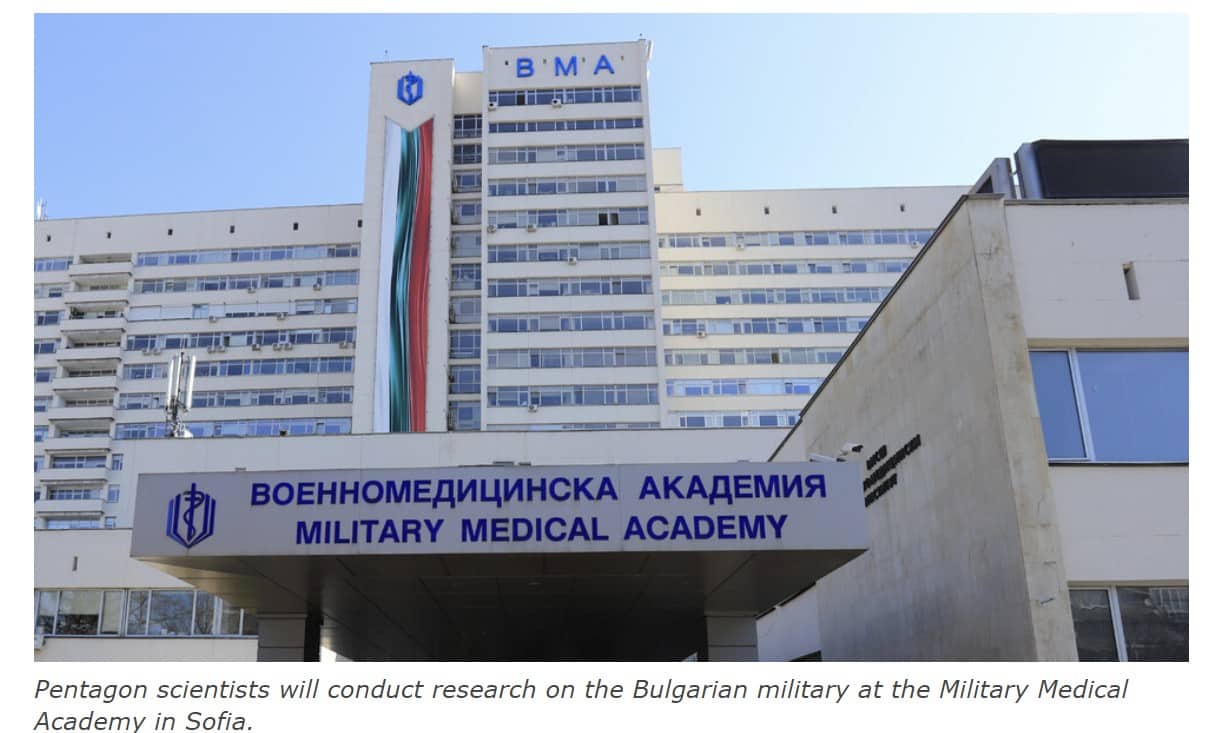 US military scientists from the Pentagon will conduct research related to infectious diseases on the Bulgarian military in Sofia, according to a statement in the US Federal Register of Public Procurement and Contracts. The documents were published on December 13, 2021. According to them, the US Department of Defense is looking to hire contractors, including microbiologists, to support the upcoming Pentagon military research mission in Bulgaria and Georgia from March 12 this year to March 11, 2026.

According to published documents, the program will be led by the USAMRD-G (US Army Medical Research Directorate-Georgia). USAMRD-G is a department with special status under the auspices of the Walter Reeds Research Institute (WRAIR), the largest medical research center in the United States Army. USAMRD-G military scientists have diplomatic status, although they are not diplomats and enjoy diplomatic immunity in Georgia, where they are based. This special unit operates the Pentagon’s bio laboratory in Georgia – Lugar Center in Tbilisi, and conducts biological research related to viruses, insects, virus carriers, resistant bacteria and particularly dangerous pathogens, which are categorized as biological agents with the potential to be used as biological weapons.

According to the announcement, USAMRD-G will be based at the National Center for Infectious and Parasitic Diseases (NCIPD) in Sofia and will conduct research at the Military Medical Academy (MMA) and NCIPD. The document states that the program includes research on humans and animals, but does not specify what activities will be carried out or what specific viruses and bacteria will be studied. 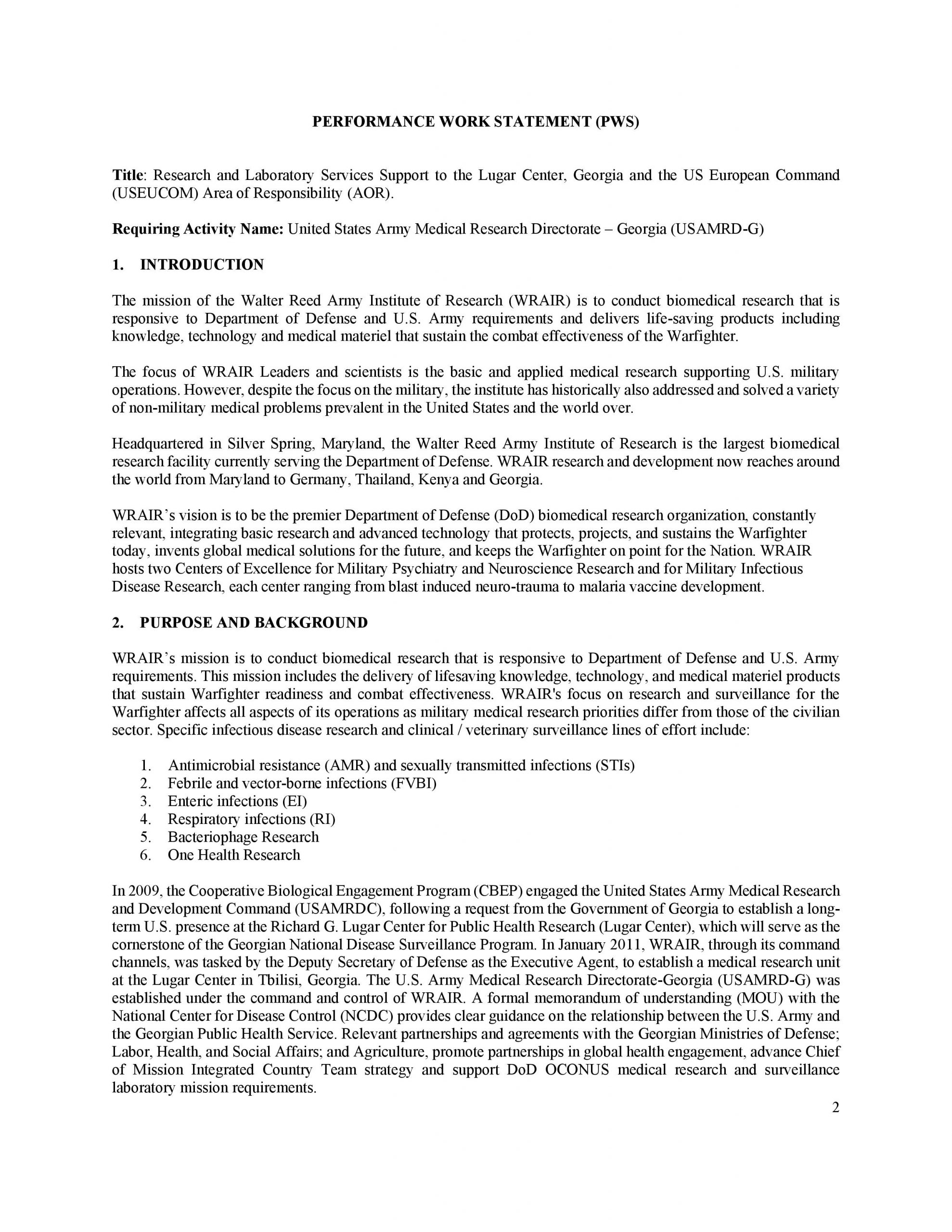 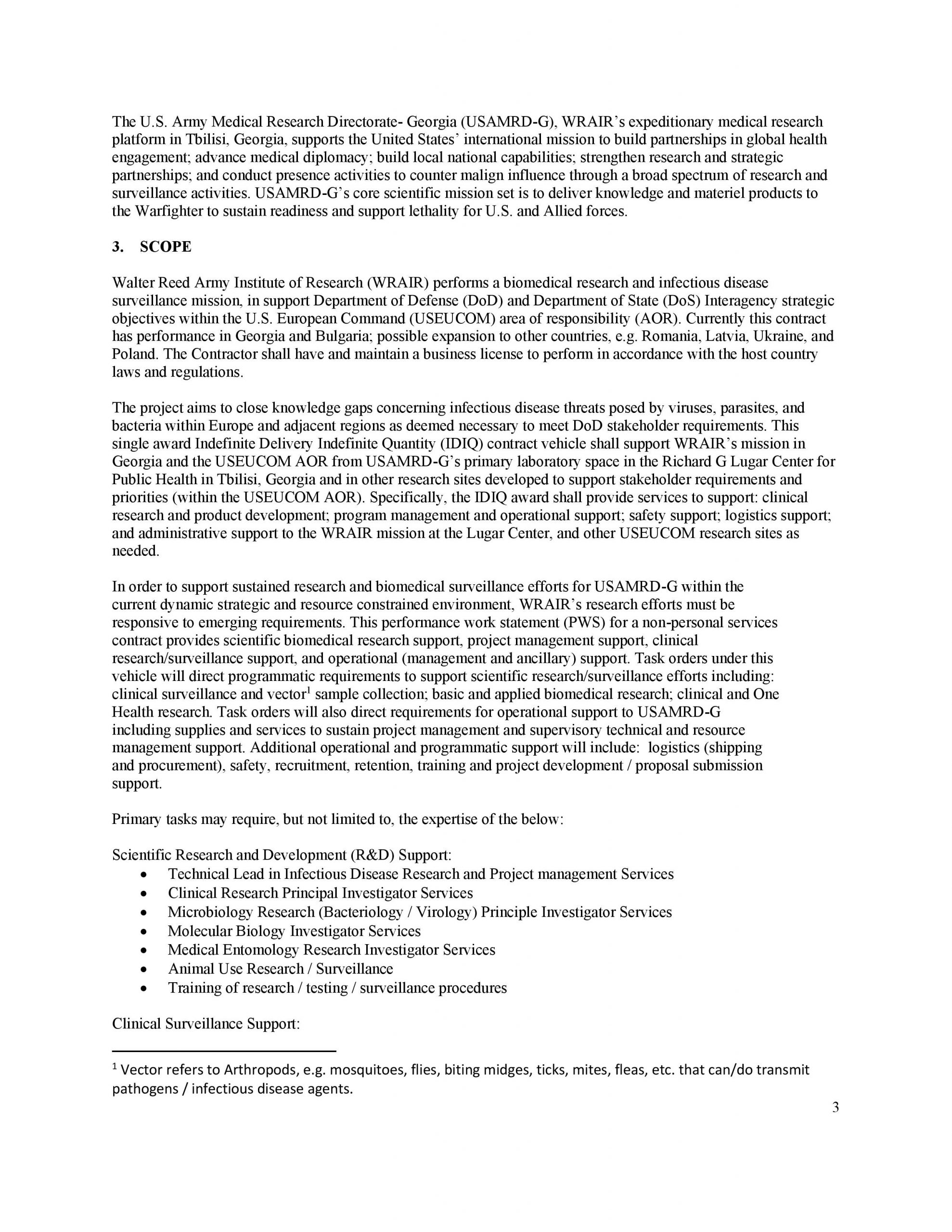 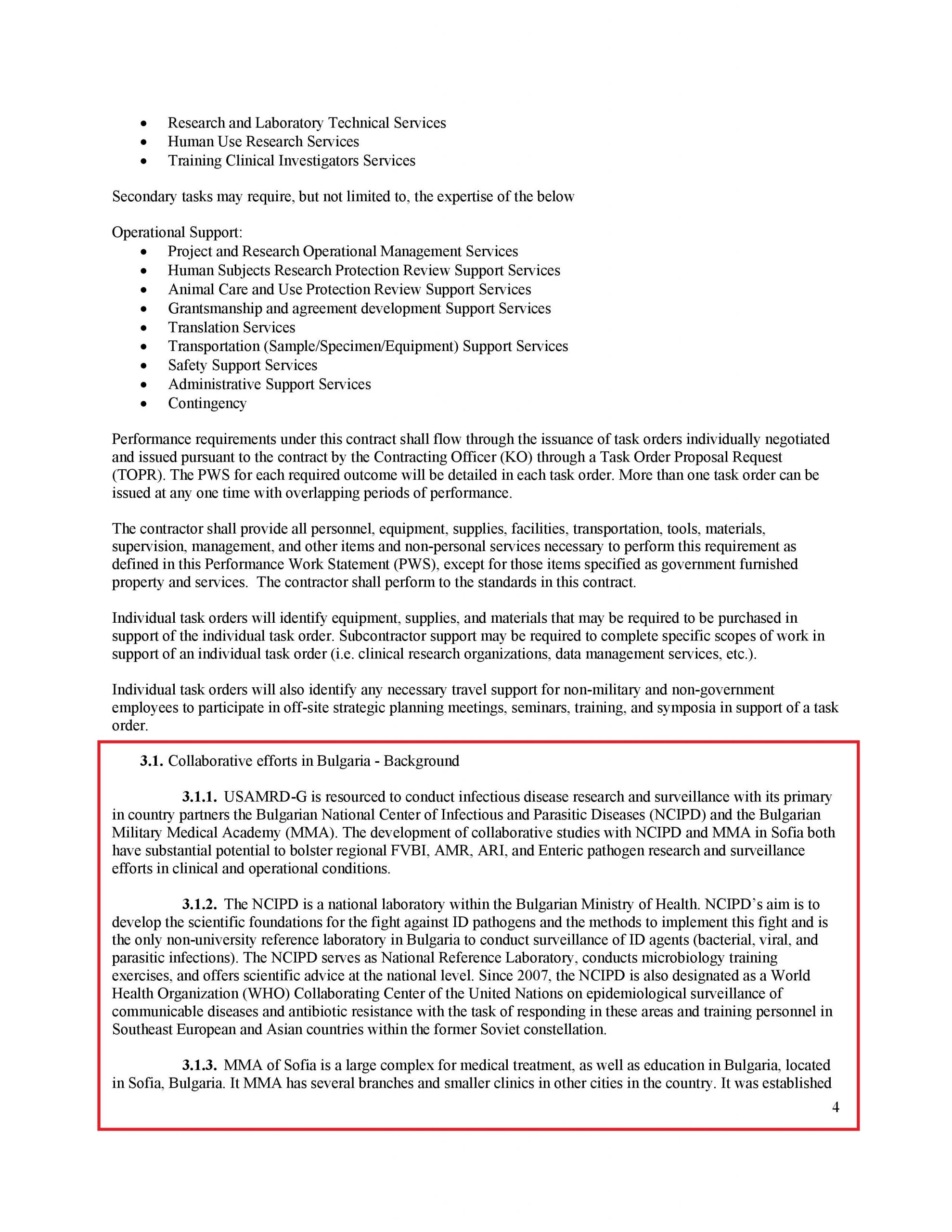 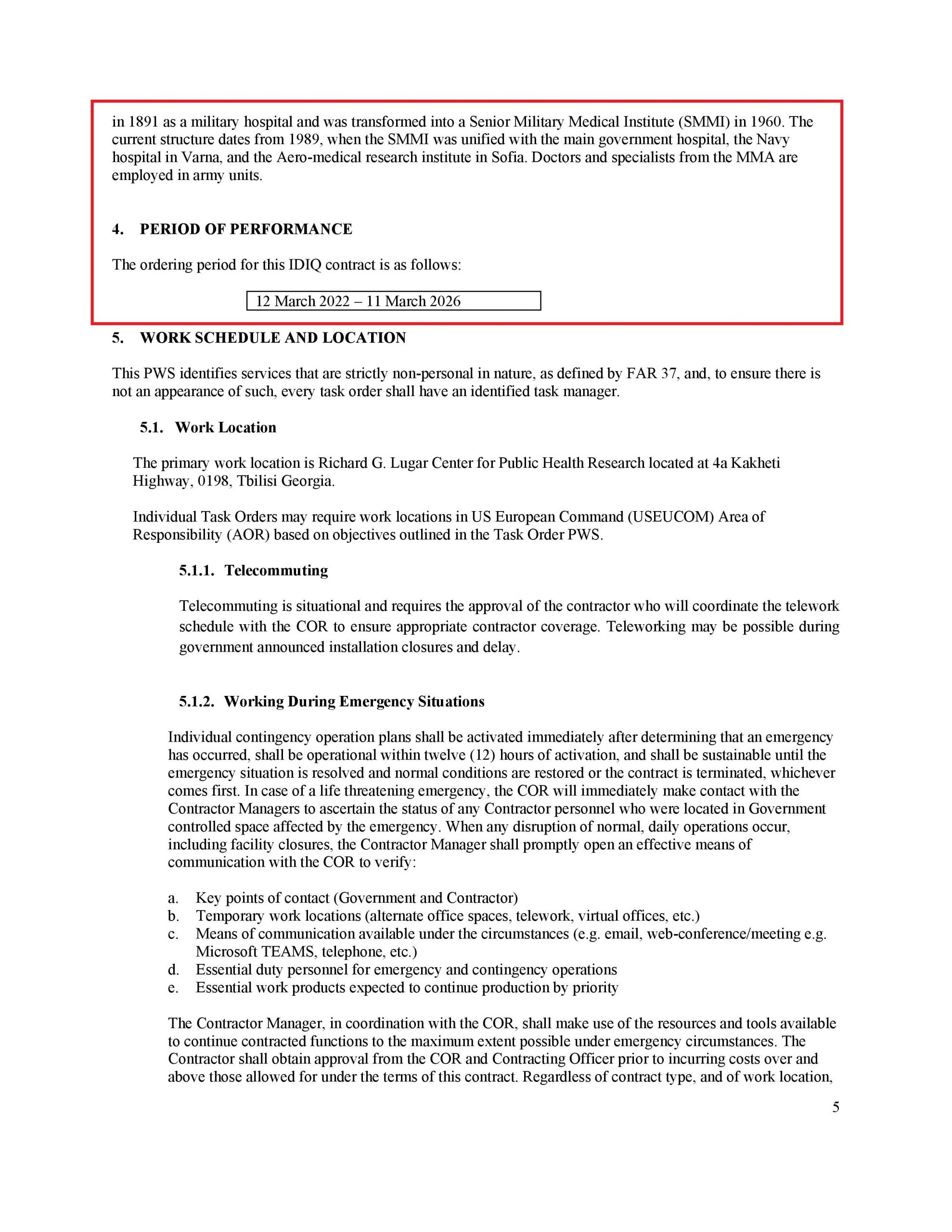 USAMRD-G begins research related to communicable diseases at the National Center for Infectious and Parasitic Diseases and the Military Medical Academy in Sofia. The duration of the program is from March 12, 2022 to March 11, 2026. Source: US Government System for Award Management (sam.gov) 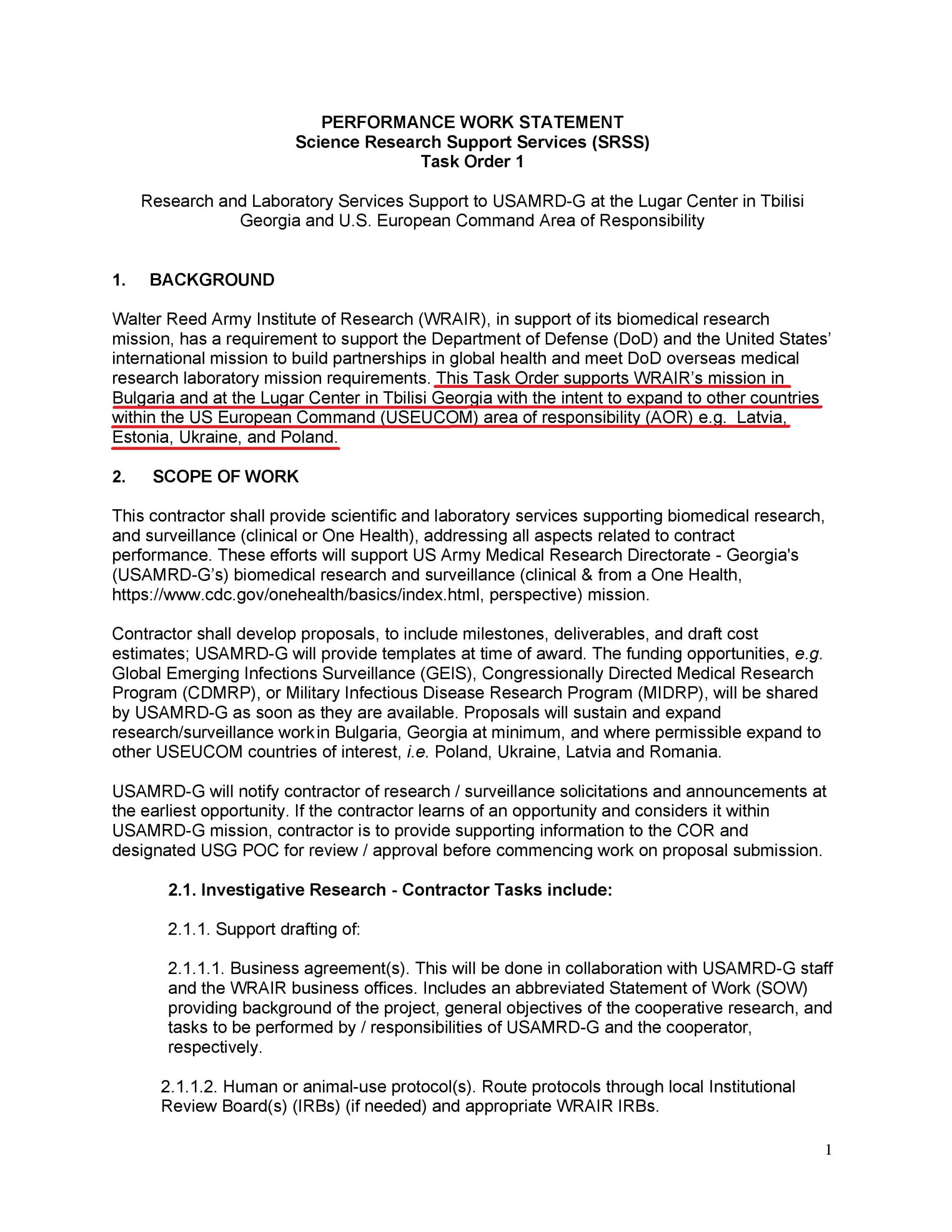 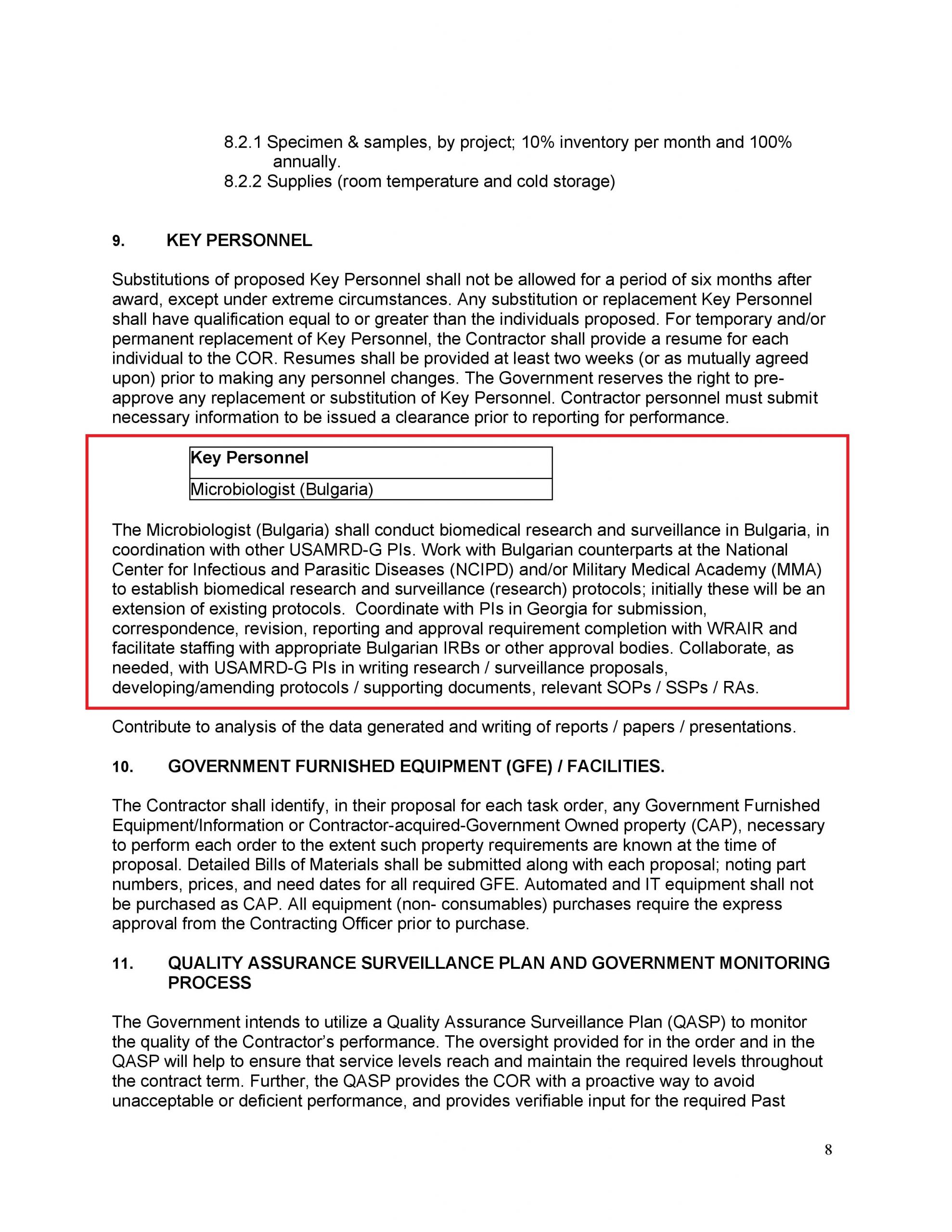 The Pentagon is looking to hire a microbiologist to conduct biomedical research in Bulgaria with USAMRD-G. The project will be implemented at the National Center for Infectious and Parasitic Diseases and the Military Medical Academy in Sofia. Source: US Government System for Award Management (sam.gov) 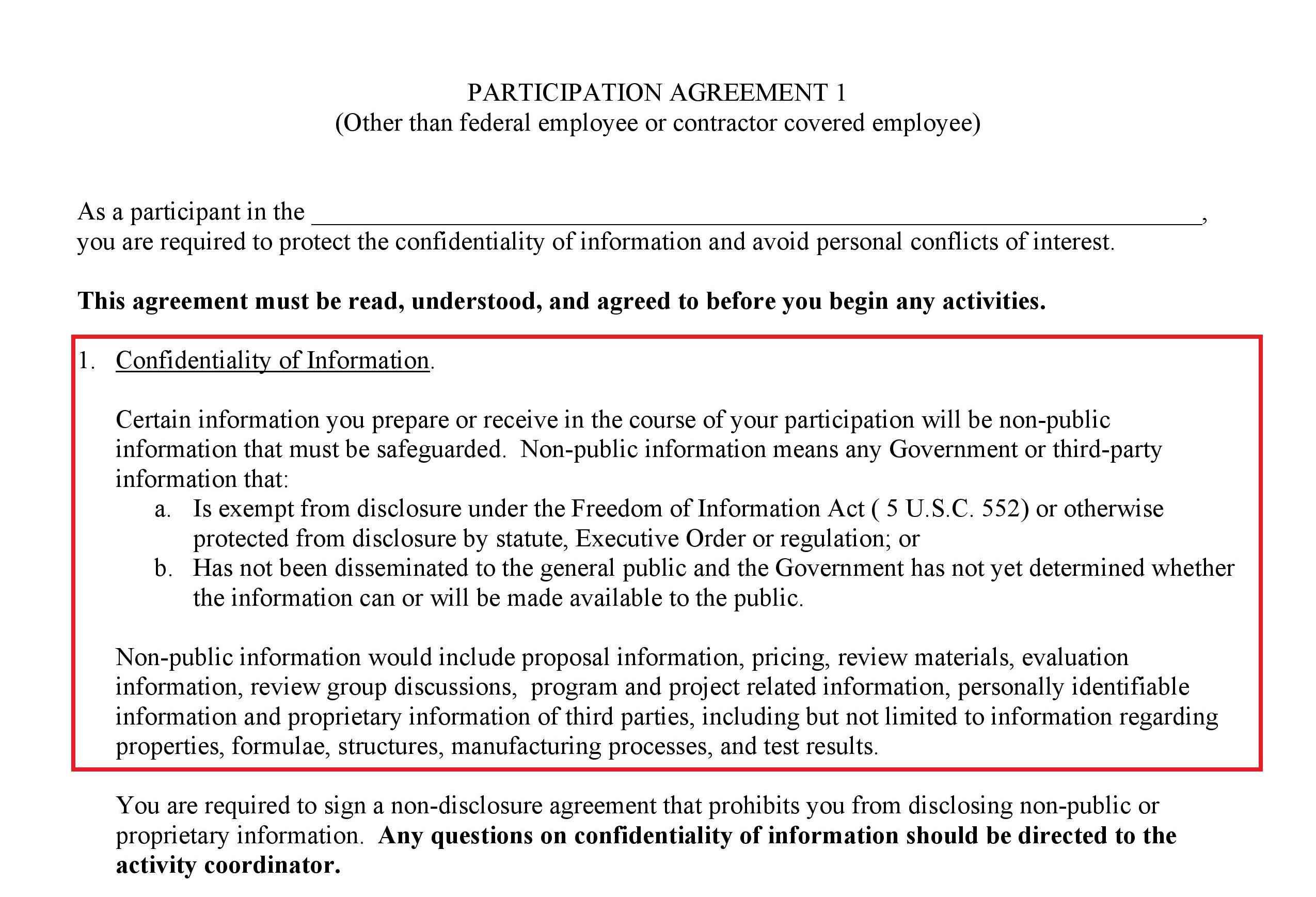 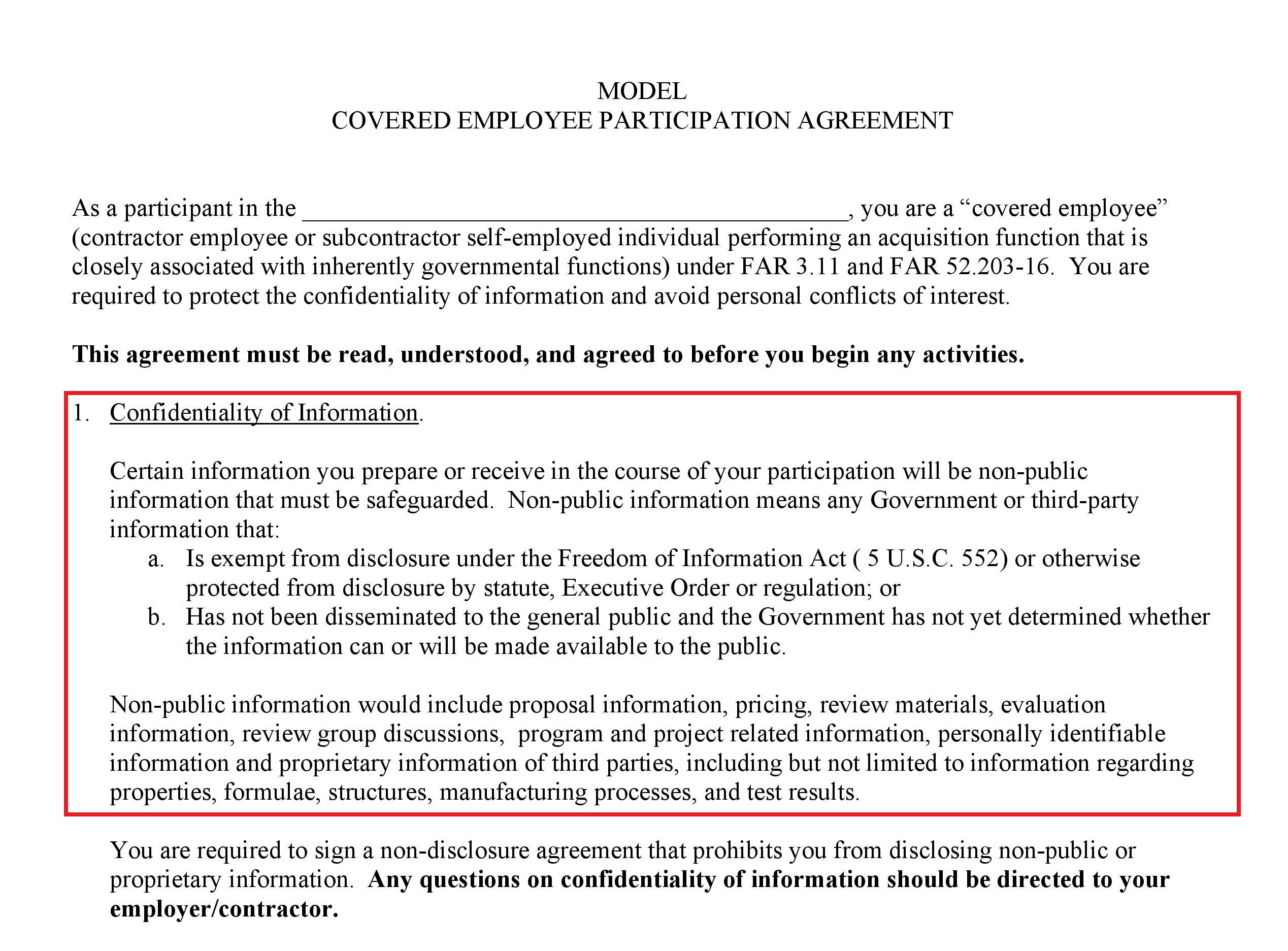 The director of the National Center for Infectious and Parasitic Diseases (NCIPD), Dr. Iva Hristova, confirmed the upcoming Pentagon program in Bulgaria. “The health and safety of our military and allies have always been our main concern, and this study will play a vital role in reducing the threat that diseases pose to our military,” said Dr. Hristova.

The answer of the director of the National Center for Infectious and Parasitic Diseases Dr. Iva Hristova and the questions she did not answer: 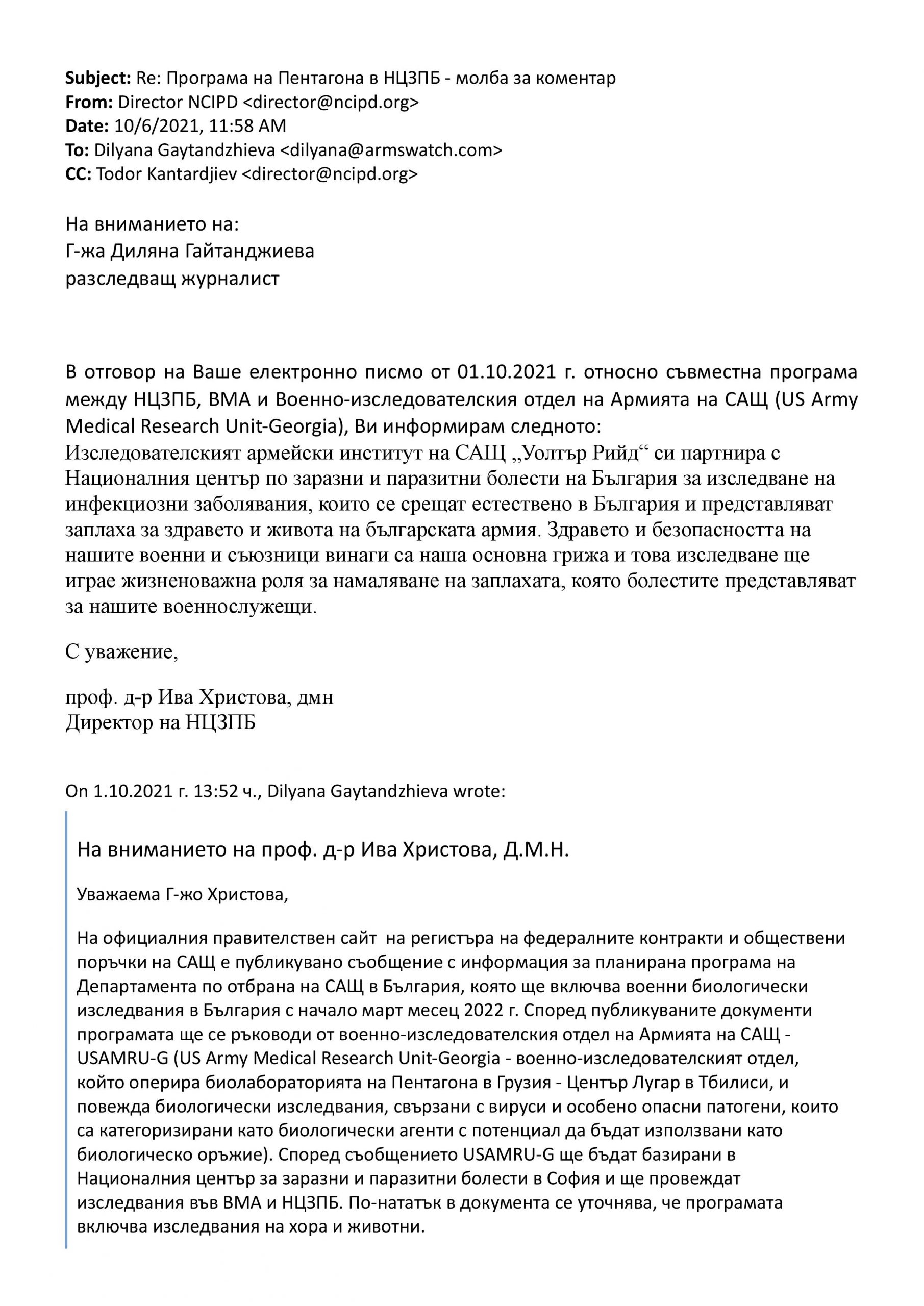 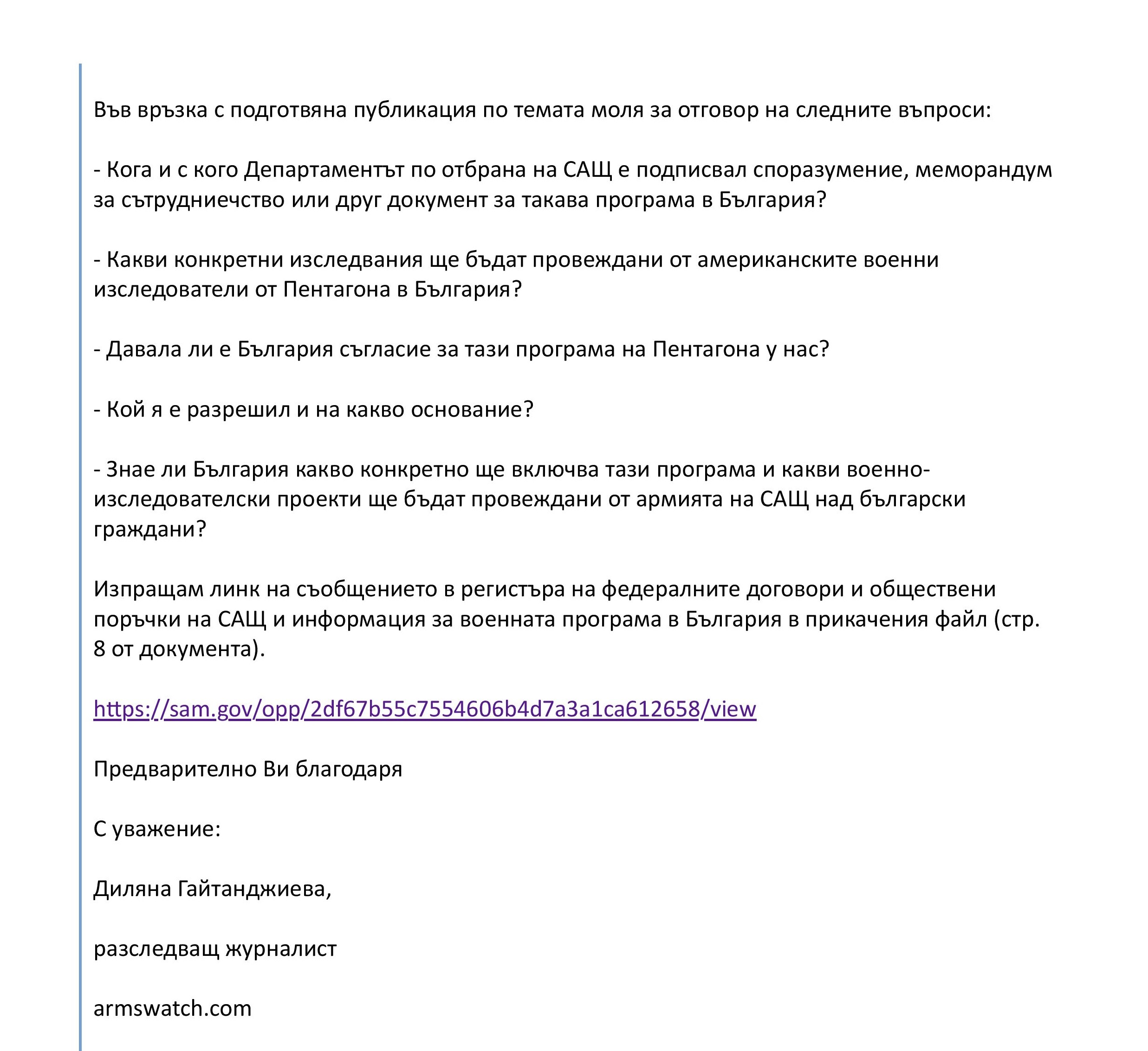 Internal documents reveal US biological experiments on their allies

A similar military research program of the US Army as the one starting in Bulgaria is already underway in Georgia and Ukraine. Internal documents show that the Pentagon is conducting biological experiments on 4,400 troops in Ukraine and 1,000 troops in Georgia. According to the documents, all deaths of volunteers must be reported within 24 hours (in Ukraine) and 48 hours (in Georgia).

Both countries are considered the most loyal partners of the United States in the region, and a number of Pentagon programs are implemented on their territory. One of them is the $ 2.5 billion Bio development Program of the US Department of Defense’s Threat Reduction Agency (DTRA), which includes research on bioagents, deadly viruses, and antibiotic-resistant bacteria and their spread among the local population.

Project GG-21: “All deaths of volunteers will be reported immediately”

The Pentagon is running a 5-year project with a possible extension of up to 3 years, codenamed GG-21: “Arthropod-borne infections and zoonotic infections among the military in Georgia.” According to the project description, blood samples will be taken from 1,000 servicemen during their physical examination at the Georgian Military Hospital in Gori.

The samples will be tested for antibodies against fourteen pathogens:

The amount of blood that will be taken from each military is 10 ml. Samples will be stored indefinitely at the NCDC (Lugar Center) or USAMRU-G and samples can be sent to the headquarters of the US Army Research Institute Walter Reeds (WRAIR) for future research. The results of the blood tests will not be provided to the study participants.

Such a medical procedure cannot cause death. However, according to the project report, “all-volunteer deaths will be reported immediately (usually within 48 hours of notifying the PI).” 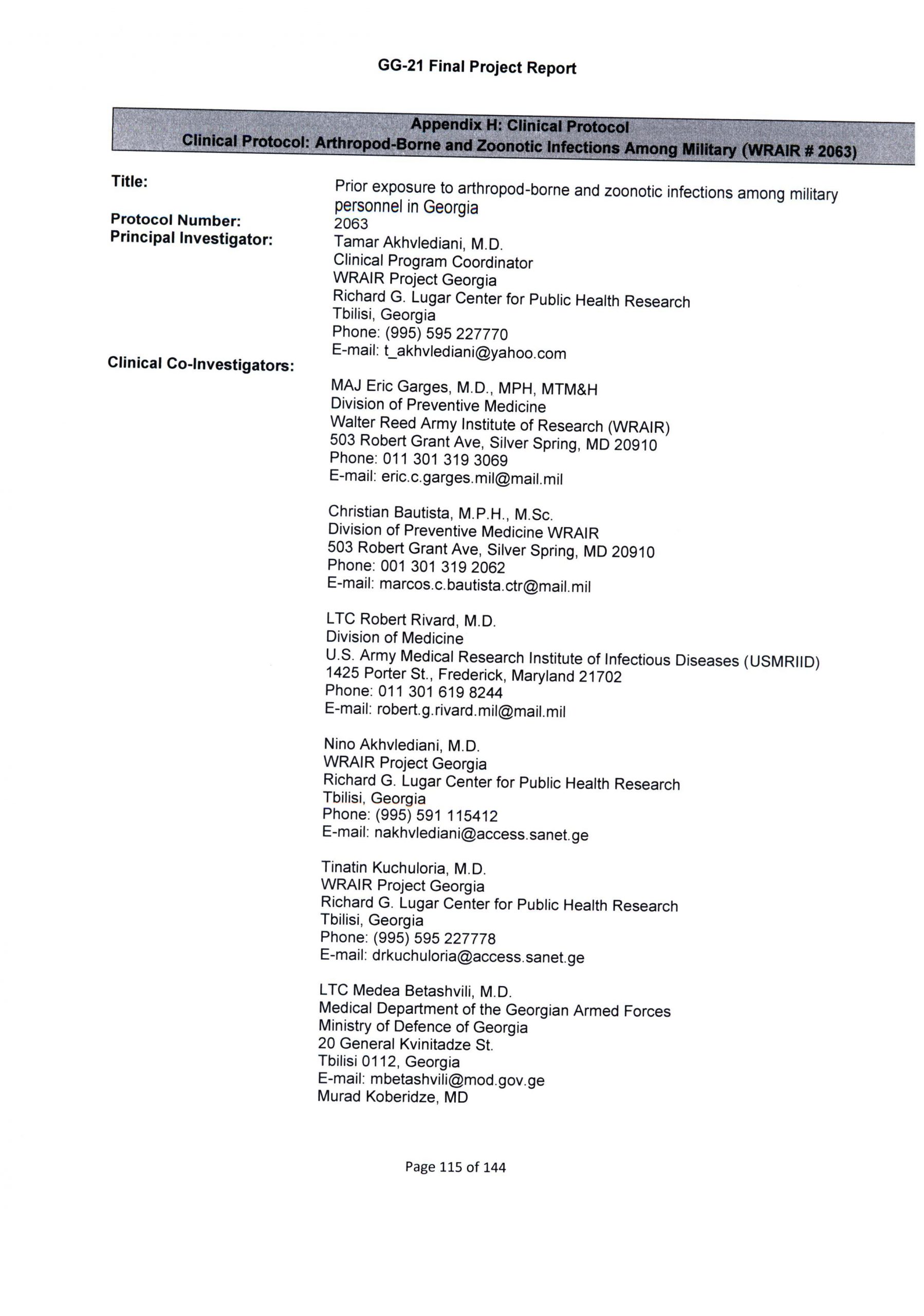 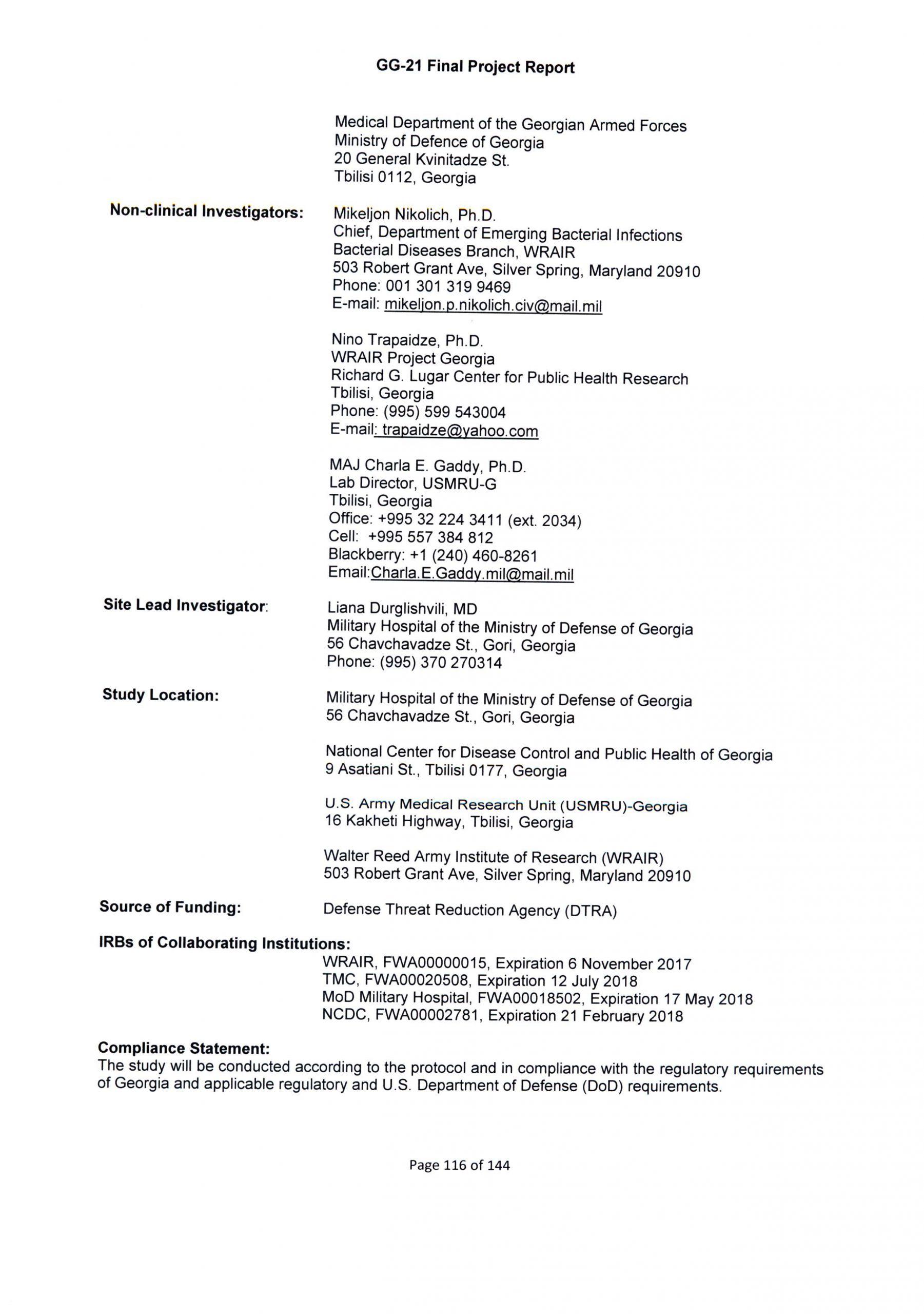 According to the GG-21 project report, “all-volunteer deaths will be reported immediately” to the Georgian Military Hospital and WRAIR, USA.

The soldiers’ blood samples will be stored and further tested at the Lugar Center, a $ 180 million Pentagon-funded bio laboratory in the Georgian capital, Tbilisi.

The Lugar Center has gained international publicity in recent years due to a number of scandals, laboratory incidents, including 249 deaths of patients enrolled in an experimental program against hepatitis C of the American giant Gilead in Georgia. The cause of death in most cases is unknown, according to internal documents.

The Georgian project GG-21 is funded by DTRA and implemented by US military scientists from USAMRD-G, who will be sent to Bulgaria.

Project UP-8: All deaths of study participants must be reported within 24 hours

The US Department of Defense’s Threat Reduction Agency (DTRA) has funded a similar project involving troops in Ukraine, codenamed UP-8: “Spread of the Crimean Congo Hemorrhagic Virus (CCHF) and hantavirus . The project started in 2017 and has been extended several times until 2020, according to internal documents.

According to the project description, the researchers took blood samples from 4,400 healthy soldiers in four cities – Lviv, Kharkiv, Odessa and Kyiv. 4,000 of these samples were tested for antibodies against hantaviruses, and 400 of them for the presence of antibodies against the virus causing the hemorrhagic fever Crimea-Congo (CCHF). The results of the blood tests were not provided to the study participants.

There is no information on what other procedures have been carried out, except that serious incidents, including deaths, must be reported within 24 hours. All deaths of subjects suspected or known to be related to research procedures should be brought to the attention of the US and Ukrainian Bioethics Committees. “ 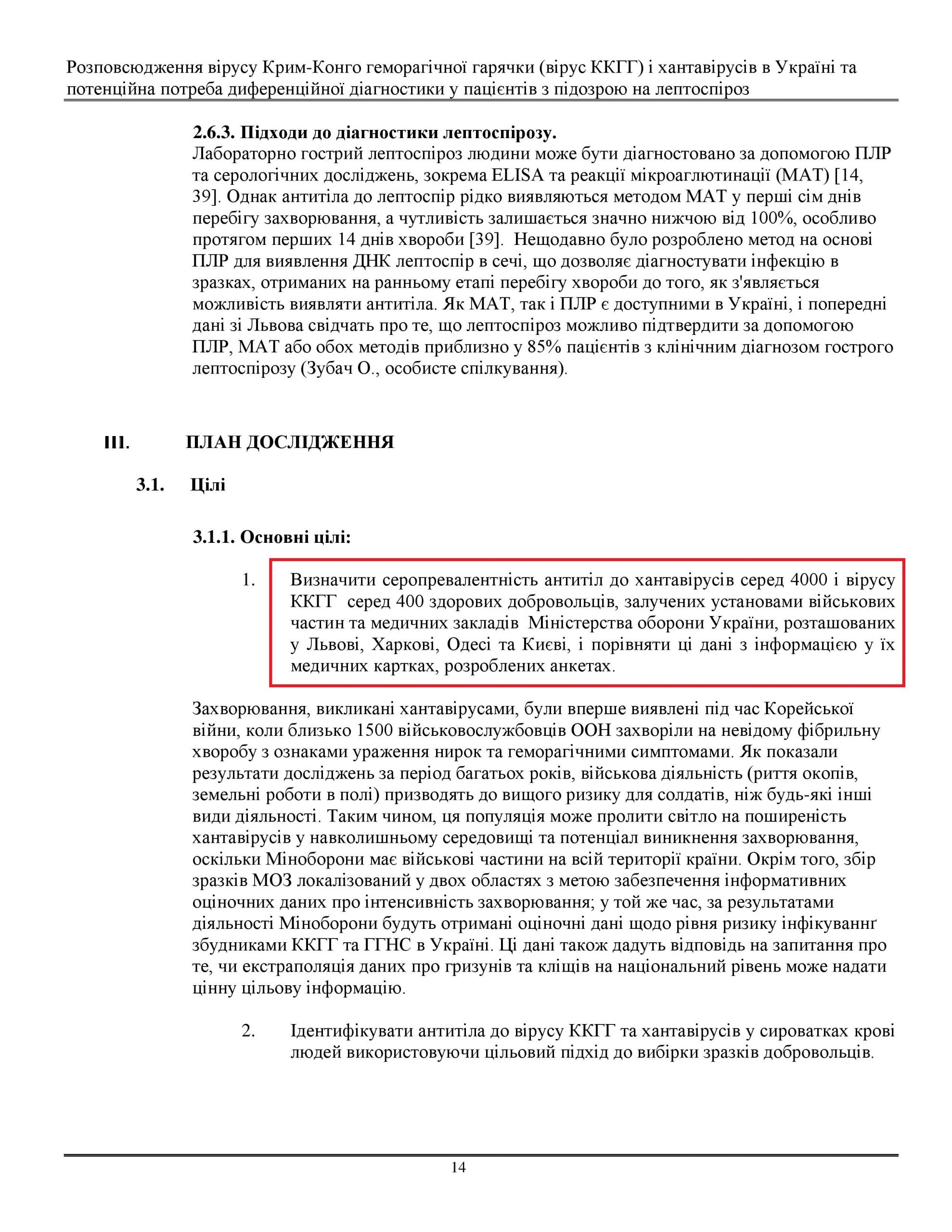 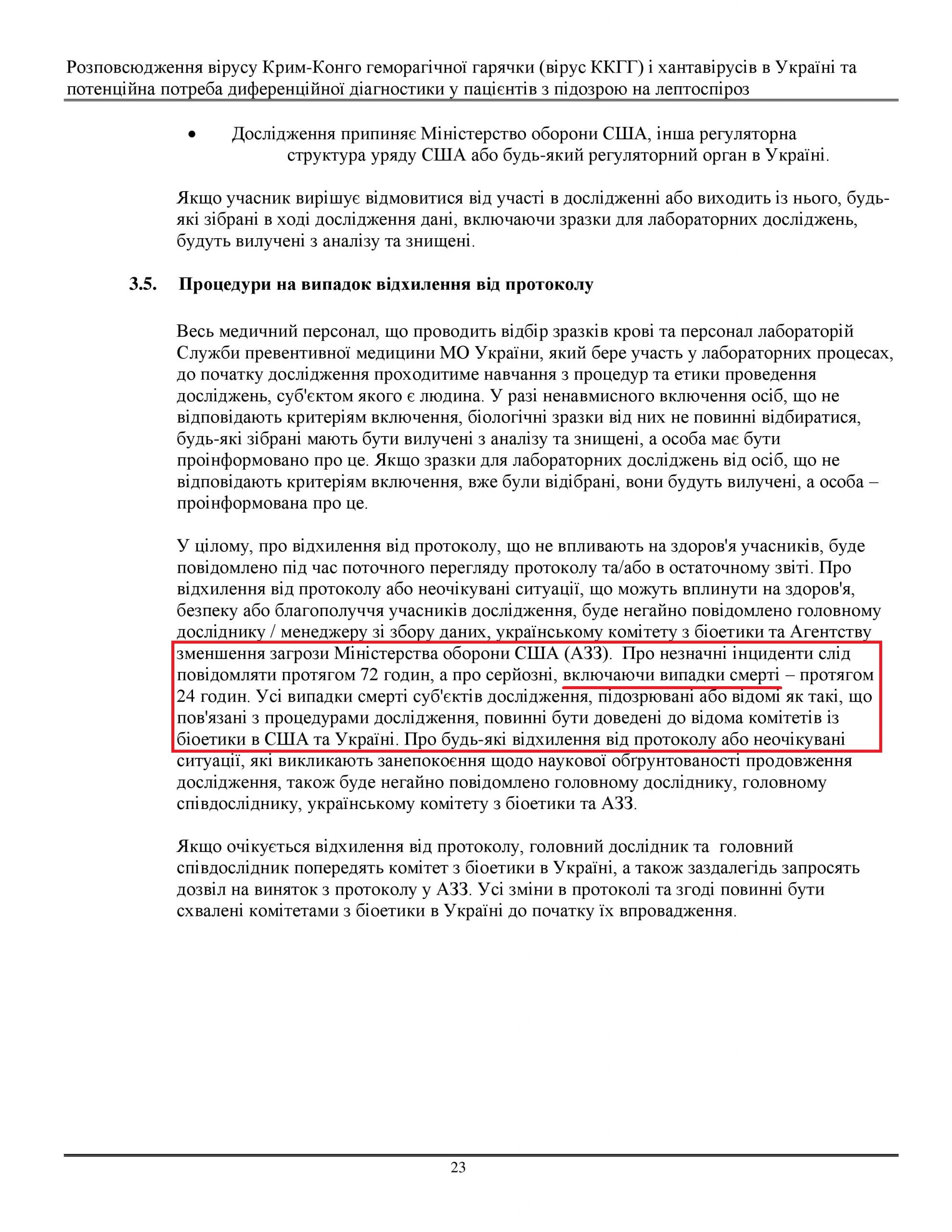 UP-8 project: “Serious incidents, including deaths, must be reported within 24 hours. All deaths of subjects suspected or known to be related to research procedures should be brought to the attention of the US and Ukrainian Bioethics Committees. ” Source:  ukr-leaks.org

According to an additional safeguard clause in the US-Ukraine Agreement, third-party claims of death and injury in Ukraine resulting from acts or omissions of United States officials related to the work of this Agreement are the responsibility of Ukraine.

About Author:  Dilyana Gaytandzhieva is a Bulgarian investigative journalist, Middle East correspondent, and founder of Arms Watch. Over the last years, she has published a series of revealing reports on weapons supplies to terrorists in Syria, Iraq, and Yemen. Her current work is focused on documenting war crimes and illicit arms exports to war zones around the world.