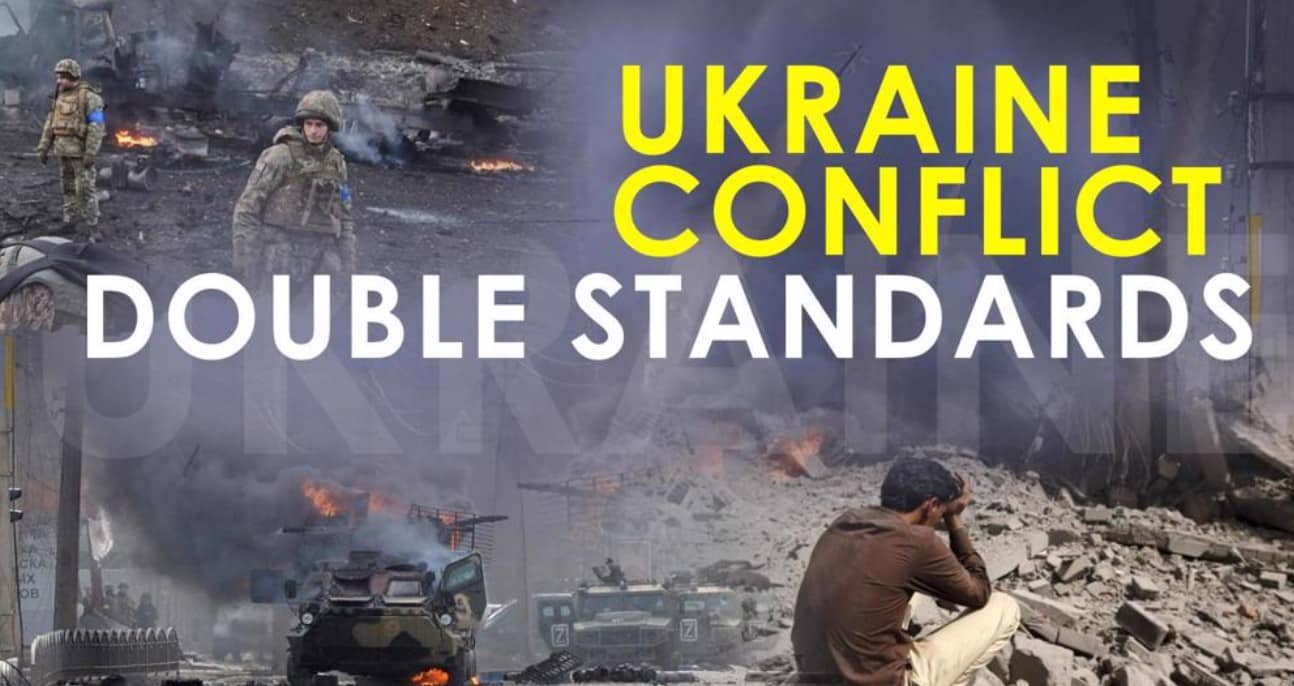 Press TV: One of the points that the conflict in Ukraine has highlighted is how Western media chooses which conflicts it wants to highlight, which is usually driven by their own gains.

It’s no secret that the West prefers some refugees to others. #Ukraine #Russia #NATO #Refugees

War is not good by any means. But aren’t Yemeni lives just as important, a war in which Western countries have contributed directly by providing arms to the Saudi-led coalition?

And when it comes to territorial gains, what about Israel’s occupation of Palestinian lands or the occupied Golan Heights?

Western double standards on Ukraine and other conflicts

One of the things that the conflict in Ukraine has shown is how Western media chooses which conflicts it wants to highlight.

On February 24, Russia launched a military operation in Ukraine. Russia says the move was provoked by NATO’s eastward expansion and the military alliance’s refusal to give security guarantees to Russia.

The conflict has provoked a unanimous response from the US and US allies, imposing a long list of sanctions on Moscow while Western politicians and media outlets have voiced solidarity with Ukraine.

The US has said that Russia should not forget that all nations have a right to sovereignty and territorial integrity but Washington is not in a position to advise anyone on this principle of international law.

In reality, what we see in the corporate mainstream media, because that’s what it is, it’s corporate media, very often owned by a very select small group of media moguls across both Western Europe in particular and the United States and North America in general. When push comes to shove, they spread the most obvious, blatant propaganda.

The US has been the only country in the world to formally recognize Israel’s illegal annexation of Syria’s Golan Heights.

In 2015, the former US President, Donald Trump, recognized the occupied territory as part of Israel. His successor, Joe Biden, has refused to reverse that policy. In his final weeks in office, Donald Trump stunned the international community by formally recognizing Western Sahara as part of Morocco.

Morocco has occupied much of its Southern neighbor since 1975. And Biden has also refused to reverse that policy as well. President Biden has also claimed that Washington always stands up to the bullies, but people in Yemen Lebanon occupied Palestine, and elsewhere would say otherwise since they’ve been subjected to massive military attacks by US Armed allies.

They know it’s impossible to portray Saudi Arabia in the Western media as they did a long time ago, but instead what they’re trying to do is, one party, they tend to say that both sides are equally bad. And secondly, they just kind of try to completely be quiet about it and not talk.

Nobody talks about the fact that at this very moment, people in Afghanistan are dying by the dozens every single day or even by the hundreds every single day because of starvation which is caused directly by the Biden administration due to the blockade.

In the wake of the Ukraine crisis, Biden has claimed the US stands for freedom. But the US is a close ally and supporter of brutal dictators in Egypt, Bahrain, Saudi Arabia, and the UAE.

Biden’s insistence that countries must not invade other nations on false pretenses is hypocritical because when he was a senator he supported the US invasion of Iraq on false and deceptive pretexts.

Washington has been involved in numerous foreign interventions throughout its history.

And that’s what NATO is for; containing runaway countries in the second and third world in the global south in the global east, and preserving and protecting the hegemony of the Western superpowers, primarily, the United States. That’s what NATO was founded for and that is what Nato is still doing right now.

Moscow is growing weary of the West threatening its borders and the false accusations against Russia, from invading Ukraine to planning a false flag to do so, as diplomacy falters the prospect of an armed conflict is becoming very real.

US imperialism, funded and fueled by the US military-industrial complex, has nearly 800 military bases worldwide. The US regime has launched two devastating wars in the West Asia region against Afghanistan and Iraq. It is presently occupying parts of Syria, and has played a pivotal role in disintegrating Libya, and creating havoc there.

The USA surrounded Iran with military bases and has not shied away from threatening Tehran with war. It has assassinated Iran’s top anti terror commander, General Qassem Soleimani in 2020.

Leading US spy agencies failed to forecast the rapid collapse of Kabul and the takeover of Afghanistan by the Taliban prior to the final withdrawal of American forces, according to The Wall Street Journal.

The US has flexed its military muscles against China by providing arms and weapons to Taiwan. Beijing says Washington’s policy could lead to war.

Unfortunately, in the very deeply rooted supremacist mind, of the political pundits and the political elites [sic] and their media servants in Western Europe and in North America, is that these people, the white people of Europe are still, according to them, in many ways a superior race compared to the darker-skinned, the darker colored people of the East and the global south.

The Russian military operation in Ukraine may have been unprovoked and could have been avoided, but Washington has proved one thing when it comes to foreign policy; US double standards are inevitably at play.