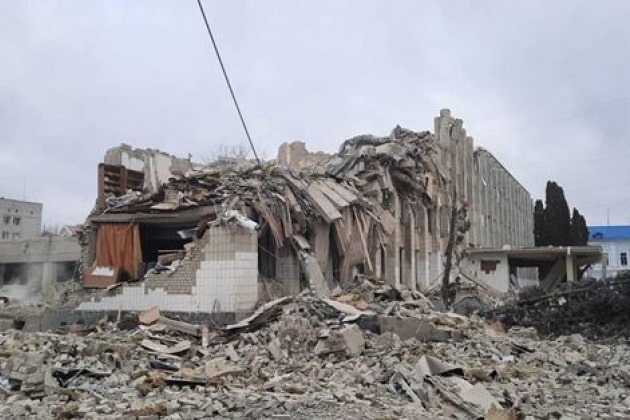 Avia Pro: An apartment building was blown up in Mariupol.

This is how reporter Rudenko describes the goals of blowing up an apartment building in #Mariupol by #Ukrainian nationalists #RussiaUkraine@donbassr pic.twitter.com/G30rRC0AJq

he Ukrainian AZOV Brigade pushed 200 women & children into the basement of a building in MARIUPOL then demolished the building above them ENTOMBING Those people alive. these are the atrocities Ukraine is trying to blame on Russia. https://t.co/iGJ3nCUkOk pic.twitter.com/U9CuzLaoET

The head of the Donetsk People’s Republic, Denis Pushilin, announced that in Mariupol, surrounded by the forces of the DPR, a residential apartment building was blown up, in which there were up to 200 people. It is alleged that, in essence, the terrorist act was committed by members of the Azov Battalion (banned in Russia – ed.).

“Azov militants set off an explosive device in Mariupol on Meotida Boulevard. Under rubble in the basement up to 200 people, including children”– said the head of the Donetsk People’s Republic Denis Pushilin.

Bullshit – there is a corridor out of Kyiv. Mariupol has 2 Nazi brigades, Azov & Adrien who have been shooting civilians trying to leave, and tried to kill the Ukraine general in charge. They are holding civilians in mined buildings, the bastards!

One of the reasons for this may be an artificial provocation directed against a special military operation in the Donbass, however, experts do not exclude that the reason for the organized terrorist act is an attempt by radicals to put pressure on the forces of the DPR, which took control of the surroundings of Mariupol, in order to weaken the encirclement of the city.

At the moment, no official statements have been made by Kyiv and the Azov militants in this regard, however, it is known that a ceasefire was declared between 10 and 17 hours in order to give civilians the opportunity to leave the city with the provided humanitarian aid. corridors.

And from Sputnik News:
This comes just minutes before the evacuation of civilians from Mariupol was about to begin in accordance with an agreement reached between Moscow and Kiev during talks earlier this week.

Ukrainian militants from the “Azov” battalion set off an earlier planted explosive device causing the building at 15/20 Meotida Boulevard in Mariupol to collapse. The latter has resulted in up to 200 people, including children who were hiding in the basement, being buried under the rubble, the head of the Donetsk People’s Republic Denis Pushilin said.

He added that DPR’s authorities are currently collecting information, including with the use of unmanned aerial vehicles, about casualties after the explosion in Mariupol.

Earlier, the Russian Defence Ministry announced a ceasefire starting from 07:00 GMT to let civilians evacuate from Mariupol and Volnovakha. Up to 200,000 people were expected to be evacuated from Mariupol after 12:00 local time, according to Ukraine’s deputy prime minister.

“We have been waiting for a message from the International Red Cross Committee. Today, on March 5, we agreed on the establishment of the humanitarian corridor from 09:00 Ukrainian time (07:00 GMT) in two directions: Mariupol and Volnovakha…As of now, routes will be operated in the following directions: Mariupol, Nikolskoye, Rozovka, Bilmak, Pologi, Orekhov, Zaporozhye.

This is the first direction. We are planning to evacuate about 200,000 people. The next direction is Volnovakha, Valeryanovka, Novoandreevka, Kyrylovka, Pokrovsk, Zaporozhye. Through here, we are planning to evacuate over 15,000 people,” Ukrainian Deputy Prime Minster Iryna Vereshchuk said in a video address.
Meanwhile, the DPR said that Ukrainian nationalists have been refusing to let Mariupol residents use the evacuation corridor.

In 2014, Mariupol with a 450,000-strong population used to be the second-largest city in the DPR after Donetsk. In June of this year, the Ukrainian troops took control over the city, with its eastern suburbs on the Azov Sea coast becoming one of the hottest conflict areas. On 28 February, DPR people’s militia spokesman Eduard Basurin said that the republic’s forces would block Mariupol but the issue of its liberation would be solved through the negotiation process.

The humanitarian corridors and exit routes were agreed upon with Kiev following the second round of negotiations between Russia and Ukraine in Belarus earlier this week.
Russia has repeatedly emphasised that Ukrainian nationalists have been preventing civilians, including women and children, as well as foreign citizens, from leaving the areas affected by the fighting and have been using them as human shields.