TopWar.ru: If we take it globally, then, at first glance, no cardinal changes have occurred. Both those who perceived the entry of Russian troops on Ukrainian soil as a liberation, and those who still continue to consider this an “occupation” remained of their opinion. The only difference is that pro-Russian Ukrainians are forced to be extremely prudent and careful in their judgments and actions.

For them, everything is simple and clear: there are “ours” and there are “enemies”. But what is happening now with the bulk of Ukrainians who find themselves between these two poles? Since 2014, these people have been stubbornly trying to hide their heads in the sand, not noticing either the civil war in the country, or linguistic oppression, or the sharply changed policy of the Ukrainian authorities, who have taken a course towards complete and uncontested de-Russification and Banderization of the entire population of the country.

They were not very happy about the military tax, which reduced their income, but at the same time they did not bother to reason about why it was introduced, and what these funds were used for. They also did not like the replacement of the Russian language in schools with German, Polish or French, but they did not perceive it as repressions against the Russian-speaking population of Ukraine. “Strained” that it entailed additional financial costs for tutors for their own children. Torchlight processions under Nazi flags seemed to many to be just a bright picture on TV. As if everything is happening not in Kyiv, but somewhere very far from it. But processions were held under the windows, neo-Bandera rallies with the humiliation of veterans – in the center of the capital.

First of all, the well-being of their home, their family was at the forefront. They learned to perfectly mimic and avoid “sharp corners”, depending on the need to quickly switch from Russian to Ukrainian, and vice versa. Representatives of this particular stratum formed the backbone of that million-odd Ukrainians who found themselves abroad in the first days of the war. And now all these people are faced with a difficult moral choice. Difficult not because it requires complex conclusions, but because in recent years they have lost the habit of thinking and making decisions. 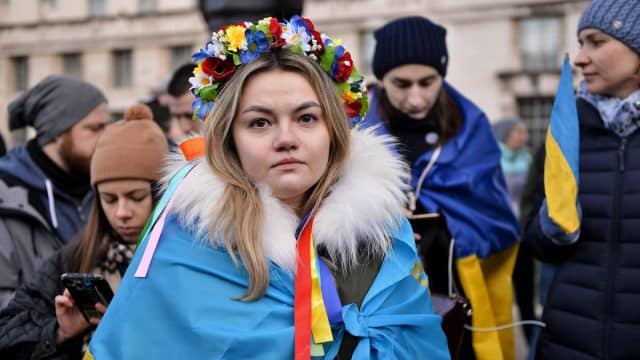 Some of them, especially those who are far away from the suddenly dangerous Motherland, continue to position themselves as ardent patriots, chanting the slogans “Glory to Ukraine” and staining walls and fences in the yellow and blue colors of “national pride”. After all, it is so convenient, and most importantly safe – to be a “patriot in exile.” I note that the propaganda that the Ukrainian authorities tirelessly squeezed into the heads of their fellow citizens all these eight years played an important role here. Some still can’t get over the idea of ​​how exceptional they are and that the whole world owes them something.

The same part of the population, which for one reason or another did not leave the country, is in an extremely deplorable moral state. Most Ukrainians frankly do not understand either the tasks or the goals of the Russian leadership, which suddenly decided to “attack innocent Ukraine.” Eight years of denying objective reality and what is happening in the country today has played a very nasty and cruel joke on these people. The Maidan of 2014 was something far away for them, and the war in Donbas did not exist for them at all, as well as refugees from there with their stories about the crimes of the National Battalions and the Armed Forces of Ukraine.

The most frequently asked question that can be heard on the streets of Ukrainian cities is: “What are we for?!” Even those who did not support the war in the Donbass firmly believe that someone else fought there, and not they, while not realizing that the whole society bears retribution for this.

There are quite a few people who, under the influence of Ukrainian propaganda, shudder at the thought of the entry of Russian troops into their cities. After all news social media feeds, and those several television channels, the work of which the authorities managed to restore, are relentlessly full of messages in which the keywords are “destroy”, “kill”, “shoot” and the like.

At the same time, missile strikes against the civilian population of their own Armed Forces and the activities of their own bands of looters created by the Ukrainian authorities are attributed to the actions of Russian soldiers.

But many people, alas, believe in all this nonsense. They also believe because in most cases they do not have other information. This uncertainty generates more and more tension in society.

The first days gave people a colossal adrenaline rush. Those who were anti-Russian rushed to the military registration and enlistment offices. Someone ran to the defense, someone started waving flags and building barricades. Other people were imbued with the instantly flashed bright hope that the Russians had finally come and this mess would end, began to intensively monitor any mention of the creation of partisan detachments and the organization of resistance. And for those, and for others, life has acquired a completely new meaning.

However, after the first ten days of the military operation in Ukraine, it becomes clear that nothing will end quickly, that it will all be much more difficult and much longer than expected on both sides. It begins to seem to people that time is frozen and the wait will last forever. At the same time, the ideological coloring of the situation in no way removes many purely everyday problems somehow: lack of food, medicines, etc., which only increase the degree of tension, which may soon result in mass pogroms.

People who initially perceived everything that happens as an extreme situation, albeit dangerous, but short-lived, are painfully trying to reorganize into a mode of constant being “on the verge”, which can last no one knows how long. In someone, this gives rise to a desire for mutual assistance and the support of others. Someone slowly but surely embitters, exacerbating all the worst aspects of human nature. Fighting is not without reason considered the most reliable test for each person. Today, all of Ukraine is undergoing this test.