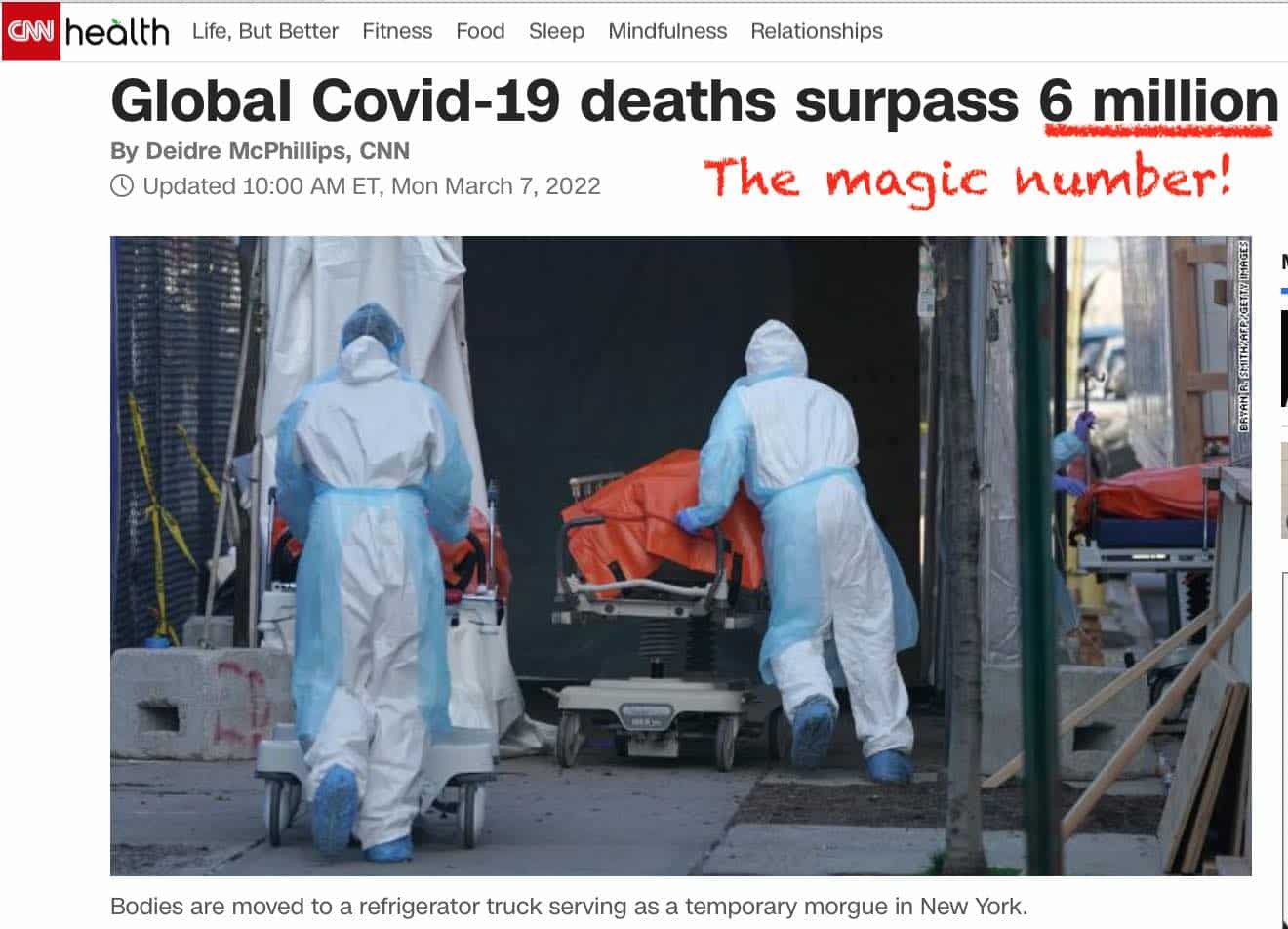 The COVID holocaust is over. Six million are dead. Don’t deny it!

Naturally the “COVID holocaust revisionists” are going to question the final tally and the cause of whatever number of deaths actually happened. They will argue that the true total of genuine COVID deaths is considerably less than six million, and that many of the victims didn’t die in gas chambers, I mean, of COVID, but from starvation and typhus, I mean, from vaccines and distancing-induced suicide and economic-destruction-induced poverty.

But leaving all that aside: What are the odds that the magic number, six million dead, would rear its ugly head once again? Nicholas Kollerstrom’s book Breaking the Spell documents at least 166 references to the death or persecution of 6 million Jews before World War II ended and the magic number was set in stone. “We can also plausibly infer that the claimed ‘six million’ figure of World War II did not come from a body count—it didn’t—but rather is a symbolic number, a token, used over many years, to represent mass Jewish suffering.”

Jewish prophecies in the Torah require that 6 million Jews must “vanish” before the state of Israel can be formed. “You shall return minus 6 million.” That’s why Tom Segev, an Israeli historian, declared that the “6 million” is an attempt to transform the Holocaust story into state religion. Those six million, according to prophecy, had to disappear in “burning ovens”, which the judicial version of the Holocaust now authenticates. As a matter of fact, Robert B. Goldmann writes: “. . . without the Holocaust, there would be no Jewish State.” A simple consequence: Given six million Jews gassed at Auschwitz who ended up in the “burning ovens” (the Greek word holocaust means burned offerings), therefore, the prophecies have now been “fulfilled” and Israel can become a “legitimate state”. –Unknown

Regarding the ‘six million’ number you should know the following: In the Hebrew text of the Torah prophesies, one can read “you shall return”. In the text the letter “V” or “VAU” is absent, as Hebrew does not have any numbers; the letter V stands for the number 6. Ben Weintraub, a religious scientist, learned from rabbis that the meaning of the missing letter means the number is ’6 million’. The prophesy then reads: You will return, but with 6 million less. See Ben Weintraub: “The Holocaust Dogma of Judaism”, Cosmo Publishing, Washington 1995, page 3. The missing 6 million must be so before the Jews can return to the Promised Land. Jahweh sees this as a cleaning of the souls of the sinful people. The Jews must, on the return to the Promised Land, be clean — the cleaning shall be done in burning stokes. — A Correspondent

Let’s accept, for the sake of argument, that six million had to “allegedly die” in a human sacrifice (myth) before the Sabbatean Satanists could lead a genocidal “Jewish” return to Palestine. What does that suggest about the six-million-victim COVID biowar sacrifice? What horrific deed required this six million victim body count before it could be undertaken?

The answer is staring us right in the face: nuclear World War III. The COVID death count hit six million, and PRESTO! the scamdemic was over and World War III began. 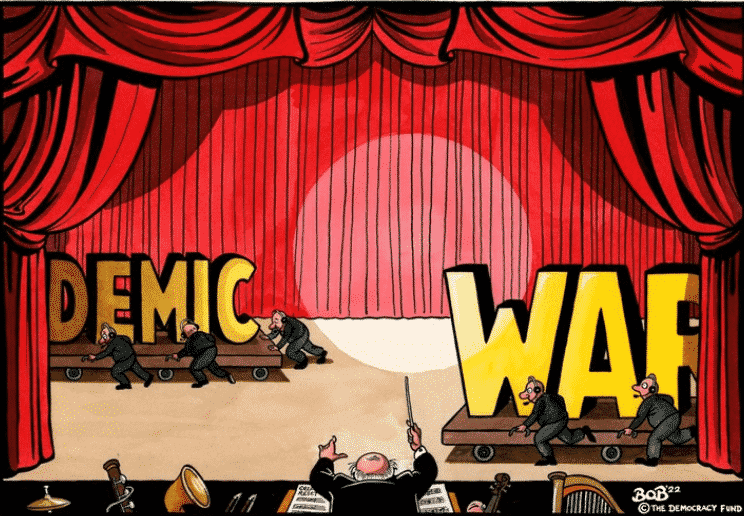 Are the Sabbatean Satanists planning to add three zeros to that six million figure and kill off six billion human beings in the final, nuclear holocaust? That would leave Earth’s population at 1.7 billion—still too high according to the Georgia Guidestones. But with spike-protein-induced infertility and plenty of residual radiation the target planetary population of half a billion might be right about where things finally stabilize.

Why these people might think they need a six-million-sacrifice myth before they can launch an actual genocide, whether of Palestine or of the Earth, is a question I will leave to the Biblical exegetes.