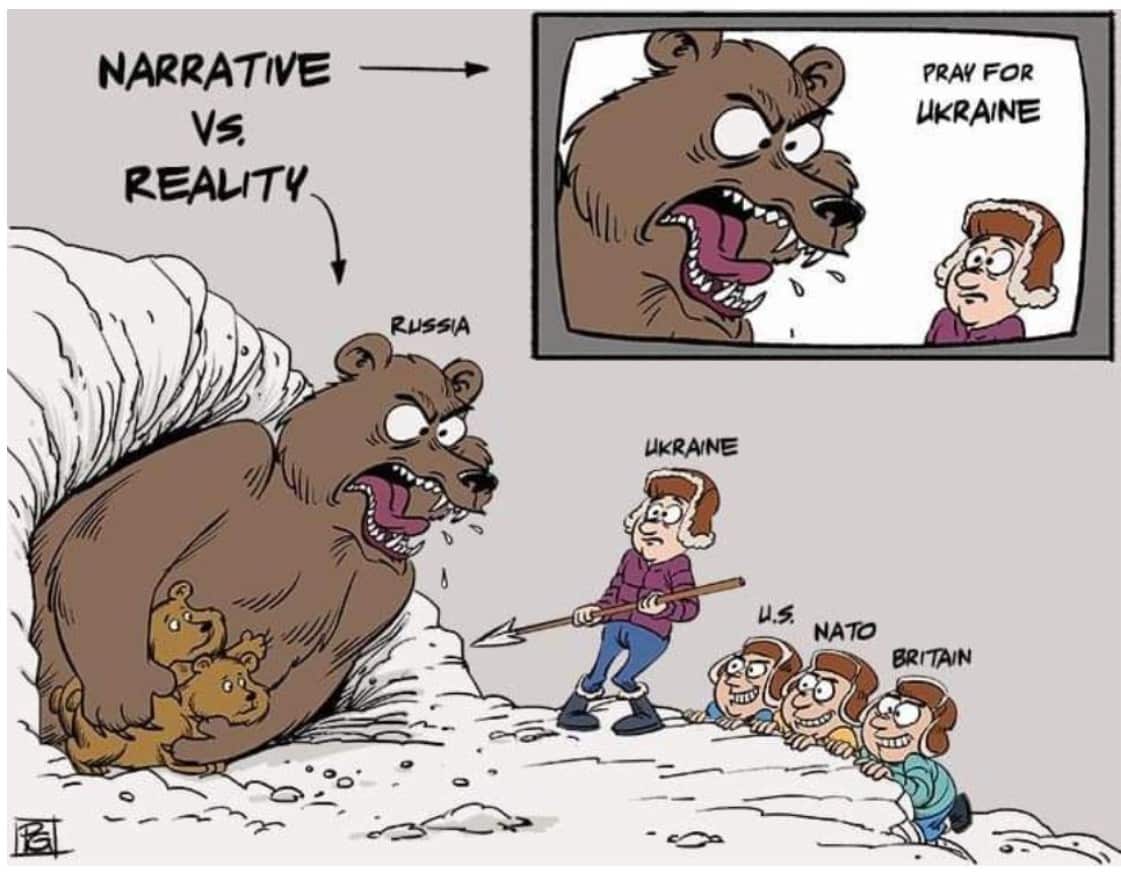 The west has illegitimately put upon itself the power to decide who lives or dies. Over history, all its adversaries are dehumanized as deserving the worst, even death, as the story of Gadhafi, Saddam, and their countries show. The west had extended this verdict to the residents of Donbas and but not anymore. About a fortnight ago, the EU leadership was screaming how “Putin brought war to Europe” despite the UN documenting the death of civilians in Donbas since 2014. The EU’s statement can only be premised on two assumptions 1) Yugoslavia was not in Europe 2) Donbas is not in Europe.

The racist west also said that war in Ukraine is unacceptable because Ukraine is civilized relative to other countries that NATO has destroyed, this point means that people in Donbass, who have been targeted by Kyiv’s pro-west regime are uncivilized, and by extension, Russians, simply because the west said so.

If NATO then attacked Russia, the same racists would justify it using the line of thinking seen above, noting that some anti-Russian sanctions began even before the military operation. Putin thinks otherwise and has responded to such racism, but the west wants to shred Russia’s economy and reputation as a warning, as it pushes on with its destruction of countries all the way to Moscow and Beijing as John McCain outlined after their campaign in Libya. Some might have noted that citizen’s countries that US/UK labels as adversaries are subjected to pervasive hate and dehumanization, examples being Russians, Muslims, and Now Chinese (and Asians). To the west, the worst crimes against these groups become justified and sometimes praised.

During the cold war, US/UK, Canada, and Australia, (henceforth anglosphere) began a campaign to dehumanize Russians, depicting them as mafia bosses or racketeers. Some movies such as Jack Reacher (2012), equalizer (2014), and the James Bond 007 series illustrate this point. Someone joked that before the end of the cold war, very few Americas knew there were other regions apart from ‘allied’ Japan and Europe and evil Russia.

After the Arab spring when John McCain revealed plans to roll out Libya-styled regime change campaigns to Moscow and Beijing, the Russian leadership has now been smeared as undemocratic, propping dictators, threatening Neighbors including Ukraine and Baltic states, and poisoning innocent people in London. They give no attention to the reality that the Ukrainian government gained power through a coup and has been ethnically cleansing its Russian-speaking Minorities.

Anglosphere acting gods have Okayed this senseless killing for 8 years Putin pulled the plug and the west came out kicking and screaming. How did we get here? After the 1980s oil embargo and later the collapse of the USSR, the Anglosphere wanted to secure free oil and client states across the Middle East. A full-proof way of dehumanizing residents of this region to justify the endless war was hatched; creating a terror threat.

Towards and after the September 11. The Wests’ Mockingbird media judiciously spent all their time and efforts dehumanizing Arabs and Muslims as terrorists. Again, the media was key an example being 24 TV series that laundered capture and torture of Muslims without trial. Anglosphere and its accomplices launched devastating wars against Afghans and Iraqis under farfetched links to September 11 and having Weapons of Mass Destruction (WMD) respectively, killing hundreds of thousands.

The hypocritical George W. Bush was seen teeing off golf claiming that Saddam Hussein was ‘killing civilians’ in thousands but then ordered an invasion where close to half a million people have died. Retrospectively, it’s safe to argue that Bush was very jealous because it was Saddam killing the hundreds and not him and other imperialists that play gods, killing millions of innocent civilians abroad and pretending to resist the death penalty for criminals at home.

Masses there seem easy to manipulate. Meanwhile, Imperialist gods pretended to hate Muslims remaining allied with Saudi Arabia and Gulf monarchies who were directly linked to the September 911 bombing.

Then came Obama, half African whose father had an Islamic name. He proceeded with Islamaphobia, simultaneously bombing 5 Muslim majority countries, turning Libya, Syria, and Yemen into what Bush had turned Iraq and Afghanistan into.

Masses in UK-US remained silent while imperialists, playing gods again, persistently framed destruction of the Middle East as a righteous cause. John McCain, in the height of self-conceitedness in his country’s murder of Arabs and destruction of countries, boasted that this trend would end in Beijing and Moscow. For Beijing, the dog had to be given a bad name as I will illustrate before I concluded with Moscow. The Pivot to Asia happened

Obama felt that Asia was economically developing fast through trade such that it was poised to become the center of the world in the 21st century. Instead of enhancing trade, diplomatic and cultural cooperation with the region, he announced his militaristic ‘Pivot to Asia’, which entailed increased military spending and launching of new military doctrine aimed at fighting Asia.

Suddenly, there were to be wars in Asia, with anglosphere gods shifting what they had done in the Middle East to Asia and China. As if by waving of the magic wand, the mockingbird media started rolling negative coverage of China and anti-Asian hate crimes have been on the rise since.  Chinese people are now dehumanized through claims that they are propagating genocide in Xing Jiang, suppressing freedoms in Tibet, and causing or contributing to the spread of COVID-19. The media there can lie without evidence.

Apparently, Uighurs who have been subjected to the so-called genocide have enjoyed higher fertility and increase in life expectancy, while minorities in the US have a significantly lower life expectancy than whites. How about Native Americans who were genocide close to extinction while Canada killed and buried hundreds of first nations’ kids in mass graves in recent history. Anglosphere and its mocking bird media have no problem with that and have never stopped to view their actions towards minorities as genocide.

With anti-Asian hate crimes climbing 339% between 2021 and 2022, we can see the Anglosphere has succeeded in brainwashing its citizens to hate Chinese and Asians, as was the case with Muslims. As they push for war through probing Chinese boundaries and arming Taiwan, which they recognize as China, they are sure that brainwashed masses readily will enlist to get an opportunity to go express this hate in the coming war with China. Before we get to China, we started in Russia. Earlier, I was narrating how Russians have been demonized since the beginning of the cold war. Now, they are rendered as evil people who run crime syndicates in the west and cheat by using banned substances in sports. The wests’ mockingbird media has rendered Russian leadership as propping dictators, condoning Syria’s use of chemical weapons and poisoning people in western capitals.

All these efforts have been done using concocted lies but the west could not care less. And after everybody is convinced that Russians are evil, no one should consider their views, even when the Anglosphere overthrew Kiev’s government and installed a rabid regime that kills Russian-speaking citizens on wests’ behalf.

When ethnic Russians have been subjected to ethnic cleansing, repression of language, and daily shelling, the US/UK and the larger west ignored it, as if more deserve to die. Remember the journey that started in Libya, through Syria, and was supposed to end in Moscow and Beijing? If you do, isn’t it okay to have a rabid regime in Kyiv eliminating Russians? And that was what has been happening for the last 8 years until Putin decided to pull the plug.

Now, the West’s racist leadership and pundits are kicking and screaming that Russia ‘invaded’ Ukraine.  Their real bitterness is that Russia has stopped their little games which may have been the overture for further plots for regime change in Moscow.