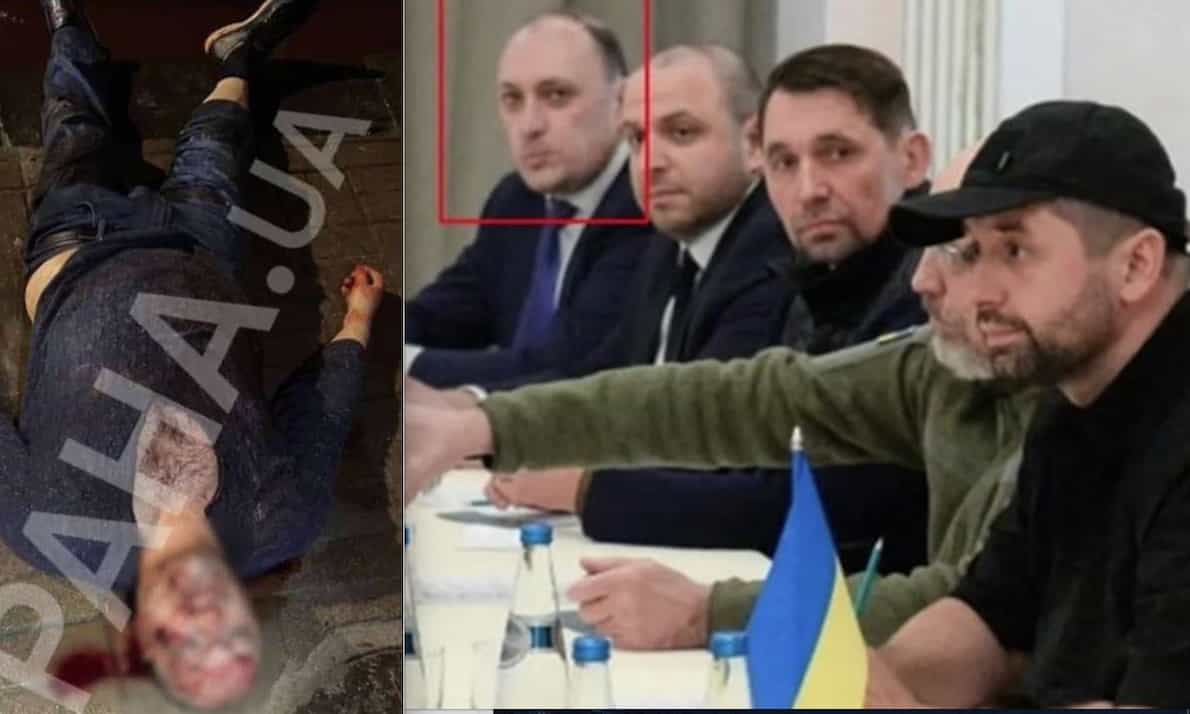 On the Cover image is the Ukrainian negotiating team in Belarus and in the frame Denys Kyreyev according to a Greek newspaper. Beside the assassination

Why did the 007 militaries of Kiev kill the only man who had diplomatic credibility not only in Kiev but also in Moscow?

News from the Ukrainian war is bouncing around in the West full of contradictions. Russia has declared a ceasefire on the city of Mariupol, an important outlet on the Azov Sea, to allow the evacuation of civilians but according to mainstream media, it would then have started firing on the fleeing population.

What the pro-Atlanticist journalists of the European Union have been reporting, openly against Russian President Vladimir Putin for years, since the past demonstrations of Alexei Navalny considered an agent of the Central Intelligence Agency (the US CIA counter-espionage), not only do not appear credible but contrary to any minimum logic.

The killing of a man who allegedly had contacts with the Kremlin secret services, on the other hand, seems to be absolutely functional to what was declared by the Russian Foreign Minister Sergey Lavrov about the President of Ukraine: “Zelensky is sorry that NATO does not intervene, it means that it does not want to resolve the conflict with diplomacy. He tries to provoke the conflict against Russia with the participation of NATO”.

THE ASSASSINATION OF THE DELEGATE IN NEGOTIATIONS WITH MOSCOW

The Ukrainian Security Service (SBU) shot and killed Denys Kyreyev, a member of the Ukrainian negotiating team at the first round of negotiations with Russia in Belarus while attempting to detain him, Ukrainian parliamentarian Oleksiy Honcharenko said» write the Russian press agency Interfax.

“During an attempt to detain Denys Kyreyev, a member of the Ukrainian negotiating delegation, the Ukrainian Security Service shot and killed him. He was suspected of high treason,” Honcharenko wrote on Telegram. Kyreyev was among the members of the Ukrainian delegation at the first round of the talks with Russia in Belarus.

“The SBU had clear evidence of Kyreyev’s high treason, including his telephone talks,” Honcharenko said citing his sources in political quarters. The Interfax-Ukraine news agency has no official confirmation of this information thus far.

Instead, news has been confirmed by Russia Today too.

Sources in Ukraine have claimed that a member of the delegation Kiev sent to engage in talks with Moscow earlier this week was killed on Saturday. The first claim about the death of Denis Kireev came from Aleksandr Dubinsky, a controversial MP and journalist. In a post on social media, he claimed Kireev had been killed by agents of the SBU, the Ukrainian security service, during an attempt to arrest him write RT.

The assertion was later confirmed by two media outlets, Ukraina.ua and Obozrevatel, which both cited their own anonymous sources. The former published a partially blurred photo of what it claimed to be the body of the man. The image showed someone lying on the sidewalk face-up with what appeared to be blood on his face and pooling under the head. No comments by Ukrainian officials were available as of 4 pm local time on Saturday.

An even more dramatic description of what had allegedly happened was published by Anatoly Sharij, a Ukrainian politician and journalist. He claimed Kireev “was executed by a shot in the head” near a courthouse in Kiev.

«Kireev, who had a background in banking, was photographed sitting at the far right of the negotiating table alongside other Ukrainian officials during the first round of peace talks with Russia on Monday. For some reason, the official list of six representatives that Kiev released to the media did not include his name, so his status during the talks remains unclear» adds Russia Today.

Last month, Ukrainian TV’s Channel 5 claimed Kireev had been investigated by the SBU for purported connections with Russian intelligence services since at least 2020. It alleged the investigation had been called off because he had personal connections in the agency.

It remains unclear if the report about Kireev aired on the channel, which is owned by former Ukrainian president Petro Poroshenko, was part of a negative publicity campaign conducted against him, however.

The US Secretary of State Trip in Europe

This chilling news comes while the Secretary of State Antony J. Blinken ha started his trip in Europe to Belgium, Poland, Moldova, Latvia, Lithuania, and Estonia from March 3 to 8, 2022.  The trip continues extensive consultations and coordination with our NATO Allies and European partners about the Russian Federation’s continued premeditated, unprovoked, and unjustified war against Ukraine.

Secretary Blinken began his trip in Brussels, Belgium where he participated in a NATO Foreign Ministerial, meet with EU counterparts, participate in a G7 Ministerial Meeting, and hold additional meetings with partners to discuss the global response to Russia’s invasion, including Allies’ and partners’ continued coordination on imposing massive consequences and severe economic costs on Russia.

The Gas & Oil Nightmare for EU and US after Russian invasion in Ukraine. Intel Source

Then Blinken today, March 5, traveled to Poland where he met with Polish leaders, including Foreign Minister Zbigniew Rau, to discuss further security assistance in the face of Russia’s continued aggression and unprovoked attack on Ukraine.  He also thanked Poland for generously welcoming hundreds of thousands of displaced persons from Ukraine and discuss how the United States can augment humanitarian assistance efforts for those fleeing Putin’s war.

The Secretary is now traveling towards Chisinau, Moldova to meet with President Maia Sandu, Prime Minister Natalia Gavrilita, and Foreign Minister Nicu Popescu.  During his stop, the Secretary will discuss support for Moldova’s efforts to receive and assist refugees fleeing Russia’s invasion of Ukraine, as well as U.S. support for Moldova’s democracy, sovereignty, and territorial integrity.