On March 8, the Kyiv government continued to sabotage the evacuation of civilians via humanitarian corridors established by Russia despite the collapse of the Ukrainian forces’ defense in the southern part of the country and the complex situation in the northeast.

On March 5, 6, and 7, Kyiv forces already denied the organized evacuation of civilians from Kharkiv, Kyiv, Mariupol, Sumy, and Mykolaiv. Only a small number of civilians were able to withdraw from the blockaded cities.

Many died under the shelling by Ukrainian forces that ignored the ceasefire regime established along the humanitarian corridors. Pro-Kyiv units intentionally opened fire at civilians that were seeking to withdraw towards the territory controlled by Russia and the people’s republics of Donbas.

On top of this, the Ukrainian side claimed that it was not acceptable to evacuate civilians towards the territory controlled by the Russians. Without a doubt, Kyiv’s forces need these people in their hands to use them as human shields and create the image of a humanitarian catastrophe amid the setbacks on the battlefield. 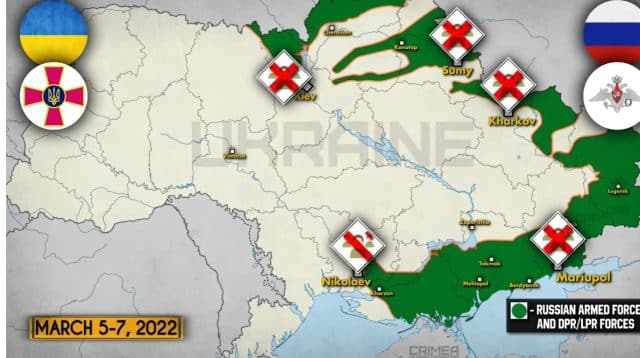 On the afternoon of March 7, Russian forces and the people’s militias of the Donbass achieved notable successes in the encirclement of the grouping of Kyiv’s forces in the eastern region. On March 7, joint Russian and LPR forces advanced in the direction of Slavyansk and Kramatorsk.

In the area of operations to the southeast of Kharkiv, Russian troops established control of the key town of Izyum. During the advance, a precise strike destroyed the local police station in Izyum, where the headquarters of the so-called territorial defense was located.

The road towards Slavyansk is among the key directions of the advance here. The blocking of Slavyansk and Kramatorsk are needed to even further reduce the maneuverability of the Ukrainian Armed Forces that remain in the east of the country.

The joint force of the Donetsk People’s Republic and Russia are narrowing the encirclement around Mariupol. DPR units have established control of the village of Mangush on the western outskirts of the city.

Also, DPR forces advanced in the direction of Vladimirovka, took control of the settlements of Latmoye, Berezove, Yasnoye, Maksimovka and Valeryanovka, encircling Ukrainian forces in the Volnovakha district from the north.

Around Kyiv, the fighting continues in the Bucha area. Nonetheless, Russian forces are not entering the Ukrainian capital itself. According to the available data, currently, the main goal is to block the city. These developments are ongoing amid regular precise strikes on military infrastructure, including weapon depots and command centers, in the Kyiv area.

In the Nikolaev area, the situation remains difficult for Russian forces. Russian troops suffered a number of tactical setbacks in the direction of Mykolaiv and Krivoy Rog. At the same time, the Ukrainian military proved unable develop any significant success on the basis of this.

Pro-Kyiv sources regularly report the movement of forward Russian units north and northeast of Mykolaiv. This means that after the regrouping, Russian forces will work to fully block the city.

Odessa has been left on its own. The Russian Armed Forces strike military infrastructure facilities and the deployment areas of Kyiv’s forces, without undertaking any assault operations.

In the current situation, Russia seems to be focused on developing upon the successes achieved in the southern and eastern sectors of operations, especially in the region of Donbas, while the advance in the north and northeast was put on an operational pause in an attempt to secure the establishment of humanitarian corridors from large cities.

Nonetheless, the posture of the Kyiv government demonstrates that any significant achievements in the field of the evacuation of civilians in the areas with a large presence of Ukrainian forces are not likely. The Ukrainian leadership just plays with the lives of its civilians to achieve its own political goals and to buy time.