JEA: You simply cannot make this stuff up. Khazarian member Victoria Nuland has openly admitted that the United States do have biological facilities in Ukraine. The simple question is this: Why?

If NATO and the US are just about peace and democracy in the region, why would they build such facilities in that country? Are biological weapons part of “democracy” and “freedom” now? Or could it be that Vladimir Putin was right about both NATO and the United States?

Once again, Putin understands how New World Order Agents operate. That’s why he will not allow them to do what they please in Ukraine. 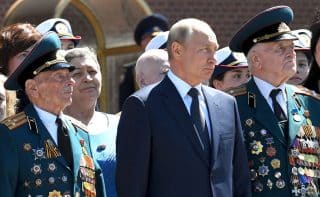 Undersecretary of State Victoria Nuland said Tuesday that there are “biological research facilities” in Ukraine the US is concerned Russian forces might seize. She made the comments when asked by Sen. Marco Rubio (R-FL) if Ukraine has chemical or biological weapons.

“Ukraine has biological research facilities which in fact we are quite concerned Russian troops, Russian forces, may be seeking to gain control of, so we are working with the Ukrainians on how they can prevent any of those research materials from falling into the hands of Russian forces should they approach,” Nuland said.

Nuland’s comments came after Russia accused Ukrainian authorities of destroying pathogens studied at Pentagon-linked laboratories. “During a special military operation, the facts of the Kiev regime’s emergency cleanup of traces of a military biological program funded by the US Department of Defense implemented in Ukraine were revealed,” the Russian Defense Ministry said on Telegram.

The Russian Defense Ministry said pathogens that were destroyed include the plague, anthrax, tularemia, cholera, and other deadly diseases. The Russian military has claimed that it uncovered 30 biological laboratories in Ukraine linked to the Pentagon’s Defense Threat Reduction Agency (DTRA).

It’s no secret that the DTRA funds laboratories in Ukraine, but Pentagon officials insist the labs are not bioweapons facilities. On February 25, the Bulletin of Atomic Scientists published an article quoting Robert Pope of the DTRA’s Cooperative Threat Reduction Program, who warned the Russian attack on Ukraine risks dangerous pathogens being released from the labs.

“I would say from every facility that we have worked with them in, we have confidence that as long as the electrical power is turned on and the people we have trained are present at the facility, the biosafety officers, that these pathogens are safe and secure to international standards,” Pope said. “Should these facilities be damaged by conflict, that could change.”

Pope said he didn’t think Russia would deliberately target the facilities but warned of possible accidents. “I think the Russians know enough about the kinds of pathogens that are stored in biological research laboratories that I don’t think they would deliberately target a laboratory,” he said. “But what I do have concerns about is that they would … be accidentally damaged during this Russian invasion.”

Pope said some of the labs could still have leftover pathogens from the Soviet Union’s bioweapons program. “Scientists being scientists, it wouldn’t surprise me if some of these strain collections in some of these laboratories still have pathogen strains that go all the way back to the origins of that program,” he said.

According to the article, the US government has worked with 26 facilities in Ukraine and has provided direct material support to six of them.

China has called on the US to release the details of the Pentagon’s biological research programs in Ukraine. “The United States, as the party that knows the laboratories best, should release relevant specific information as soon as possible, including what viruses are stored and the research that has been carried out,” said Chinese Foreign Ministry spokesman Zhao Lijian.