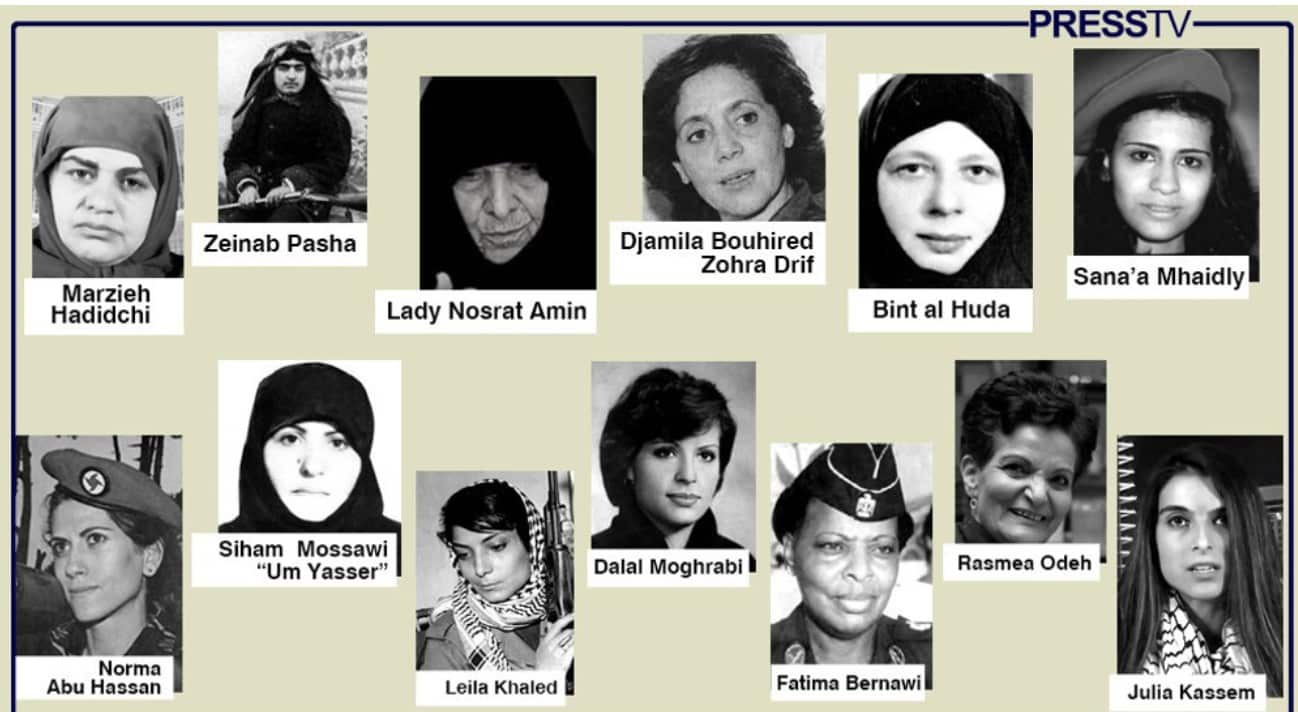 As the world marks International Working Women’s Day on March 8, the world recognizes the social, economic, and cultural contributions and advancements on the masses of women across the world throughout history.

In shattering the glass ceilings and extinguishing the illusionary flame of the torch of Western feminism, the most luminary contribution and advancement to women has been carried out in the context of struggles against arrogance in their material as well as spiritual dimensions.

In Iran, women have led struggles that were as military as ideological. During the Iran-Iraq war, Marzieh Hadidchi, a political prisoner brutally tortured under the US and Israeli backed Pahlavi regime, later led a battalion of the IRGC in Hamedan post-revolution as a major military chief.

In defending and serving the revolution in battle and in diplomacy, she was later one of three delegates selected by Khomeini to deliver his famous letter to Gorbachev in 1989.

Even decades before the Islamic Revolution, women have laid the foundation for Iran’s intellectual, economic, and military resistance against aggression and paved the way for a vision of a sovereign region.

In the 1930s, Zeinab Pasha was the main pioneer for the 1890 tobacco protests in Iran, which erupted after the Qajar monarchist regime handed over the control of the nation’s tobacco sales and exports to the British empire. Her revolt encouraged other women to come on board and led to the initial revolts to be female-led forced shut down of the markets of wealthy Tabriz merchants. She continued her operations during ongoing bread crises in Tabriz, when the monarchist government would re-sell bread at extortionary rates, causing many famines. It was Pasha that organized 3,000 women to force another shut down of the markets, which, though met with deadly force from the Qajar monarchy, emboldened and culminated into an anti-monarchist and anti-colonialist movement that would continue through to the 20th century in Iran.

Additionally, Lady Nosrat Amin, Iran’s most notable female mujtahid and author of a 15 volume tafsir, proved that Islam has historically held the intellectual contributions of women in the highest regard, an aim which the later Islamic Revolution sought to defend.

Across West Asia and North Africa, women have served in many capacities to defend honor and sovereignty on the front lines. While the name of Djamila Bouhired of Algeria is notable, fewer still recall the name of Zohra Drif from the Battle of Algiers, leading struggles against French occupiers in her capacity as vice-president of the Council of the Nation, the upper house of the Algerian Parliament. She was most known for her resistance operation in carrying out the Milk Bar bombing, a pub frequented by French settlers.

In Iraq, writer Bint al Huda challenged reactionary elements of Arab society and secular liberalism alike on Islamic terms not through doctrine but through artistic elements of storytelling. She and her brother, the theologian and philosopher Sayyed Baqr al-Sadr, were brutally murdered at the orders of Saddam Hussein at the advent of the US-backed war on Iraq in 1980.

Siham “Um Yasser” Mossawi, the wife of Sayyed Abbas al-Musawi, was a leader, fierce orator, and community leader in her own right. A lifelong scholar, who, growing up, could barely be seen without a book in her hand, she was known for her leadership in establishing women’s hawzas in her village, where she routinely gave engaging lectures and speeches. A visionary of iron will, she prophetically always told Sayyed Abbas that she and him “would see martyrdom together.”

Finally, Palestinian women have been front and center in the revolutionary struggle against Zionism. Past icons like Leila Khaled to Dalal Moghrabi and Fatima Bernawi were fierce fighters that advanced the Palestinian cause on the local militant fronts in Lebanon and Palestine, reaching high ranks within the PLO in the 1960s and 1970s. One of their PLO contemporaries, Rasmea Odeh, extended the cause across hemispheres, building bridges and links with Black and Indigenous leaders and movements in the US from Chicago, drawing the ire of the US regime during her 2014 arrest and deportation, carried out under the false premise of “immigration fraud.”

In 1997, Sayyed Khamenei said in a speech that “Islam’s purpose in defending women’s rights is that women should not be oppressed,” adding that it was “oppression” if anyone stifled a woman’s passions, talents, and prevented her from obtaining “a secure environment to study and work.” In resisting the many levels of oppression that they confronted, these women not only secured their rights at a social and personal level but paved the way to safeguard sovereignty and rights for all on a national and transnational scale.

Julia Kassem is an Economics and Political Science graduate from the University of Michigan, currently working on a Masters in Urban Policy and Planning from the American University of Beirut. Julia is also a freelance writer, having contributed to Detroit’s own Riverwise, Against the Current, blogs like the Establishment, and nationally syndicated outlets such as Counterpunch, Mintpressnews, and TruthOut.