RT.com –  Approximately 100 US citizens have passed the screening to join the Ukrainian armed forces fighting the Russian offensive, Kiev’s military attaché in Washington DC has revealed.

Since Moscow launched its invasion of its neighbor on February 24, some 6,000 people, mostly Americans, have reached out to the Ukrainian Embassy in the US to express their willingness to serve alongside Ukrainian forces, Major General Borys Kremenetskyi has told the news agency AP.

Interviews with volunteers have been conducted by Kremenetskyi and other diplomatic staff in the US capital via Zoom.

According to the official, half the applicants had to be rejected early in the vetting process as they did not have the required military experience, had a criminal background, or were either too young or too old. Others did not make the list because the embassy was not able to adequately check their background. To be granted official permission to fight for Ukraine, those candidates who make it through the initial stages have to undertake a final Zoom interview.

Before any foreigner can join up, they are required to sign a contract to serve without pay in the International Legion for the Territorial Defense of Ukraine. The combatants have first to get themselves to Poland, then cross the Polish-Ukrainian border at a specified point. They are given weapons on arrival in Ukraine but are expected to provide their own protective gear. 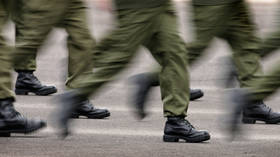 Kiev estimates suggest that, since the start of the war, approximately 20,000 foreign fighters from dozens of countries across the world have joined the Ukrainian forces.

Kremenetskyi said that among those American volunteers deemed eligible were veterans of the Iraq and Afghan wars with combat experience, including a number of helicopter pilots.

The US government has advised its citizens against heading to the war zone. In fact, last Wednesday, Secretary of State Antony Blinken called on Americans who might be thinking of traveling there “not to go.” The State Department says that it is unclear how many have arrived in Ukraine since the start of the war, however.

According to an unnamed senior US federal law enforcement official cited by AP, Americans taking part in a military conflict abroad could face criminal charges at home or even lose their citizenship, under certain circumstances.

Several other experts the news outlet spoke with noted that such volunteers could potentially be recruited by foreign intelligence services while in the war zone and continue working for them on their return to the US. Others pointed to the risks to America’s national security posed by white supremacists, who are believed to be among the new recruits, and who could become even more radicalized in Ukraine.

The Russian Ministry of Defense, for its part, warned “foreign mercenaries” last week that they would not be considered prisoners of war should they be captured by Russian troops.

Ukraine’s military attaché in the US insists that the volunteers are “not mercenaries who are coming to earn money,” but rather “people of goodwill who are coming to assist Ukraine to fight for freedom.” Kremenetskyi told AP it was the “unfair” and “unprovoked” nature of Moscow’s attack that was compelling Americans to “go and help” Ukraine, asserting that “Russians can be stopped only with hard fists and weapons.”