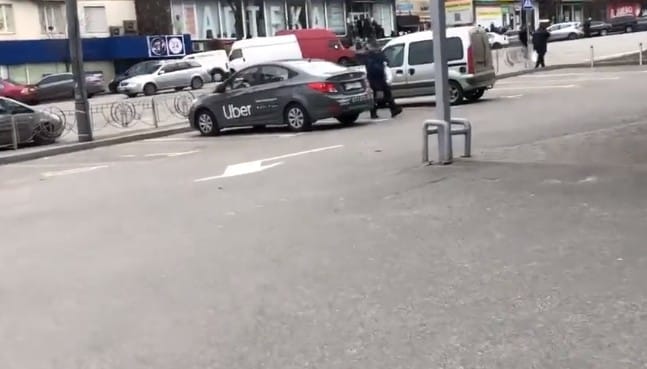 Still no visible signs of a war in the city.
Kyiv is the big cheese is this illusion, I have no interest in the hundreds of ex soviet empty and derelict villages.

The military has been using those villages for target practice and war games since the USSR fell. pic.twitter.com/lCgre1e99h

After endless walking around the city for the past few days, I decide to revisit Kyiv’s main train station.

Another manipulated crisis situation that could be avoided if the government really cared about its people. pic.twitter.com/7NU0f7Bw3Z

The 8th of March…

And blizzard with coffee to start the morning. pic.twitter.com/erKi0P3Y4R

I walk and walk, getting onto the Irpin film set is near impossible.

The metro is open and running but has armed police that want to search you before entry.

I walk in the direction of Irpin and come across this hospital, there’s armed guards outside so I film the side.

Irpin is a 30min drive away, wouldn’t there be sounds of war? And wounded soldiers?

(Just think with this blank canvas how much digital overlay fakery is possible) pic.twitter.com/sEqFrwybvc

There is lots of food in Kyiv!

If there are people in the city that can’t eat it’s more likely because they have been economically destroyed by the government shutting down any way to earn a living.

Alcohol has been prohibited. pic.twitter.com/ovMsoNa2SV

Tip: Always carry an item and receipt whilst walking around a movie set like Kyiv.

(There are many Agent Smiths in blacked out vehicles driving around) pic.twitter.com/YxAAlIsSNj

The city of Kyiv is now a Movie set…

Come experience the illusion of war as we walk though the Hollywood set know as Kyiv.

PROPS such as abandoned cars, blockades and checkpoints are placed around the city by the visual effects team for a fully immersive 4D experience. pic.twitter.com/WCv9chcEle

Each day I wake up, grab a coffee and continue to walk the streets in search of a War.

I gave up on taxi drivers on day one, they wanted cash (which is hard to find in Kyiv as all ATMs are dry) but understandably they didn’t want the attention of driving a foreigner to Irpin. pic.twitter.com/DkJiVMVTyL

Everyone told me “there is no hotels or hostels in Kyiv, it’s a war zone!!”…

Truth, there is an abundance of places to stay!!

I picked a cheap hostel as I’m on a budget.

(so everyone understands, im a night club bouncer with about £1000 to my name). pic.twitter.com/e77sD7AM9M

Shut everyone inside for a curfew and blast sirens across the city to scare the shit out of people.

My first Air raid siren… and no one cares.

Audio sound effects are another way to create the illusion of war.

I walk the street and see no evidence of this as of yet.