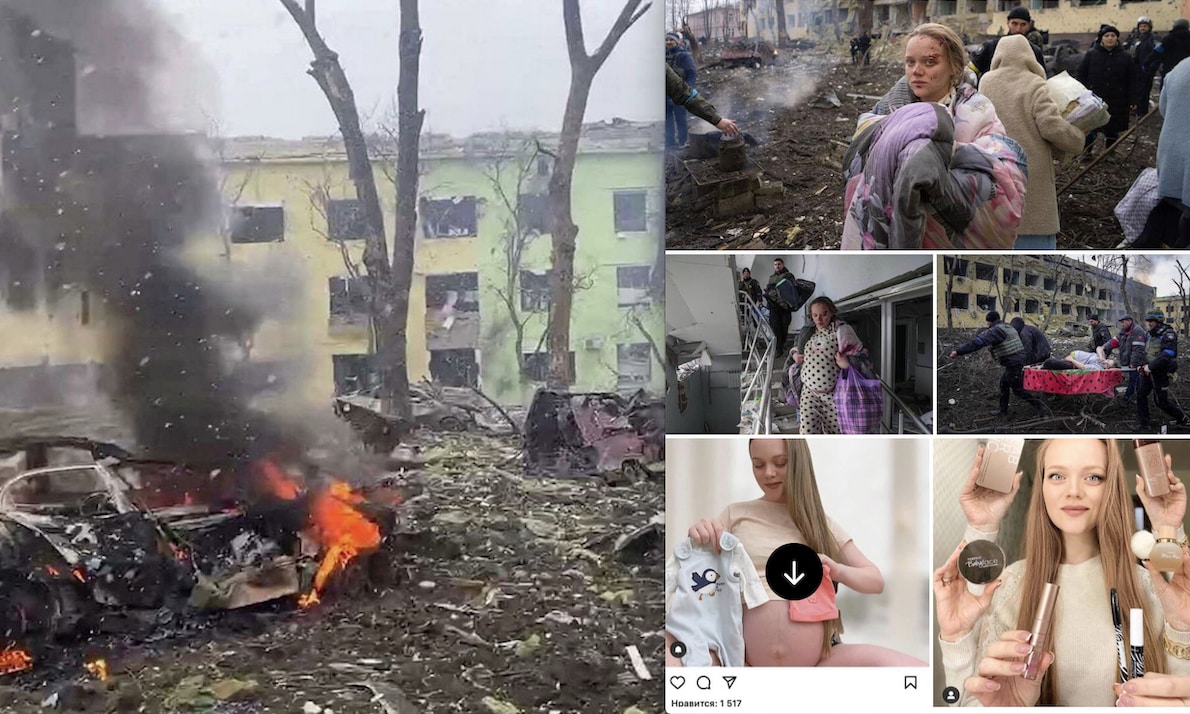 “The humanitarian corridors exiting Mariupol have been interrupted again, this time due to a barbaric attack on the city hospital on the Sea of ​​Azov, which also includes maternity and pediatric wards. The head of the Donetsk regional military administration, Pavlo Kyrylenko, denounced the raid at the same time that other raids are “raining” from the skies of Kharkiv and the outskirts of Kiev. President Zelensky, citing the bombing of the Mariupol hospital, denounces “there are children under the rubble! Stop! ”.

We randomly caught this very short story of a huge Fake-News on a European mainstream site. For one simple reason: there was no civilian or patient! And the photos of a pregnant woman rescued in the rubble are very suspicious since it is a Ukrainian model used to posing in front of the camera with a pillow instead of a child …

It had in fact been freed from patients before March 7 when the permanent representative of Russia to the United Nations, Vassily Nebenzia, during the meeting of the Security Council, made a detailed report on the key city in the clash between Russian militias and Ukrainian neo-Nazi nationalists who have the task of defending that area. Not only.

Messed Up!! Russia bombs a maternity hospital? Marianna and the new incubator lie

For one simple reason: there was no civilian! It had in fact been cleared before March 7 when the permanent representative of Russia to the United Nations, Vassily Nebenzia, during the meeting of the Security Council, made a detailed report on the key city in the clash between Russian militias and Ukrainian neo-Nazi nationalists who have the task of defending that area. Not only.

Russian Defence Ministry spokesman Major General Igor Konashenkov said that claims of the “airstrike” that allegedly took place in the Ukrainian city of Mariupol are nothing but a provocation aimed to fuel anti-Russian hype. The defense official pointed out that the Russian Air Force performed “absolutely no tasks” in the Mariupol area writes Sputnik International, difficult to find in Europe, as Russia Today, due to the censorship decided by the European Union against the Russian media.

“The analysis of statements made by representatives of the Kiev nationalist regime, photographic materials from the hospital leaves no doubt: the alleged ‘airstrike’ that took place is a completely orchestrated provocation to maintain anti-Russian hype among the Western audience”, Konashenkov said.

He explained that although the nature of the external and internal damage to the building can mislead the mass non-professional audience in Europe and the United States, it cannot trick experts, since “a high-explosive aviation munition simply would not have left anything from the outer walls of the building”.

According to Konashenkov, it was said earlier that Mariupol’s hospitals, including hospital №3 – the one that was allegedly shelled overnight – stopped working in late February.

This would be the umpteenth False-Flag, a real or simulated attack made by an enemy to blame the opponent: just like the fictitious bombing of asylum in the Donbas, which resumed the attacks of the Kiev army and induced the Russian president Vladimir Putin on February 22 to recognize the independence of the Republics of Donetsk and Lugansk and then launch the military operation on February 24.

But it is also similar to the alleged attack on a children’s hospital in Kiev, later denied by the same Ukrainian journalist who had spread the news and a photo of a dead but strangely posing child to all the international media.

One of the symbols of media speculation against Putin, intent on ending a war started by the army of Kiev 8 years in the Donbass which caused 13 thousand deaths, induced even the UN Secretary-General, a great supporter of that oligarchy, into a sensational gaffe of the World Economic Forum which, according to Archbishop Carlo Maria Viganò (Apostolic Nuntius Emeritus in the USA for the Catholic Church), has fomented the war in Ukraine to impose the tyranny of the New World Order. Those who have the patience to read his long Dossier will find confirmation of what Gospa News has been writing since 2018 on the tortured and until yesterday forgotten Donbass.

The UN Secretary-General, Antonio Guterres, had previously condemned on his Twitter an “attack on a hospital in Mariupol, Ukraine, where maternity & children’s wards are located, is horrific. Civilians are paying the highest price for a war that has nothing to do with them. This senseless violence must stop. End the bloodshed now”.

Today's attack on a hospital in Mariupol, Ukraine, where maternity & children's wards are located, is horrific.

Civilians are paying the highest price for a war that has nothing to do with them.

This senseless violence must stop.

The Deputy Permanent Representative of Russia to the United Nations, Dmitry Polyanskiy, however, heavily scolded him on Twitter: “That’s how Fakenews is born. We warned in our statement back on 7 March (https://russiaun.ru/en/news/070322n) that this hospital has been turned into a military object by radicals. Very disturbing that UN spreads this information without verification”.

That’s how #Fakenews is born. We warned in our statement back on 7 March (https://t.co/OpSeejBais) that this hospital has been turned into a military object by radicals. Very disturbing that UN spreads this information without verification #Mariupol #Mariupolhospital https://t.co/99v8avyThS pic.twitter.com/JsHgsv5YfQ

To fully carry out our work as investigative journalists, after having unmasked the hole made with a pickaxe in kindergarten and the dead child posing among the cartoons of a hospital that had never been hit, we went to read the official statement of the permanent representative of Russia to the United Nations, Vassily Nebenzia.

«On 4 March, Russian Defense Ministry and Ukraine’s Deputy Prime Minister I. Vereshchuk negotiated parameters of humanitarian corridors from Mariupol to Zaporozhye and from Volnovakh to Denepropetrovsk. They should have opened at 10 am on 5 March. As requested by Kiev, representatives of the ICRC were invited to the areas of humanitarian passages. The Russian side was ready to render comprehensive assistance to maintain security during the evacuation. We informed the UN Secretariat about that in due course».

However, the Ukrainian radicals who were in Mariupol violated this agreement. As we take it from an intercepted communication of two commanders of the Azov battalion, the radicals in Volnovakh received an order to kneecap those heading towards humanitarian corridors. Those who dared to leave Mariupol at their own peril and risk were shot by Ukrainian Nazis at checkpoints when trying to exit the city. Again, there is plenty of video evidence proving this» added the Russian ambassador who in the previous days had denounced the cases of the use of civilians as human shields by the Kiev paramilitaries who also make children fight (as confirmed by photos and Dossier Viganò).

By our records, 200 thousand civilians are trapped in Mariupol alone and held at gunpoint by the Azov battalion. The humanitarian situation in cities deteriorates rapidly. As for humanitarians who are ready to help, they cannot get in there and prevent the unfolding disaster. People in other regions of Ukraine that have been blocked by nationalist battalions find themselves in the same desperate situation. Ukrainian radicals show their true face more distinctly by the day. Locals reports that Ukraine’s Armed Forces kicked out personnel of natal hospital #1 of the city of Mariupol and set up a firing site within the facility. Besides, they fully destroyed one of the city’s kindergartens» stated Nebenzia.

“All the staff and patients were dispersed by the nationalists. Due to the favorable tactical location close to the city center, the hospital building was converted into a stronghold of the Azov nationalist battalion”, general Konashenkov explained.

Until evident, concrete, and unequivocal evidence to the contrary, we are more willing to believe the Russian diplomat than the soldiers of the Azov Battalion who parade with the Nazi swastikas and the Ukrainian president, a former comedian, embroiled with the shadiest potentates on earth as detailed in the Dossier Viganò.