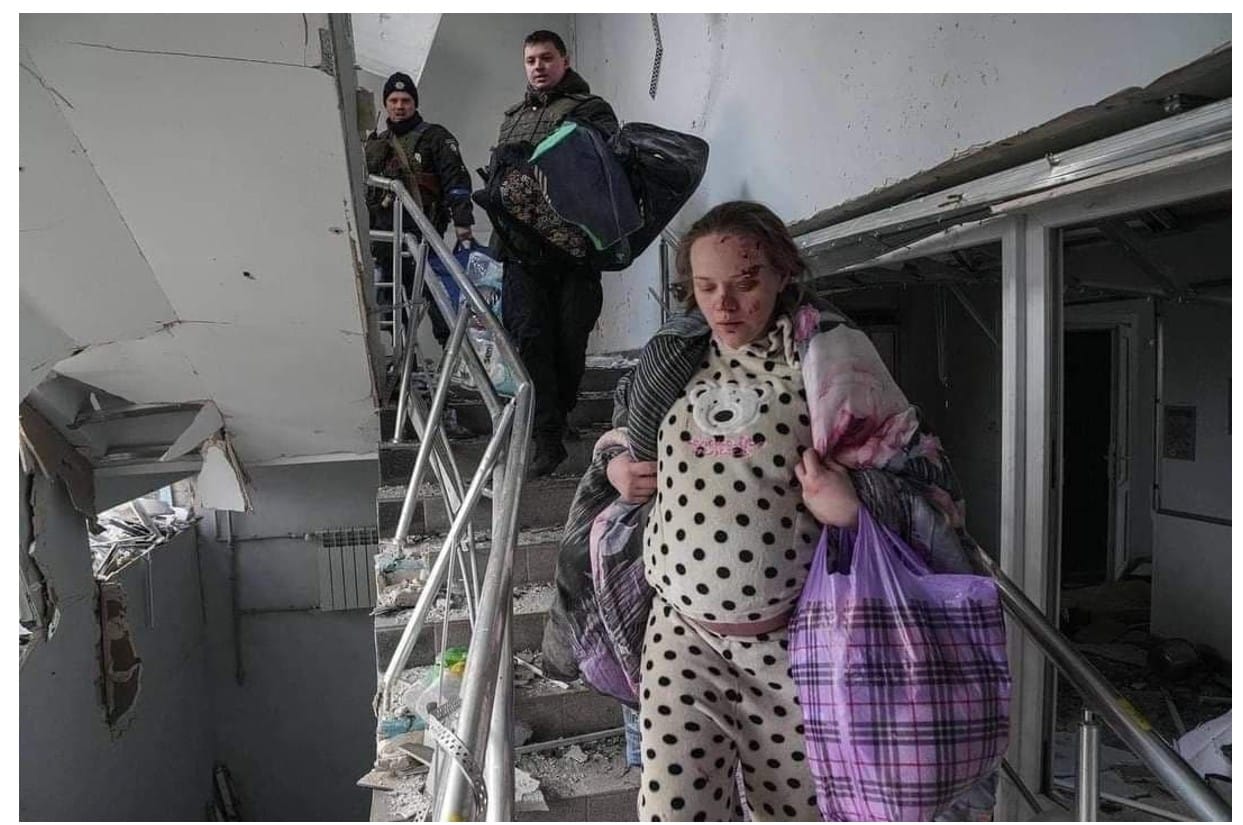 VT: When did it begin?  Not Sandy Hook, not even 9/11 or Boston…this time we have another ‘Bin Laden Studios’ false flag covering the Nazis hiding a command center and torture prison in a hospital…with CIA help.

Western media report indignantly about an alleged Russian attack on a maternity clinic in Mariupol. However, the “victims” are actors, as anyone can easily verify.

Russian forces already reported on March 7 that the maternity clinic in Mariupol, now allegedly bombed by Russian forces, had been cleared and turned into a base for the Azov battalion. So we have two versions of the story: the government in Kiev accuses Russia of bombing a maternity clinic, Russia says the whole thing was a staged propaganda event. Let’s go in search of clues.

Photos circulated in the media show a pregnant woman being evacuated from the maternity hospital. 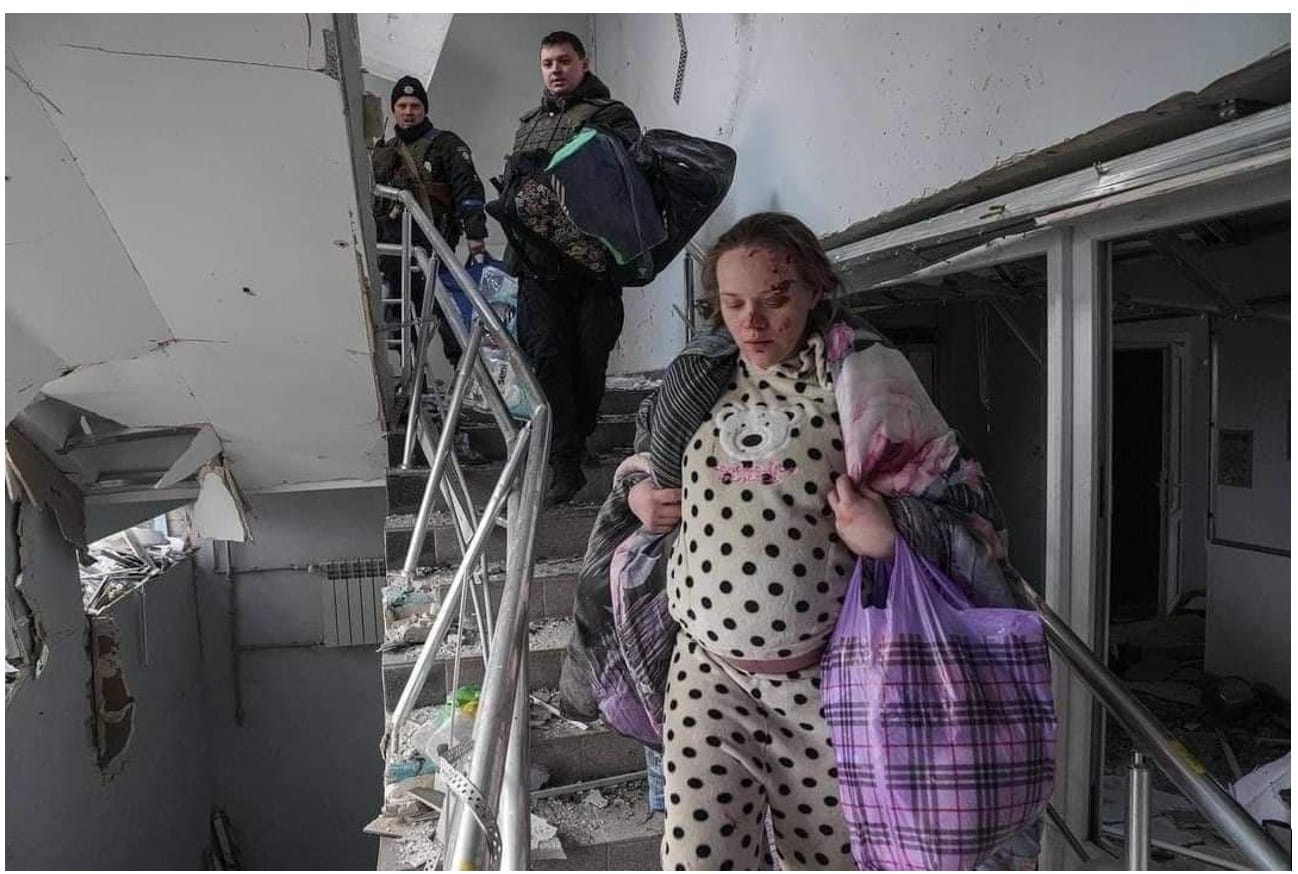 Pictures are also shown of a pregnant woman being carried away on a stretcher. On closer inspection, one realizes that it is the same young woman. 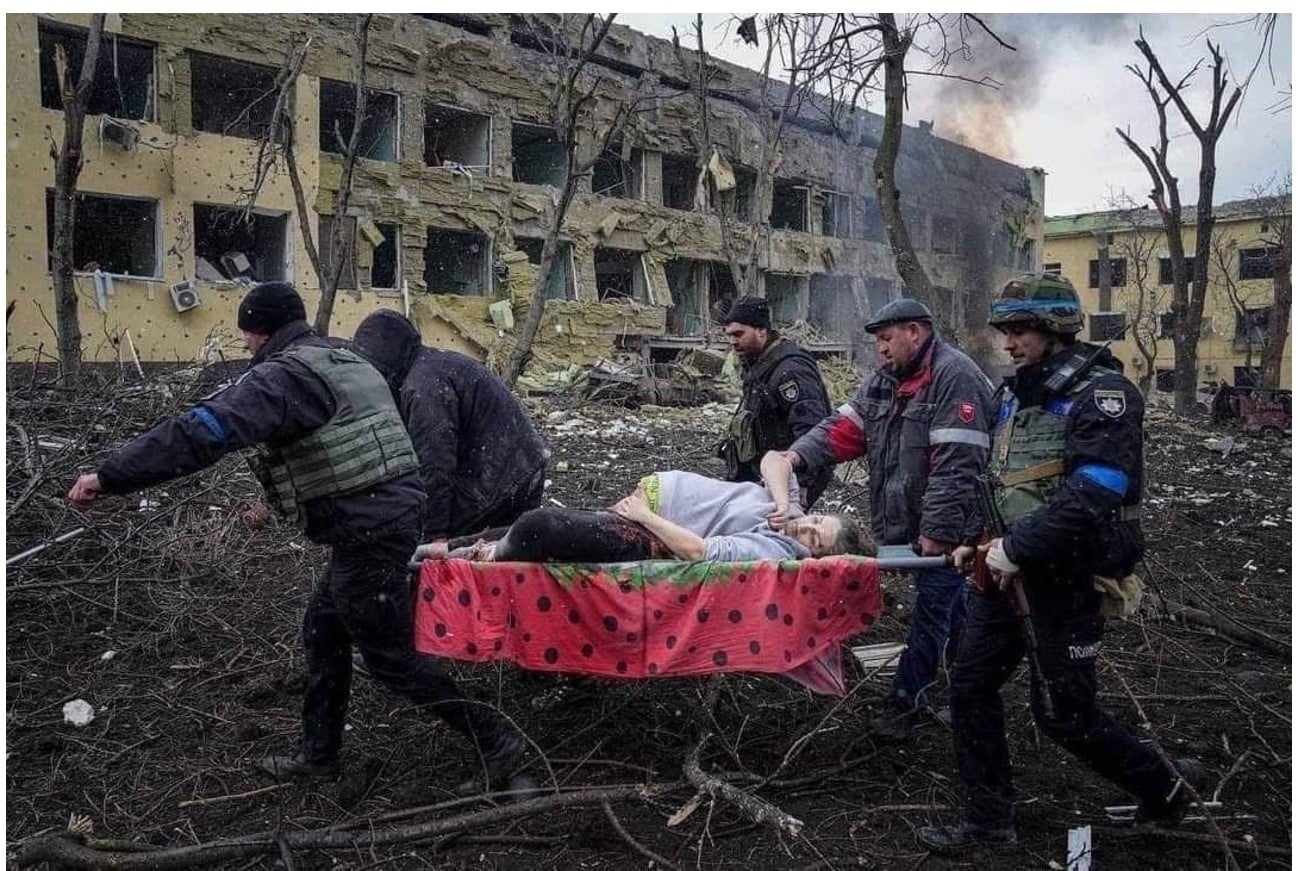 However, she was changed. After leaving the hospital that had just been bombed, did they change a pregnant woman in the street before putting her on a stretcher and taking her to the ambulance? (Author’s note: I initially wrote that you could see her pajamas peeking out, this was an error as readers have shown me from enlargements of the photo. I apologize for that. However, the enlargement of the photos clearly shows that it is the same woman).

Is this realistic, considering the shock and injuries to be expected in such a situation? We will see how this went in a moment, because we will see the young woman again.

First, the question arises: who is this woman, anyway? Her name is Marianna and she is a beauty blogger from Mariupol, so she is a photo model. Anyone can check out her account on Instagram by searching for “gixie_beauty” there. 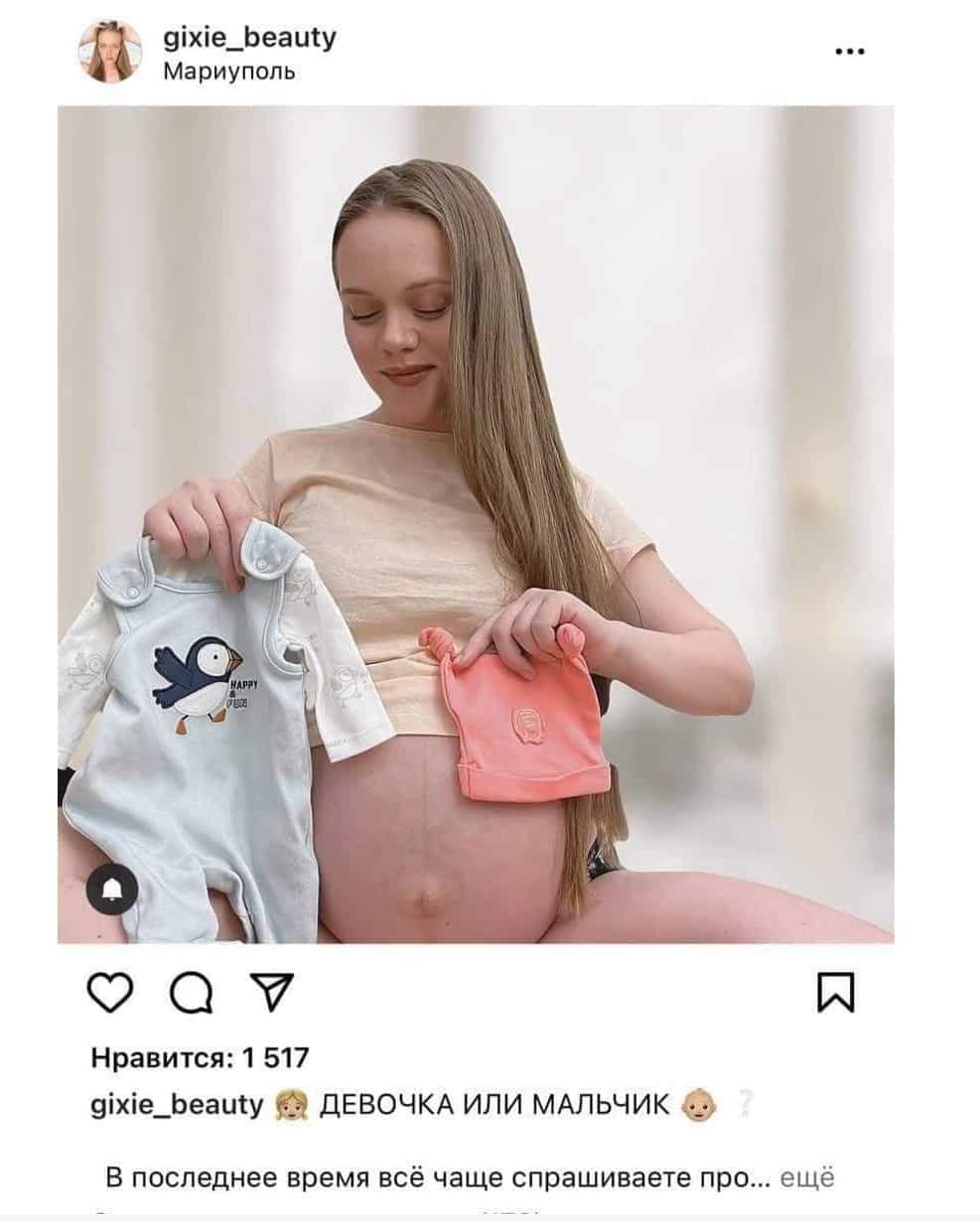 Ukrainian President Selensky posted a video on Telegram from the maternity hospital, filmed immediately after the explosion, as you can see from the still-burning fires and the time of the post. The video is shocking, but it has a flaw: it shows the destroyed interior of the hospital, but nowhere is there blood, dead or injured.

Instead, the end of the film tells in Russian that the Russian air force has just bombed a maternity hospital. And to make it more dramatic, he yells at the obviously empty building, “Is there anyone here?”

But with the damage shown in the video, in an operating hospital, all the patients and staff who had been on the side with the destroyed windows, there were patient rooms, should have been seriously injured or killed by the flying glass and shrapnel.

However, there are neither victims nor blood.

A video of the explosion and the minutes after it was published on YouTube. Any professional can see that the video was shot with a professional camera with stabilizer, a cell phone video would be totally blurred, especially in the scenes where the cameraman is running. . 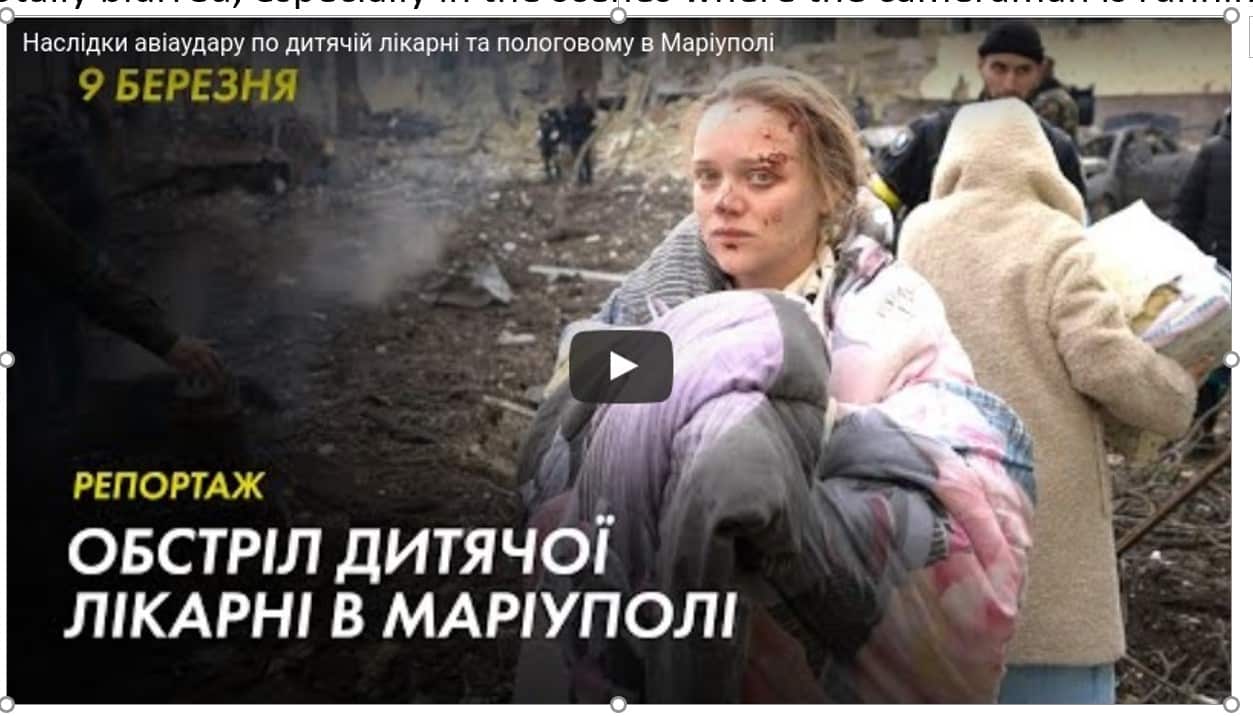 By the way, Marianna can be seen on the cover picture again, we’ll get to that in a moment. First to other details of the very interesting video. In minute 0.45 it is shown how Marianna is carried down the stairs on the stretcher, which she still walked down herself in her pajamas in the first photo shown above. For comparison, here is Marianna again in her pajamas on the stairs. 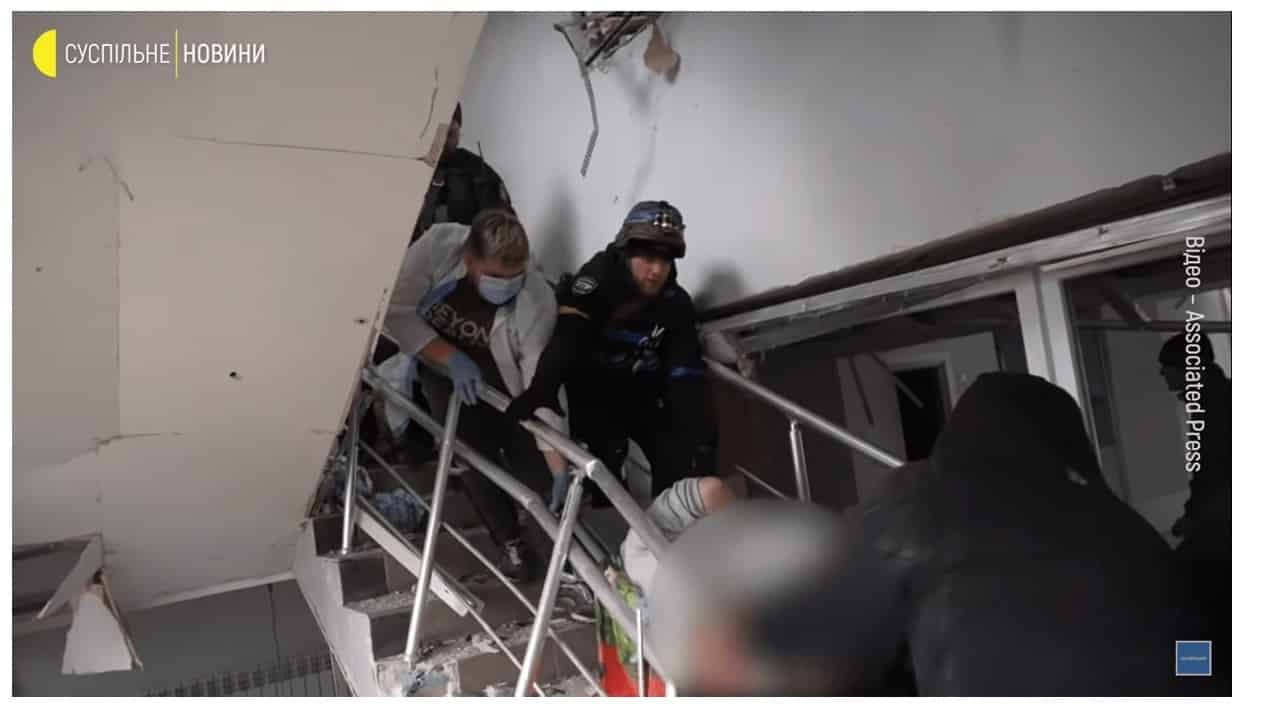 The fact that Marianna is on a stretcher is seen in the next shot as she is carried out of the hospital. 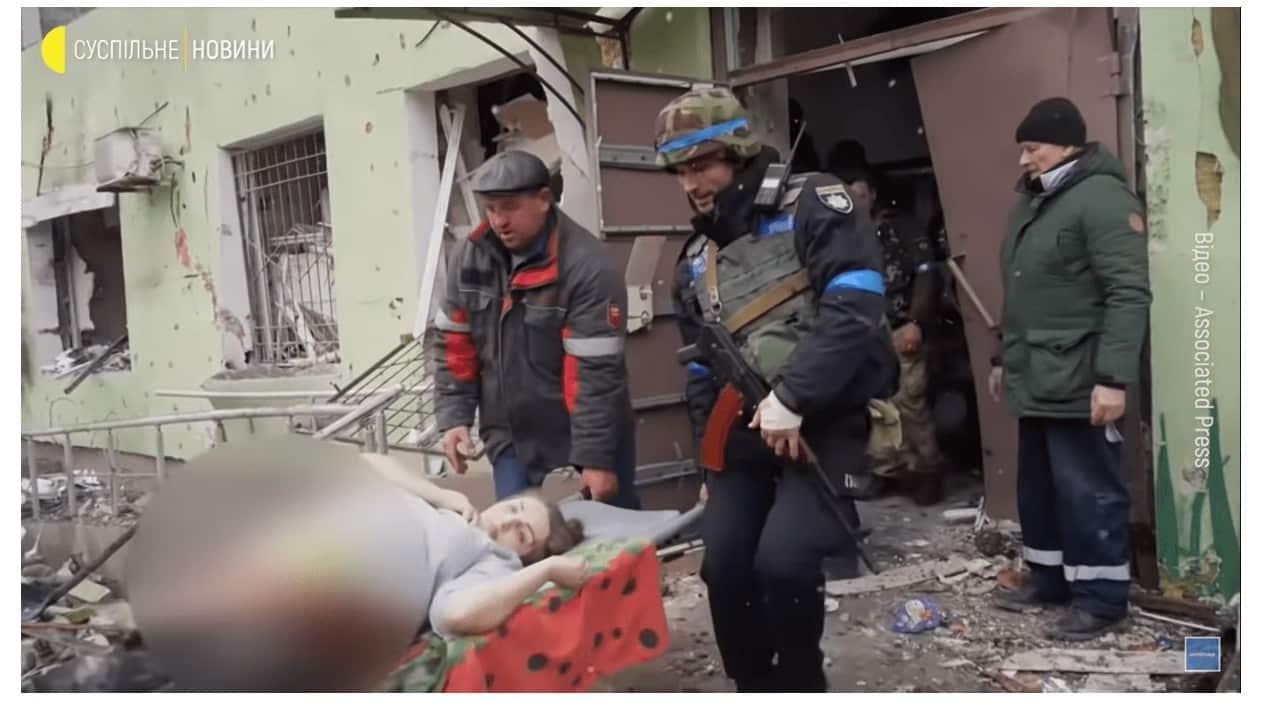 And of course you can recognize Marianna in the photo shown above, which was taken by another photographer. In the video, other settings are shown and her belly is pixelated in the video. So there must have been a lot of cameras and cameras around. 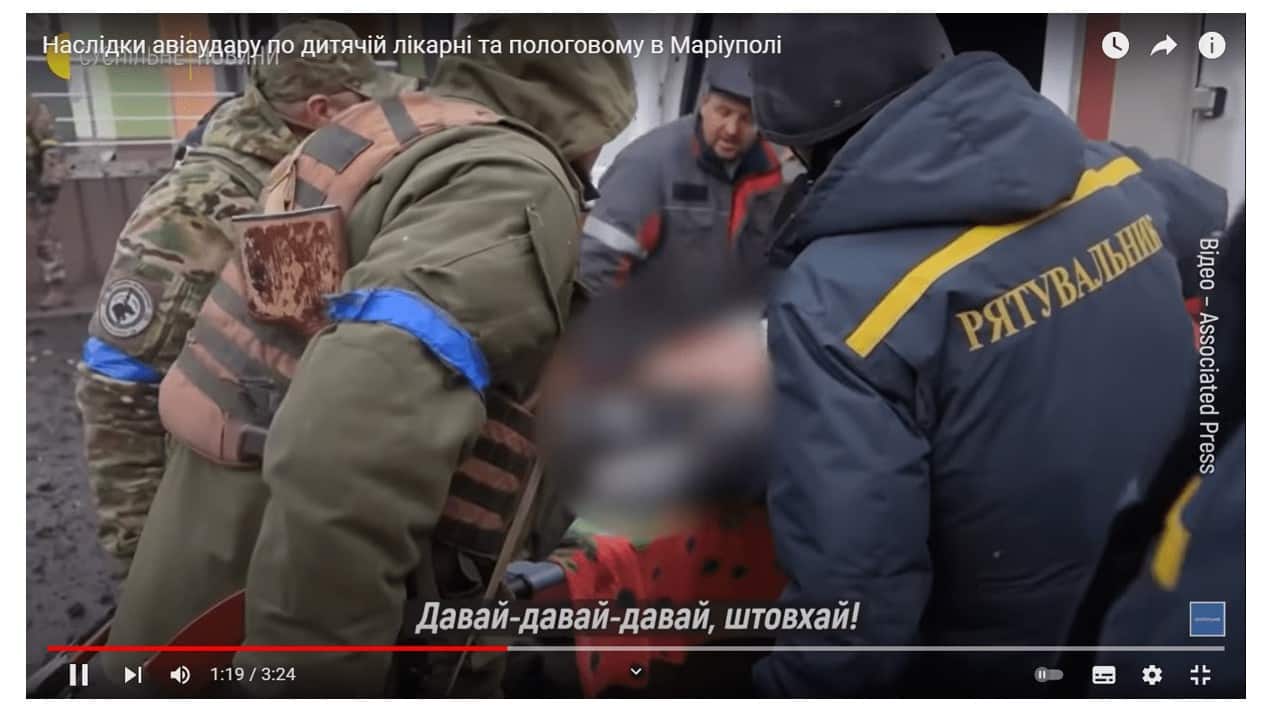 The camera follows Marianna all the way to the ambulance.

There are more scenes in the video, which is only three and a half minutes long, that show that this is a staged video. For example, in minute 1.31 a woman with a child in her arms (who is also quite calm and not crying) calmly comes out of the maternity hospital. She is not at all panicked, as one should expect after such an incident. Instead, she calmly asks in Russian, “And where do you want me to go?”

The soldier is also interesting, by the way, because in minute 0.40 he bandages a woman’s head in a completely unprofessional way, looking frantically towards the camera as if to make sure he’s doing everything right. But what’s the point of a soldier bandaging a woman’s head if it’s a hospital full of doctors and nurses who can do it much better than he can?

By the way, in minute 2.09 we see Marianna again. This time she is standing in front of the hospital wrapped in a blanket, as can be seen on the cover of the video.

She has already been taken to an ambulance on a stretcher, and the whole way from the stretcher was filmed: Down the stairs (which she had already walked down herself in her pajamas), across the destroyed forecourt to the ambulance. And suddenly she is standing in front of the hospital again, this time wrapped in a blanket. 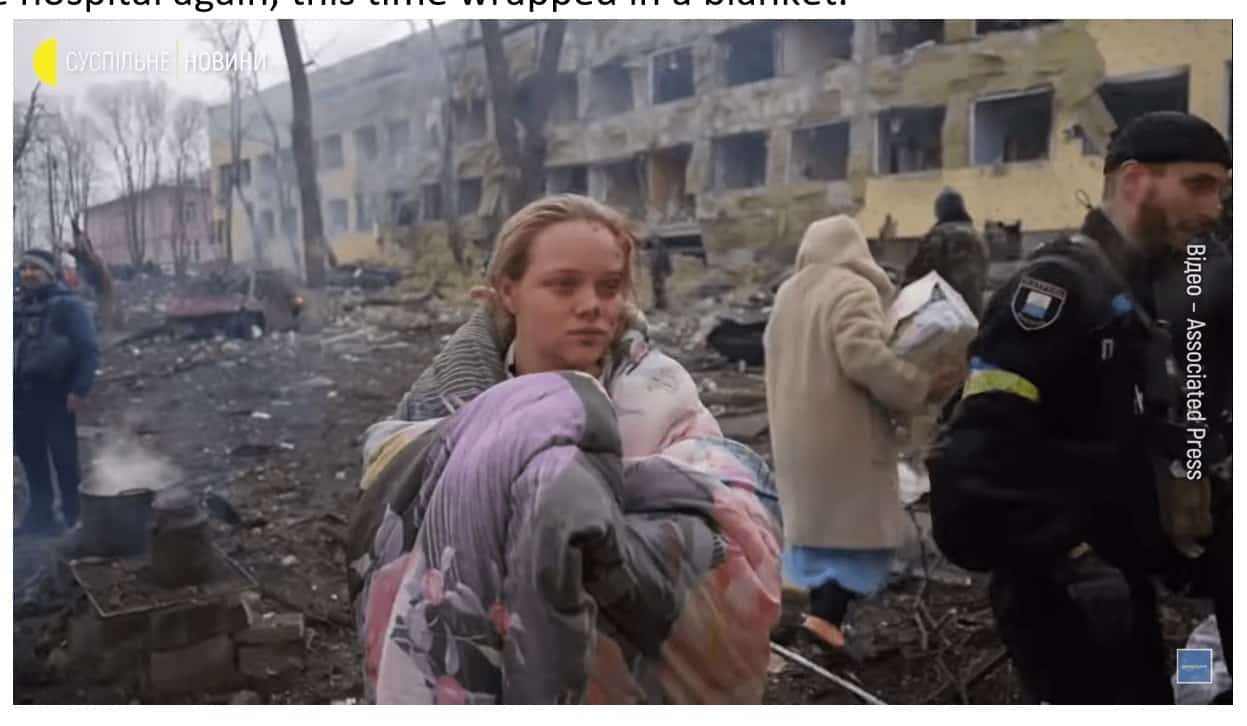 From minute 2.13, our soldier is also back. This time he tells the cameraman what happened and how they evacuate the injured.

Always at the “right” time

Anyone can tell without too much trouble that the footage of the alleged Russian attack is staged. And they came at an appropriate time, because on the same day Selensky again begged for a NATO no-fly zone, a Russian bombing of a maternity hospital came just at the right time as an “argumentation booster”.

There is a system to this, as we all remember the big explosion in Kharkiv, the pictures of which the media showed for days. That, too, conveniently came just before Selensky addressed the EU Parliament in a dramatic speech.

I am reminded of the “maternity hospital” story of the incubator lie. Incidents in birthing clinics, attacks on defenseless newborns, shock everyone and turn off factual thinking. This is exactly the purpose of propaganda: it is supposed to unleash emotions and create the desired mood, including the image of the enemy.

War propaganda instead of critical journalism

If it is so easy to show that the alleged air strike on the “maternity hospital” was a staged story by the Ukrainian government, why can’t the “journalists” of the Western “quality media”? Or to put it another way, why doesn’t any “quality journalist” explain to me why this was not a fake and how Marianna, as a “pitiful victim” of the Russian airstrike, appears three times in different roles in the video that is supposed to prove the alleged Russian attack?

This is war propaganda at its purest, following the rules laid down in the Guide to War Propaganda. Rule 5 is followed, which says: “The enemy knowingly commits atrocities”.