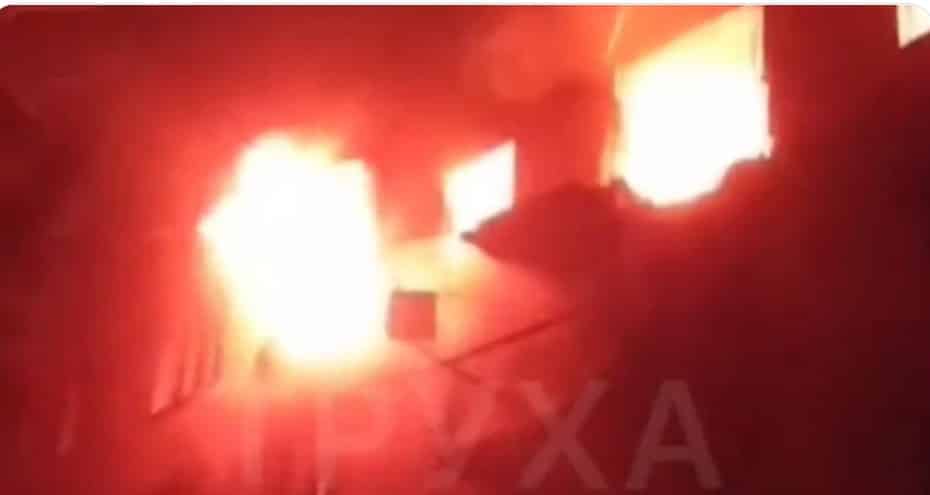 Between 2015 and 2017, the Kharkov Research Institute send up to 5 shipments of low-level nuclear material capable of fueling a dirty bomb…to ISIS.  US Navy SEALS recovered both evidence of US and Ukrainian involvement and secured the remaining nuclear material while spiriting ISIS commanders to Hasakah for redeployment.

Three shipments of nuclear material intended for ISIS, shipped from Ukraine, were seized by Turkey during this period.

Sputnik: Russia’s Foreign Intelligence Service previously reported obtaining evidence that Kiev was working on building nuclear weapons and that the US was aware of it. Ukrainian President Volodymyr Zelensky in February threatened to withdraw from the Budapest Memorandum that stipulated the non-nuclear status of his country.

▪ Another provocation of nationalists was recorded in Kharkov, where, in order to conceal research on nuclear topics, militants of territorial defence battalions blew up one of the buildings of the Physics and Technology Institute on Akademicheskaya Street. Up to 50 employees of

Ukrainian nationalists blew up one of the buildings belonging to the Kharkov Institute of Physics and Technology in order to conceal evidence of the nuclear research conducted there, the head of the Russian National Defence Control Centre, Mikhail Mizintsev, has stated.

The Russian Ministry of Defense announced an explosion in the Kharkov Institute of Physics and Technology to hide work on nuclear topics. pic.twitter.com/FwxtvBkG4t

Up to 50 employees of the institute could be trapped under the rubble”, he added.

The Kharkov Institute of Physics and Technology was the first institution in the USSR to carry out nuclear fission. In 1948, it became the base of education of Soviet nuclear physicists and worked on the USSR’s project to build its first nuke. The institute later focused on researching nuclear energy and nuclear reactor construction.

While Ukraine agreed to export all of its highly enriched Uranium to Russia back in 2010, the country received shipments of low enriched uranium from the US as compensation.

Director of Russia’s Foreign Intelligence Service Sergei Naryshkin stated last week that his agency had obtained evidence that Ukraine was working on building nuclear weapons and that the US was aware of it.

At the same time, Ukrainian President Volodymyr Zelensky in February 2022 threatened that he could withdraw his country from the Budapest Memorandum – a pact under which Ukraine agreed to give up Soviet-era nukes in exchange for security guarantees.

Mizintsev also reported on the situation in other Ukrainian cities, saying that all entrances and exits, those that weren’t destroyed, from Mariupol were mined by nationalists.

Attempts by sappers of the Donetsk People’s Republic to remove mines from the roads leading to Mariupol were not successful, as the nationalists were firing at them intensely from various types of weapons”, Mizintsev said.

He added that nationalists also roam the streets of the city, shooting indiscriminately and thus forcing people to stay in their homes.

The National Defence Control Centre chief further said that Ukrainian nationalists and military use the ceasefires negotiated to organise humanitarian corridors for civilians to move to new and better positions. Mizintsev added that the Russian military monitors the civilian evacuation process and the Ukrainian military’s movements with the use of drones when humanitarian corridors are opened.