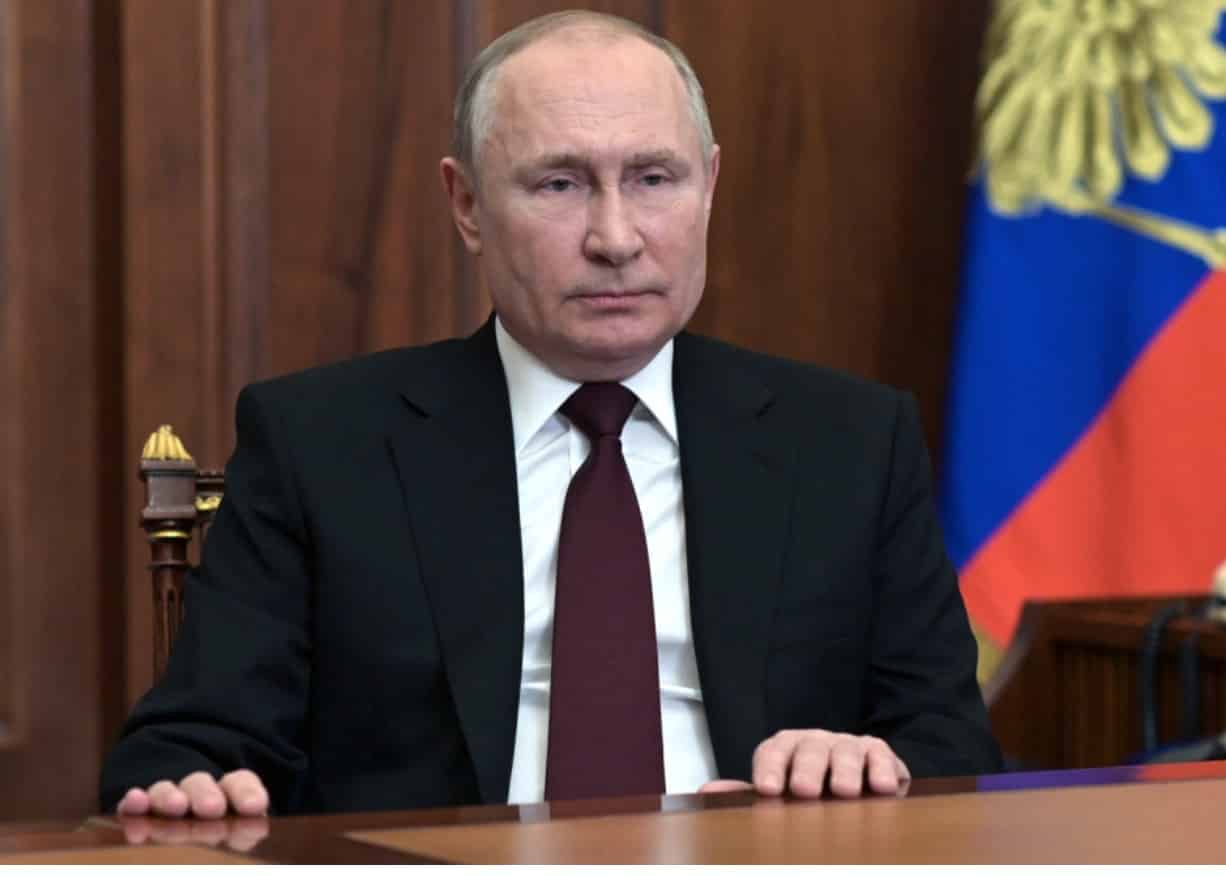 Press TV: Russian President Vladimir Putin has slammed the “flagrant violation” of international humanitarian law by Ukrainian forces, calling on the leaders of Germany and France to pressure Kiev to force its nationalist battalions to stop their crimes.

Putin made the remarks during a phone conversation with German Chancellor Olaf Scholz and French President Emmanuel Macron on Saturday, as they talked about the humanitarian situation in Ukraine.

“Putin informed (them) about the real state of affairs” in Ukraine, the Kremlin said in a statement. “In particular, numerous examples of the flagrant violation of the norms of international humanitarian law by Ukrainian security forces were cited.”

He also accused the Ukrainian army of “extrajudicial executions of dissenters” and “taking hostages and using civilians as human shields.”

The Russian president claimed the Ukrainian army was deploying heavy weapons near hospitals, schools, and kindergartens, adding that nationalist battalions were systematically disrupting operations to rescue the population at the same time, and had thwarted efforts to evacuate civilians via humanitarian corridors on several occasions.

Putin further notified the two leaders of the results of a recent video conference between Russian and Ukrainian negotiators.

Russia says has destroyed some 1,000 Ukrainian tanks, other armored vehicles

His French and German counterparts, in turn, called on Russia to negotiate a ceasefire in Ukraine and work toward the diplomatic resolution of the crisis. The trio also talked about Russian security demands for Ukraine.

Putin announced a “special military operation” in Ukraine on February 24. The conflict has provoked a unanimous response from Western countries, which have imposed a long list of sanctions on Moscow.

Russia says it will halt the military operation instantly if Kiev meets Moscow’s list of conditions, including that Ukraine never attempts to join NATO.

The military conflict has so far displaced more than two million people in what the United Nations has described as the fastest growing refugee crisis in Europe since World War II.

Russia has repeatedly warned that Ukrainian forces and nationalist battalions have been preparing dangerous provocations in order to blame Moscow for them. The West has so far ignored the Kremlin’s concerns and warnings.

Meanwhile, Ukrainian officials have claimed that heavy shelling by Russian forces is endangering attempted evacuations of civilians from encircled towns and besieged cities, as conflict rages on the outskirts of the capital Kiev.

Ukrainian President Volodymyr Zelensky said Russia has sent in new troops after Ukrainian forces put 31 of its battalion tactical groups out of action in what he called Russia’s largest army losses in decades, without giving any further details.

Air raid sirens were heard across most cities in Ukraine early on Saturday morning, according to a number of local Ukrainian media reports.

Earlier in the day, Zelensky said his country has “reached a strategic turning point” in the war with Russian forces appearing to regroup for a possible assault on Kiev.

Air raid sirens were heard across most cities in Ukraine, as Zelensky urged Ukrainians to be patient, insisting the country will prevail despite reports of Russian forces’ military advances.

US biolabs in Ukraine, simply ‘a small fraction’

Separately on Saturday, Russia said that US-funded biological laboratories revealed in Ukraine constitute only a small part of a global network of over 300 similar facilities.

“What was revealed in Ukraine is a small fraction of over 300 laboratories involving the United States and scattered around the world. There are documents. We will present new ones,” Russian Deputy Foreign Minister Sergei Ryabkov said.

The United States has admitted that Ukraine hosts “biological research facilities,” expressing concern that they could come under the control of Russian forces, as Moscow makes further advances following its military offensive in the country.

The Russian Defense Ministry has already said it had found evidence of US-funded biolabs in Ukraine, which had urgently destroyed samples of deadly pathogens when the military offensive started.

On March 9, the ministry said it had been closely monitoring the bioweapons programs that were developed by the Pentagon in post-Soviet countries, adding that according to new findings, a “network” of more than 30 biological laboratories was formed in Ukraine in particular.

The United States has also admitted that Ukraine hosts “biological research facilities,” expressing concern that they could come under the control of Russian forces, following Moscow’s military offensive in the country.