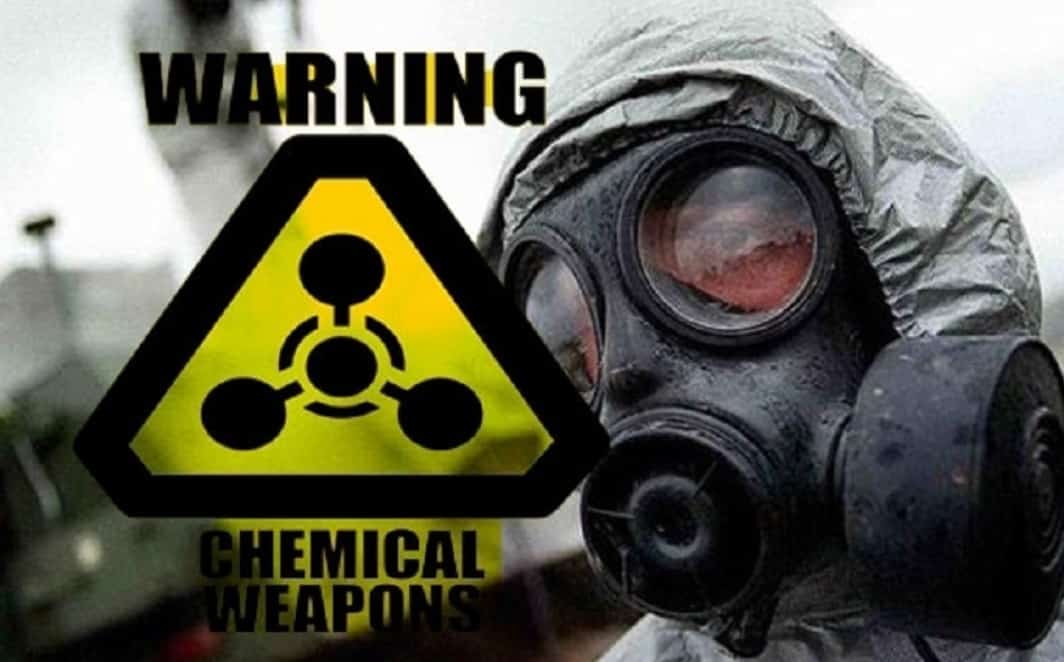 US Researched Coronaviruses, Did Experiments like Unit 731 in Ukraine Biolabs: Russian MoD

“Of all methods developed in the US to destabilize the epidemiological situation, this is one of the most reckless and irresponsible,” said Russian MoD. 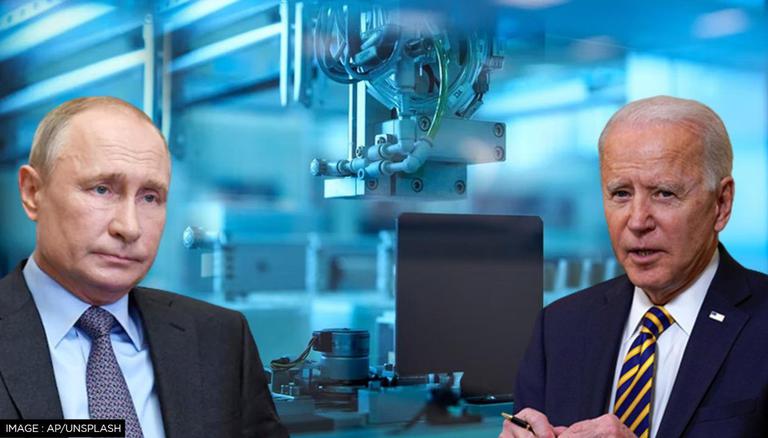 Russian Defence Ministry which accused the United States of funding installation of biological research labs in Ukraine has now alleged that Washington has been conducting experiments to create biological weapons, and was conducting bat coronavirus-related research.

In a press briefing on Thursday, Russia derided the United States for creating bioagents in Kyiv that would be used to target ethnic groups. It said Washington conducted an R-781 project that involved bats as carriers of potential biological weapons.

Other researches included bacterial and viral pathogens that can be transmitted from bats to humans: pathogens of plague, leptospirosis, brucellosis, as well as coronaviruses and filoviruses.

“It is noteworthy that the research is carried out in close proximity to the borders of Russia – in the areas of the Black Sea coast and the Caucasus,” said the Russian defence ministry.

The project was not only involving the Ukrainian laboratories but also the Georgian biological laboratories controlled by the Pentagon, in cooperation with the Virginia Polytechnic Institute and the US Geological Survey. 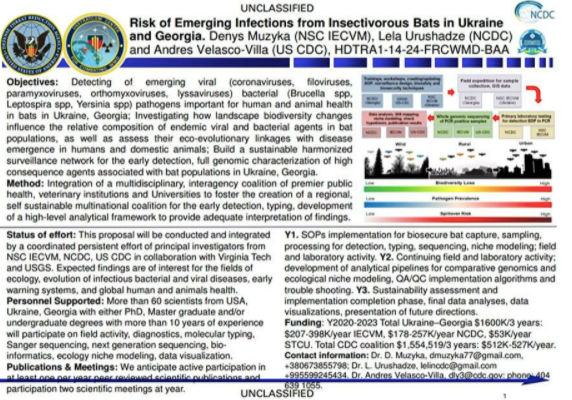 Russia states that the declassified documents reveal another project code-named ‘UP-8’, which was aimed at studying the Congo-Crimean hemorrhagic fever virus and hantaviruses in Ukraine.

These documents “clearly refute the US public statement that only Ukrainian scientists work in the Pentagon Biolabs in Ukraine without the intervention of American biologists,” said Russia’s defence ministry.

Moscow backed its claims with the “available documents” that it stated confirmed numerous cases of the transfer of biological samples of Ukrainian citizens abroad.

Details of what Moscow calls the  ‘UP-4 project’ were also discussed. The project was implemented with the participation of laboratories in Kyiv, Kharkiv and Odesa and was designed for the period up to the year 2020, Russia said.

“With a high degree of probability, we can say that one of the tasks of the United States and its allies in the creation of bioagents that can selectively affect various ethnic groups of the population”, the head of the Nuclear, Biological, and Chemical Protection Troops of the Russian Armed Forces, Igor Kirillov, told in a press briefing.

Kirillov claimed that Washington had sent 350 cryo containers with blood serum samples from the Public Health Centre of the Ministry of Health of Ukraine to a reference laboratory for infectious diseases at Australia’s Doherty Institute.

This, he claimed, was transferred under the pretext of determining the antibody titers. Moscow’s defence ministry also retrieved the payroll of Ukrainian contractors, which it says, clearly demonstrates how they were financed. 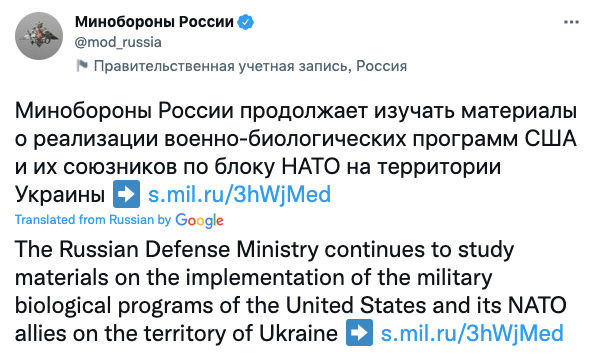 “US Department of Defence paid the money for research participation directly, without the involvement of intermediaries. The extremely modest pay, by US standards, is noteworthy. This indicates a low estimation of the professionalism of Ukrainian specialists and the neglect of their American colleagues,” said Head of the Nuclear, Biological, and Chemical Protection Troops of the Russian Armed Forces, Igor Kirillov. 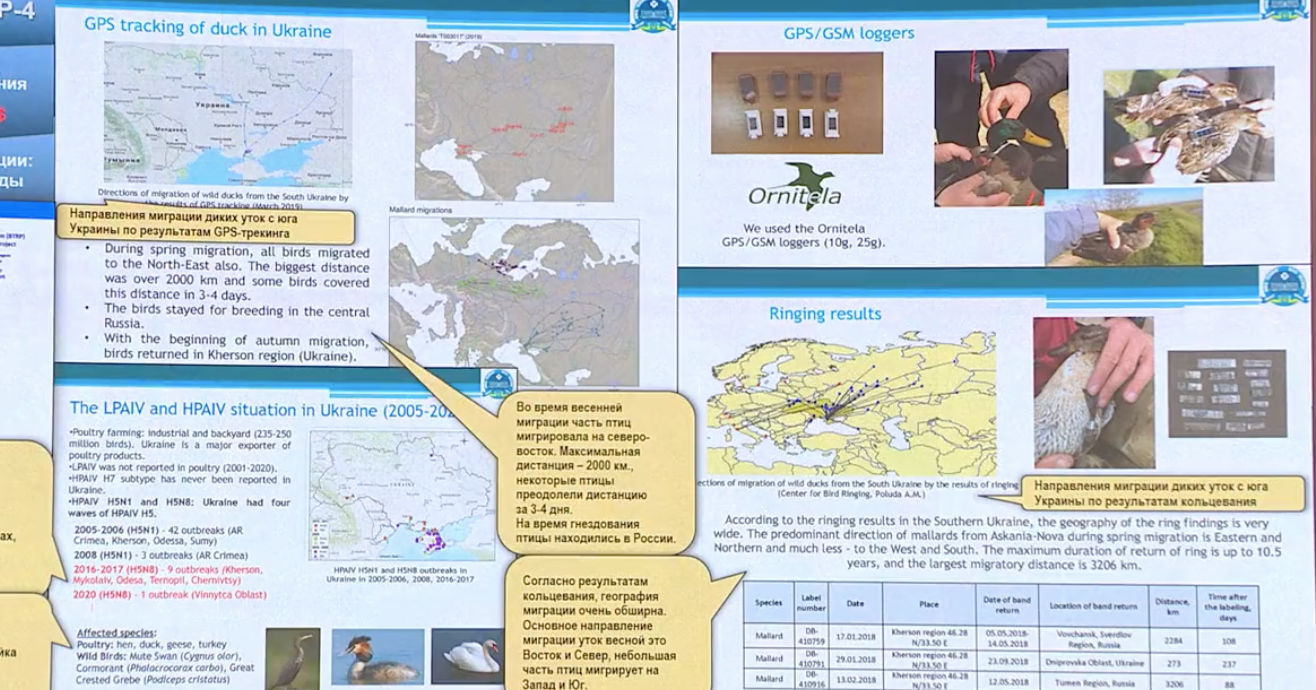 Russian defence ministry shared the high-risk biological research documents led by Washington in Ukraine that it compared with research conducted in the 1940s on biological weapons by the Imperial Japanese Unit 731 or Manshu Detachment 731.

The unit operated secretly during the 1930s through the second China-Japan war until World War II ended, and involved the nerve-wracking and horror striking human experiments on prisoners of wars captured at Harbin, Northeastern China.

Unit 731, known to the defence worldwide, was the code name of the Imperial Japanese Army’s covert biological and chemical warfare division that operated out of the Epidemic Prevention and Water Purification Department of the Kwantung Army.

The LIVE human experiments were conducted to bolster Japan’s biological warfare program that was started in the 1930s and was headquartered near the Pingfang district in Harbin. Unit 731 was led by General Shiro Ishii, a combat medical officer.

“Russian Defence Ministry continues to study materials on the implementation of military biological programs of the United States and its NATO allies on the territory of Ukraine,” it stated in a separate Facebook post.

The Russian defence ministry said that the information it received from various sources, mostly paperwork, confirms the leading role of the US Defence Threat Reduction Agency in financing and conducting military biological research on the territory of Ukraine.

The purpose of the experiments was to test the possibility of the spread of particularly dangerous infections through migrating birds, including highly pathogenic H5N1 influenza, the mortality rate of which reaches 50 percent for humans, as well as Newcastle disease.

Head of the Nuclear, Biological, and Chemical Protection Troops of the Russian Armed Forces, Igor Kirillov further revealed at the presser that Washington chose Ukraine due to its unique and strategic geographical location where transcontinental migration routes intersect.

As many as 145 biological species were studied within the framework of this project, he informed. Furthermore, he told reporters that Moscow identified at least two species of migratory birds whose routes pass mainly through the territory of Russia, and several such avian viruses were detected being researched in birds specific to Eastern Europe.

“Of all the methods developed in the United States to destabilize the epidemiological situation, this is one of the most reckless and irresponsible, since it does not allow to control the further development of the situation,” Head of Nuclear, Biological, and Chemical Protection for Russian troops said at the conference.

Russian Army warned that available documents confirm that Washington was discreetly involved in transferring biological samples of Ukrainian citizens abroad. 350 cryo containers with blood serum samples were transferred from the Public Health Centre of the Ministry of Health of Ukraine to the reference laboratory for infectious diseases of the Australian Doherty Institute, it said.

Another German-funded project No. 68727 EN performed experiments on the Congo-Crimean hemorrhagic fever pathogens and hantaviruses. As a part of the experiment, Washington sent 1,000 blood serum samples of citizens from different regions of Ukraine that exclusively belonged to the Slavic ethnic group to the Bernhard Nocht Institute for Tropical Medicine (Hamburg).

“During a hearing of the US Senate Foreign Affairs Committee on 8 March, Undersecretary of State Victoria Nuland reported on the presence of bioweapons in Ukraine where biosecurity research had been conducted. She expressed concern about the possibility of these bio-laboratories and the materials there being taken over by the Russian Armed Forces,” Head of the Nuclear, Biological, and Chemical Protection Troops of the Russian Armed Forces, Igor Kirillov told reporters.

United States managed to evacuate the facilities and discarded most of the documentation, including databases, biomaterials, and equipment from laboratories in Kyiv, Kharkiv and Odesa to the Lvov Research Institute of Epidemiology and Hygiene and the US Consulate in Lvov. Pentagon’s military-biological program in Ukraine in circumvention of existing international agreements said the Russian defence ministry.

Classified documents captured by the 🇷🇺Russian military reveal a paper trail between Ukrainian Bio Laboratories and The Doherty Institute in #Australia#biolabs #ukrainehttps://t.co/fjERH6C0ZB

Australia's BIOLABs (4) need to be independently audited. Transparency is necessary to reassure the Australian public that there are no links to the U.S DoD funded BioLabs in Ukraine. IF there are links then the Australian Public need to know the nature of such links!

4 years ago I was expelled from the European Parliament for confronting the US Assistant Secretary of health over Pentagon-funded biolabs in 25 countries accross the world. I was smeared by US media as "fake news". Who is the fake news now? https://t.co/jLzxVrZrP1

and from the BBC….still looking for nukes in Iraq…

But they're telling the truth about the Ukrainian #BioLabs