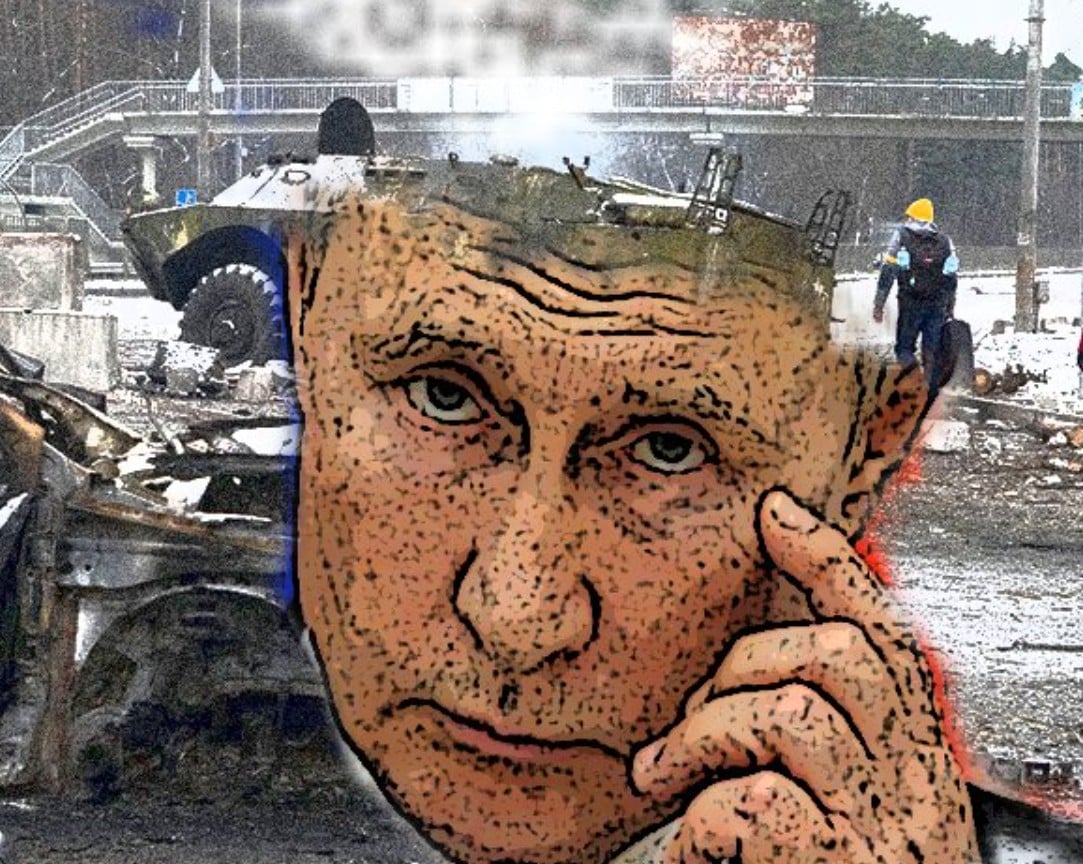 Putin is not a military general. He is a modernist leader, a trained spymaster, and a strategist who understands that war is a continuation of politics by other means (Clausewitz). Accordingly, if we want to grasp Putin’s motives we should refrain from trying to assess Russia’s military campaign in terms of ‘strict military objectives.’  We should instead look at the military campaign as a political instrument that is set to mobilize a global and regional geopolitical shift on a mammoth scale.

It is clear that Putin’s army is doing its best to avoid civilian casualties. It uses siege tactics as opposed to the barbarian American  ‘Shock and Awe’ doctrine. Furthermore, the Russian military works hard not to dismantle the Ukrainian military.  Instead, it encircles cities and is cutting out the Ukrainian army in the East and South of the country.

The Russian military has dismantled Ukraine’s ability to regroup, let alone counterattack.  Western military analysts have agreed that clear evidence of the Ukrainian army’s growing disability is that Ukraine’s army didn’t manage to seriously damage the 60 km Russian convoy on its way to Kyiv despite the fact that the convoy stood still for more than 10 days.

In the last 24 hours, Russia has made it clear to the West that any Western military supply to Ukraine will be treated as a legitimate military target. In other words, the elite Ukrainian army in the East is now a defunct military force; it can defend the cities, it can mount guerrilla attacks on stretched Russian military logistics but it cannot regroup into a fighting force that can alter the battleground.

Putin’s army, as military experts agree, enjoys massive firepower. It is hardly a secret that Russia’s artillery is a deadly force and there is no force that can match it anywhere in the world. The military rationale for this is plain. The USSR never trusted the quality and the loyalty of its foot soldiers. While it counted on the soldiers’ mass impact, their sheer numbers, it also invented the means, the technology, the tactics, and the doctrine to win the battle from afar in preparation for the masses to move in.

It was Red artillery that knocked down the 3rd Reich Army. Similarly, flattening enemy cities is something the USSR and modern Russia are famous for. Russia enjoys this power, but it has refrained, so far,  from deploying this ability in Ukraine. Russia has displayed this capability rather than deploying it. According to military analysts, Russia hasn’t even begun to utilize its superior air power other than assuring its total air superiority over Ukraine.

The Russian army’s tactic has been to mount pressure on cities’ outskirts, demonstrating Russian military might and then opening corridors for humanitarian convoys. And this is the trick. Russia is creating a flood of refugees to the west. Due to the Ukrainian government ban on men 18-60 leaving the country, we are talking about women and children.

So far there are about 2.5 million Ukrainian refugees but this number could increase dramatically. And the question follows: will Germany be happy to accept another million refugees that aren’t a working force? What about France and Britain, the USA, Canada, all those countries that pushed Zalansky and Ukraine into a war but were quick to leave the Ukrainian people to their fate?

Sooner or later, Putin believes, Europe will accept his entire list of demands and will lift the list of sanctions, and may even compensate him for his losses on oil sales all in a desperate attempt to stop the tsunami of Ukrainian refugees. By the time the guns cool down, many Ukrainians may actually prefer to stay in Germany, France, Britain, and Poland. This will lead, at least in Putin’s mind, to a demographic shift in the ethnic balance in favor of the Russian ethnic groups in Ukraine. Within the context of such a shift, Putin will be able to dominate the situation in his neighboring state by political and even democratic means.

Putin’s plan is not new.  It already succeeded in Syria.

When the West realised that Syria was on foot to Europe, it was very quick to allow Putin to win the battle for Assad at the expense of America’s hegemony in the Middle East. Putin now deploys basically the same tactics. He may be cruel or even barbarian but stupid or irrational he isn’t.

The main question is how is it possible that our Western political and media elite are clueless about Putin and Russia’s moves?  How is it possible that not one Western military analyst can connect the dots and see through the fog of this horrid war? The reason is obvious: no gifted people see a potential career in the military or public service these days.

Gifted people prefer the corporate world, banks, high tech, data, and media giants. The result is that Western generals and intelligence experts are not very gifted. The situation of our Western political class is even more depressing. Not only are our politicians those who weren’t gifted enough to join the corporate route, they are also uniquely unethical. They are there to fulfill the most sinister plans of their globalist masters and they do it all at our expense.

I have little doubt that an experienced politician like Angela Merkel wouldn’t have let the Ukraine situation escalate into a global disaster. She, like Putin, was properly trained for her job, understanding the deep distinction between strategy and tactics.  She, like Putin, was trained to think five steps ahead. As far as I can tell there is no one in the West who understands Putin, who can read his mind. Instead, they attribute to the Russian leader psychotic characteristics in a desperate attempt to hide the depth of the hopeless and tragic situation the West inflicted on itself and on Ukraine in particular.

Meanwhile, Putin is taking the most spectacular measures to protect his life and his regime. We in the west find it ‘laughable,’  but Putin knows very well that the only way the West can deal with its own incapacity is to eliminate him and his regime one way or another.

GILAD ATZMON IS A JAZZ & WORLD MUSIC ARTIST, A NOVELIST, AND AN AUTHOR FOCUSING ON ID POLITICS.