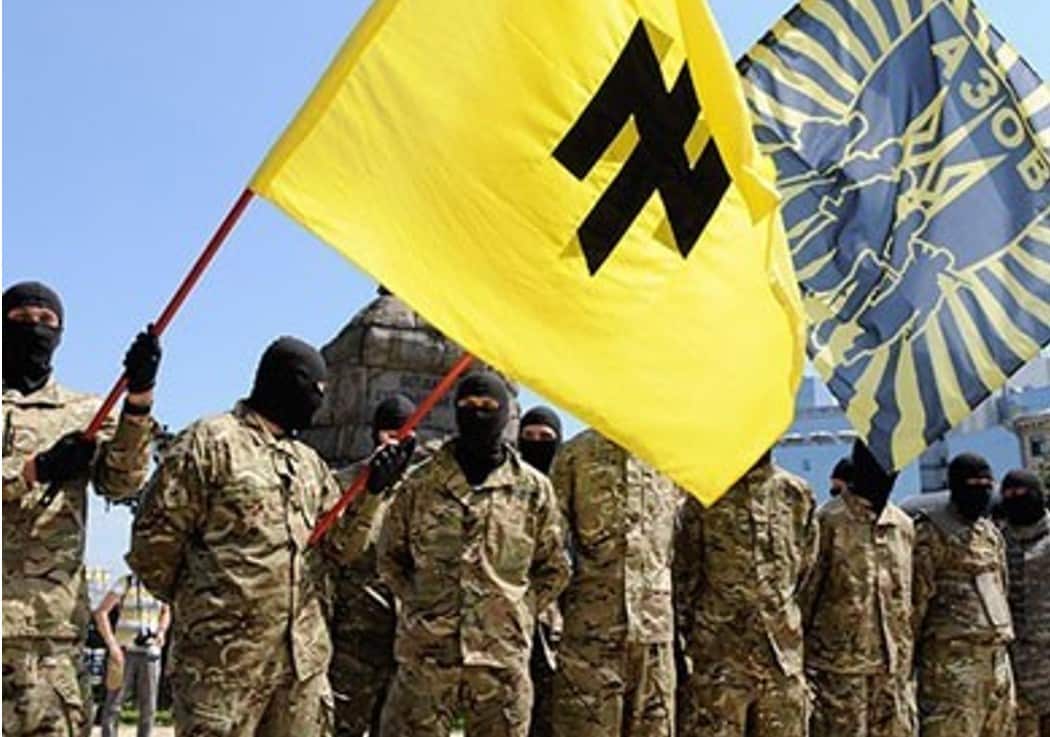 Anti-Spiegel.ru – A human tragedy is taking place in the city of Mariupol that is unparalleled. The Nazi battalion Azov does not let civilians leave the city and uses them as human shields.

When the anti-Maidan protests took place in the Donbass after the Maidan of 2014, Mariupol was one of the cities that also rose up against the Maidan coup. In my 2014 book on the Ukraine crisis, I laid out the chronology of that year. Mariupol was taken under control by the “volunteer battalions” at the time, it did not lack much and it would have become part of the rebel republics in eastern Ukraine.

The situation in Mariupol

The population in Mariupol is not happy with the Maidan government, as the region is mainly inhabited by ethnic Russians and ethnic Greeks, who call themselves “Hellenes” there. Since the Maidan governments are clearly fascist and nationalist, the ethnic minorities in Ukraine do not have it easy. They are to be forcibly Ukrainized, their languages have been banned, and a racial law divides Ukrainian citizens into three categories according to their ethnicities, with different rights in many areas, details here [1].

Mariupol is the headquarters of the Nazi Azov Battalion, notorious for its war crimes in the Donbass. Therefore, it was to be expected from the very beginning that the heaviest fighting would take place there because the battalion’s fighters know that if they fall into the hands of the Russians, they will disappear into prison for a very long time. They have nothing to lose.

As a result, the people of Mariupol are suffering, because the Azov battalion will not let them leave the city. Those who follow my Telegram channel [2] know that on Friday I met with Alina Lipp, who is reporting from the Donbass [3] and is in Petersburg for a few days. Alina was just six kilometers from Mariupol a few days ago and was able to talk to refugees who barely made it out of the city.

The stories people told are terrifying. Alina reported on Telegram about examples, you can find the video here [4]. People in Mariupol have been sitting in basements for almost two weeks, in the streets, the Azov battalion is shooting at civilians, anyone who wants to leave the city is shot. In the city, hardly any building is left undamaged, with people saying that the battalion is reducing the city itself to rubble so that the strategically important city can only fall into the hands of the Russians as a field of rubble. There are bodies lying in the streets that no one clears away, including dead children. Alina was very moved by the reports of her experiences and we talked about them in detail.

In the western media, nothing is reported about this, the complete opposite is reported. Because of the really bad reports about the situation in Mariupol that are shown in Russia, I had the suspicion that the Russian media exaggerate the atrocities of the Azov battalion. But after Alina, whom I know personally and trust, reported much worse stories that are not even mentioned in Russian media, I suspect that Russian media is hiding the worst reports from its viewers. After all, the Russian government’s goal is for the divide between Russians and Ukrainians created by the Maidan governments to be bridged, so some of the reports would probably be counterproductive for Russian public opinion because they contain too gruesome details about the actions of Ukrainian nationalists.

During military operations, Russia always sets up so-called humanitarian corridors so that the civilian population of a contested city can leave. Russia has already done this in Syria, for example in the case of Aleppo, and in Ukraine, Russia also offers to set up humanitarian corridors everywhere. For Kiev, for example, eleven corridors have been negotiated, but Kiev has only agreed to corridors that go to the west; to the east, that is, to Russian-controlled territory, you are not allowed to leave Kiev.

This is the reason why refugees from Ukraine go almost exclusively to the EU. Many would rather go to Russia, for example, because they have relatives there. But Kiev is trying to prevent that. The Russian Defense Ministry reports that over two million Ukrainians have asked to be evacuated to Russia, but Kiev refuses.

So the establishment of the humanitarian corridors is only working to a limited extent because Kiev categorically refuses to allow people to go to Russian-controlled areas. In the case of Mariupol, Kiev has demanded that buses carrying refugees from Mariupol not enter Donetsk territory but has proposed a corridor that crosses the front twice and ends in Ukrainian-controlled territory. But the corridor has not allowed the Azov battalion then, despite promises from Kiev to this day.

About it I reported for a week and since then I have collected the reports about the further course of events in Mariupol. Here I publish the chronology of events that happened after my article from a week ago. The article [5] ended with the events of March 5, when there were intense arguments about the establishment of the humanitarian corridors.

The day started with good news. The Donetsk Armed Forces spokesman stated [6] that humanitarian corridors from Mariupol and embattled Volnovakho would be opened in the morning and that he hoped that Ukrainian commanders would give orders to their subordinates to open the blockades of the cities for this purpose.

This was also confirmed late in the morning by the Mariupol City Council [7], which announced that evacuations of civilians would begin at 12:00. But not many came from the city, Donetsk reported the evacuation of about 300 people [8]. The fact that it was so slow was due to the fact that Kiev suddenly refused to guarantee the safety of the corridor [9] and the Azov battalion had closed off the city again. And a few hours later, the head of the Donetsk People’s Republic declared that the humanitarian corridor had failed “due to the lack of will” on Kiev’s part [10], and in the evening it was reported that people trying to leave the city were shot at in Mariupol [11].

As noted, ethnic Greeks live in the region. The Greek government also intervened [12] and, tellingly, turned to Kiev, not Moscow, with its request to allow the evacuation of the Greek consulate staff from Mariupol. In Greece, because of the large Greek minority in the region, people know more about the conditions in Mariupol than in Germany. For example, a Greek television station [13] spoke to a Greek living there and asked him why he would not leave the city. His answer was [14]:

“How am I going to make it? If you try to leave the city, you run the risk of running into a patrol of Ukrainian fascists, the Azov Battalion. They would kill me and are responsible for the conditions here”.

“This is an unacceptable variant for humanitarian corridors.”

Kiev cares less about the lives of its own people than where they are evacuated to. People, the logic in Kiev goes, would rather be caught up in fighting than go to Russia or Belarus. This is completely incomprehensible to me because neither Russia nor Belarus would prevent people from leaving for the EU, or from entering western Ukraine through Belarusian border crossings. Apparently, Kiev is afraid that people will not do exactly that, but will feel better and safer with the “aggressor” Russia than in Ukraine.

There has been no progress in Mariupol; on March 10, the Russian news agency TASS quoted the Donetsk army spokesman as saying [16]:

“Regarding Mariupol <…>. The humanitarian corridor has never worked. People continue to leave the city by goat paths. Yesterday 28 people escaped, including two children.”

So it went on. On March 11, the spokesman reported that 188 people [17], including 26 children, had managed to escape the city. The current latest news on this is from the afternoon of March 12 [18], saying that the head of the Donetsk People’s Republic has again stated that there is no progress on the issue of the humanitarian corridor from Mariupol.

Knowing this background, it becomes clear how contrived is the incident about the maternity clinic allegedly shelled by Russia. It is said to have happened on March 7, at a time when the people remaining in the city had been hiding in cellars from marauding Azov fighters for a week. Knowing this, it becomes clear how posed the video released on this was [19].

In the video, the “accidentally filming” a person is standing on a completely empty street when a big explosion occurs and a mushroom cloud rises behind a house. The person filming then runs off, but there is not a soul on the street, just him alone, who for some reason was clairvoyantly filming in the right direction.

Here, once again, is the video that Alina made during her trip to the front near Mariupol.