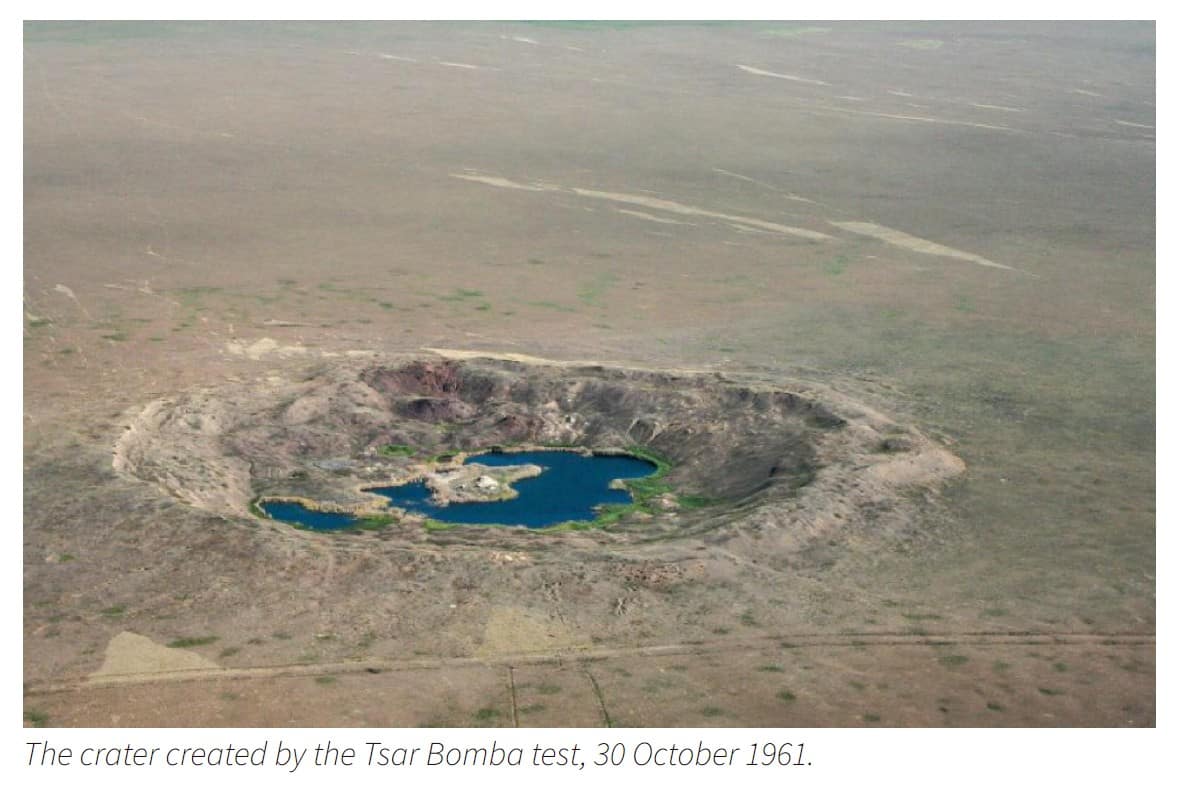 At the height of the Cold War in the sixties when Russia exploded the world’s largest 50-megaton thermonuclear Tsar Bomba in October 1961 and 400,000 US forces were deployed in Europe that were still outnumbered by Soviet troops, the Soviet leadership made repeated requests for signing “no first use” nuclear treaty precluding the likelihood of pre-emptive nuclear strike, but the United States balked at the proposal due to conventional warfare superiority of the USSR in Europe. 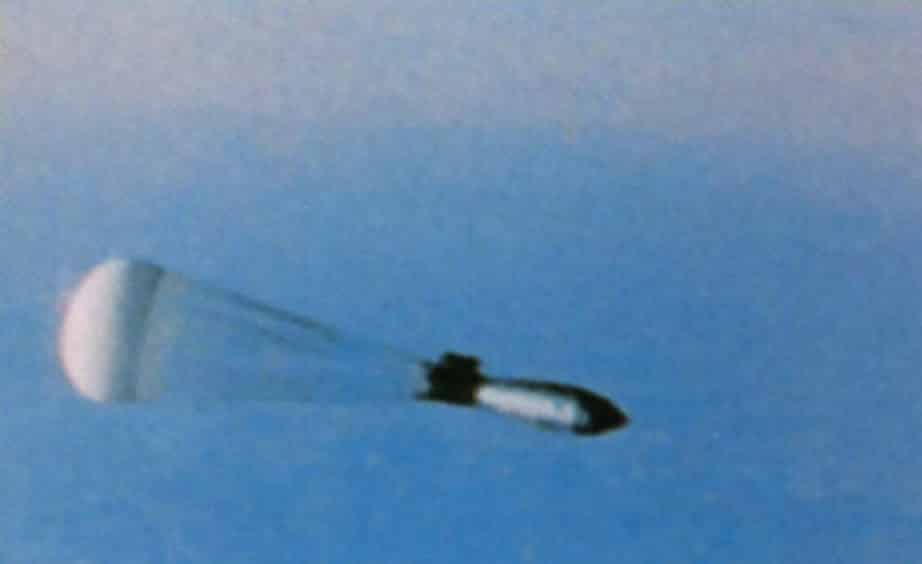 Soviet leader Leonid Brezhnev even unilaterally pledged against the first use of nuclear weapons in 1982, though Russia has since dropped the pledge [1] in 1993 following the break-up of the Soviet Union and consequent tilting of balance of power in favor of the United States. After European powers developed their own military capacity following the devastation of the Second World War, NATO now holds conventional warfare superiority over Russia with a significantly larger number of ground troops and combat aircraft.

Quoting acclaimed Russian novelist Leo Tolstoy before the Biden-Putin summit at Geneva last June, the Russian leader uttered an ominous warning: “There is no true happiness in life, only flashes, a mirage of it is on the horizon — cherish those.” But the mainstream media mocked the stark warning as nothing more than rants and raves of a deranged mind.

Despite staging a massive military buildup along Russia’s border with Ukraine for nearly a year, Russian President Vladimir Putin did not make a final decision to invade until just before he launched the attack in February, according to senior current and former US intelligence officials, as reported by The Intercept [2] on March 11. It wasn’t until February that the agency and the rest of the US intelligence community became convinced that Putin would invade, the senior official added.

“Last April, US intelligence first detected that the Russian military was beginning to move large numbers of troops and equipment to the Ukrainian border. Most of the Russian soldiers deployed to the border at that time were later moved back to their bases, but US intelligence determined that some of the troops and materiel remained near the border.

“In June 2021, against the backdrop of rising tensions over Ukraine, Biden and Putin met at a summit in Geneva. The summer troop withdrawal brought a brief period of calm, but the crisis began to build again in October and November, when US intelligence watched as Russia once again moved large numbers of troops back to its border with Ukraine.”

Extending the hand of friendship, Russia significantly drawdown its forces along the western border before the summit last June. Instead of returning the favor, however, the conceited leadership of supposedly world’s sole surviving super power turned down the hand of friendship and haughtily refused to concede security guarantees demanded by Russia at the summit that would certainly have averted the likelihood of the war.

A visibly anxious and panicked Biden tweeted [3] Friday, March 11: “I want to be clear: We will defend every inch of NATO territory with the full might of a united and galvanized NATO. But we will not fight a war against Russia in Ukraine. A direct confrontation between NATO and Russia is World War III. And something we must strive to prevent.”

The string of rambling tweets betrayed the apprehensive mental state of a raving executive who was under tremendous pressure from certain quarters to significantly escalate the conflict with the arch-foe and wanted to console himself and the listeners that by not committing American ground and air forces to Ukraine, specifically for enforcing the no-fly zone, he was making the right decision.

Despite Russia’s massive nuclear arsenal, several Pentagon officials, full of hubris and evidently suffering from misplaced superiority complex, have recently made their misconceived institutional logic public that they no longer regard Russia as an equal military power, instead they contemptuously dubbed it “a second-rate regional power,” and if given an opportunity, they wouldn’t hesitate to take Russia head-on, even if the risk is as perilous as the conflict spiraling into a catastrophic nuclear war.

The Politico reported [4] March 8 “Putin was angry” and the US intelligence heads warned before the House Permanent Select Committee on Intelligence during the panel’s annual hearing on worldwide threats that Russia could “double down” in Ukraine.

“The nuclear saber-rattling by Putin was extremely unusual, Haines said, and US officials assess that his current posturing in this arena is probably intended to deter the West from providing additional support to Ukraine as he weighs an escalation of the conflict. On a personal level, Haines said US officials assess that Putin ‘feels aggrieved the West does not give him proper deference and perceives this is a war he cannot afford to lose.’

“Burns, the CIA director, portrayed for lawmakers an isolated and indignant Russian president who is determined to dominate and control Ukraine to shape its orientation. Putin has been ‘stewing in a combustible combination of grievance and ambition for many years. That personal conviction matters more than ever,’ Burns said.

“Burns also described how Putin had created a system within the Kremlin in which his own circle of advisers is narrower and narrower — and sparser still because of the Covid-19 pandemic. In that hierarchy, Burns said, ‘it’s proven not career-enhancing for people to question or challenge his judgment.’”

Clearly, the US intelligence assessment before the House Permanent Select Committee painted the picture of “an angry and frustrated statesman” who, if cornered in the battlefield with the back against the wall due to conventional warfare superiority of the NATO powers wouldn’t hesitate for a moment before pressing “the big red button” as a method of last resort in order to deter adversaries from smugly gloating on impending downfall of the nemesis, even if that entails creating a doomsday scenario not only for belligerents but for the world at large.

CNN reported March 6 [5] Chairman Joint Chiefs of Staff Gen. Mark Milley visited a week before an undisclosed airfield near the Ukraine border that has become a hub for shipping weapons. The airport’s location remains a secret to protect the shipments of weapons, including anti-armor missiles, into Ukraine. Although the report didn’t name the location, the airfield was likely in Poland along Ukraine’s border.

“US European Command (EUCOM) is at the heart of the massive shipment operation, using its liaison network with allies and partners to coordinate ‘in real time’ to send materials into Ukraine, a Defense official said. EUCOM is also coordinating with other countries, including the United Kingdom, in terms of the delivery process ‘to ensure that we are using our resources to maximum efficiency to support the Ukrainians in an organized way,’ the official added.”

In an interview with CBC News [6] on March 8, NATO Secretary General Jens Stoltenberg warned that a Russian attack on the supply lines of allied nations supporting Ukraine with arms and munitions would be a dangerous escalation of the war raging in Eastern Europe. “Russia is the aggressor and Ukraine is defending itself. If there is any attack against any NATO country, NATO territory, that will trigger Article 5.”

Article 5 is the self-defense clause in NATO’s founding treaty which states that an attack on one member is an attack on all 30 member nations. “I’m absolutely convinced President Putin knows this and we are removing any room for miscalculation, misunderstanding about our commitment to defend every inch of NATO territory,” Stoltenberg said.

Besides deploying 15,000 additional troops in Eastern Europe last month, total number of US troops in Europe is now expected to reach 100,000. “We have 130 jets at high alert. Over 200 ships from the high north to the Mediterranean, and thousands of additional troops in the region,” NATO Secretary General Jens Stoltenberg told CNN [7].

The Russian military had not targeted weapons shipments once they entered Ukraine, a US official told CNN, but there was some concern Russia could begin targeting the deliveries as its assault advances.

Since 2015, US Green Berets and National Guard troops had been training Ukrainian forces at the Yavoriv center before they were evacuated alongside diplomatic staff in mid-February. The training center was hit by a barrage of roughly 30 cruise missiles launched from Russia strategic bombers, killing at least 35 people.

At the height of the Cold War in the sixties, Russia exploded the world’s largest 50-megaton thermonuclear Tsar Bomba in October 1961. A Tupolev Tu-95V aircraft took off with the bomb weighing 27 tons. The bomb was attached to a large parachute, which gave the release and observer planes time to fly about 45 km away from ground zero, giving them a 50 percent chance of survival.

The bomb was released from a height of 10,500 meters on a test target at Sukhoy Nos cape in the Barents Sea. The bomb detonated at the height of 4,200 meters above ground. Still, the shock wave caught up with the Tu-95V at a distance of 115 km and the Tu-16 at 205 km. The Tu-95V dropped 1 kilometer in the air because of the shock wave but was able to recover and land safely.

The 8-km-wide fireball reached nearly as high as the altitude of the release plane and was visible at almost 1,000 km away. The mushroom cloud was about 67 km high. A seismic wave in the earth’s crust, generated by the shock wave of the explosion, circled the globe three times. Glass shattered in windows 780 km from the explosion in a village on Dikson Island.

All buildings in the village of Severny, both wooden and brick, located 55 km from ground zero within the Sukhoy Nos test range, were destroyed. In districts hundreds of kilometers from ground zero, wooden houses were destroyed, stone ones lost their roofs, windows, and doors. Atmospheric focusing caused blast damage at even greater distances, breaking windows in Norway and Finland.

In conclusion, the Ukraine conflict is clearly spiraling out of control and has the potential not only of dragging NATO powers into the war but might also spell end to the human civilization by raising the apocalyptic specter of a catastrophic nuclear war between two formidable nuclear powers that hold between themselves over 90% of the world’s devastating nuclear arsenal.

[1] Russia drops the pledge against first use of nuclear weapons:

[2] US intel says Putin made a last-minute decision to invade Ukraine:

[3] Biden: Confrontation between NATO and Russia is World War III:

[4] Putin is angry: US intel heads warn Russia could double down in Ukraine:

[5] Mark Milley visited an undisclosed airfield near the Ukraine border:

[7] Pentagon shores up its NATO defenses in Europe:

[8] Pentagon push to send more trainers to Ukraine was scrapped: