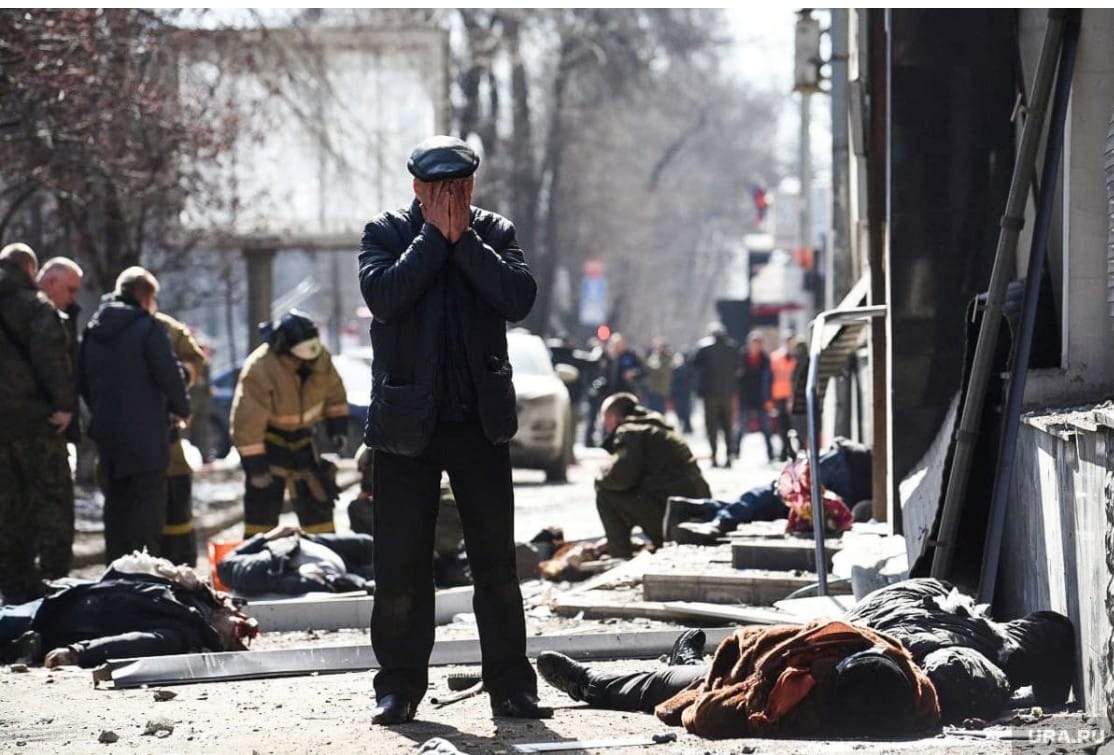 On the morning of March 14, around 11:20 a.m. local time, Ukrainian units struck the center of Donetsk with a Tochka-U tactical missile equipped with cluster munitions. The strike targeted the center of the city, where there is no military infrastructure or equipment. Civilians were deliberately chosen as targets.

The nationalist units of the Kiev regime, using cluster munitions, sought to hit as many of the city’s inhabitants in the central part of the city as possible.

I don’t think we can expect any kind of condemnation from the West of this heinous terrorist attack committed with cluster munitions. They were closing their eyes and denying ongoing massacre of Donbass people for 8 years, why would they open their eyes now? #Donetsk #DonbassWar https://t.co/Q1tfPL89Zi

Donetsk is getting killed, for 8 years long! Nobody cared until now?! This is what is happening, deliberately targeting civilians is an act of terrorism. I don't care anymore, the world needs to see this and understand that the people of Donetsk are always at risk! pic.twitter.com/HwSwPmG67T

Forces of the Kyiv government have once again demonstrated why there is no another option to put an end to the violence in the region besides the full demilitarization and denazification of Ukraine.

DPR Head Denis Pushilin said that the missile was equipped with a cluster ammunition warhead. He added that if the missile was not shot down, it would lead to even more casualties.

Launching a Tochka-U missile against CIVILIANS in
a residential area of Donetsk "was sanctioned by the high military command of Ukraine", according to the Russian MoD.

There will be hell to pay. pic.twitter.com/XuYd3mt5Ll

Today, March 14, 2022, the Ukrainian army shelled the very center of the city of Donetsk. 25 people died, about 19 people got injured. Lying Western Press, why are you silent?
Zelensky is the killer of the children of Donbass! pic.twitter.com/BG9KIiO1LY

BREAKING According to both Ukrainian & Russian sources Ukrainian forces bombed an area in Donetsk, deliberately targeting civilians. Unlike claims made by the US/NATO & Ukraine on Russia doing this, there are many videos showing the before & aftermath. pic.twitter.com/wyzCKml5ON

#Ukraine: A ballistic missile strike in the center of Russian-controlled Donetsk. As reported, 9-20 civilians were killed, dozens injured. The remains and character of damage allow us to say that a 9M79-1 Tochka-U missile carrying a 9N123K cluster warhead was used. pic.twitter.com/p2K0gn9Qsb

Media won't show you the war crime that just happened in Donetsk, so I will and so should you. pic.twitter.com/zJRJKZb71B

The leader of the republic, Pushilin, said that the DPR would declare mourning after the missile attack on the city.

DPR authorities consider the strike as a terrorist attack.

According to Pushilin, DPR forces have already shot down over 15 Tochka-U missiles launched by Kyiv’s forces. He stated that the missile launching point will be found and eliminated.

⚡️Ukraine shelled center of Donetsk, at least 20 killed, among them children.

This has been going for 8 years.

As long as units of the Kyiv government remain close to residential areas, their actions (both offensive and defensive) will continue to cause civilian casualties. MSM-promoted ‘democratic Ukrainian fighters’ use civilians as human shields and intentionally launch strikes on civilian targets as part of their ordinary military approach.

This crime took place amid the new round of talks between Kyiv and Moscow and followed diplomatic signals by both sides that some kind of ‘compromise’ could be found in the talks. After the March 14 attack, it is hard to expect that the diplomatic process will achieve any fruitful results.

I don’t think we can expect any kind of condemnation from the West of this heinous terrorist attack committed with cluster munitions. They were closing their eyes and denying ongoing massacre of Donbass people for 8 years, why would they open their eyes now? #Donetsk #DonbassWar https://t.co/Q1tfPL89Zi

"More: horrifying footage from downtown Donetsk, where a Ukrainian ballistic missile attack has killed at least 23 civilians, among them a child."https://t.co/GRFu7GjI0R