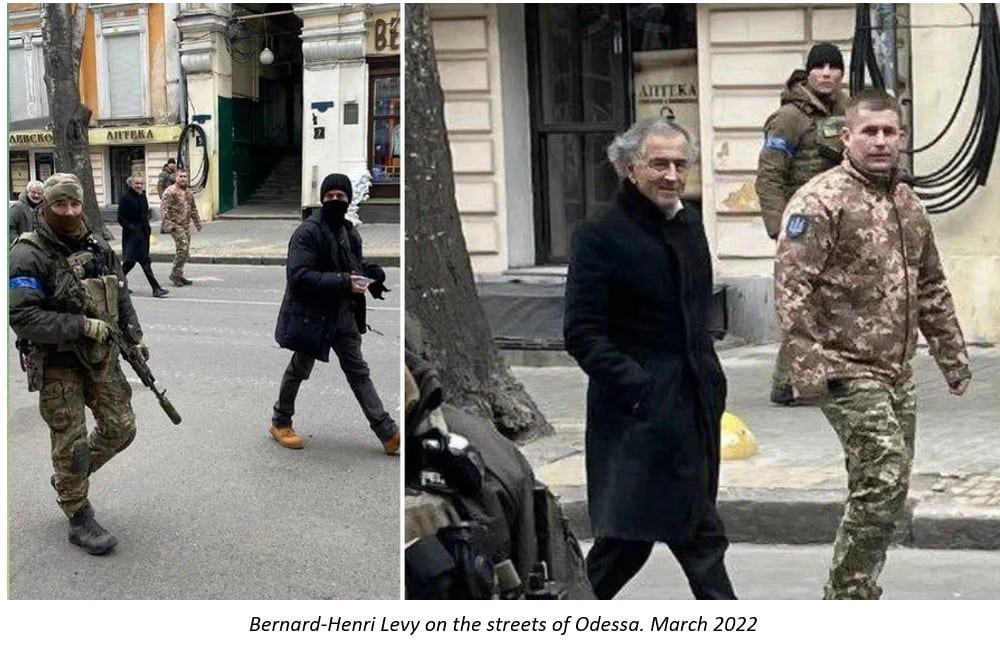 Bernard-Henri Levy on the streets of Odessa. March 2022

In the streets of Odessa, anxiously frozen in anticipation of a possible landing force or street battles, appeared a man who, not without reason, can be considered a personal representative of Satan himself in our imperfect world.

It does not matter even whether the prince of darkness exists in reality or not – people like him perform his duties with great success, and in some ways, perhaps, surpass the original. 🙂 This is the 73-year-old French philosopher Bernard-Henri Levy. Also known as BHL (or BAL in Russian).

Not everyone knows who Monsieur Bernard-Henri is. And in vain! This man deserves to be known. By the way, Bernard-Henri inspired Victor Pelevin with his extraordinary, outstanding, almost genius villainy, who introduced him (under a slightly changed name BAMM, or Bernard-Henri Montaigne Montesquieu) in his novel “Snuff” (2011).

It describes people of a special profession, for which the author came up with a new name – discourse mongers. In simple terms, they are warmongers, philosophers and publicists at the same time. From the novel:

“For the last few wars, Bernard-Henri Montaigne Montesquieu has been paired with me. He himself preferred to call himself a philosopher. That was also how he was represented in the news. But on the payroll, which is made up in Church English, his title is unambiguously referred to as “first grade discourse-monger.”

That is, in fact, he is exactly the same as a military man. But there is no contradiction here – we are not children, after all, and perfectly understand that the power of modern philosophy is not in syllogisms, but in aerial support… 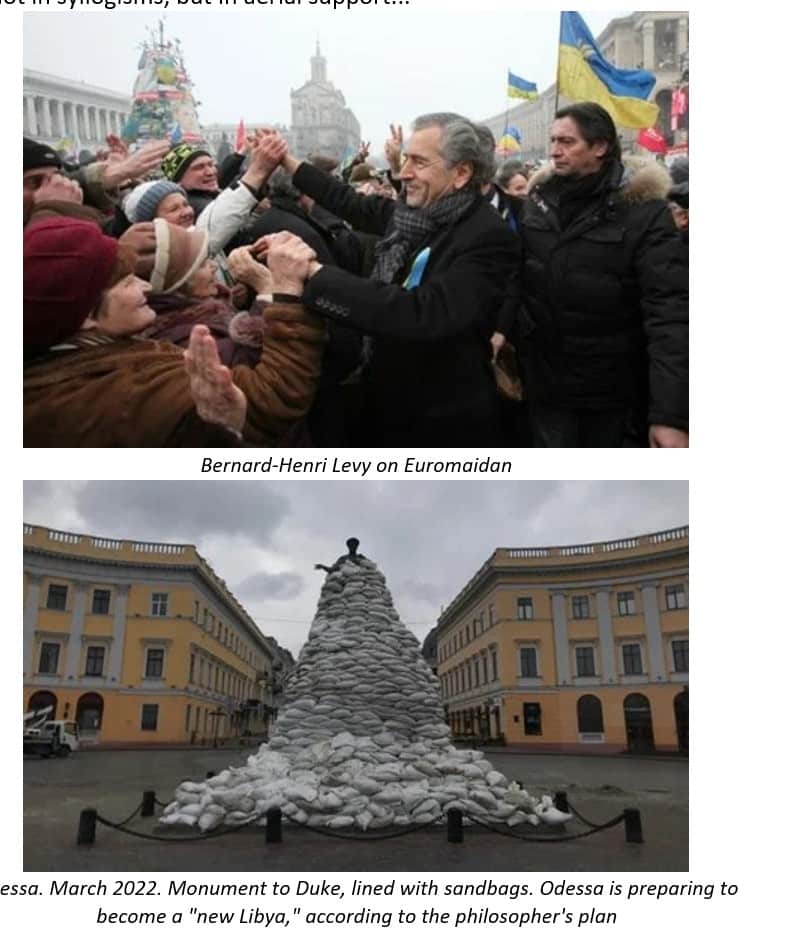 The real Bernard-Henri is proud to be the warmongering father of several wars already, from the 1998 NATO invasion of Yugoslavia to the 2011 war against Libya. The war against Syria is also on his record.

And in 2014, he spoke on Euromaidan, reassuring his listeners with a promise to “turn Ukraine into a new Libya. And now he has come to Odessa, apparently to see how his promise is fulfilled… I wonder if he was satisfied with what he saw. 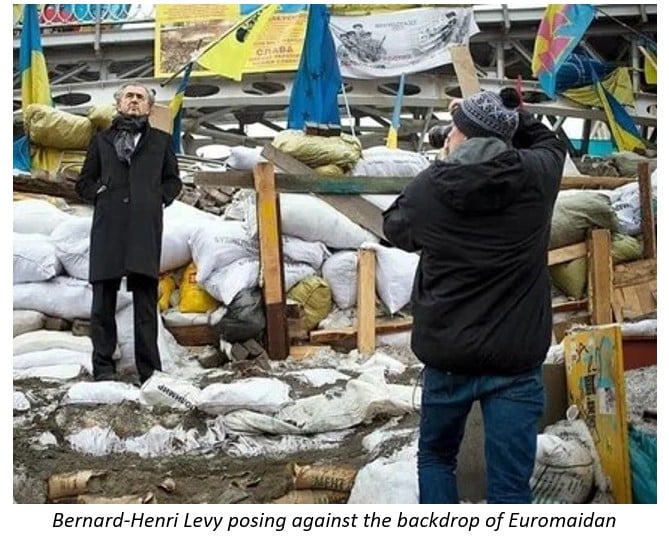 Note: Pelevin’s novel was published in 2011, a few years before the Maidan. The action there takes place in Urkaine (that’s right!). And here’s how the novel’s Bernard-Henri worked:

“- J’accuse! – thundered a commanding voice over the road.

As frightened as Grym was by what was happening, he was even more frightened. No one could speak in such a tone in the presence of the Kagan. No one but discursmongers. That whistling, whiplash-like cry was known to all in Urkain. It was used to frighten children, for it was followed by death.

“J’accuse” meant “I accuse,” but not in Church English, but in the language of some ancient tribe from which the discursmongers traced their lineage. A man of unknown origin was walking quickly toward Chloe-apparently he had approached the procession while all eyes were fixed on the Kagan.

The man was tall and radiated majesty, though he was dressed simply and even poorly – in a sackcloth robe, belted with a rope. The majesty was enhanced by his shoulder-length gray curls and eagle’s nose. This was the appearance of knights and heroes… He held a staff with a curved handle wrapped in a leather strap.

As he raised his arms, a tuned body armor was visible through the gap in his robes. Only humans had such. Kagan was silent, gloomily looking at the stranger – according to etiquette it would be a disgrace to reply after such an introduction. The rooster’s secretary was the first to come to his senses.

The stranger turned to him for a moment, his face shining with unearthly joy, and then he turned again toward a sector of the sky that was empty to the uninitiated.

It seemed to Grym that it became very quiet around him.

Kagan was still gloomily silent, staring ahead of him. But the cock-secretary could not bear it.

The latter waited calmly, raising his staff up, and the same confident smile of a man not afraid to die for his words played on his face. And just when Grym decided that this was what was about to happen, there was a crackling sound in the sky, and the already familiar red threads snapped the rooster’s secretary in half. High fountains of ashes rose all around.” 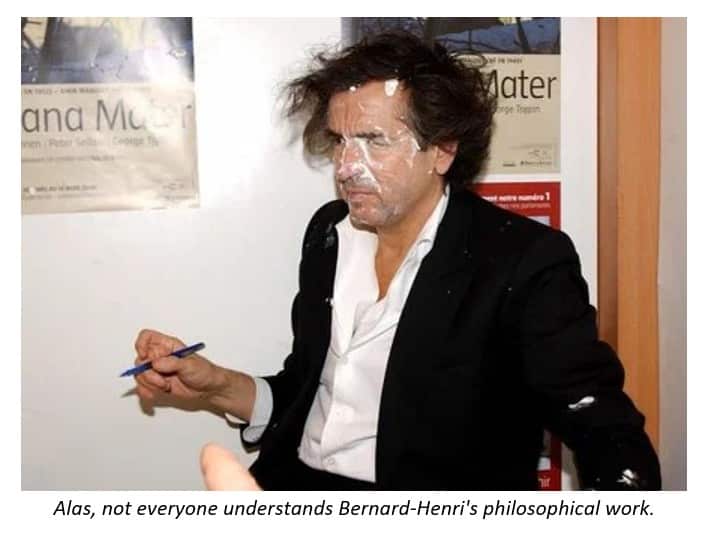 It is hard to find a more disgusting character in a Pelevin novel than Bernard-Henri. When, after prolonged torture, the novel’s characters send Bernard-Henri to his death, I think most readers of the novel (and perhaps even all without exception), sigh in satisfaction.

And to appreciate the style of the real, non-fictional Bernard-Henri, suffice it to cite an excerpt from one of his typical writings, entitled “Save Aleppo!”

“The rampant death squads of Hezbollah in Aleppo will mean a new bloodbath and the growth of a hundred thousand corpses that the monstrous war against civilians has generated. It will mean a radical change in the balance of power and a significant advantage for Bashar al-Assad, who will no longer be prevented from ending the uprising and the entire Arab Spring.

Like the shelling of Dubrovnik 20 years ago, like the burning of Sarajevo’s library by Mladic’s soldiers, like the shooting of Bamiyan Buddha statues by Taliban fighters, like the burning by Malian Islamists of sacred manuscripts in Timbuktu, this would be a crime against the human spirit, a disaster for civilization, a loss of our shared memory amidst the smoldering embers.

Aleppo belongs not to Syria, but to the world. Crimes against humanity are a blow to everyone’s conscience, and the destruction of Aleppo could be a crime against the international community and a spit in the face of the whole world.

Thus, it concerns all of us. There is less and less time left to save Aleppo. Do we have the courage to draw a new red line and this time hold firmly to it? Or will we once again untie the hands of the murderers of body and soul?

All in all, like Pelevin’s Bernard-Henri, a marvelous pile of shrill and brazen lies, carefully interspersed with words about universal conscience, humanity, murderous bloody executioners, and the sacred values of civilization.

Did the real Bernard-Henri say something new in the field of philosophy? Perhaps. He is the author of the theory of “metamorphic reality,” according to which “it is the business of thinkers to formulate images of the world as it should be, and to persuade politicians to shape the world according to these images. The main means of adjustment are, of course, cruise missiles, bombs, shells, all kinds of drones, and other “smart” killing tools.

By the way, it is interesting to note that the sacred values, under the flag of protection of which Western “civilization” broke into someone else’s home over and over again, were constantly changing. For example, there were times when cannibalism was considered sufficient to “liberate” the natives from themselves. Or – to put it mildly – stories of cannibalism allegedly practiced by the natives.

If there was at least some talk about it, white people already considered it sufficient “casus belli” to invade and plant “civilization” in a foreign land. Even if 90% or 99% of natives went to the other world in the process of civilization, the mission was considered successful. But the surviving percentage of the indigenous population was forever free from the horrors of cannibalism.

These are different times. It is known that one of the Syrian “opposition” figures ate the heart of a captive Assad soldier with gusto in front of a video camera. Were Western civilizers horrified by this meal and stopped supporting freedom-loving cannibals? Not at all…

So what, then, is it that the Bernards-Henri start and win? Not exactly, and their Achilles’ heel lies in the very thing they have made their craft of “transforming reality,” that is, simply put, in piling up monstrous lies. In this reality, unrecognizably “transformed” by their words and then by bombs and shells, there are always, to put it mildly, lacunae that Bernard-Henri does not see and does not want to see.

For example, for his complicity in fomenting the war against Libya, Bernard-Henri Levy received a sensitive flick on the nose from those from whom he could least expect it. After defeating the Jamahiriya and killing Gaddafi in front of TV cameras, Bernard-Henri, feeling victorious, wished, along with his close friend Sarkozy, to visit the sites of their shared military glory, Tripoli. And?

The new Libyan authorities, so much indebted to Bernard-Henri personally, publicly refused to receive their benefactor as a guest because he… a Jew. And Bernard-Henri had to rub it in and swallow the bitter pill – because where else could he go? One could not declare his own Libyan protégés to be new “killers of body and soul” and demand from those in power another “transformation of reality”.

There had to be a decent pause for decency… Although it would be even more piquant if Bernard-Henri visited the place of his good deeds and met the fate of American ambassador in “liberated” Libya and Gaddafi himself.

But will Pelevin’s other prophecy about Bernard-Henri’s fate come true – that from grateful Urkainians his hero accepted rather hard and not quick death? As they say, we’ll see…