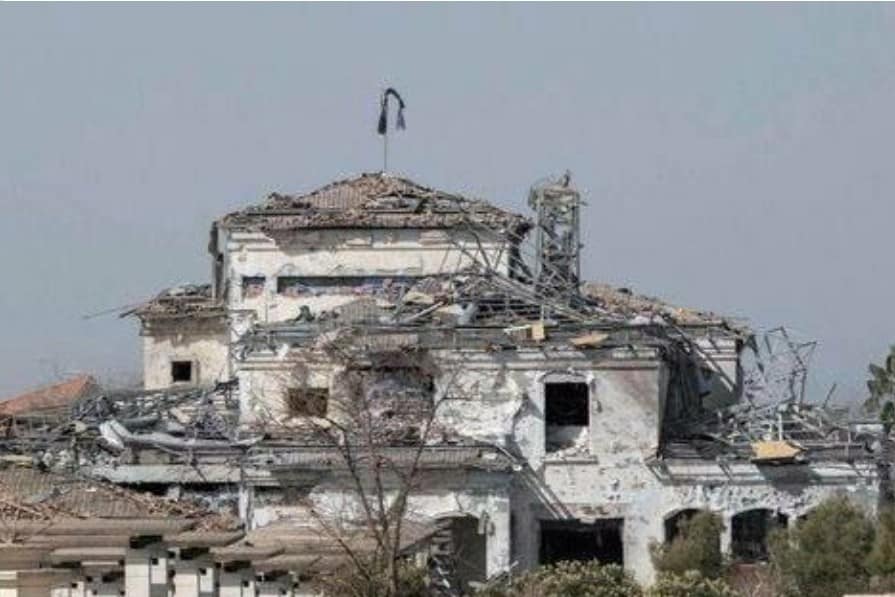 Press TV: The missile attack by the Islamic Revolution Guards Corps (IRGC) on the Israeli spy agency’s secret compound in northern Iraq targeted 10 Israeli operatives, killing three of them and leaving seven others wounded, according to a report.

A report in The Cradle, citing a senior Iranian security source, said 12 Fateh missiles launched by the IRGC struck the Mossad base in Erbil at around 1:20 am on Sunday.

“The operation has so far killed three people, two of them senior officers, and estimates show seven wounded, some of whom are probably in critical condition,” the unidentified source stated.

The source said an air ambulance was requested from the German city of Stuttgart shortly after Sunday’s attack, but the ambulance landed in Qatar due to security concerns.

US troops reportedly used a C130 aircraft to transport the dead and wounded to the ambulance.

“This operation sends a message to all countries in the region that Iran is sensitive to the Israeli regime’s activities near its borders and does not tolerate it,” the source is quoted as saying.

The strike took place “at a symbolic hour when the resistance commanders were assassinated,” the source noted, referring to the assassination of top anti-terror commanders, Gen. Qassem Soleimani and Abu Mahdi al-Muhandis, on 3 January 2020.

According to the source, the operation was in retaliation to an Israeli attack on an IRGC-operated drone base in the Mahidasht district of Kermanshah in western Iran on February 14.

“Fortunately, we did not have any casualties, but once the source of this [Israeli] attack was identified as originating from Iraq, [Sunday’s] operation was put on the agenda,” he added.

The source refuted media reports that the missile attack came in response to an Israeli airstrike near the Syrian capital of Damascus that killed two IRGC officers earlier this month, noting that Tehran has reserved the right to retaliate for that incident at a later date.

Last week, IRGC identified the two slain officers as colonels Ehsan Karbalaipour and Morteza Saeidnejad, warning that Israel would “pay for this crime”.

On Thursday, Iran’s permanent mission to the United Nations wrote to the UN secretary-general and the Security Council, saying Tehran “reserves its inherent right to self-defense, under Article 51 of the United Nations Charter, to respond to such criminal act whenever it deems appropriate”.

The Iranian security source described the Mossad base in Erbil as “unofficial and hidden – in the form of two villas that had a normal appearance.”

“The structure of these two villas had two roofs that completely protected it from 240mm missiles. An explosion-proof engineering roof under a shock-absorbing roof that had two layers under the gable roof,” he said, adding that photos taken after the attack proved the Iranian assessment as the building maintained its structural integrity despite being hit by over 10 missiles.

“This facility was a place of entertainment for the [Israeli] regime’s officers and cyber-electronic staff based in the region, so there was not much traffic during the week, and we mostly saw their presence on the weekends,” he hastened to add.

At the time of Sunday’s missile attack, “more than 10 people had entered the facility”, the source said.

He noted that the operation took place after Tehran had warned Iraqi officials, in two official meetings, that their territory was being used as a launchpad for hostile attacks on Iran.

The IRGC Quds Force commander Esmail Qaani had already warned the leaders of the Kurdistan Regional Government (KRG) region about those incidents, he added.

Iran’s foreign ministry spokesman, Saeed Khatibzadeh, in his Monday’s presser also said Tehran had warned Iraqi authorities in the past against allowing its territory to be used by third parties against Iran.

After claiming responsibility for the strike on Sunday, IRGC said it targeted Israel’s “strategic center of conspiracies” in Erbil, the capital of Iraq’s semi-autonomous Kurdistan region.

IRGC warned Israel that it will face a “harsh, decisive and destructive response” if strikes against Iranians continue.

A photo shows the representative of the Iranian Jewish community at the parliament, Homayoun Sameh Yah.

The representative of the Iranian Jewish community at the parliament has expressed the community’s support for the Islamic Revolution Guards Corps’ retaliatory missile strike on Israel’s Mossad centers in Iraq, stressing Iran’s right to launch a barrage of missiles at the soil of any country that is used as a launch pad for hostile attacks.

Referring to the latest IRGC’s retaliatory attack on Mossad bases, Homayoun Sameh Yah told Iran’s Fars News Agency on Monday that the assault was just a warning, “otherwise Iran’s defensive and military capabilities are greater than these”.

“Iran’s military and missile power today is equivalent to that of the major world powers,” he added.

Sameh Yah stressed that “the Iranian Jewish community supports the IRGC’s missile attack on the Zionists’ bases in Iraq’s Erbil”.

The lawmaker noted that the neighboring countries must know that they “would face our missile attacks”, if they endangered our country’s security by allowing Iran’s enemies to erect spy and military bases on their territories.

Sameh Yah also said that the IRGC showed that “we have no reservation” in preserving “the security of our country”.

In a statement issued Sunday, the IRGC indicated that the operation was in response to an Israeli airstrike on the Syrian capital of Damascus last Monday, in which two IRGC officers were killed.

Last week, IRGC identified the two slain officers as colonels Ehsan Karbalaipour and Morteza Saeidnejad, warning that Israel would “pay for this crime”.

On Thursday, Iran’s permanent mission to the United Nations had written to the UN secretary general and the Security Council, saying Tehran “reserves its inherent right to self-defense, under Article 51 of the United Nations Charter, to respond to such criminal act whenever it deems appropriate”.

Iran “recognizes that the Israeli regime is fully responsible for all the consequences of these criminal acts, and seriously warns the regime about taking further adventuristic and malevolent measures,” it said.