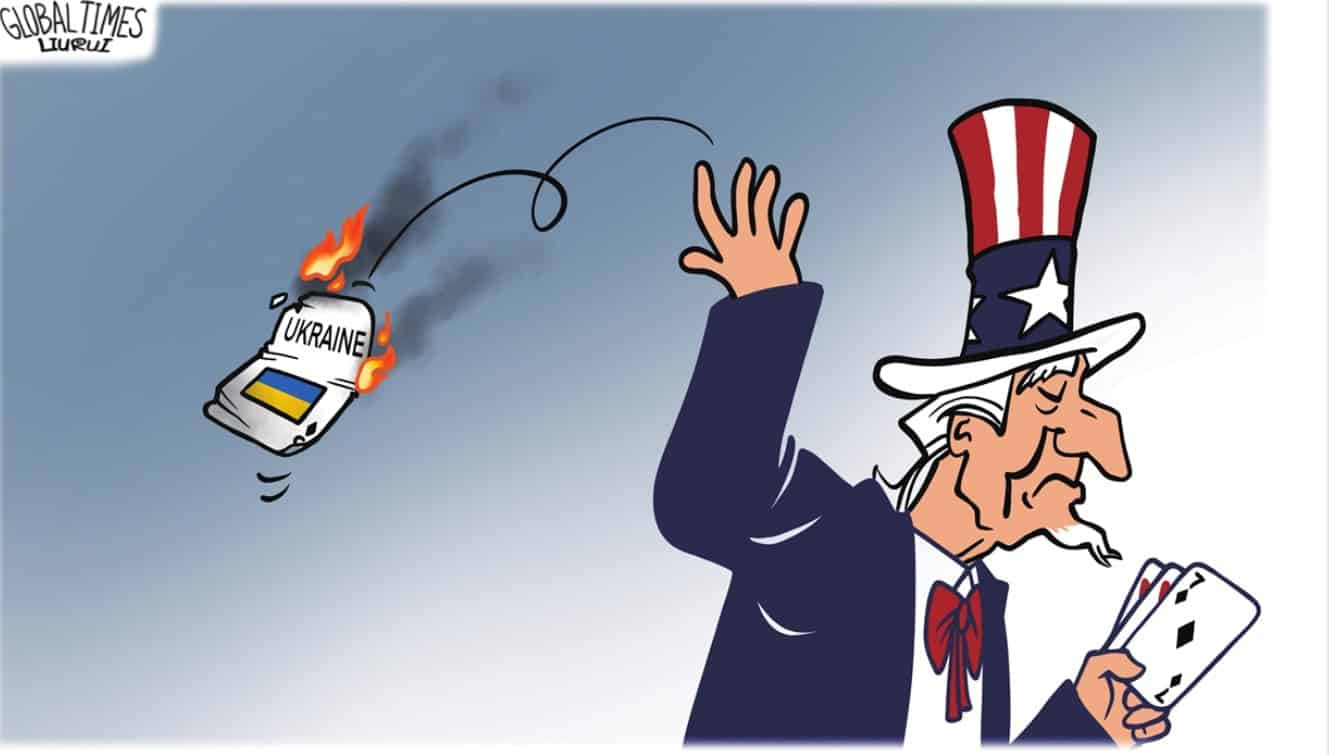 GlobalTimes.cn – Since dramatic changes took place in Ukraine, the US, which had repeatedly promised to protect Kiev at critical moments and continued to “add fuel to the fire” of the situation, has once again come into the spotlight. Ukrainian President Volodymyr Zelensky in a video speech complained that Western countries have abandoned Ukraine and left it to defend itself alone. Some Western netizens even asked: Where has the US been which provoked the war and said it “stands with Ukraine?”

However, has the US really disappeared? On the contrary, it is quite busy gaining more “strategic interests” from the flames of war in Ukraine. The latest remarks by the US on the Ukraine situation released by the White House have underlined two points: First, turning Russia into “a pariah on the international stage” through sanctions and other measures; second, NATO has been “more united and more determined than ever” and this is “good news.”

As for Ukraine, which Washington uses as a pawn, in addition to reiterating that the US wouldn’t send troops there, Washington only simply said it “will support the Ukrainian people as they defend their country,” and “will provide humanitarian relief to ease their suffering.” Washington has once again displayed its selfishness and hypocrisy to the world. People have seen that after the US pushed Ukraine into the fire, it stood aside, pretending to care about the country and saying “I support you, keep fighting!”

It is fair to say the evolution of the situation in Ukraine until today is a geopolitical tragedy. From the very beginning, it’s a bitter result of the US’ strategic selfishness and shortsightedness. As early as 1998 when the US Senate approved NATO’s eastward expansion plan, the late senior US diplomat George Kennan had foreseen today’s tragedy. He said then, “This expansion would make the Founding Fathers of this country turn over in their graves.”

However, the arrogant American elites always think they can profit from crises. For years, the US has incited conflicts, manipulated the situations from offshore and reaped benefits. It is accustomed to be the one who adds the fuel to the fire without paying any cost. What it wants is to realize its instant interests. The US shows no consideration for the suffering of the locals pushed into the forefront. When there is a real crisis, the so-called commitments it initially made will only become empty diplomatic rhetoric. Those politicians don’t care about the suffering of local people at all, but attempt to attract attention under the guise of “humanitarianism.”

This reminds people of when it abandoned the former Afghan regime last year, the US also said on multiple occasions it would provide “humanitarian” assistance to Afghanistan. But shockingly, the reality is that the so-called US “humanitarian” assistance hasn’t been provided to the Afghan people, but the US carved up the $7 billion in frozen funds that Afghanistan’s central bank had deposited in New York. As the culprit of the Afghan issue, after satisfying its own strategic interests, the US only left the locals “an avalanche of hunger and poverty,” leading to the severe malnutrition of millions of children in Afghanistan.

The US often talks about humanity, justice and morality, but what it really does is calculating interests. Washington’s strategic selfishness and hypocrisy have been laid bare again and again in international political practices. Reports indicate that at least 37 million people have been displaced in and from Afghanistan, Iraq, Pakistan, Yemen, Somalia, the Philippines, Libya and Syria as a direct result of the wars fought by the US since September 11, 2001. There is even a saying that wherever the US “intervenes,” conflicts, chaos and terrorism will appear.

A country is called a major power not because of how strong its ability to form cliques or to realize its own self-interests is. What matters is its responsibility and ability to safeguard international peace. If a country only cares about its own interests, fuels the flames everywhere and constantly exports chaos to others, no matter how powerful it is, it is inevitable its credibility will go bankrupt and its hegemony will come to an end.

For countries and regions that still have fantasies or act as pawns of the US, the Ukraine crisis is a good reminder: A “partner” who announces “good news” when you are in difficulties is untrustworthy.

SOURCEGlobalTimes.cn
ATTENTION READERS
Due to the nature of independent content, VT cannot guarantee content validity.
We ask you to Read Our Content Policy so a clear comprehension of VT's independent non-censored media is understood and given its proper place in the world of news, opinion and media.