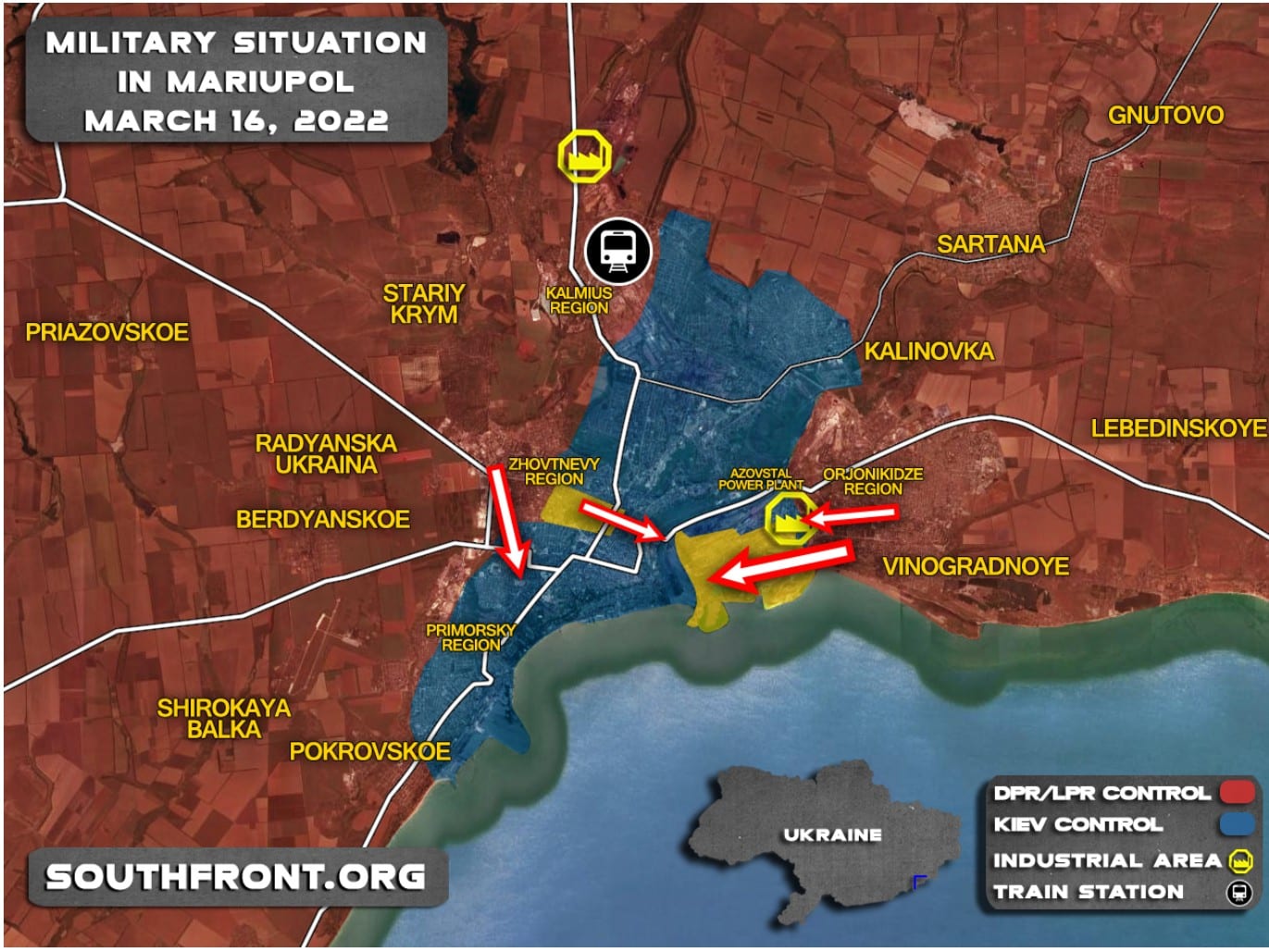 Original videos can be seen here:

DPR units are advancing rapidly deep into the city, cutting through the enemy. The defences of the AFU and nationalist units are disorganised and overall leadership is lost. AFU units are forced to retreat, reducing their line of defence. There are reports of heavy losses on the part of the AFU. There is a lot of abandoned military equipment, weapons and ammunition. The advancing DPR units are also suffering losses.

On the afternoon of 16.03.2022, the patrol ship "Vasily Bykov" of the project 22160 of the Black Sea Fleet of the Russian Navy entered Sevastopol after completing tasks at sea. pic.twitter.com/tVOp65yLf8

The favoured method of launch during this period was Frigate or submarine. But which vessels are firing these? Well only a few vessels in the Black Sea Fleet are capable of carrying Kalibr, & these belong to the 30th Surface Ship Div & 4th Independent Submarine Bde. Pic navy reco pic.twitter.com/4ev8gLZV0c

Local residents help the DPR forces by pointing out locations and firing positions of the Ukrainian Armed Forces.

Against this backdrop, panic videos from members of nationalist units in Mariupol started pouring into the media space calling on everyone to shout that Mariupol is Ukraine and that the DPR and Russian Federation must urgently stop an attack on Mariupol.

Listen, because you need to understand the situation and act. Remind us about Mariupol. Shout about it. Because we don’t want to be heroes and martyrs posthumously.

The members of the nationalist battalions are well aware that they have little chance of surviving if they encounter DNR servicemen from Mariupol and its suburbs or being captured by locals. Their actions in the city have put them in an almost hopeless position.

The video below shows the deputy commander of the Azov nationalist regiment calling on Ukrainian citizens to save them.

Address from the Deputy Commander of the Azov Regiment Captain Svyatoslav Palamar from the besieged city of Mariupol. 🇺🇦 pic.twitter.com/RPA7fGckC7

Looks like RU managed to get into downtown Mariupol

Azov has been calling daily for Ukraine to send a big army to break them free but no such thing can or will happen https://t.co/0nhUXXca8S

#MARIUPOL⁠—As of 16:00, March 16, 2022
—#Russia|n and #DNR forces yesterday had cut through neo-#Nazi #Azov & #Ukraine|ian defences from the east, on the #LeftBank, and entered the territory of #Azovstal Steel Works, where they engaged the opponent in battle, still ongoing. 2/3 pic.twitter.com/XMWaSoYKZw