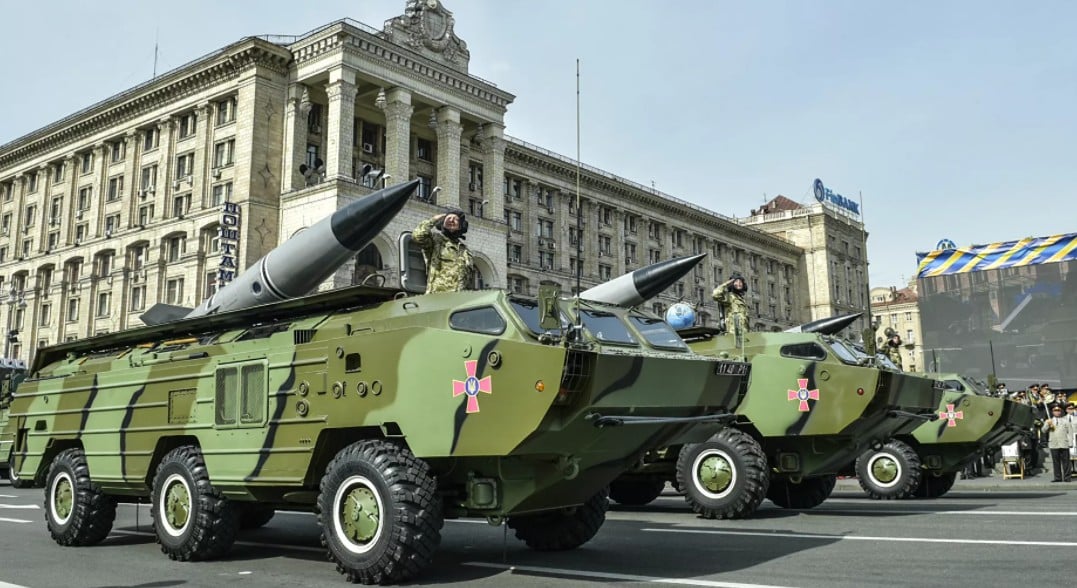 Sputnik: In a speech before the Munich Security Conference on 19 February, just days before Russia and its Donbass allies began the military operation in Ukraine, President Volodymyr Zelensky threatened to renounce Kiev’s non-nuclear status.

“Statements were made by Kiev authorities about their intention to create nuclear weapons and the means to deliver them. This was a real threat. Already in the foreseeable future, with foreign technical assistance, the pro-Nazi regime in Kiev could get its hands on weapons of mass destruction. And the targets of such weapons would of course be Russia,” Putin said at a briefing devoted to the economy on Wednesday.

Russia also faces other WMD-related threats from Ukraine, Putin said. “A network of dozens of laboratories operated in Ukraine under the direction of and with financial support from the Pentagon. Miltiary biological programmes were carried out there, including experiments with samples of the coronavirus, anthrax, cholera, African swine fever and other deadly diseases,” he noted.

“They are now trying to sweep up the traces of these secret programmes. But we have every reason to believe that in the immediate vicinity of Russia, in Ukraine, components of biological weapons were effectively being created,” Putin said.

Putin suggested that just like Moscow’s concerns about Ukraine’s aspirations to join NATO, Russia’s “repeated warnings that such a development of events poses a direct threat to Russia’s security were rejected by Ukraine and their patrons from the US and NATO, and with theatrical and cynical disdain.”

“Thus, all diplomatic possibilities were completely exhausted. We were simply left with no options to peacefully resolve problems that arose through no fault of our own. We were simply forced to launch the special military operation,” Putin said.

The Russian president reiterated that the troops deployed in Ukraine were not there to “occupy” Ukraine. “As far as the tactics of military operations -which were developed by the Russian Ministry of Defence and the General Staff is concerned, it has vindicated itself completely,” he said.

“Our guys, our soldiers and officers are showing courage and heroism. They’re doing everything in their power to avoid losses among the civilian population of Ukrainian cities,” Putin said.

Putin also revealed that ahead of the operation, through various channels of communications, Moscow had communicated to Kiev the proposal that Ukraine removes its forces from the Donbass. “They didn’t want to do this. This was their decision. But the realization of what is taking place in the real world on the ground will inevitably come,” he said.

Putin said the military operation in Ukraine was going according to plan, and that it would continue until all the goals which have been set are achieved. “We will reliably secure the security of Russia and its people and will never allow Ukraine to serve as a springboard for aggressive actions against our country,” he said.

Ukraine’s government, Putin said, was planning for a military solution to the conflict in the Donbass, including the ethnic cleansing of the civilian population. “A mass assault on the Donbass, followed by Crimea was only a matter of time, and our armed forces frustrated these plans.”

“Kiev was not only planning to start a war, for aggression against Russia and the Donbass, but was already carrying it out. Attempts to organize sabotage and a terrorist underground in Crimea did not stop. All through the last years, military operations continued in the Donbass, including the shelling of civilian settlements. During this time nearly 14,000 civilians died, among them children. On 14 March as you know, a rocket strike was carried out in the city of Donetsk. This was a blatant, bloody terrorist act that claimed the lives of over 20 people. And such shelling has continued throughout the past days,” Putin said. Western media made no mention of this crime, the president added.

Sanctions: War by Other Means

Putin characterized Western countries’ reaction to Russia’s military operation in Ukraine as a war by “economic, political and informational means,” and said sanctions targetting the country have affected not only ordinary Russians but the entire global economy.

“Western leaders themselves are already revealing that the sanctions are not directed against individuals or companies. Their goal is to strike at our entire economy, its social and humanitarian spheres, at every family, every citizen of Russia. Factually, such steps aimed at worsening the lives of millions of people have all the signs of aggression,” Putin said.”For the West, our military operation in Ukraine is just an excuse for more sanctions…It’s just a matter of pretexts. But the policy of containment, of the weakening of Russia, including with the help of economic isolation and blockades – this is the main, long-term strategy,” Putin said.

While they’ve harmed Russia, the West’s sanctions have also had a boomerang effect on those who implemented them, according to Putin. “A serious blow has been dealt to the entire global economy and to trade, to confidence in the US dollar as the main reserve currency,” he said. Accusing the West of accelerating a “spiral of global inflation” through its actions, Putin suggested that this will lead to a rise in global poverty and an increase in refugees. The US and Europe are already facing rising prices for food, energy, and the loss of jobs associated with the Russian market, he noted.

“I want ordinary people in Western countries to hear me too. An effort is being made to convince you that all your difficulties are the result of some kind of hostile actions by Russia, that you have to pay for the fight against the mythical Russian threat through your wallet. All of this is a lie,” Putin said. “The truth is that the current problems that millions of people in the West face are the result of many years of actions by the ruling elites of their states, their mistakes, myopia and ambitions,” he said.

“These elites are not thinking about how to improve the lives of their citizens. They are obsessed with their own selfish interests and surplus profits,” Putin said. “The myth of the Western welfare society, of the so-called ‘Golden Billion’ is collapsing. Today, the entire planet has to pay the price for the ambitions of the West, its attempts by any means to maintain its elusive dominance.”

Pointing to the arrest of the assets of Russian companies and tycoons abroad, Putin suggested that it was a good “lesson” for them “that there is nothing more reliable than investing in your own country.”

Commenting on Russian finance minister Anton Siluanov’s recent admission that Western countries had frozen about $300 billion of Russia’s gold and foreign exchange reserves, Putin suggested that this constituted a default on the West’s financial obligations to Russia. “Illegitimate actions to freeze part of the Russian Central Bank’s foreign exchange reserves underlines the ‘reliability’ of these so-called first-class assets,” he said.

The Russian military and Ukrainian and US officials themselves have made a series of revelations in recent weeks about the extent of Kiev’s suspected preparations to take Donbass by force, and efforts to build weapons of mass destruction on Ukrainian territory.

Ukrainian President Volodymyr Zelensky hinted in a speech at the Munich Security Council in February that Kiev may renounce its commitment not to build nuclear weapons. Earlier this month, a source familiar with the nuclear sector told Sputnik that the United States may have supplied Ukraine with plutonium suitable for nuclear weapons development and that recent clashes between Russian national guard units and Ukrainian saboteurs in administrative buildings adjacent to the Zaporizhia NPP may have been related to a nuclear weapons programme.

Last week, the Russian MoD published documents purporting to show Ukrainian preparations for an assault on the Donbass. Separately, the military released evidence on the extent of a Pentagon-backed biowarfare programme being operated in Ukraine. US officials and media initially dismissed these reports as Russian propaganda and disinformation, but US undersecretary of state Victoria Nuland confirmed that Ukraine is hosting what she dubbed “biological research facilities,” and said Washington was “quite concerned” that the “research materials” there could fall into Russian hands.

According to the Russian military, these biofacilities engaged in dangerous research akin to something out of a Tom Clancy novel, including experiments with bat, reptile and bird coronaviruses, and the means to spread deadly pathogens via wild migratory birds. Furthermore, the Ukraine-based labs reportedly sent serum samples of primarily “Slavic ethnicity” patients to a key Pentagon biolab in Maryland, for reasons as yet unclear.