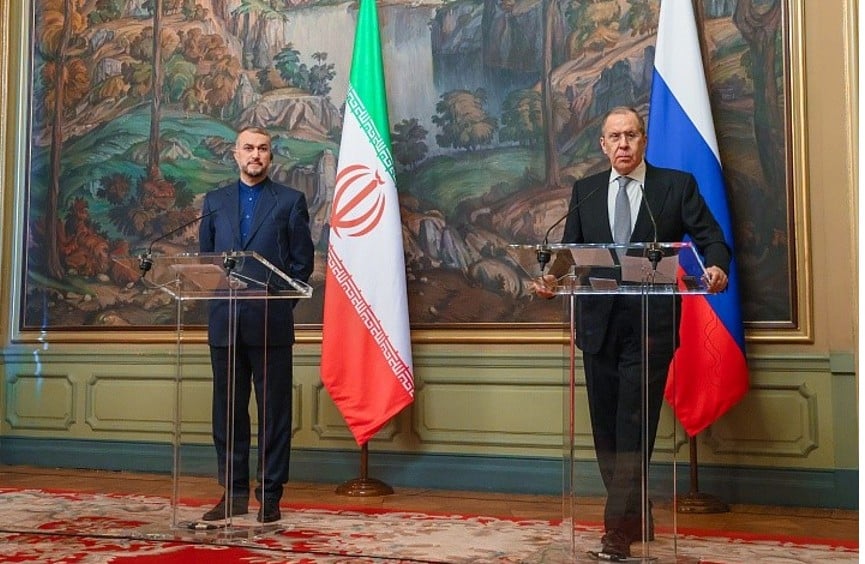 We have held talks with my colleague, Foreign Minister of the Islamic Republic of Iran Hossein Amir-Abdollahian. The talks were held in a traditionally friendly atmosphere and were frank, concrete and useful.

We discussed the further development of our broad and multifaceted bilateral cooperation in accordance with the agreements reached by President of Russia Vladimir Putin and President of Iran Ebrahim Raisi during his visit to Moscow on January 19-20, 2022. We are continuing to work on a new, big interstate treaty at Iran’s initiative. We expressed mutual interest in signing this basic document as soon as possible. It will reflect the current state and development prospects of the entire range of Russian-Iranian relations. We reaffirmed the principles of our interaction on the international stage.

We highlighted our trade and economic cooperation and noted the steady growth in our mutual trade despite the illegal sanctions and the pandemic. In 2021, it increased by nearly 82 per cent, to more than $4 billion. We agreed to continue working to build up our business ties and enhance their quality, including at the interregional level. We confirmed that no illegal sanctions would hinder our consistent progress.

We had a constructive discussion on current international matters. We have a common stand on the promotion by our Western partners, led by the United States, of the “rules-based order,” which they want to take the place of international law. This rules-based order is the epitome of injustice and double standards, alongside the afore-mentioned illegal unilateral sanctions, which are targeting ordinary people.

We spoke up firmly in favour of making international life more democratic, based on all countries’ strict compliance with the UN Charter and its principles, and on the strengthening of the UN’s central role in international affairs. We decided to continue strengthening our effective cooperation within the framework of the UN, where our positions are traditionally very similar or coincide.

We expressed support for the decision taken at the 21st SCO summit in Dushanbe in September 2021 to launch the procedure to grant the status of full member to Iran. Tehran plays a major role in Eurasia and has been working closely with the Shanghai Cooperation Organisation for a long time. This interaction will now be given a new, comprehensive quality.

We facilitate a negotiating process that was launched in November 2021 to conclude a full-scale free trade agreement between Iran and the Eurasian Economic Union. We are convinced that the liberalisation of customs tariffs will positively influence the development of Russian-Iranian trade and economic ties.

We held a detailed discussion on the current situation with the Joint Comprehensive Plan of Action regarding the Iranian nuclear programme. We support the soonest possible resumption of the full implementation of the agreement, which was formalised by UN Security Council Resolution 2231, based on a balance of interests initially stipulated by it. We are expecting the United States to return to the nuclear deal’s legal framework and to cancel the illegal US-imposed sanctions that have a painful effect on Iran, its people and a number of other countries.

We exchanged opinions on the military-political and humanitarian situation in Syria. We expressed our mutual striving to closely coordinate our actions to further attain lasting peace and improve the humanitarian situation in this country. We agreed to continue to work together for these purposes within the framework of the Astana format, which has proven effective and which includes our Turkish colleagues.

We coordinated our positions on other important regional matters, including the situations in the Caspian region, the South Caucasus, Afghanistan and Yemen.

We touched on the situation in Ukraine and around it. We thanked our Iranian colleagues for their objective and well-thought-out position and for understanding Russia’s security concerns, which were caused by the destabilising actions of the United States and its NATO allies. Once again, we noted that our actions are to protect the people of Donbass from the military threat posed by the Kiev regime and to facilitate the demilitarisation and denazification of Ukraine in full compliance with the values contained in the UN Charter and within the framework of documents, approved at the top-level.

I believe our talks were very productive. We have agreed to maintain contact on all issues under discussion.

Mr Minister has kindly invited me to pay a reciprocal visit to Tehran. We have accepted the invitation and will coordinate the dates soon.

I would like to use this opportunity to congratulate our Iranian friends and, in their person, all those celebrating the springtime Nowruz holiday in the approach to this bright event.

Question (translated from Farsi): They say Russia has demanded written guarantees from the United States at the talks in Vienna so that any sanctions against Moscow would not affect its relations with Tehran. Can this prevent agreements from being reached? Or will the American side’s illogical demands lead to this?

Sergey Lavrov: We have received written guarantees. They are actually included in the text of the agreement on the resumption of the Joint Comprehensive Plan of Action (JCPOA) on the Iranian nuclear programme. All projects and areas of activity envisaged by the JCPOA have been protected, including the direct involvement of our companies and specialists, including cooperation on the Bushehr Nuclear Power Plant, which is a flagship cooperation project, and in the context of all existing plans associated with it. The Americans try to accuse us of slowing the agreement process almost every day. This is a lie. Certain capitals have yet to approve the agreement, but Moscow is not one of them.

Question (translated from Farsi, addressed to Hossein Amir-Abdollahian): Yesterday you spoke on the phone with Minister of Foreign Affairs of Ukraine Dmitry Kuleba. He wanted to give you a message for Russian Foreign Minister Sergey Lavrov. How would you comment on this?

Sergey Lavrov (adds after Hossein Amir-Abdollahian): During our meeting, Hossein AmirAbdollahian spoke to me about the phone call he had with the Ukrainian Foreign Minister. He conveyed to me Dmitry Kuleba’s wish that we need to “stop the war” as soon as possible. This is exactly what we are doing – we are stopping the war that the Kiev regime has been waging against the population of Donbass for the past eight years or more. This war must stop. Especially now, when once again we can see the true face of the radical nationalists in Kiev. Yesterday, they used Tochka-U systems to fire cluster munitions at the centre of Donetsk killing 20 and injuring even more civilians. All these facts are being hushed up in the West, which continues to whip up hysteria by spreading patent fake news.

We have handed over some materials to our Iranian friends (we are distributing them to all our counterparts). They contain concrete facts to show what the current Ukrainian government is like, what approaches Ukrainian officials (starting with the president) express, and how they treat their obligations under the United Nations Charter, UN resolutions, the OSCE and the Minsk agreements. They signed the Package of Measures and then ignored it with the connivance (or even encouragement) of our Western colleagues.

The negotiations are ongoing on Ukraine’s neutral military status with security guarantees for all participants in this process; Ukraine’s demilitarisation to prevent any threat to the Russian Federation from its territory ever; and the termination of that country’s Nazification policy supported by a number of Ukrainian legal acts, including the abolition of all discriminatory restrictions imposed on the Russian language, education, culture and media in Ukraine.

Question: Russia has repeatedly said that there is no alternative to the JCPOA. There are some reports that the United States may suggest a new agreement without Russia’s participation. Does Moscow have any counter-proposals?

Sergey Lavrov: This is yet another attempt to lay the blame at the wrong door. We have never made any excessive demands. All our rights in cooperation with Iran on JCPOA projects are reliably protected. If the Americans have not yet made a final decision on resuming the JCPOA, they probably want to shift the blame for this on somebody else. Hossein Amir-Abdollahian said that at this point, the obstacles are being created by the US’s excessive demands.

Question: The nuclear deal could unfreeze Iran’s oil exports. Would this affect Russian oil exports? Is there any mechanism to smooth over such consequences in relations between Moscow and Tehran?

Sergey Lavrov: The nuclear deal is bound to unblock Iran’s oil exports. We enthusiastically supported this important part of the agreement.

As for the impact of Iranian oil on the world market, this will affect all exporting and importing countries. There are mechanisms to prevent volatile surprises. First, there is OPEC+, of which Iran is a member. When new amounts of hydrocarbons appear in the world market, it drafts an agreement on an optimal distribution quota. I am sure that constructive work lies ahead as soon as all issues linked with Iran’s oil on the world market are settled.

Question: Having cited considerable evidence, Russia raised the issue of bio-laboratories in Ukraine. Is the international community interested in this issue? Is it ready to talk about this? Will Moscow return to this issue?

Sergey Lavrov: I would not describe the reaction of the international community as “interest.” The reaction is sooner a negative surprise and wariness. The revealed facts point to the enormous scale of the US’s unlawful activities on spreading its military bio-laboratories all over the world. There are hundreds of them, including almost 30 in Ukraine. Many of them have been established in other former Soviet states right along the perimeter of the borders of Russia, China and other countries.

We will demand that this issue be reviewed in the context of the commitments assumed by all participants in the Convention on the Prohibition of the Development, Production and Stockpiling of Bacteriological (Biological) and Toxin Weapons and on their Destruction. We will do all we can to force the Americans to stop blocking our proposal from 20 years ago on the need to create a special mechanism for verifying any alarming reports on the appearance of substances that may be used to develop biological weapons. They are against this mechanism because it would make any bioactivity transparent. They do not want transparency because they find it more expedient to do everything under their own control, as they have been doing up until now.

I am convinced that the international community has realised (and will realise again) that such activities are unacceptable and fraught with lethal threats to civilians on a massive scale.