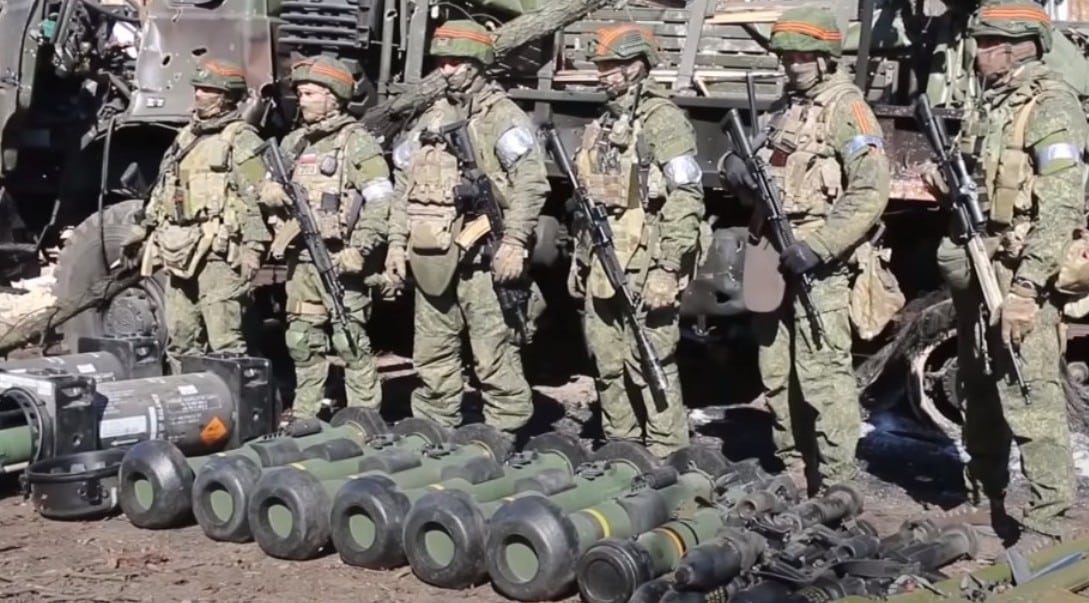 Southfront: By the evening of March 15 (local Ukrainian time), it has appeared that the Russian Armed Forces and its allies from the Donetsk and Lugansk People’s Republic once again took an operational pause in their offensive in the northern and eastern sectors of Ukraine. The main military actions are taking part around Mariupol, east of Donetsk, and in the area of the Lysichansk-Severodonetsk agglomeration in the region of Donbass.

Units of the Russian Armed Force and the DRP have been developing the operation to eliminate the vestiges of Kyiv’s forces inside Mariupol. Heavy clashes are ongoing there.

Forces of the Kyiv government in the Lysichansk-Severodonetsk agglomeration are almost surrounded. However, LPR and Russian forces have still not been able to close the circle.

Intense artillery and airstrikes on positions of the Ukrainian Armed Forces near Avidivka, east of Donetsk, continue. Nonetheless, no offensive has been launched there.

It should be noted that the town of Izum in the south of Kharkiv Region is still contested between Russian forces and units loyal to Kyiv. The situation in Kharkiv city itself remains tense, but Russian forces are not storming it.

Evacuation of civilians from Mariupol:

It is useful to point out that the Russian military is still not very active in its coverage of the military operation. The small number of photos and videos released by the Russian side and the full-scale pro-Kyiv propaganda campaign in mainstream media create a distorted picture of the developments in Ukraine. In this imaginary world, Kyiv’s forces already delivered a devastating blow to the advancing Russian forces and are about to push to capture Moscow. The recent intensification of Russian coverage of the operation is a positive trend. However, much more effort will be needed to fight back the joint propaganda advance of the so-called ‘Western states’.

Media sources link another pause in the Russian advance in Ukraine with the new round of negotiations between Kyiv and Moscow. Despite recent demonstrations of the destructive posture of the Ukrainian leadership, it seems that Russia still hopes to avoid additional civilian casualties and at least secure the evacuation of civilians via humanitarian corridors. Kyiv, in its own turn, continues to sabotage even this humanitarian effort.

On March 15, the Russian Defense Ministry published a statement of Head of the National Centre for Defence Control of the Russian Federation Colonel-General Mikhail Mizintsev regarding this situation. It provides a closer look at what is really happening in the humanitarian aspect of the conflict (source):

Since yesterday, the Russian Federation has been conducting an unprecedented humanitarian operation in Mariupol. At the same time, the civilians rescued yesterday and today confirm all the previously made assumptions about the nightmare and horrors that took place in this city.

The Ukrainian nationalists mined all the approaches to the city, blew up bridges, residential quarters of Mariupol, kindergartens and schools, medical institutions, and other civilian infrastructure facilities were turned into strong points, ammunition depots, firing points, and Mariupol residents themselves were used as a human shield. At the same time, under the threat of death, all able-bodied residents were driven to the equipment of barricades, trenches, and other engineering structures.

The inhumanity and ruthlessness of the agonizing Ukrainian neo-Nazis towards their own civilian population are fully confirmed by the so-called “Festung” concept they borrowed from the fascists – “fortress cities”. The special tragedy of such tactics lies in the fact that the Nazis created all conditions for the mass destruction of civilians in order not to leave a single living witness to their monstrous crimes.

In addition, nationalist battalions and units of the Armed Forces of Ukraine have disabled life support systems, housing, the social and administrative infrastructure of the city, individual buildings and structures have actually been wiped off the face of the earth, shops have been looted, monuments and objects of historical heritage have been desecrated and cannot be restored.

All our previous appeals with persistent and diplomatic appeals to the Kiev authorities to allow the civilian population to go to safe areas were completely ignored.

Despite the complete unwillingness of official Kiev to protect the civilian population from terrorist attacks by crazed nationalists, as well as the complexity of the situation, aggravated by the actions of disparate armed gangs, the Russian Federation continues to fully fulfill its humanitarian obligations.

More than 450 tons of food, medicines and basic necessities have already been delivered to the civilians of Mariupol to provide humanitarian assistance, including 225 tons today. Mariupol residents are being evacuated safely through open humanitarian corridors from the unblocked city.

Of the ten routes we have proposed, the Ukrainian authorities have agreed on only three, but at the same time, not a single humanitarian corridor to the Russian Federation has been confirmed by official Kiev again, which once again proves the indifference of the current government to its own people.

Based on humanitarian principles and solely for the purpose of ensuring the safety of civilians forcibly held by nationalists in blockaded settlements, we coordinate all additional humanitarian corridors proposed by Kiev on a daily basis. Today, the Ukrainian side announced nine routes for the withdrawal of refugees in the Zaporozhye, Zhytomyr, and Poltava directions. On all these routes, the Russian Armed Forces also strictly observe the ceasefire.

We continue to closely monitor the actions of the Ukrainian side both on the ground and from the air, including with the use of unmanned aerial vehicles.

Once again, it was recorded that the Ukrainian side uses the ceasefire regimes to actively move weapons and military equipment, restore the combat capability of equipment, replenish material reserves. At the same time, the wishes of civilians to evacuate to safe areas in the northern and eastern directions to the territory of Russia are simply ignored, and all attempts to do this are blocked by territorial defense detachments and units of the Armed Forces of Ukraine.

Exclusively for humane purposes, Russian servicemen not only do not hinder but also urge Ukrainians to use any convenient ways for them to get to safe places, including those routes that pass through the territories controlled by Kiev.

The Kiev authorities, on the contrary, continue to force people to stay in their homes and allow evacuation only to the western regions of Ukraine or neighboring European countries, deliberately not notifying the civilian population about the possibility of evacuation to the Russian Federation.

Western countries, as well as international organizations such as the United Nations, the OSCE, the International Committee of the Red Cross, and other human rights organizations, continue to hush up the horrific facts of missile and artillery strikes on densely populated areas of Donetsk. They don’t know the current situation, so they distract relevant departments of the Russian Federation by various and multiple requests to ensure the safe evacuation of civilians from territories controlled by the Armed Forces of Ukraine, and not by the Russian Armed Forces.

In the conditions of the growing humanitarian crisis, a significant part of the population forcibly held by radicals in Ukrainian cities and used by them as a “human shield” is looking for the possibility of evacuation only to Russia, without considering options for exit to Western states, as evidenced by the next multimillion appeals of citizens to the Russian side.

According to the results of daily monitoring, it was found that 11,412 more such requests were received only over the past day, and there are already 2,678,069 of them in our database with specific surnames and addresses from almost 2,000 settlements of Ukraine.

And this is not just statistics, these are the fates of ordinary people, their hopes for an early end to the daily nightmare, despair at the hopelessness of the situation and the uselessness of their country, whose authorities have legitimized crimes against humanity with their criminal decisions, ignore numerous cases of looting, robbery, banditry, sanctioned the use of weapons by nationalists against the civilian population, including women and children.

I quote another one of the thousands of appeals received today:

Despite this, 11,372 people, including 1,873 children, were evacuated from the dangerous zones of various regions of Ukraine, as well as the Lugansk and Donetsk people’s republics, during the day without the participation of the Ukrainian side, and 258,791 people have been evacuated since the beginning of the special military operation, 56,180 of them children. The state border of the Russian Federation was crossed by 29,291 personal vehicles including 1,368 per day.

Over the past day, thanks to the security measures taken by the Russian Armed Forces, it was possible to provide humanitarian corridors and evacuate 36,721 citizens traveling by buses and personal cars from various settlements to the western regions of Ukraine in Zhytomir, Lugansk, Donetsk and Mariupol directions.

7,070 citizens from 22 foreign countries, as well as the crews of more than 70 foreign vessels blocked in the seaports of Ukraine, continue to be held hostage by the militants of the territorial defense battalions.

The fate of these foreign citizens has been the subject of round-the-clock cooperation with representatives of the relevant diplomatic agencies. At the same time, the Ukrainian authorities still do not respond to the appeals of foreign states for the rescue of compatriots in distress.

More than 9,500 temporary accommodation centers continue to operate in the regions of the Russian Federation.

More than 18,500 tons of basic necessities, food, and medicines have been prepared at the collection points.

At the same time, the Russian side is creating the necessary conditions for a peaceful and safe life in all the liberated territories, ensuring unimpeded access of the population to any humanitarian aid.

2,709 tons of humanitarian cargo have already been delivered to the settlements of Kiev, Sumy, Chernigov, Zaporozhye, Kharkov, Kherson regions, as well as Lugansk and Donetsk people’s republics during the 334 humanitarian actions, including 28 actions carried out over the past day, 544 tons of basic necessities and food were transferred to the civilian population of the liberated areas.

To date, 15 humanitarian actions have been planned and are currently being carried out in Chernigov, Donetsk People’s Republic and Mariupol during which 510 tons of basic necessities, medicine and food are distributed.

A Russian strike on a military target in Odessa Region:

Hint.
If you are confused about which side to support in a war, always look for this man & and support the opposite side he is supporting.

Bernard Henri Levy, has been glimpsed in Odessa with Nazis of Ukraine. Irony dies here….a Zionist & Nazis together. pic.twitter.com/wrpfBhJH0T

It is hard to expect reasonable actions from the government that sabotages even the evacuation of civilians from the combat zone. In the previous years, the Ukrainian leadership already demonstrated the real value of dealing with it. So, now the main question of the negotiations is the Russian ability to eliminate Kyiv’s ability to destabilize the region and further by force.