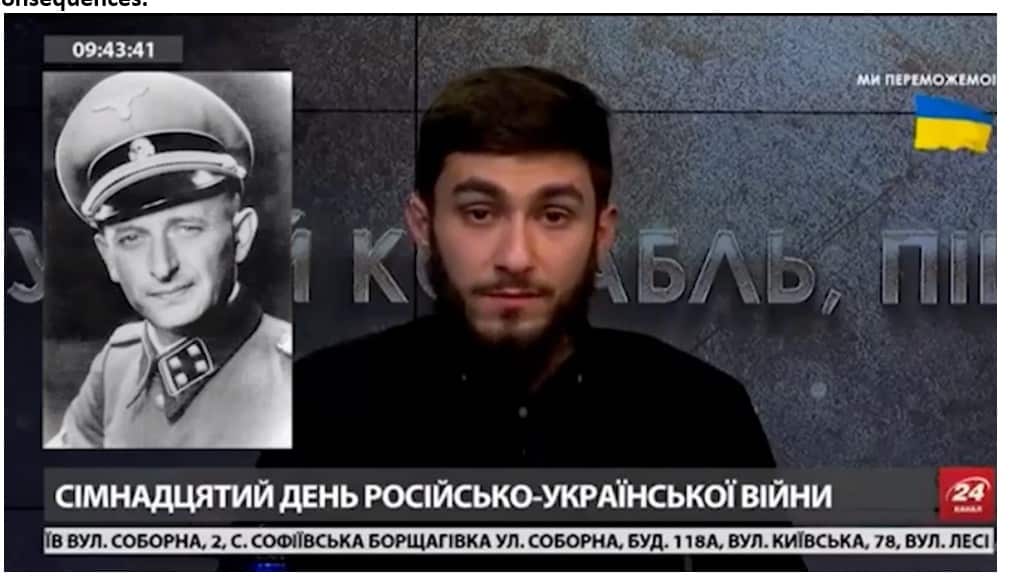 During a live broadcast, a Ukrainian presenter quoted Adolf Eichmann and called for killing Russians, especially Russian children. This, like many other incidents in the past, had no consequences.

Anywhere else, this would have caused a wave of public outrage; in Ukraine, it was not worth reporting to anyone. On the morning of March 13, 2022, the national television channel 24 live flashed a photo of Adolf Eichmann, but not for educational purposes. The speaker, Fahrudin Sharafmal, launches into a tirade of hatred that is sharp even by Ukrainian standards. He is aware that he is not allowed to do this as a journalist, he says. But he finds it difficult to restrain himself, and therefore:

“If they already call us Nazis and fascists in Russia, then I take the liberty of quoting Adolf Eichmann. He said that in order to destroy a nation, you have to kill the children. Because if you kill only the adults, the children grow up and take revenge. If you kill the children, they will never grow up, and the nation will perish.”

The Ukrainian army, continues Sharafmal, is not allowed to kill the children, “Conventions, Geneva and so on” forbid this. However, he considers himself to be in the right:

“But I am not a soldier. And if I have the opportunity to take revenge on the Russians, I will do it, and I will do it in accordance with the Eichmann Doctrine. I will do everything so that neither you nor your children will ever live on this earth.”

He said he did not care who had started and wanted this war, whether it affected the guilty or the uninvolved:

“We did not want this war either. But now, you must understand, it is about the victory of the Ukrainian people, not about peace. We need a victory, and if it means slaughtering all your families, I will be one of the first to do it. Glory to the nation! And hopefully, there will never be such a nation as Russians on this planet again. Russians are filth that litter the planet. And if Ukrainians have the opportunity – and they are already doing so – to shoot, stab, strangle Russians, I hope everyone will do their part and kill at least one Russian.”

So much for the incendiary speech of Fahrudin Sharafmal, broadcast to all parts of Ukraine. An emotional slip?

No one intervenes during this tirade, even though a co-host was sitting next to him a moment ago. No one interrupts the live broadcast. What’s more, someone in the control room must have inserted the Eichmann photo. In any case, the sympathy for Eichmann’s methods is one thing not: the thinking of an individual.

The incident has no consequences. At any rate, as of Tuesday evening, a Google search yields no reaction whatsoever. Neither in Ukrainian nor in Russian. Two days later, Sharafmal apologizes. Briefly and with a smile. And immediately makes an exception: His denial does not apply to the Russians on Ukrainian soil.

Otto Adolf Eichmann was an SS-Obersturmbannführer and headed the office that organized and carried out the persecution, expulsion, and deportation of the Jews. The last one was the deportation to the death camps. After 1945 he managed to escape to Argentina.

He thus escaped the Nuremberg war crimes trial, but justice befell him as well. In May 1960, he was kidnapped from Argentina by Israeli agents and brought to Israel, where he was publicly tried. He was sentenced to death and executed by hanging on the night of May 31-June 1, 1962.

Sharafmal, on the other hand, does not even face a fine for sedition in post-Maidan Ukraine.

SOURCERTDE.site
ATTENTION READERS
Due to the nature of independent content, VT cannot guarantee content validity.
We ask you to Read Our Content Policy so a clear comprehension of VT's independent non-censored media is understood and given its proper place in the world of news, opinion and media.