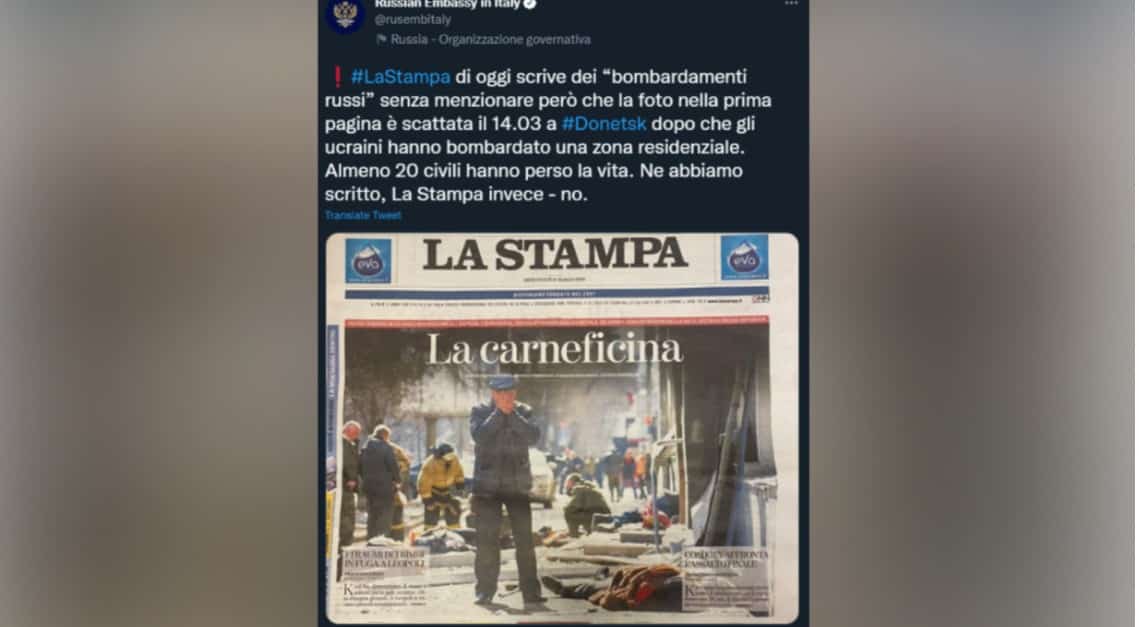 The Italian newspaper La Stampa said on Thursday it didn’t do anything wrong when it printed a frontpage image showing the aftermath of a ballistic missile strike on Donetsk, the capital of a breakaway republic in eastern Ukraine, while promising readers coverage of Russian attacks in Kiev and Lvov.

The photo was meant to demonstrate the “clear horror of the war” and not to assign blame to any particular party, editor-in-chief Massimo Giannini said in an interview with La7 TV channel, responding to criticism of his editorial choices. He said his newspaper didn’t try to mislead readers, despite what detractors said.

“The thing that bothers me most and pains me a lot is that there are also some people here in Italy, some disgraced people of the web, who amplify this and call it a case of disinformation. Where is the disinformation?” he demanded.

The Wednesday print issue of the paper featured a full-page photo of a street littered with dead bodies, with a man covering his face in grief. “The Carnage,” the headline read. Short text teasers promised stories further in the paper about the “traumatized children in Lvov” and “Kiev preparing for the final assault” by Russian troops. 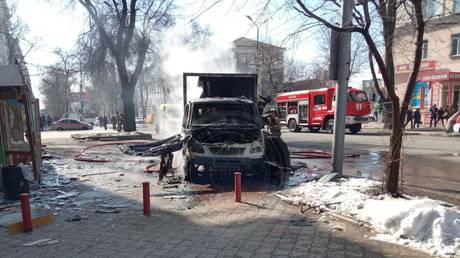 The photo was taken on Monday in Donetsk, the capital of the breakaway Donetsk People’s Republic after its center was struck by a tactical Tochka-U ballistic missile. Its leadership and Russia said Ukraine was the only party that could have launched it and that the rocket’s warhead was a cluster weapon, designed to kill unprotected soldiers in a wide area.

The attack on Donetsk killed 21 civilians and injured scores of others. Moscow called it a terrorist attack and a war crime. The Russian embassy in Italy, as it responded to La Stampa’s frontpage, said the newspaper didn’t bother to cover it.

Russia’s foreign ministry spokeswoman, Maria Zakharova, said on Thursday that the Italian news outlet, like other Western mainstream media, was intentionally “distorting the perceptions of its own readers.”

The missile attack proved once again how strong the influence of radical nationalists and neo-Nazis was on Ukrainian armed forces, the Russian official said. NATO members allowed those forces to entrench themselves in the country “while the media kept silent,” she pointed out. La Stampa’s use of the photo stands out among examples of fake news and is “a real crime,” she asserted.

Lvov, a city in western Ukraine, has become a major destination for refugees fleeing the fighting in other parts of the country. The capital, Kiev, is partially encircled by Russian troops and has been damaged to some extent amid the fighting. The Ukrainian side claims Russia is deliberately attacking civilians in Kiev to terrorize them. Moscow denies that and blames civilian casualties on Ukrainian troops, who allegedly deploy their artillery and anti-aircraft weapon systems near civilian facilities, which get hit by return fire.