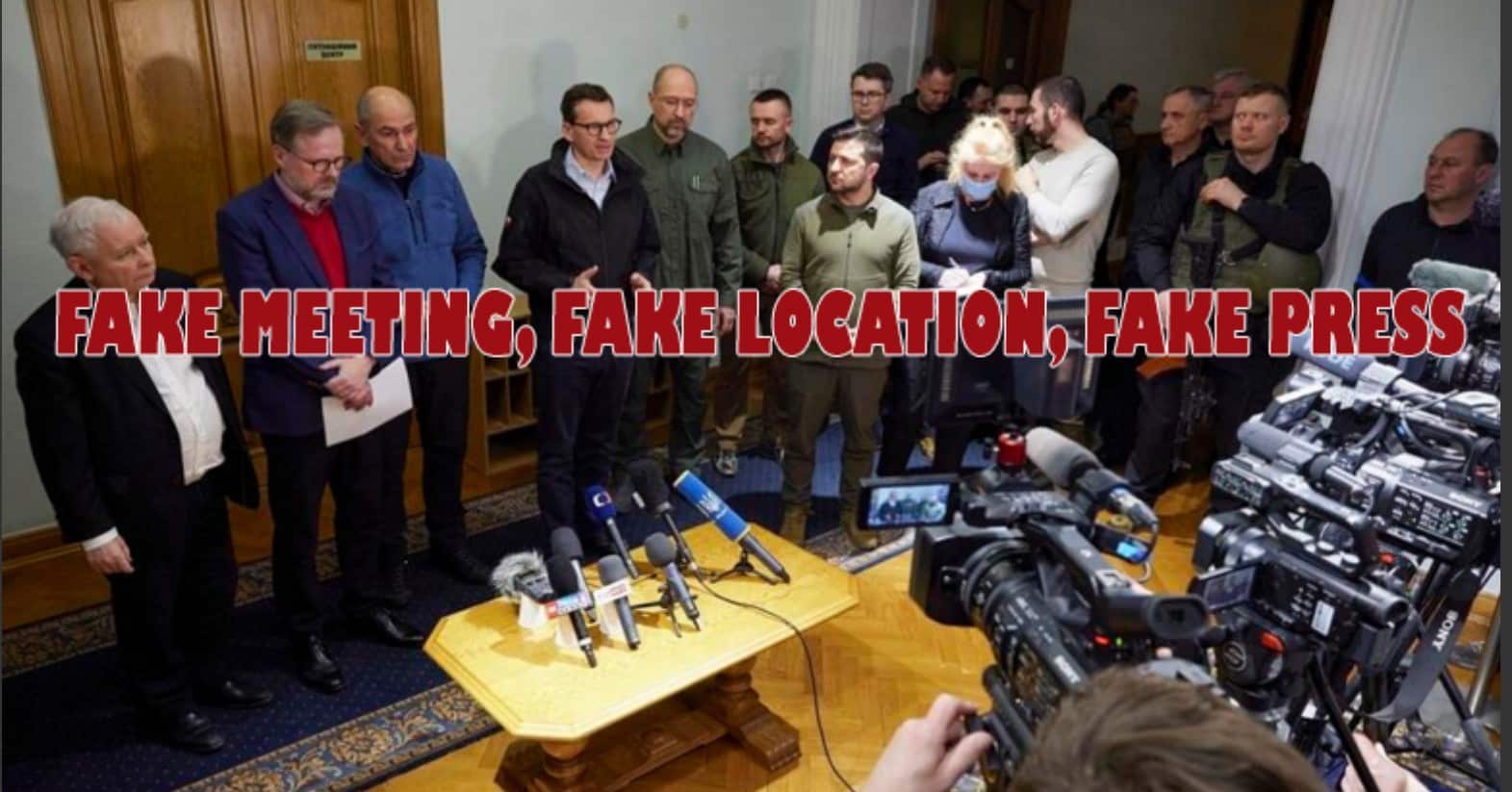 johnhelmer.org – The summit meeting of East European leaders, hosted in Kiev by Ukrainian President Vladimir Zelensky on March 15 was fabricated by the Polish government, with Polish secret service agents playing the part of journalists, and fake photographs of the meeting, press briefing, and train journey prepared by Zelensky’s press office.

The operation was designed by the Poles to promote their role in support of Ukraine, the Ukrainian refugees, and in defence of Europe against Russia, and seek new European, American,  and NATO alliance funds and military equipment.

According to the Ukrainian publicity, the operation was designed to promote the appearance that Zelensky’s regime is in control of Kiev, and to accelerate their application for admission to the European Union (EU).

The Anglo-American media have reported the meeting, as announced by Petr Fiala, the Czech  prime minister, with “the aim…to express the European Union’s unequivocal support for Ukraine and its freedom and independence,”

The result of the summit meeting, according to the Financial Times in London, was “a show of European solidarity even as Russian shelling continued on residential neighbourhoods in the Ukrainian capital. The trip by the prime ministers of Poland, the Czech Republic and Slovenia is the most high-profile visit to Kyiv since Russia invaded the country on February 24.”

“It is here, in war-torn Kyiv, that history is being made,” the Polish prime minister Mateusz Morawiecki announced. “It is here that freedom fights against the world of tyranny. It is here that the future of us all hangs in the balance.”

Morawiecki and the western press were lying – there was no meeting in Kiev. Instead, the meeting was staged at the Polish rail junction town of Przemysl, 95 kilometres west of Lvov (Lviv), and 20 km inside the Polish frontier with Ukraine.

In a report published by the Associated Press (AP) bureau in Warsaw, “the long journey overland from Poland to Kyiv by Morawiecki, Poland’s deputy Prime Minister Jaroslaw Kaczynski and Prime Ministers Petr Fiala of the Czech Republic and Janez Jansa of Slovenia sent the message that most of Ukraine still remains in Ukrainian hands.”

The evidence gathered from sources in Warsaw and from analysis of the videos and photographs published on the meeting proves there was no “long journey”; no meeting in Kiev or in Lvov, the Galician region capital, which is the operating headquarters of the Ukrainian government. From the evidence provided by the Poles and also by Zelensky’s publicity staff, it is now clear that only a small part of western Ukraine remains in Ukrainian hands.  Zelensky himself is now in Polish hands.

The Warsaw sources say the idea for the summit meeting was initiated by Polish Deputy Prime Minister Jaroslaw Kaczynski. Since the death of his twin brother in an aircraft crash at Smolensk, Russia, in 2010, Kaczynski has been one of the most influential politicians in Poland; he is in charge of the defence, security, interior and justice ministries.  He is fiercely anti-Russian.

The Polish sources believe there was no possibility that Kaczynski, Prime Minister Morawiecki, or the Czech and Slovenian delegations would have applied to Moscow for safe conduct to Kiev; nor would they have risked their own security by running the gauntlet of Russian electronic and air surveillance and missile attack on a two-hour train journey from Przymysl to Lvov, or on the seven-hour journey to Kiev.

Instead, the Czech and Slovenian officials flew into Rzeszow Jasionka,  the nearest airport to Przemysl; the airfield is also a NATO logistics and security base. They then drove to Przemysl. There the Ukrainians had despatched one of the luxury versions of the regular train service between Przemysl, Lvov, and Kiev. This had been fitted up for fabricated photographs of the Polish, Czech and Slovenian officials meeting as they purportedly travelled towards Zelensky in Kiev.  The press which has published these pictures knows them to have been faked and has assisted in concealing the real location.

PRESS CONFERENCE OUTSIDE THE MEETING ROOM

The Associated Press (AP) – a US-owned corporation based in New York  — has provided the most detailed bulletin on the meeting, its participants,  and what they discussed. The agency byline reveals that its reporters filed their story from Warsaw; they were not present at the events they claim to have verified. The only direct source for the AP report was reported to be a Polish official who was reported as saying:  “The visit had been planned for several days but was kept secret for security reasons, said Michal Dworaczyk, chief of staff for Morawiecki”.

In the fine print under AP’s publication of photographs of the meeting, the agency issued a source disclaimer. The images came from “video provided by the Ukrainian Presidential Press Office”, AP said.

SOURCEJohnHelmer.org
ATTENTION READERS
Due to the nature of independent content, VT cannot guarantee content validity.
We ask you to Read Our Content Policy so a clear comprehension of VT's independent non-censored media is understood and given its proper place in the world of news, opinion and media.