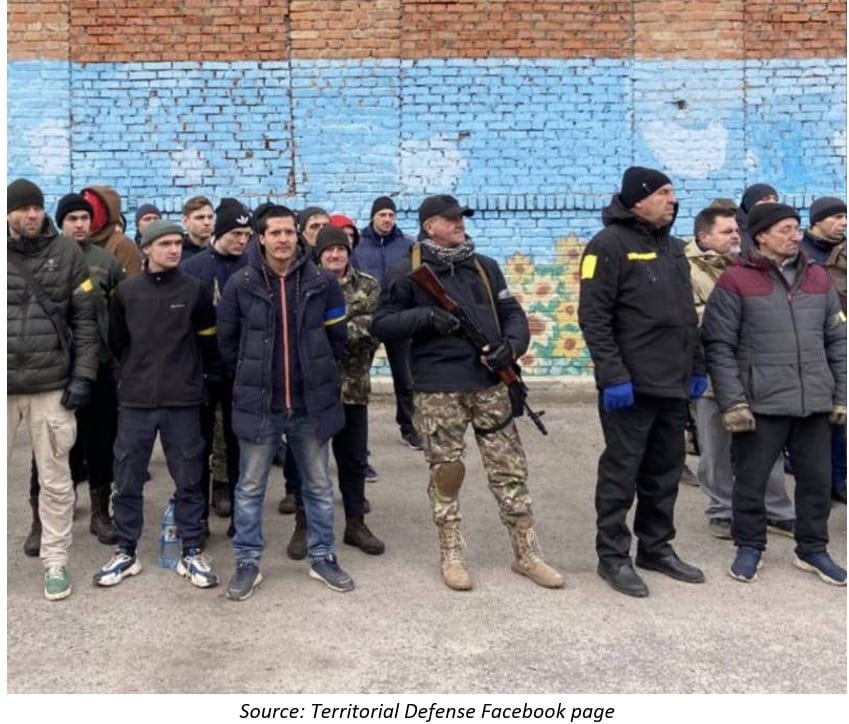 Perhaps it is worth starting with the so-called “defenders of the city”, who, according to the plan of the Kiev regime, will defend Kyiv at the cost of their lives. As it was said in one of my previous materials, during the trip to several districts of Kyiv, I did not find any regular troops. Exclusively representatives of the so-called “territorial defense”.

Among these characters, you can see both those who dressed inexpensive equipment of NATO troops and those who maneuver between the barricades in civilian clothes. Most often – tracksuits “a la the 90s”. Among the latter, a particularly strong impression was made by a young dude with a Makarov tucked into the colored belt of fashionable jeans.

This indicates that the “territorial defense” lacks not only elementary equipment (including pistol holsters) but also people who, at least at the very initial level, could instruct such “cowboys” about the rules for handling weapons. However, the fact that such carrying of a pistol will most likely lead its owner to an injury incompatible with further procreation, in general, says a lot.

The armament of the “terodefenders”, whom the locals have already dubbed the Makhnovists, also deserves some attention. It, like its current owners, is rather motley. In the hands of the “defenders of the city” one can see both army machine guns, mostly, however, old models (such as “paddle”), hunting rifles, and a wide variety of military antiques. I can confirm that the photographs of “terodefenders” armed with DP-27 machine guns that have recently appeared on social networks are by no means fake.

Personally, with my own eyes, at one of the checkpoints, I had a chance to see a “fighter” flaunting a submachine gun, vaguely resembling a PPS, but still not being one. Even with certain knowledge in the field of small arms, I was unable to identify this rarity. Undoubtedly, something is either very rare, very ancient, or even some kind of homemade product.

In a word, the armament of the “terodefense” suggests that after the thoughtless and irresponsible first distributions of “trunks”, the vast majority of which ended up in the hands of bandit and marauding groups, they decided to scrape the corresponding warehouses under a whisk, using absolutely everything that was there It was. How this “inconsistency” can be provided at least with ammunition is completely incomprehensible.

This alone gives reason to assume that no one initially considers “terodefense” as a real combat force capable of waging a long-term confrontation with the enemy, having prepared for it the role of either an armed “extras” or cannon fodder.

In most cases, when observing the behavior of these characters, one gets the feeling that they have not fully realized what is happening, and are simply playing, pardon the expression, “war games”. Finally, for the most part, worthless, outstanding, and failed individuals are endowed not only with weapons but also with the right to use them with impunity. It is difficult enough to contain emotions, watching how these so-called “defenders” and “the last stronghold of the city” smugly bully ordinary passers-by and gut the trunks of cars supposedly stopped for inspection with pleasure.

As I already mentioned, there are no regular military units on the streets of the city. Law enforcement officers, that is, the police, are also quite a rare phenomenon. However, according to the driver, thanks to whom I was able to arrange such a specific “sightseeing tour”, a huge concentration of troops and police is observed in the government quarter of Kyiv. It is obvious that all the available units of law enforcement agencies are concentrated in the city center to protect the invaluable person of Zelensky (who may no longer be there), the government, and the people’s deputies of Ukraine.

The trip “pleased” with another interesting moment. It was possible to observe the passage of Ukrainian armored vehicles in the amount of five units. I note that the surroundings almost corresponded to Hollywood blockbusters like Mad Max. First of all, passing through the streets of the city Tanks, apparently, for a long time standing without movement and maintenance, were shrouded in eerie clubs of “solar” smoke.

Presumably, the technical condition of these combat “horses” will allow them to stay on the move for the shortest possible time. On the technical side, everything is clear. Sincere bewilderment and confusion were caused by another extremely interesting detail.

Namely, the fact that absolutely all sides of the “armor” were hung with … car tires! It is quite possible that this is another know-how of the Ukrainian Armed Forces, using them as a replacement for dynamic protection. It sounds ridiculous, but believe me, insanity, which, on a pure eye, are given out as “effective measures of protection” or “containment of the enemy” in the city is becoming more and more every day.

The armored vehicles did not stay in the city but proceeded in a direction that suggests that they left for Brovary, where fighting is now taking place. In addition to tanks, another vehicle seen at one of the checkpoints was two reconnaissance lightly armored vehicles armed with heavy machine guns. And it was the only stationary “armor” for several areas, standing on the defense of the city. Everything else is “barricades” from a wild heap of anything and small groups of “therodefenders”.

Let me remind you that we are talking about areas that are one of the most dangerous directions for the Armed Forces of Ukraine when Russian troops enter from Bucha and Gostomel. According to logic and common sense, at least some kind of army defense should be organized there, but, in fact, there is none. To my great regret, I note that during this trip, the sounds of artillery were repeatedly heard from the sleeping quarters of the city.

Most likely a large caliber barrel, which hit from a dense residential area.

This confirms all the statements that the Kyiv regime and the Armed Forces of Ukraine are placing strike weapons in residential areas, and this is being done, including in Kyiv. People are indeed used as a human shield, and the population of the capital is no exception in this matter.

Judging by what I saw, I would venture to suggest that the Kiev regime does not have as many serious resources for the defense of the city as the General Staff claims. Everything that exists is concentrated in the government quarter and at separate points on the city’s borders. The rhetoric that Kyiv “will not be surrendered” sounds dubious. Especially against the background of the fact that they also talked about Kherson, Volnovakha, Kupyansk, Energodar, and other cities.

SOURCEEn.Topwar.ru
ATTENTION READERS
Due to the nature of independent content, VT cannot guarantee content validity.
We ask you to Read Our Content Policy so a clear comprehension of VT's independent non-censored media is understood and given its proper place in the world of news, opinion and media.