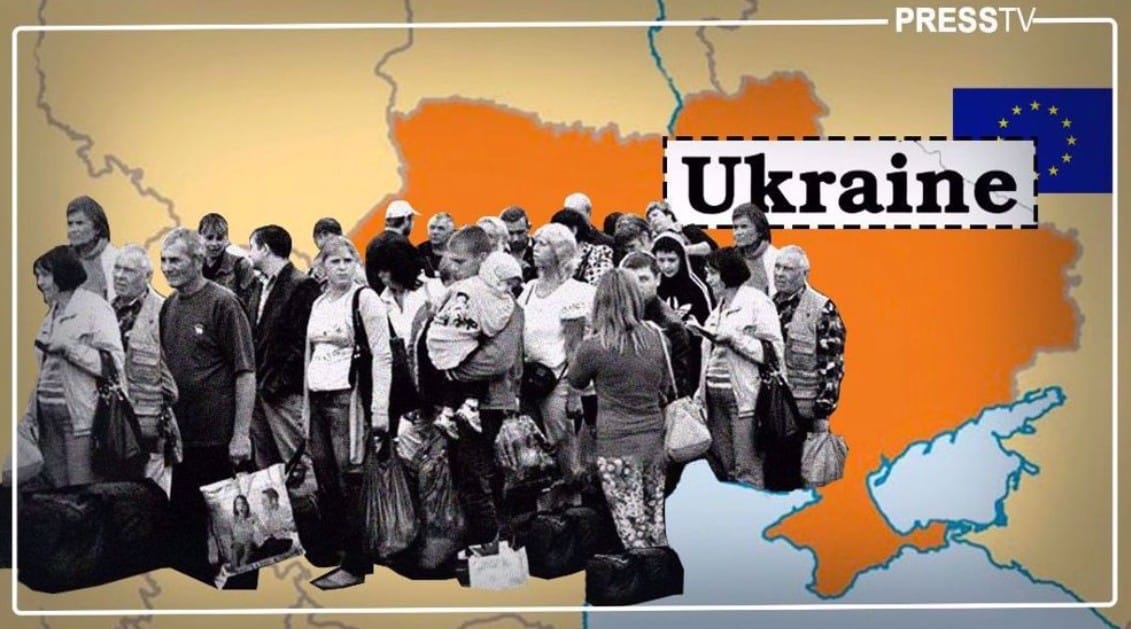 Press TV is an Iranian state-owned news and documentary network that broadcasts in the English and French languages owned by Islamic Republic of Iran Broadcasting, the only organization legally able to transmit radio and TV broadcasts in Iran.

PressTV – Since February 24, when Russia launched the invasion of Ukraine after provocations by the North Atlantic Treaty Organization (NATO), the number of displaced people and refugees – who have chosen European countries to escape from the crisis – has been increasing day by day.

According to a report by United Nations High Commissioner for Refugees Filippo Grandi issued earlier this month, over 1.5 million Ukrainians have fled the country. Grandi described the exodus of this number of war victims as “the fastest-growing crisis in Europe since the Second World War.”

If the crisis continues and the war becomes erosive, the number of refugees leaving the European country of 44 million people is expected to rise to more than 10 million. Of course, some states will be more affected by the flood of refugees due to their geographical proximity to Ukraine. Two weeks into the war, half of the refugees arrived in Poland, followed by Slovakia, Hungary, Romania, and Moldova.

This wave will gradually reach Western European countries, but the United States, as the main sponsor of creating and intensifying the crises in Asia and the Middle East, is immune from the flood of refugees and its harmful consequences, due to its distance from the conflict zone. As a result, the burden of responsibility will fall on the leaders of Brussels.

The Europeans, as longtime allies of the United States who have played a significant role in the Ukraine crisis through their actions and stances, now find themselves facing a large population of Ukrainians. They have to give shelter to the displaced Ukrainians despite domestic economic problems and the coronavirus pandemic.

Previously, the European Union agreed to grant temporary residence permits to Ukrainian refugees for up to three years. To implement its plan, the EU for the first time activated one of its mechanisms to allow Ukrainian citizens and their families to reside, work, study and enjoy social welfare within the 27-nation bloc.

This immigration policy adopted in the wake of the Ukraine crisis reflects the EU’s double standards in dealing with the displaced and refugees. Even European bodies, which are monitoring the situation of refugees in European countries, are accused of treating quite differently the refugees from Ukraine’s war-torn areas and those displaced by the wars in Syria, Iraq, and Afghanistan.

Additionally, the Ukrainian army and government systematically discriminate against those displaced by the war. The African Union, for example, said the Africans on the Ukrainian border are treated in a manner “shockingly racist and in violation of international law.”

On the eve of the third millennium, the West with its 2001 and 2003 attacks plunged Afghanistan and Iraq as well as the entire region into poverty and insecurity. However, it has through various means evaded responsibility for accepting refugees from these countries.

In the course of the latest developments in Afghanistan and the rise of the Taliban to power in the crisis-stricken country, which were largely caused by the West, the United States and Europe resisted international pressure to open their borders to the displaced and war victims. As the main sponsor of this deplorable situation, the United States received only 30,000 Afghan migrants. Canada also accepted just 20,000 refugees.

The EU member states are facing economic challenges, especially security-identity ones, and have rifts in this regard. Some of them refused to accept refugees despite pressure from EU leaders. Moreover, the share of major EU powers such as Germany, which are considered leaders, did not exceed 10,000 refugees.

Consequences of the refugee crisis for heterogeneous union

The European countries have always been referred to as migrant-hosting as opposed to those called migrant-first. This is also true at the time of crisis, when the displaced and refugees from across the globe target the green continent. Such waves deepen the internal challenges of this unbalanced union and ultimately threaten the dream of European convergence and its subsequent security architecture.

Contemporary views in Europe have shifted on the issue of immigration and refugees, viewing it as a “security” issue that is a major “threat.” It is widely believed that migrants, the displaced and refugees jeopardize social cohesion, employment opportunities, welfare systems, religious and cultural integration, democratic values, etc., and thus they are regarded as an obstacle to the stability of the host countries. This creates an atmosphere of skepticism towards migrants and foreigners.

In such an atmosphere, Europe has been repeatedly attacked by terrorists, and the ground has been laid for the emergence and rise of far-right parties in the continent. The extremist, anti-immigrant, racist, and militant groups seek to link all crises to refugees and increase their own political popularity as well as supporters by means of intimidation against the dire consequences of hosting migrants.

According to some opinion polls, far-right groups have been welcomed by the people in recent years, something that has resulted in their growing share in the parliaments and governments of various EU countries. It is mainly due to two factors: first, the high number of migrants and refugees, and second, the deteriorating economic and welfare conditions of European citizens caused by the financial crises and the coronavirus outbreak.

Alarm bells are ringing on growing extremism and the dire consequences of the rise of extremist outfits in Europe. In January, EU Counter-Terrorism Coordinator Ilkka Salmi warned against the escalation of violent right-wing extremism in the continent. Salmi named as European terror threats the aforesaid phenomenon along with the tendency of some citizens to active extremist groups as well as cyber terrorism. This situation will undoubtedly worsen if millions of Ukrainian refugees enter the European Union.

This article was written originally in Persian and translated to English by Press TV staff. The views expressed in this piece do not necessarily reflect those of Press TV.