Watch the full uncensored FFWN above, click HERE for links to stories we covered. Read the transcript of first 8 minutes below.

Kevin Barrett: Welcome to False Flag Weekly news, the weekly news show that counters the propaganda—and there’s plenty of it to counter! I can’t even count the countless propaganda items I’m supposed to be countering. So here I am with Dr. E. Michael Jones of Culture Wars. Welcome back, Mike.

E. Michael Jones: Thank you, Kevin. Good to be back.

Kevin Barrett: It’s great to have you back. So what should we do first here? PSA disclaimers? I forget which order our slides are in. First, disclaimers: We question everything! 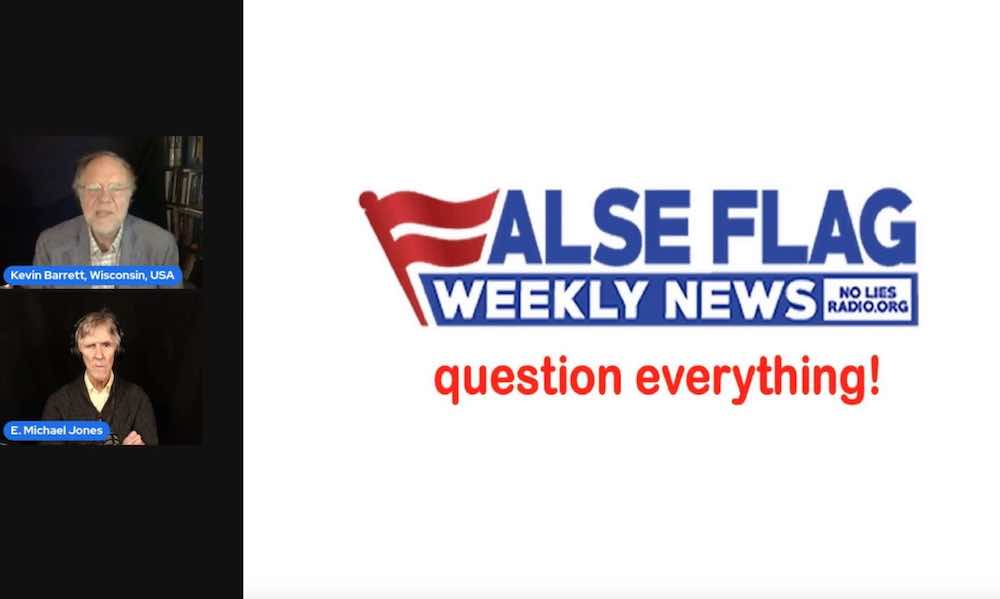 And of course some people can’t handle that, and they get really disturbed. That’s the next slide. So if you’re too disturbed to watch the video, then you must be really disturbable. 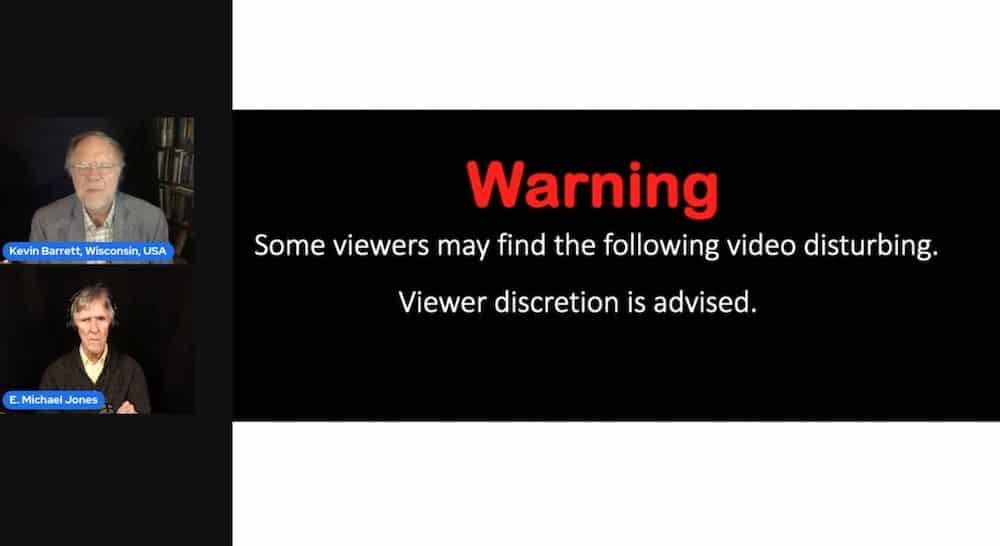 Okay, final final disclaimer: We’re not medical or mental health professionals, so if we tell you to do something crazy like gobble horse pills for COVID— just kidding—you can either listen to us or don’t, but you should definitely consult your medical and or mental health practitioner before you do or don’t. 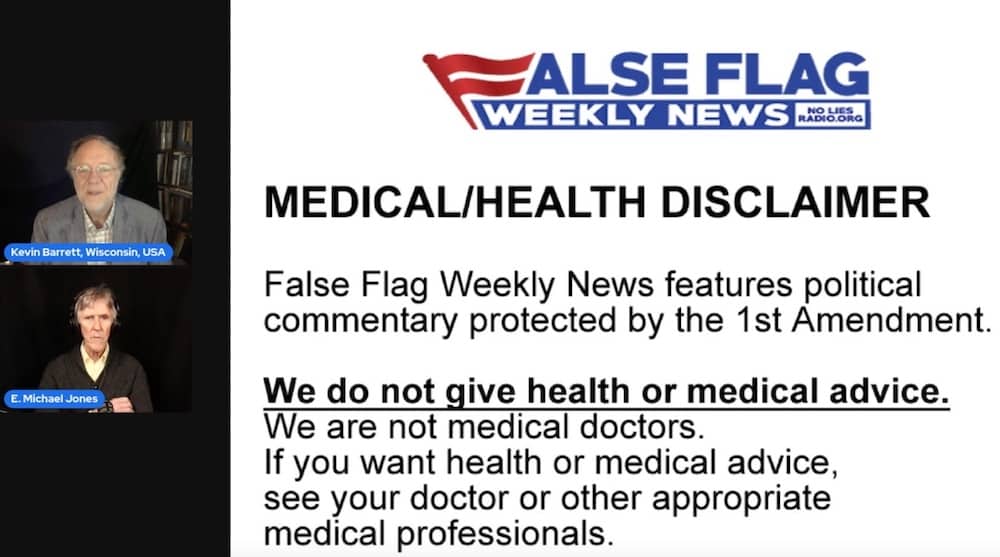 And finally, here we are with our slide of the of the day: 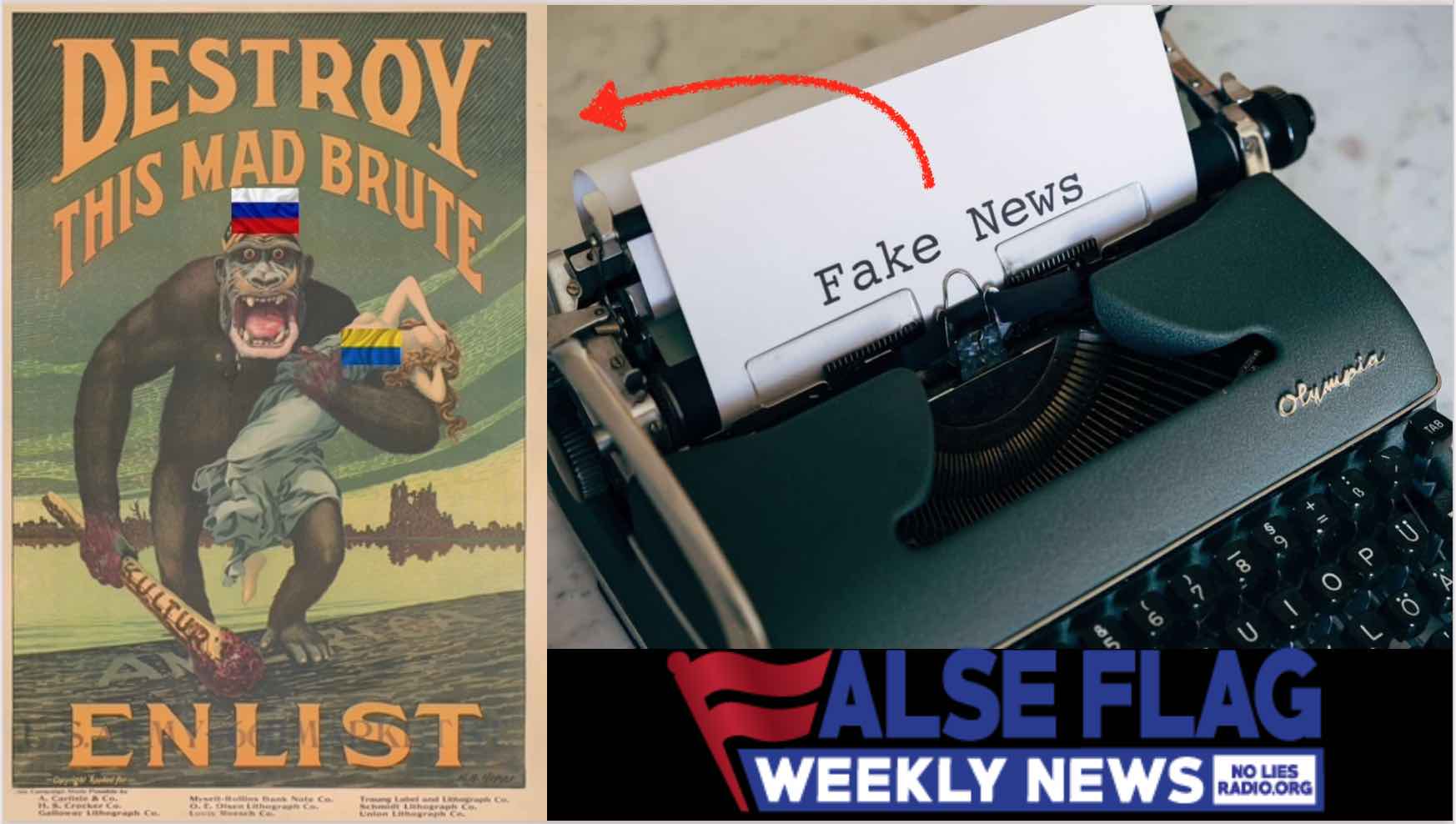 So today, everybody agrees that stupid World War One propaganda and stupid World War Two propaganda looks really, well, stupid. So someday when people look back at today’s World War Three propaganda, will they realize how stupid it was? And the answer, of course, is, no, they won’t, because there won’t be any people left to look back at it. Why not? Because their stupid non-ancestors who bought into the stupid World War Three propaganda and drank the Kool-Aid about the evil Russians blowing up the theaters and maternity hospitals nuked the planet and killed everybody off. So nice work, people! Hope you find a nice planet where you’re going, which is infinitely hotter than Venus or even Mercury, and even hotter than the exact center of the sun. So burn in hellfire you propaganda-addled morons! All right, that’s my sermon for the day, Mike. Am I getting carried away here, or is there an insane propaganda drive to nuke the planet going on in our mainstream media?

E. Michael Jones: No, you’re right on target here, especially with the false flag title of your program. Never in my lifetime have I seen such a shameful propaganda barrage as what we’re seeing right now, trying to demonize Russia and so on and so forth, full of false flag operations and virtually no no alternative sources to counter what’s going on. 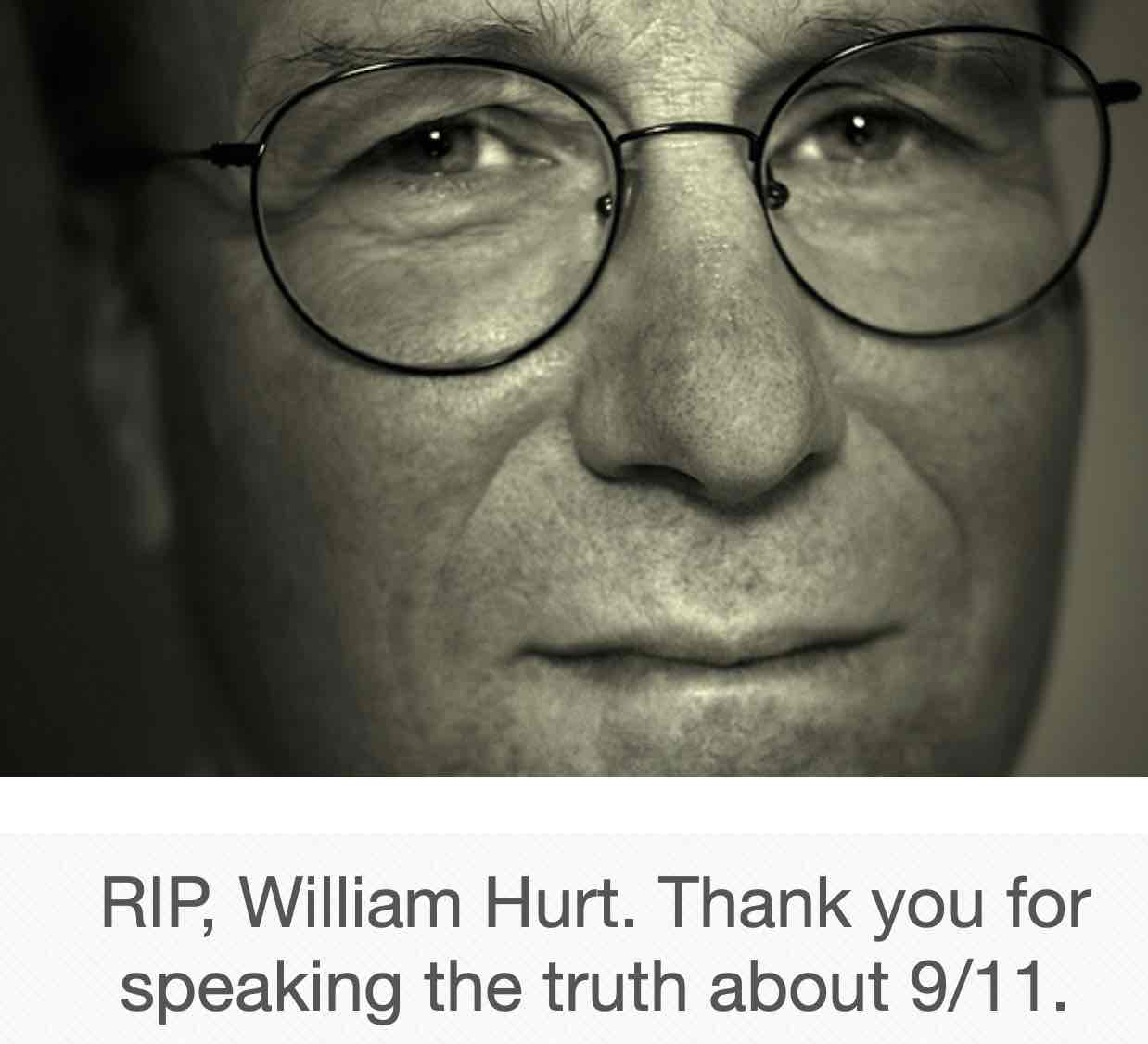 Like…R.I.P. William Hurt. Thank you for speaking the truth about 9/11. He begins his piece by saying, “It took me a long time to face what I knew to be true about 9/11.” And then he passed away a year later after saying that. Probably a coincidence. But in any case, he was quite heroic for finally facing that truth. And the lesson we learned from 9/11—letting them get away with insane, obscene, over-the-top false flag propaganda just leads to trouble down the line—is really coming true in spades today. 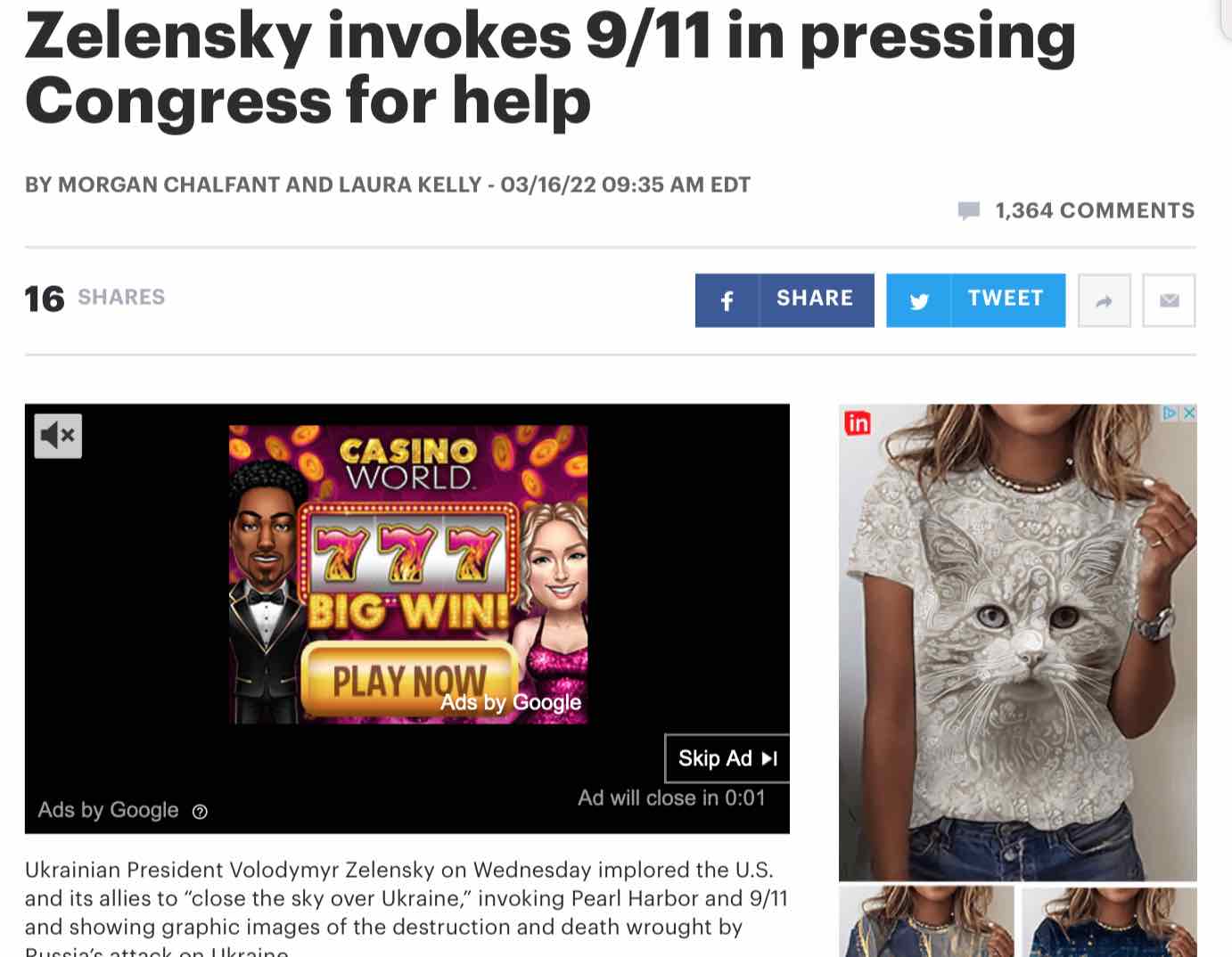 As you said, Mike, this (Ukraine) is a mega false flag. Zelensky gave a 9/11 speech demanding World War Three. He said Russia has launched an assault not only on Ukrainian cities, but also on Ukrainian values and freedom. So, hey, the Russians “hate our freedom!”

Zelensky says, “Russia has turned the Ukrainian sky into a source of death for thousands of people.” Just like on 9/11! And then he shows these horrific war images, just like they showed us the images of the Twin Towers being blown to Kingdom Come with people-eating pyroclastic clouds chasing people down the streets. And of course, all of the horrific images (coming out of Ukraine) are pretty much produced by the Ukro-Nazis themselves, blowing people up in theaters and things like that. So this reminds me of the mass hysteria after 9/11, Mike, but like you said, it might even be worse.

E. Michael Jones: Is that what is? Is the secret message here that (Zelensky) mentioned, Pearl Harbor and 9/11—is he really trying to say in code that what’s going on in Ukraine now is one big false flag operation?

E. Michael Jones: It seems that way. And then there’s the other angle that we have to add to this. When he spoke to the Germans, he brought up the Holocaust. So it’s a combination of the Holocaust, 9/11 and Pearl Harbor all rolled up into one.

E. Michael Jones: And we’re not supposed to notice, even when they put it right in front of us. Is this the best you can do, fellows?

Kevin Barrett: Yeah, well, maybe they’re hiding it in plain sight, maybe it’s a form of gaslighting. It seems like they’re gaslighting us 24-7-365 these days.

E. Michael Jones: Well, it seems that this whole thing is part of a reality show that he (Zelensky) rehearsed for by doing a TV show where he actually played the president.

Kevin Barrett: That was in between playing piano with his penis.

E. Michael Jones: He was totally prepared for this job.

Kevin Barrett: You couldn’t ask for a better Winston Churchill redux. I mean, talk about tragedy repeating itself as farce. My goodness.

E. Michael Jones: The only thing missing here is an adult in the room who’s going to call everyone back to reality. The closest I can think of was John Mearsheimer’s talk seven years ago…

…where he said basically Ukraine should be neutral. We can solve all these problems simply by making the Ukraine a neutral country. Nobody listened to him then. Is there anybody now who is going to be the adult in the room and talk about reality rather than just cheerleading as a part of this propaganda barrage that is not going to succeed? And a lot of people are going to get hurt by them trying to make it succeed. That’s the real tragedy of this. You’ve got these cheerleaders. You’ve got people like Lindsey Graham calling for the assassination of Putin. You’ve got Chuck Schumer sending money so they’re going to buy a lot of nasty weapons that are not going to change the outcome because there’s nobody on the ground there, really. But a lot of people are going to get hurt in the meantime because we’re egging them on to a suicide mission. The propaganda ministry with Zelensky as the main cheerleader is using the Ukrainian people as human shields to advance the Israeli-Jewish-NATO agenda of attacking Russia.

Kevin Barrett: If there is an adult in the room, maybe it’ll be Colonel Douglas MacGregor. And we’ll talk a little bit more about him down the line in this show.

But next: Well, we found a response to stop the Russians in Ukraine! And that is that not only are we going to dump out all of our Russian salad dressing and vodka—and dumping out vodka is a halal thing to do, so I’m all for that—but we’re going to scrub Putin’s name off the Teardrop Memorial in Bayonne, New Jersey, that was given to the United States in 2005 as a gift from Russia to commemorate 9/11. 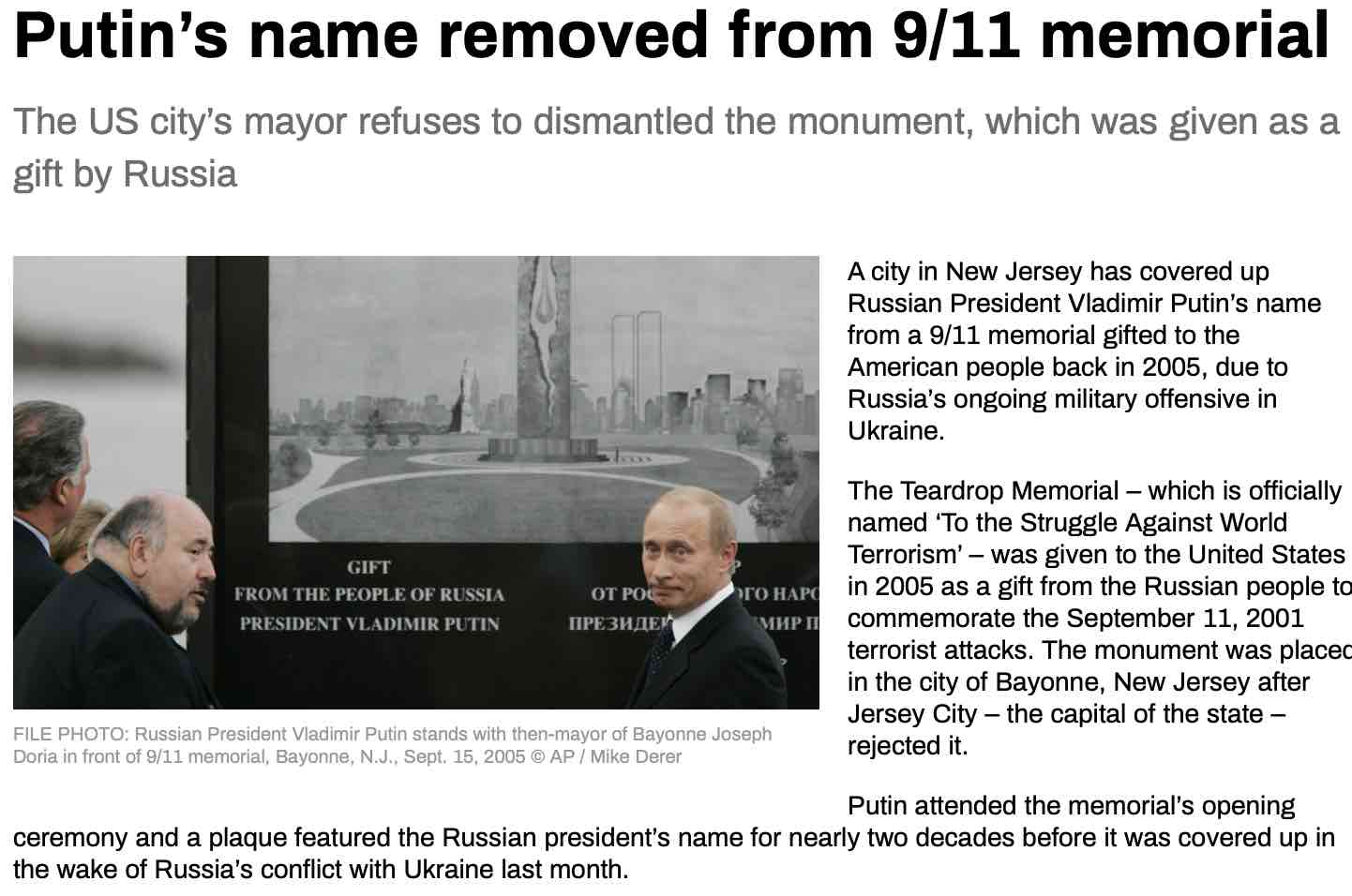 As this article from RT notes, in previous years, critics have protested the monument for “allegedly bearing a vague resemblance to female genitalia.” 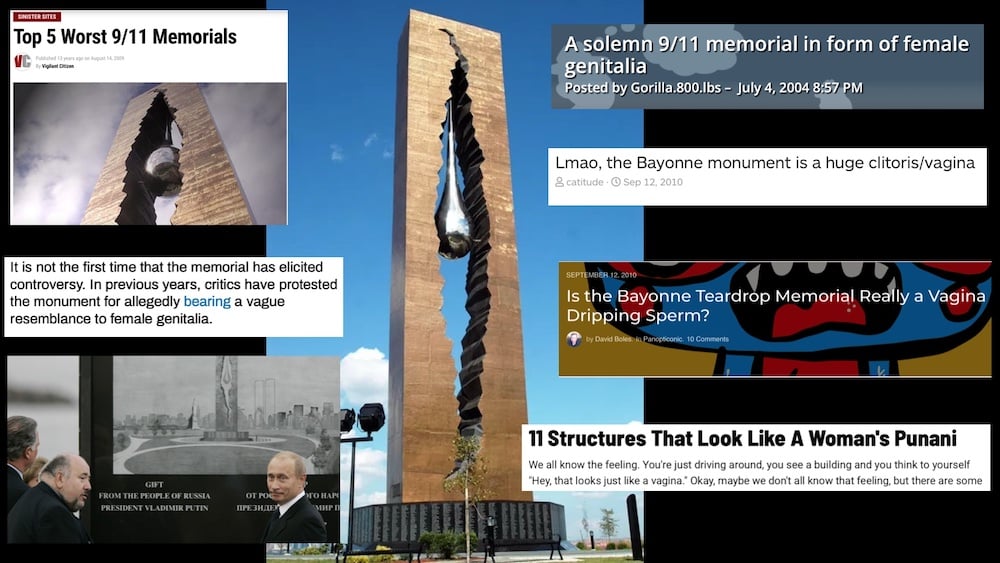 And now they’ve got another reason not to like it. So they scrubbed this thing. What do you think?

E. Michael Jones: Well, this will crush the guy. I mean, if this doesn’t bring him to his knees, nothing will.

E. Michael Jones: So you’ve got two competing ideas of what the war is. On the one hand, you have the Russian troops on the ground actually doing the conquering, working, taking over cities. And then you’ve got the propaganda war in the West basically making one absurd claim after another, engaging in these ridiculous symbolic gestures. Because I think what they feel is that truth is the opinion of the powerful, and that if they can impose their categories of the mind onto the Ukraine as categories of reality they will win the war.