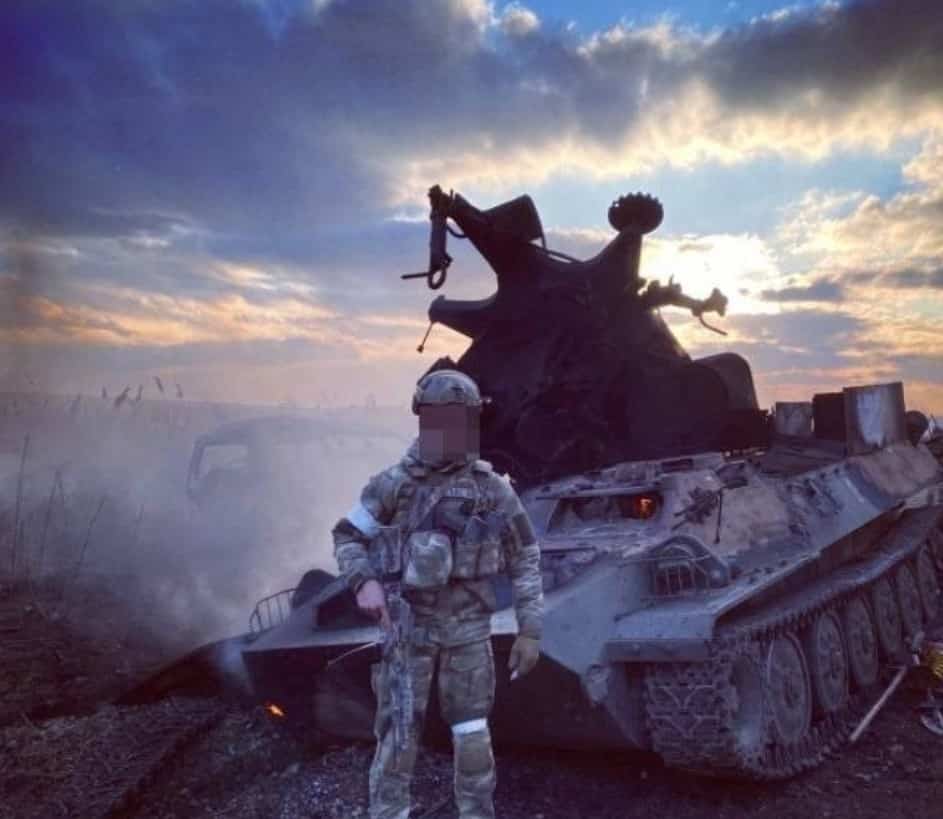 ..Zionazis and their NATO friends including the entire Western media…

The situation in Ukraine during the 25th day of the Russian military operation moved forward in the framework of the previous developments of the week. The Russian Armed Forces, DPR and LPR are conducting active offensive operations in the region of Donbass. Less active offensive is ongoing in Mykoliav Region. In the rest of the country, Russian forces are focused on security and expanding the already established territory of the control.

As of March 20, fierce street fighting continues in the city of Mariupol. Units of the Russian Armed Forces and DPR were developing their advance in the city. The grouping of Kyiv’s forces encircled there is being gradually destroyed.

It is interesting to note that according to satellite images that appeared online the operation is supported by Russian warships. On March 20, it was reported that Deputy Commander of the Black Sea Fleet, Andrey Paliy, died during the operation to liberate the city of Mariupol. Details of the incident remains unclear.

“Andrey Nikolaevich loved Sevastopol with all his heart. His whole life was devoted to the hero city. He was loved and respected by his subordinates. He knew how to find an approach to everyone. Honest, fair, understanding. Andrey Nikolaevich Paliy will be remembered forever in our city like this. I bring to relatives and friends sincere condolences. It is painful and bitter to lose such people. Blessed memory to the real Officer,” Senator from Sevastopol Yekaterina Altabayeva wrote.

Paliy graduated from the Kiev Higher Naval Political School in 1992. In 1993 he refused to take the Ukrainian military oath and went to serve in the Russian Northern Fleet. In 2008, he participated in the peace enforcement operation in Georgia. Meanwhile, Russian and DPR forces advanced in the western and southern parts of Donetsk region. West of Volnovakha, Russian and DPR troops took full control of the village of Stepnoye. Intense clashes continued in the vicinity of Marinka and Avdiivka. After initial tactical successes in the area, the DPR advance there slowed down. Kyiv’s forces showed significant resistance using the line of defense created during the past years there.

In the evening of March 20, the Russian Defense Ministry reported that Russian forces were completing the defeat of the nationalist battalion “Donbass”. During the day, Russian troops advanced 12km and  reached the Nikolske line. The settlement of Sladkoe is now blocked from three sides by the joint forces of Russia and DPR. In this area, Kyiv’s forces lost up to 60 fighters, two battle tanks, three infantry fighting vehicles, six field artillery pieces and mortars. Currently, Russian and DPR forces are working to eliminate the remnants of nationalist formations and the 54th Separate Mechanized Brigade of the Ukrainian Armed Forces in the settlements of Sladkoe, Novoukrainka and Shahterskoe.

The grouping of troops of the Donetsk People’s Republic was pursuing the retreating units of the 53rd Mechanized Brigade of the Ukrainian Armed Forces in the direction of the settlement of Novomihailovka. The DPR military eliminated up to 20 personnel, a battle tank, an infantry fighting vehicle and 3 cross-country vehicles Kyiv’s forces.

At the same time, DPR units penetrated the defense of the 25th Airborne Brigade of the Ukrainian Armed Forces and reached the settlements of Kamionka and Novoselovka 2.

In the sector of operations involving LPR troops, main clashes are taking place near Popasnaya, Severodonetsk and Lysichansk. The Severodonetsk-Lysichansk remains the main priority of the advancing group of LPR forces.

In the south of Kharkiv Region, the area of Izum is the main hot point. Fighting continues near Kamenka south of it. The Russian Armed Forces seek to eliminate the defense of Kyiv’s troops there to open the door for advance on Slavyansk and Kramatorsk. In own turn, Kyiv’s forces are urgently preparing for the defense there.

Additionally, on March 20, Russia’s Rosgvardia announced that servicemen of the department had captured several leaders of Ukrainian nationalist formations in the village of Izyum, Kharkiv Region. According to the released data, military personnel and employees of several special forces also seized important documents and captured “several accomplices of the SBU” (Security Service of Ukraine).

The region of Kherson is now fully secured and became a logistical hub for the group of Russian forces involved in both operations around Mariupol and Mykolaiv.

The road from Crimea to Kherson city is fully secured by Russian forces. A lot of destroyed military equipment is shown in the video also:

In the region of Mykolaiv, Russian troops tightened their siege on the provincial capital by expanding their zone of control around it and establishing strong points in such areas as Pervomaiske and Snigirevka.

Pro-Kyiv sources also complain about the Russian progress towards Kryvyi Rih. Nonetheless, the situation there remains unclear and most likely the developments south of it is linked with the Russian effort to secure the areas of Mykolaiv Region.

In the regions of Chernihiv and Sumy in northern Ukraine, the military situation remained almost the same. All the large cities are blocked by the Russian military that is not interested in storming them as of now. The focus in the north is Kyiv.

As of March 20, Russian forces continued to expand their control over the areas west of Kyiv city. Russian units have been gradually advancing towards the towns of Makarov, Belgorodka and Byshev. Meanwhile, Russian troops have been conducting security operations in the already liberated villages and towns there. Recently, one of such operations took place in the area of Kachali. Units of Kyiv’s forces are still present in its countryside. Fighting also continued near such villages as Lyutezh, Bucha and Irpin in Kyiv Region.

According to the Russian side, since the start of the military operation, Russian forces have destroyed 214 unmanned aerial vehicles, 1483 tanks and other armored combat vehicles, 150 multiple rocket launchers, 584 field artillery and mortars, as well as 1279 units of special military vehicles.

The developments on the ground indicate that the Russian Armed Forces are currently involved in limited offensive operations in the north and south of Ukraine. This phase of the advance is likely dedicated to the full liberation of Mariupol city, the areas west of Donetsk city, as well as setting conditions for further progress in Mykolaiv Region and around Kyiv city. On the rest of the frontline, the Russian military keeps a tactical pause.

On March 21, Moscow and Kyiv are set to hold a new round of talks. In the case of the lack of progress in talks (what is widely expected), the Russians will likely continue their limited operations in the north and south. It is possible that the short-term goal will be the full control of Donetsk and Lugansk regions as well as the full blocking of Mykolaiv city.