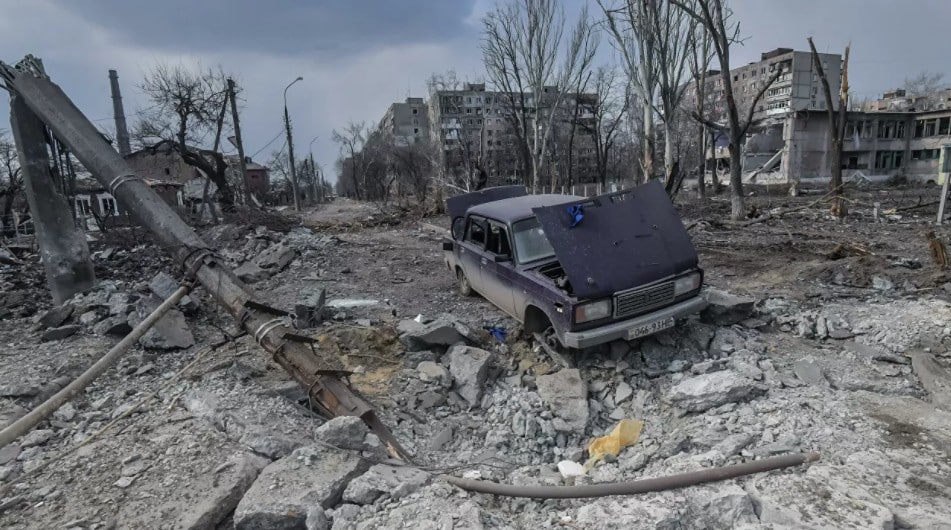 SputnikNews.com – Earlier this month, units of the Donetsk People’s Republic blocked Mariupol and are now trying to clear Ukrainian troops and extremist battalions, including the Azov Regiment. The situation in the city remains tense, with residents lacking food and electricity and having to leave the city amid continued armed clashes in the downtown area.

Kulayeva, who earlier fled Mariupol, said that the neo­-Nazis, who took up positions in the city’s newly repaired pool, then demolished it and “also killed a lot of people” there.

The woman suggested that by obliterating the pool, members of the Azov Regiment apparently wanted to intimidate the local population.

“There was no stone left unturned” in Mariupol as a result of massive shelling of the city by Azov Regiment neo-Nazis, she said, adding that an apartment building she lived in was destroyed and that she was surprised she and her loved ones survived.

According to Kulayeva, it was Azov militants who blew up a drama theatre in Mariupol earlier this week.

She spoke after Ukrainian authorities earlier accused the Russian military of carrying out an airstrike on the Mariupol Drama Theatre on 16 March. The Russian Ministry of Defence rejected the accusations, stressing that its aviation “did not implement any tasks regarding strikes on ground targets” in Mariupol.

The ministry added that according to “available reliable data, the militants of the nationalist regiment Azov made a new bloody provocation, blowing up the [drama] theatre building [in Mariupol]”, which was earlier mined by them. The ombudsman of Ukraine, Lyudmila Denisova said that there is no information about casualties of the explosion.

The ministry earlier accused the Azov detachment of using heavy Grad artillery to strike residential areas and a school on the outskirts of Mariupol, which killed multiple civilians.

The situation in Mariupol Remains Tense

Mikhail Mizintsev, the head of the Russian National Defence Control Centre, has since said that Moscow informed Kiev that it is ready to let militants leave Mariupol via humanitarian corridors to save the city and its civilians. He added that Russia is ready to give guarantees to militants that they will not be harmed if they lay down their arms.

Mariupol has been the site of intense fighting between the forces of Ukraine and the Donetsk People’s Republic (DPR) in recent weeks. On 7 March, DPR forces said that they had encircled the city and started clearing it of Ukrainian troops and extremist battalions, including the Azov Regiment. According to a Sputnik correspondent, there was no electricity in the city on Friday, while the population has run out of provision as there are no food supplies. In addition, almost all of the stores are either destroyed or have been looted, the correspondent added.

On 24 February, Moscow launched a special military operation to demilitarise and de-Nazify Ukraine after weeks of escalating shelling, sabotage, and sniper attacks by Ukrainian forces against the Donbass republics, whose predominantly Russian-speaking population has been subjected to “abuse and genocide […] for eight years”, according to Russian President Vladimir Putin.

Moscow has repeatedly stated that the goal of the operation is to neutralise Ukraine’s military capacity and not harm the civilian population of the country.

The Azov Regiment, formed in 2014 as a group of neo-Nazi volunteer paramilitaries and infamous for their 2nd SS Panzer Division Das Reich-style rune logo, has since been integrated into the Ukrainian National Guard.