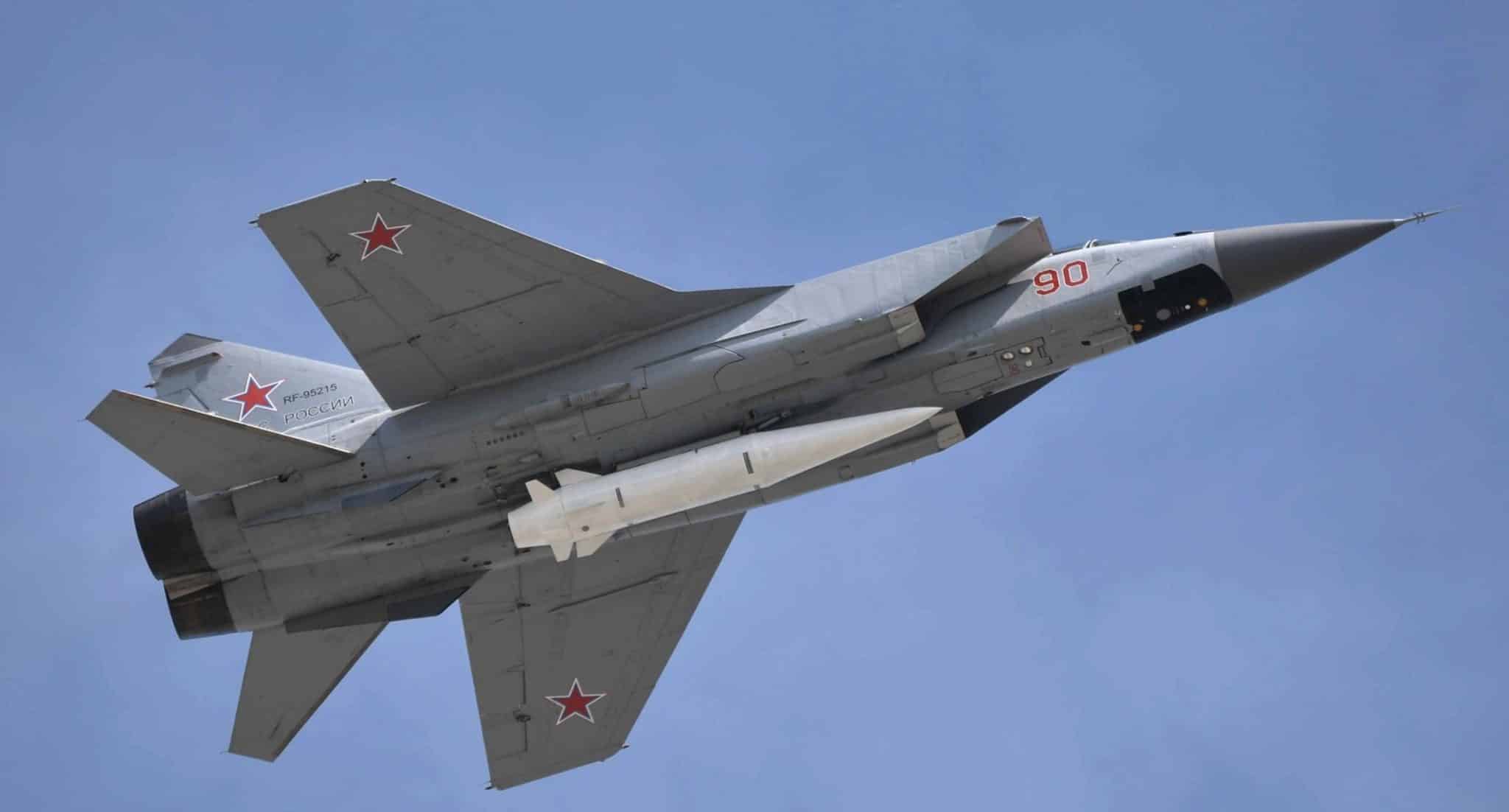 SouthFront: The 26th day of the conflict came in the shadow of Russian hypersonic weapons that were for the first time seen in action during the operation in Ukraine.

Video released of a missile strike on a shopping center 'after a Ukraine military vehicle tried to hide in the now destroyed shopping center, in Kyiv. Russia has repeatedly warned #Ukraine against using civilian buildings as cover. pic.twitter.com/VR4LF5WKTG

In particular, on March 21, the Russian Defense Ministry released details on the destruction of the military infrastructure assets of Ukraine with Kinzhal with hypersonic aeroballistic missiles.

▪️Last night, the Russian military with a precision strike destroyed a battery of Ukrainian MLRS that were hiding in an idle shopping center in Kyiv. pic.twitter.com/fivAeg5RpE 1/4 The main thing from the new statement of the Ministry of Defense of the Russian Federation:

On March 21, the Russian military destroyed a battery of Ukrainian MLRS in an idle shopping center in Kyiv with precision-guided weapons; pic.twitter.com/fQuW0S38TM

According to the Russian Defense Ministry, Kinzhal missiles were used from the range of more than 1,000 kilometers.

“The flight time of the hypersonic missile was less than 10 minutes.

Due to hypersonic speed and ultra-high kinetic energy, the warhead of Kinzhal missile complex destroyed a protected underground arsenal located in a mountainous area, built in Soviet times to store special ammunition and missiles.

The destruction of a large fuel depot in Konstantinovka by Kinzhal hypersonic missile was due to its invisibility and invulnerability to any means of enemy air and missile defence.

Combat use of Kynzhal aviation missile system confirmed its effectiveness in destroying highly protected special enemy assets. The strikes on the military infrastructure of Ukraine by this missile system will continue within the special military operation,” the defense ministry said.

The Russian military recalled that hypersonic missiles were used with conventional warheads.

“Although experts are well aware of the capabilities of this weapon, not only in terms of range, but also in terms of the type of charge,” the statement added.

As to the developments on the ground, forces of Russia, DPR and LPR continue their gradual advance on positions of Kyiv’s forces. The most active operation is ongoing in the region of Donbass. The situation in the rest of operation areas remains in the state of ‘tactical pause’. Russian forces avoid storming large cities there. In own turn, Kyiv’s forces use residential areas and civilians as “human shields” to deploy their artillery systems and conduct massive fire on Russian servicemen. The Russians respond with precise artillery and air strikes on Ukrainian units hiding in cities.

Example of such approach was recently seen in Kyiv. On March 21, the Russian Defense Ministry released a video showing a precise strike on the gathering point of military equipment of the Ukrainain Armed Forces in the Vynohradar district of the Kyiv area.

According to the statement, units of Kyiv’s forces were hiding behind civilian buildings and were using multiple rocket launchers against Russian troops. The area of ​​the nearby shopping center was used as a large base for storing rocket-propelled ammunition and reloading multiple launch rocket systems.

On the night of March 21, a battery of Ukrainian multiple launch rocket systems and their ammunition storage base in this non-functioning shopping center were destroyed in a strike with high-precision long-range weapons.

“We would like to draw the attention of the Western media once again. We have presented absolute evidence of the criminal use by the Kiev nationalist regime of civilian objects in residential areas of Kiev and other cities of Ukraine, as firing positions of artillery and rocket systems,” the Russian Defense Ministry said in a comment on this strike.

Nonetheless, it is hard to expect that MSM will pay any real attention to the provided facts.

The next important point capturing of which would allow blocking Kyiv from the southwest is the town of Boyarka. Russian forces are advancing on it from the north and northwest.

In the northeastern sector, Chernihiv and Sumi remain fully blocked and the situation is stable there with occasional local operations of Russian forces to neutralize units loyal to Kyiv’s forces.

The situation is same around Kharkiv city. Positional fighting is reported north and east of it. The road from Kharkiv to the southwest, towards Dnipr city, remains not blocked. No significant progress was also achieved by the Russians in the area of Izum in the south of Kharkiv Region.

The most intense military developments are taking place in Donetsk and Lugansk Regions. First of all, all eyes are now on Mariupol city. Fierce street fighting continues there with daily progress by Russian and DPR forces. The grouping of Kyiv’s forces there suffer casualties on daily basis.

As expected, the Kyiv government rejected the proposal of “corridors” for its units that want surrender in Mariupol. The main goal of the Ukrainian leadership is to prolong the fighting with as much civilian casualties as possible (to create useful image for MSM and Western diplomats). The town of Ugledar mostly fell under control of the DPR and the Russian Armed Forces after a series of clashes here. Nonetheless, smaller settlements in its countryside still have to be secured. The advance towards Kurakhov is slowly ongoing.

The DPR advance on Avdiivka and Maryinka, near Donetsk city, continues without significant achievements of DPR forces. At the same time, the Kyiv government does what it does best – terrorizes civilian population. On March 21, local authorities of Makeevka city (DPR-controlled area) reported that at least two Tochka-U ballistic missiles were launched on the residential areas by Kyiv’s forces. Both missiles were intercepted by DPR air-defense forces. Nonetheless, the vestiges of the missiles fell in the districts of the city. As long as Kyiv troops remain near Donetsk and Lugansk, they will continue to intentionally strike civilian targets there.

Meanwhile, forces of LPR and Russia have been advancing in the Severodonetsk-Lysichansk agglomeration. After the fall of Rubezhnoe, Kyiv troops focused on the defense of the southern part of Severodonetsk and the center of Lysichansk.

The town of Stepnoe (now it is in the hands of Russian-led forces): In the southern sector, on the western bank of Dnipro River, the grouping of Kyiv’s forces in Mykolaiv city suffers from regular precise strikes on its equipment and gathering sites. Initial ‘victorious statements’ of the local authorities changed with complaints that the Russians do not rush to directly attack fortified positions. Instead, Russian units are blocking the city from the south, east, and northeast and launch strikes on detected targets.

In general, units of the Russian Armed Forces, DPR and LPR are still working to achieve the declared goal of the full liberation of Donetsk and Lugansk regions. Advances in other areas rather play a secondary role in these conditions. As soon as this goal is achieved, and if no diplomatic agreement is reached with Kyiv (what is likely), the time will come for further actions.