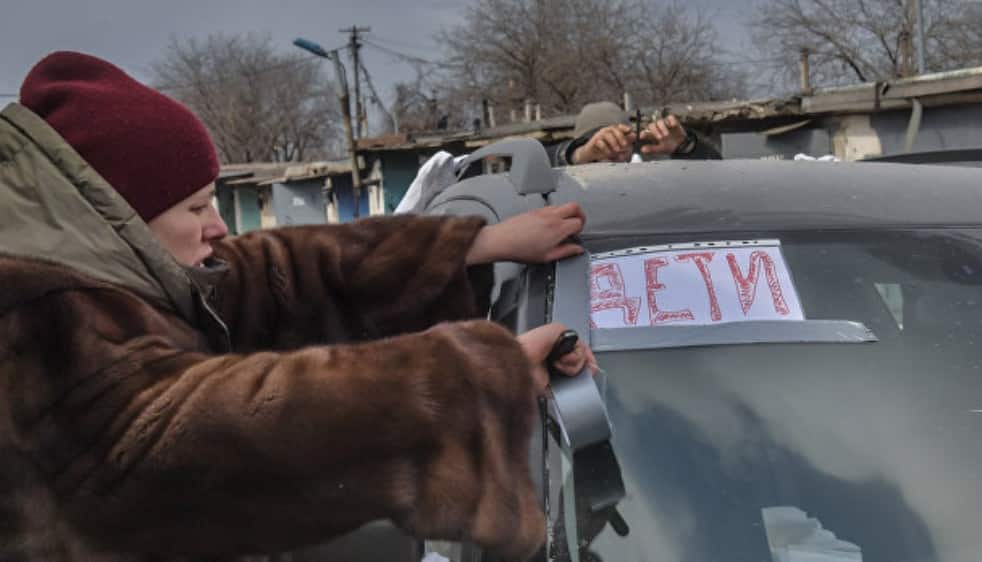 Ukraina.ru – There are urban battles in Mariupol, the Russian Ministry of Defense announced the evacuation of 43,000 people. At the exit, there are columns of cars with white flags – symbols of refugees, with the inscriptions “Family” or “Children”. At the checkpoint, the military check documents, men of military age are checked for tattoos, they are looking for Azov fighters trying to escape

Along the road with refugees, people are stealing food from warehouses – someone is carrying boxes of oranges, someone is pushing carts, someone is dragging boxes. There is a broken Metro hypermarket nearby, the gates to the parking lot were demolished – either by armored vehicles that entered the city, or someone rammed them in a truck in order to take out food later. For days on end, it was the only food available in the city. Opposite the melted Port City shopping and entertainment complex, there are black burned-out high-rise buildings. In the courtyard, fires are the only source of heat, there is no gas, no water, no light – broken wires hang from supports.

“The second mine when there ***** (hit – obscene), all the windows were knocked out. Those with blue armbands (the insignia of the Ukrainian security forces. – Ed.), They robbed all the shops, took everything out by trucks. The Russians did what – well, the plane was flying, the radar mast was demolished, right here, behind the house, ”the talkative grandfather in the house on Kuprin Street tells how it all began – relatively harmlessly. Then, after wandering mortars, urban battles began, residential buildings on the outskirts did not spare both sides. “There’s a funnel over there – it’s an aerial bomb!” the woman retorted sharply. “Air bomb”, – grandfather agrees, they say, what to argue with. “Wait, you answer me, where is Putin looking?” Another woman intervenes sharply.

A little further on, the People’s Militia fighters, hiding behind a broken car, are trying to figure out if the sniper is working from a high-rise – the main forces of the Ukrainian army have been pushed back, they will be able to drive the arrow and take it, they hope. “In the Great Patriotic War, we also took our cities … Remember Kyiv, Khreshchatyk, how it looked when it was liberated. And then they will kick out the tenants and shoot at us from all floors, ”the military man speaks harshly and assertively, as he will leave no doubt.

On the site in front of the Terra Sports complex, the townspeople are gutting cars – they are dismantling abandoned cars into knots so that they can move around the broken city, and they are trying to determine from the creeping smoke what is burning – the drama theater or Azovstal. In the yard, a woman cooks food on fire for the entire entrance. “Thank you” to you, we have all the spans collapsed … “, – she throws the military passing by, they do not answer. The inhabitants of the city are angry – and often on both sides.

“The plane was chasing tanks, Grads, dropping where the 67th school (probably the 27th. – Ed.), It is intact, well, relatively intact, and everything around is pitted. I myself saw the Ukrainian “Grad” driving around and hitting, and the plane comes, but the “Grad” is no longer there … ”, – the man in the courtyard of the house on Troitskaya Street speaks irritably, the pilot, who could not cover the gunners in any way, became a disaster. Then he waves his hand, they say, what can I say, and goes into the neighboring yard.

Residents could not escape from the city – they either did not know about the humanitarian corridors, or they did not work. “The Ukrainian military told me personally: “The exits [from Mariupol] are all mined, if you try to go out along the green corridor, you will be shot.” The Ukrainian policemen told me the same thing,” says a man who introduced himself as Alexander, and shows with his hand where exactly he heard such words from his “defenders” – in his own yard: “Here we spoke with them.”

The looting, he said, also began with the retreating Ukrainian military: “The warriors came up [to the store], kicked the doors and said, ‘Take what’s left, whatever you want,’” he recalls. “But the Azov people came, in the twentieth microdistrict, they say, give us the keys, we will cut everyone’s throats otherwise … Yes, and recently the car was taken away from a woman, she asked, her husband is sick,” Alexander tells how Mariupol residents are used to violence.

His wife Irina is crying, somewhere during the evacuation from the Left Bank, in the area of ​​Ilyich Plant, their son remained – no one could get through the city battles to him, the connection does not work, his parents do not know anything about his fate. “We have nothing to drink,” she answers the question of what is lacking in the first place and tells how Mariupol residents survived without the most necessary. “There is no drinking water at all, we drank water from puddles, drank technical water, the one that flowed from the roofs, melted the snow, and drank, there was a queue here to collect water from the roofs.” 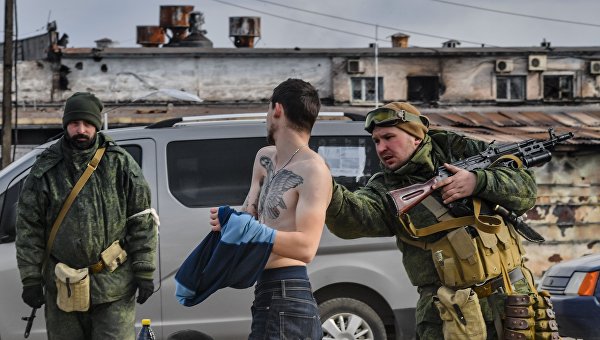 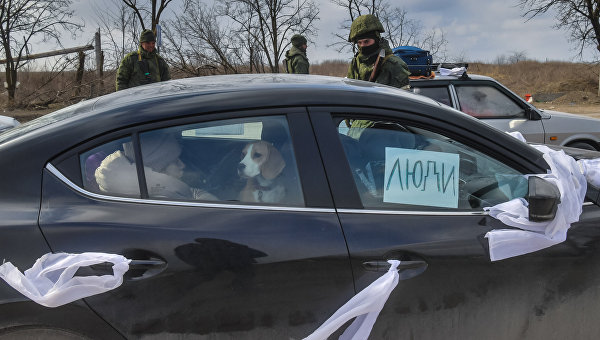 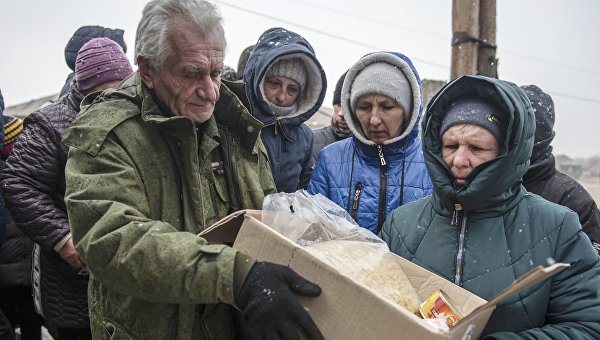 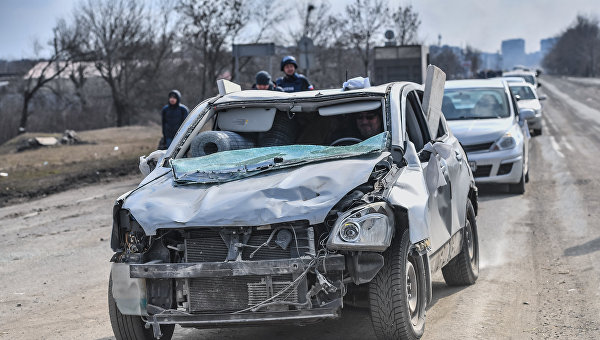 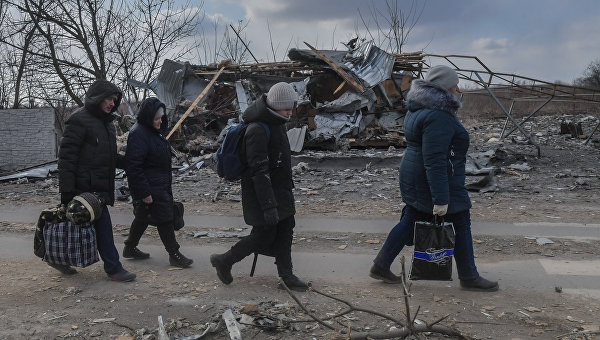 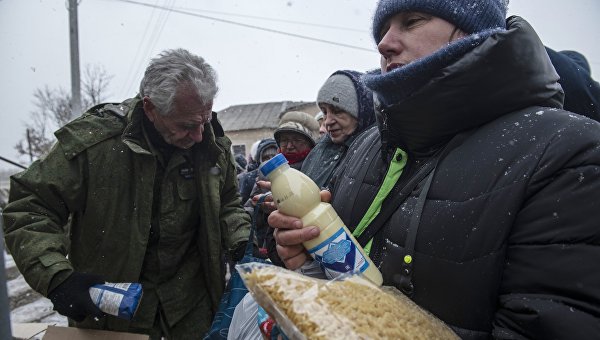 Groups of people with plastic five-liter bottles are stretching past the yards somewhere in the direction of the sea – for water. “You can already go to the spring (spring, well. – Ed.),” they explain.

“The firewood was broken for us,” Irina points out with a glance at the trees and bushes cut by fragments. “And now we are taking out the furniture from the apartments to heat.” And again he breaks down into tears, pointing to his tracksuit in the basement dust: “I walked in heels, with a haircut …”. “There is also a manicure – leftovers, and the hands are black,” her neighbor shows a really blackened hand with flirtatious colored nails.

Irina returns to the war again – she shares fragments of reality that became life for three weeks for the inhabitants of Mariupol: “We were bombed from both sides – both Russia and Ukraine … They knocked on the hatch: “Hello, is there anyone alive?” I liked the appeal, they brought cookies, and the next day they came, they brought an eggplant of water, ”she looks up at the broken high-rise building.

Next to the street is a barricade of new buses – broken. Who could stop such a barrier, Irina does not know. “The mayor launched vehicles for the defense of the city, bought with our budget money,” she regrets the shot cars.

Neighbors come up to the conversation – from a purely practical topic, how to evacuate, everyone again switches to what they have experienced: “The Russians took my father-in-law and mother-in-law to Talakovka … They will take them out, but if they don’t go, then no one comes here yet, you have to leave the house yourself … On the 12th, in the morning, they bombed from an airplane … Shelling from two sides, and they shoot, and they shoot … Neither light, nor water, nor gas, and they did not let go … ”

“And in twenty micro districts, in one house of the VSE (fighters of the Armed Forces of Ukraine (AFU). – Ed.), there are forty people, in the second, Russians,” someone reminds us that not everything is over yet.

“What a city we had, what a city we had,” Irina breaks down again into sobs, but pulls herself together and lists what is needed for life at least for a few days. “We will not leave, people, we are staying here, we need light and water, and milk formula for children.”

SOURCEUkraina.ru
ATTENTION READERS
Due to the nature of independent content, VT cannot guarantee content validity.
We ask you to Read Our Content Policy so a clear comprehension of VT's independent non-censored media is understood and given its proper place in the world of news, opinion and media.