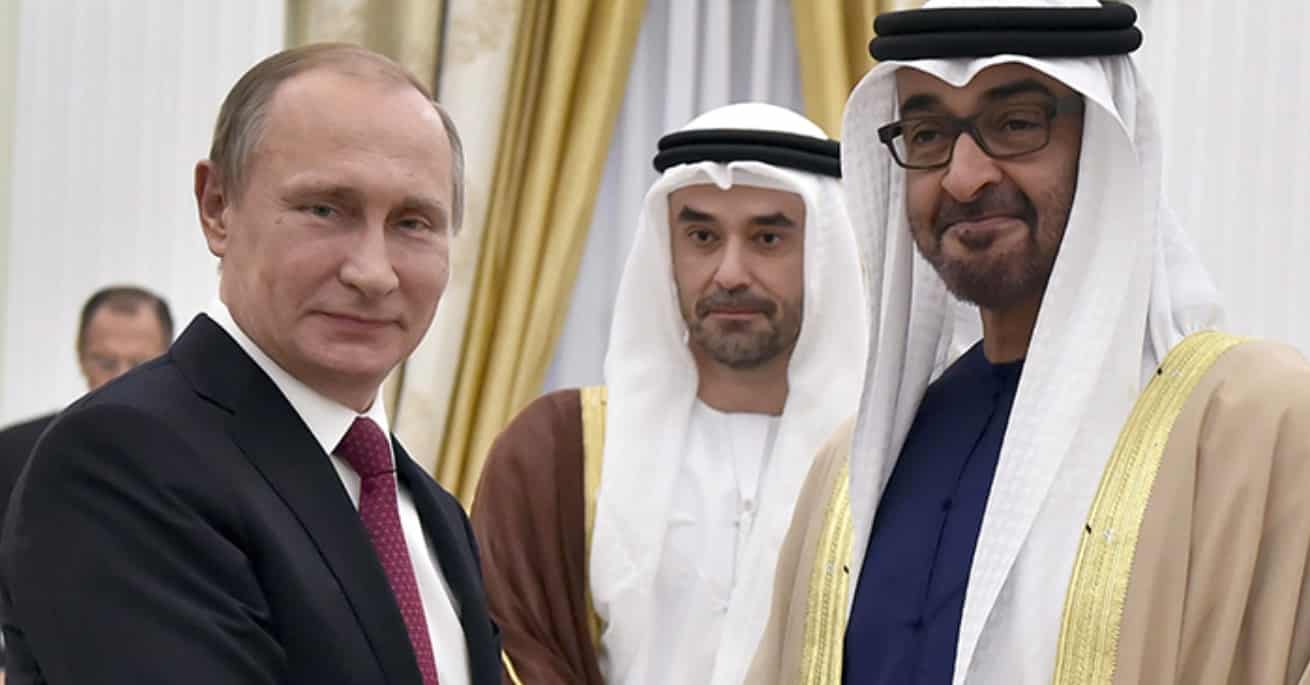 TheCradle.co – Washington’s geopolitical cards are dwindling rapidly. The high-level UAE visit to Moscow this week has consolidated OPEC+ support for Russia in the energy war now raging between east and west.

The UAE is the fourth West Asian state to have traveled to Moscow in the past week to strike agreements unfavorable to Washington.

Four top foreign minster level diplomats from Qatar, Iran, Turkey, and the UAE traveled to Moscow this week, in as many days, in an impressive display of strategic realignment by regional states against the backdrop of the US-Russia conflict unfolding over Ukraine.

The arrival in Moscow of the UAE Minister of Foreign Affairs Abdullah bin Zayed bin Sultan Al-Nahyan on Thursday is the most striking. This is happening within a fortnight of the country’s inclusion on 4 March in the Grey List of the global financial crime watchdog, the Financial Action Task Force (FATF), due to alleged financial crimes. The FATF recommendations for the UAE include:

The FATF is one of those tools of torture that the west has finessed in the international system to humiliate and punish developing countries whom it wants to teach a lesson or two. A cursory look at the countries figured in the 22-member Grey List would reveal that the UAE shouldn’t really belong there — Albania, Burkina Faso, Haiti, South Sudan, Uganda, Yemen, and so on.

But the west’s calculation is that the economy of a country gets affected in a negative manner when it figures on the Grey List — with international financial institutions starting to look at it as a risky nation for investment, which in UAE’s case also renders a lethal blow to its flourishing tourism industry.

Indeed, this happened under the watch of an American, Vincent Schmoll, who is holding interim charge as the acting FATF executive secretary since January. Schmoll used to be a functionary at the US Treasury. Conceivably, Washington’s writ runs large in this episode.

US-UAE relations have been experiencing some tumult during the past year. The trouble began soon after President Donald Trump’s departure from the White House. In January 2021, on Trump’s last full day in office, Abu Dhabi had signed a $23 billion agreement to buy 50 F-35 fighter jets, 18 Reaper drones, and other advanced munitions, but incoming President Joe Biden froze the deal as soon as he entered the Oval Office.

A number of factors might have influenced the Biden administration’s calculations, apart from the fact that the lucrative F-35 deal was a Trump legacy. As it transpired, in a delaying tactic, Washington began voicing serious concerns about the UAE-China relationship and the particularly strong economic ties developing between Abu Dhabi and Beijing. Notably, Washington wanted the UAE to put an end to a 5G contract with Chinese tech giant Huawei, which is the undisputed global leader in next-generation 5G technology.

Meanwhile, in addition to the Huawei issue, US intelligence agencies claimed to have discovered that Beijing was building what they thought to be a secret military facility at the Khalifa Port in the UAE.

Emirati officials denied the allegation, but under pressure from Washington, were forced to halt the project, although the Persian Gulf states in general, and the UAE in particular, do not like being pushed to take sides between Washington and Beijing. They consider that their best interest lies in maintaining neutrality and balancing relations.

The end result, as everyone knows, was that much to the annoyance of Washington, Abu Dhabi finally hit back by opting for 80 Rafale combat aircraft from France in a deal worth over $20 billion last December.

Then came the bombshell in February with the sensational disclosure that the UAE has plans to order 12 L-15 light attack planes from China, with the option of purchasing 36 more. A UAE defense ministry statement said the purchase is part of the country’s efforts to diversify weapon suppliers. As an aside, the UAE air force operates mainly American-made F-16 and French-made Mirage fighters.

Soon after that, according to a Wall Street Journal report last week, Crown Prince Sheikh Mohamed bin Zayed bin Sultan Al Nahyan failed to take a call from Biden who apparently wanted to discuss the US expectation that the UAE would pump more oil into the market to bring down skyrocketing prices.

Yet another complicating factor is that the Biden administration blundered into the intraGulf rivalries by designating Qatar as a ‘Major Non-NATO Ally’ (MNNA). On 31 January, Qatari Emir Tamim bin Hamad Al-Thani became the first Persian Gulf leader to meet with Biden in the White House and media accounts of the visit highlighted a $20 billion deal for Boeing 777X freighter aircraft. Additionally, the emir met with Defense Secretary Lloyd Austin and discussed weapons sales.

Given this backdrop, Foreign Minister Abdullah Al-Nahyan’s arrival in Moscow couldn’t have been any less dramatic. The Russian side has divulged few details about the visit. The big question is whether any arms deal was been discussed.

Russian Foreign Minister Sergey Lavrov made a statement that the talks covered “a wide range of issues related to our bilateral relations and international agenda. For obvious reasons, we paid a great deal of attention to the Ukrainian developments. We spoke in detail about the goals and objectives of Russia’s special military operation in Ukraine to protect people from the Kiev regime, and to demilitarize and de-Nazify this country.”

The UAE foreign minister reportedly told Lavrov that his country aimed at further systematic development of relations with Russia and diversification of the areas of bilateral cooperation. In what was possibly an indirect swipe at the US sanctions aimed at isolating Russia from the world economy, Al-Nahyan said:

“It is always important for us to keep our finger on the pulse and make sure that relations between Russia and the UAE move forward. There is no doubt that we are aimed at the systematic development of these relations and the diversification of the areas of bilateral cooperation so that it meets the interests of both our citizens and state institutions and other structures.”

He stressed that the parties should strengthen cooperation on energy and food security. Clearly, the US cannot count on the support of the Persian Gulf region in its campaign to isolate Russia or to dismantle OPEC+ – an increasingly influential body consisting of the 13 OPEC members plus ten non-OPEC oil exporters, which is chaired by the largest producers Russia and Saudi Arabia. The Gulf countries are one by one, seeking out Russia to signal their solidarity and register their own desire to shake off US hegemony.

Interestingly, last Tuesday, Bahrain’s King Hamad bin Isa Al-Khalifa had called Russian President Vladimir Putin to discuss “topical issues of Russia‒Bahrain cooperation in politics, trade and the economy… (and) expressed the shared intention to further develop the friendly ties between Russia and Bahrain.” This, despite the fact that the US Navy’s Fifth Fleet and the US Naval Forces Central Command are based in Bahrain.

Such display of solidarity by the ‘non-western international community’ brings some vital nuance to the global geopolitical chessboard: for one, it makes a mockery of the western sanctions against Russia. The Gulf countries are avid ‘globalizers’ and trading nations — Dubai, in particular. As time passes, western companies are sure to find ingenious ways to trade with Russia via resourceful intermediaries in the Gulf region.

Abdullah Al-Nahyan’s trip to Moscow is a demonstrative act of defiance, both symbolically and strategically. It is a mark of the Persian Gulf region’s growing alienation from Washington. Reports suggest that UK Prime Minister Boris Johnson, who traveled to both the UAE and Saudi Arabia this week to press for increased oil production to lower oil prices, also came back empty-handed.

Contrary to Washington’s hopes, there is every likelihood that the OPEC+ will continue to strengthen its strategic autonomy vis-a-vis the US. Previously, Russia used to be a voice of moderation within the group. This will have profound implications for the world oil market.

The high attention Russian diplomacy paid to the West Asian region in the recent decade is returning dividends, for sure. Russia offered its Persian Gulf interlocutors something they never experienced before with great power – an equal partnership based on mutual respect.