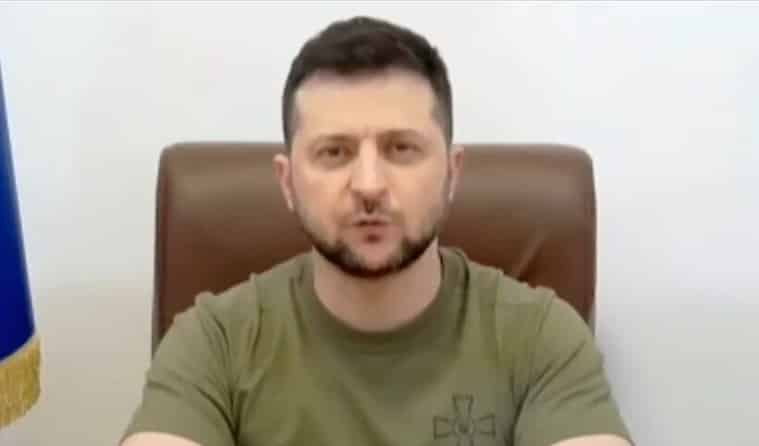 Zelensky forgot that it was the Russian Red Army who liberated Jews from Nazi camps and who were the first to reveal the Holocaust! The same Nazis he is in bed with against Russia! https://t.co/ftzHzLnr3q pic.twitter.com/ibZErH5lnN

Several Israeli lawmakers criticize Ukrainian President Volodymyr Zelensky for drawing comparisons between the Holocaust and Russia’s invasion of Ukraine during his speech to Knesset members.

“I admire the Ukraine president and support the Ukrainian people in heart and deed, but the terrible history of the Holocaust cannot be rewritten,” Communications Minister Yoaz Hendel tweets.

Israel has a higher Russian population (15%) than America's black population (13%). Zelensky's attempt to shame Israel into siding with Ukraine against Russia won't work – especially not with the dirty tactic of accusing Israel's Jews of supporting a new Holocaust. pic.twitter.com/FsT9XIbNmn

Hendel notes part of Nazi Germany’s genocide of Jews “was also carried out in the land of Ukraine.”

“The war is terrible but the comparison to the horrors of the Holocaust and the final solution is outrageous,” he says.

Zelensky's claim that the Ukranians were righteous gentiles who saved Jews in the Holocaust is sick historical revisionism. The Ukranians were active, enthusiastic Nazis. Ukrainian Jewry wasn't annihilated in Poland, but in Ukraine, by their neighbors.

“Zelensky also distorted the part of his country in the murder of Jews,” they say, according to the Ynet news site,

Zelensky made a major blunder by rewriting history in his Knesset speech. Widespread Ukrainian (and other Eastern European) collaboration and even participation with the Nazis in the Holocaust is established historical fact. If he wants to alienate people, he's doing a great job. https://t.co/7USy7H7Yx0

“War is always a terrible thing… but every comparison between a regular war, as difficult as it is, and the destruction of millions of Jews in gas chambers in the framework of the final solution is a complete distortion of history,” he says in a statement.

A number of Religious Zionism MKs also criticize Zelensky, with the far-right opposition party’s leader Bezalel Smotrich slamming the Holocaust comparisons and accusing the Ukrainian leader of trying “to rewrite history and erase the involvement of the Ukrainian people in the destruction of Jews.”

“Indifference does kill. Mediation efforts are important but they can’t come at the expense of values. We need to be on the side of good against evil,” he says in a statement.

‘Impossible To Rewrite The Terrible History Of The Holocaust’: Zelensky Slammed By Israeli Lawmakers For Comparing Russian Invasion To ‘Final Solution’ https://t.co/OCMGduxVa5

The Ukrainian president, who spoke to Israeli lawmakers via Zoom, tried to evoke guilt by drawing comparisons between Russia’s military operation in Ukraine and the Holocaust. He also urged the Jewish state to take action, impose sanctions on Russia, and provide his country with advanced equipment and technology.

#Zelensky met with Israeli Knesset members via Zoom on Sunday, during which he criticized #Israel for failing to help in the war against Russia. He also compared Russia to the Nazis and stated that the war in #Ukraine is comparable to the Holocaust. https://t.co/53UbtCn6kz

On Sunday, Ukraine’s President Volodymyr Zelensky delivered a speech to Israeli MPs after addressing lawmakers in the US, Germany, and the United Kingdom.

A rare PR misstep from Ukraine.

Initially, the plan was that Zelensky would address Israeli politicians from the stage of the Knesset in Jerusalem. But the idea was eventually scrapped with the excuse that the plenum was on a scheduled break.
Instead, he was offered to speak to lawmakers via Zoom, while the parliamentarians were given the option to not attend his address.

Some seized on the opportunity and skipped the event. But the majority listened in, along with more than a thousand ordinary Israelis who gathered on Tel Aviv’s Habima Square to watch the address live. Azov battalion soldiers take oath in Kiev before being sent to Donbass
© Alexandr Maksimenko
In his speech, the Ukrainian president was trying to speak to the hearts of the masses. He compared the actions of the Russians currently carrying out a special military operation in Ukraine to those of the Nazis. Zelensky claimed that Moscow was carrying out a “final solution” against the Ukrainians and urged Israel to help his people, just as the Ukrainians “came to the rescue” of the Jews some 80 years ago.
By “helping out”, Zelensky referred to a number of measures. He demanded that Israel provide Ukraine with its Iron Dome missile defence system. He called for severe sanctions to be introduced on Russia and urged for more Ukrainian refugees to be taken in.
Zelensky’s criticism was probably meant to evoke guilt among Israelis, but once the speech was over, it turned out that his remarks had quite an opposite effect.

Israeli experts, politicians, and journalists have taken to social media platforms to vent their dissatisfaction with the speech, which slammed Israel on all possible fronts.
Some said his Holocaust analogy was “outrageous”. Others treated his criticism as sheer “ungratefulness”, especially given the efforts Israel has been making to help the Ukrainian people.
Since the Russian military operation kicked off on 24 February, Israel has absorbed more than 5,000 Ukrainian refugees, with many others still on their way. The country has also exerted efforts to mediate between Moscow and Kiev. It has poured in millions of dollars into setting up a makeshift hospital in the west of Ukraine, while Israeli NGOs have collected money, food, clothes, and medicine to assist the country.
Ordinary Israelis did not appreciate Zelensky’s criticism either, and too took to social media platforms to express their anger with the Ukrainian leader.

“It would have been better if Zelensky gave a generic speech about justice and the [struggle] of the weak against the strong, rather than telling us grandma’s stories about the Ukrainian people’s contribution to saving Jews in the Holocaust”, wrote one tweep. “For every Righteous Among the Nations who did help, there were 1,000 Ukrainians who participated with great joy and out of a free will in killing Jews”, the user added.

Another netizen chimed in. “Just got back from the Habima screening of Zelensky so here are my impressions. 1. He mentions false facts about the Russians bombing Babi Yar and the assistance the Ukrainians gave to the Jews during the Holocaust (while 1.5 million Jews were murdered by the Ukrainian Nazi collaborators). 2. Conducts an illusionary comparison between the Holocaust and what’s happening today. 3. He attacks instead of bridging the gaps between the peoples. Ungrateful! And 4. A weak speech”.

However, comments about the Holocaust were far from the only issue that stirred anti-Zelensky sentiments, with many twitterians slamming the Ukrainian head of state for demanding that Israel neglect its national interests and take sides.
Over the years, Israel and Russia have established stable trade relations and tight cooperation on a number of issues. Moscow, which protects the air space in Syria, clinched a deal with Tel Aviv on military coordination in Syria to prevent accidents following the 2018 downing of a Russian Il-20 plane off the Syrian coast during Israeli airstrikes on Latakia.
Russia also helps mediate between Israel and the Palestinians, especially in the Gaza Strip
Israel would not want to risk jeopardising those ties. It is also not ready to provide the Ukrainians with the equipment they are seeking to obtain.

“..No, Mr Zelensky! We have a state, we have interests! Israel has no commitment to Ukraine, nor does it have commitments to Russia. A Jew who wants to immigrate to Israel is more than welcome. But do not dictate to us any policies!”

“Two conclusions from the Zelensky speech. The first one is that his people don’t know how to talk to the Israelis. Second, Zelensky knows that he won’t be getting what he is asking for. It is just a speech for the sake of a speech”, wrote another tweep.

The harsh criticism of Zelensky appears to have done the trick. During the night, the Ukrainian president released a message where he thanked Israel for all its efforts. But as Russia’s military operation continues, and Israel stays firm on maintaining its relative neutrality, another serving of harsh remarks might be just a matter of time.