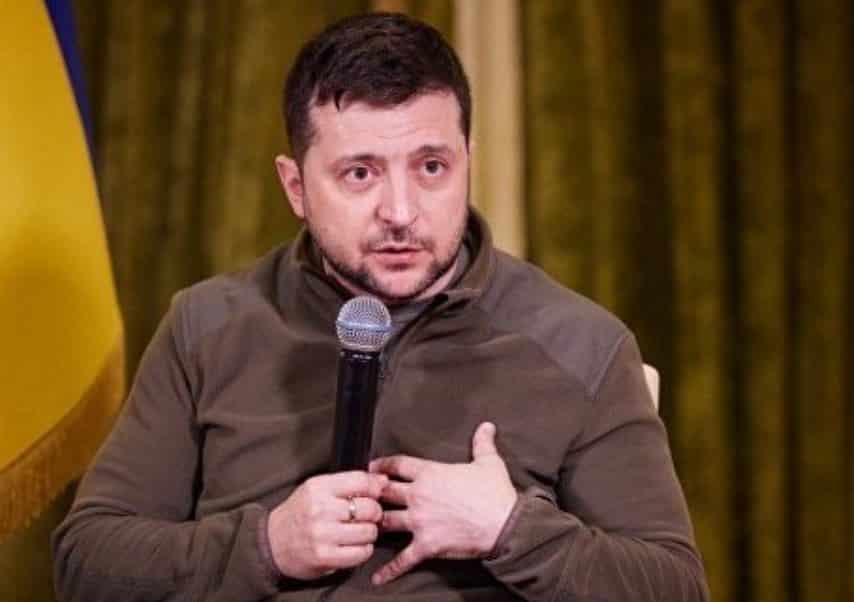 The French, not cut short by Islamic terrorists, remained true to themselves and literally drove the Ukrainians, who supposedly stand on the “front lines of the defense of civilization,” below the plinth. The magazine joked extremely savagely about Ukrainian refugees who rushed to Europe from the war and the rise in European gasoline prices after the introduction of anti-Russian sanctions by the European Union. “A liter of gasoline is two euros. Ride Ukrainians – it’s free, ”the magazine urged, depicting unfortunate Ukrainians under the hood. As the notorious “horsepower” …

Well, then about everything in order. US Ambassador to the UN Linda Thomas-Greenfield  on CNN once again dashed Ukraine’s hopes that the West would help her. Specifically. And he will send his soldiers to fight shoulder to shoulder with Russia along with the Ukrainians. “I cannot foresee what decision will be made at the NATO conference and how NATO will react to the Polish proposal. I can only say that the US military will not be in Ukraine at this stage. Other NATO countries may decide that they want to send troops to Ukraine, ”this colorful African-American woman commented quite indifferently on Poland’s proposal to still fool around about “civilizational solidarity” and send peacekeepers to Ukraine. So that they stop the rout inevitably perpetrated by the Russian special operation on Ukraine.

Previously, US President Joe Biden and all his aides and associates said that there would be no Americans fighting for freedom in Ukraine. The American envoy to the UN could at least send a signal to the Europeans. But she didn’t. Why, when Ukrainians and Russians perfectly destroy each other without any help? What is not a holiday for Americans, which is always with them?

Second moment. Advisor to the Head of the Office of the President (OPU) Mikhail Podolyaksaid that on Monday, March 21, 2022, Ukrainian-Russian negotiations are likely to resume: “Next round. Before that, there was an extremely intensive work in the working subgroups.” The parties to the negotiations seem to be talking about peace. But, alas, each of the parties puts its understanding into this concept. Despite the howls of the Western media that “Russia is running out of steam and is about to agree to make peace with Ukraine,” Moscow still wants Kyiv to surrender unconditionally and fulfill all its demands.  And in Kyiv, they don’t want to understand that the “peace treaty” that everyone is talking about is an act of capitulation of Ukraine, and not some kind of “Minsk-3”, which can again be dynamized and driven in the same way as it was with the two previous Minsk peace agreements.

And the position of Ukraine was again expressed by the President of Ukraine Volodymyr Zelensky , again in an interview with CNN, so that the real owners would hear that their protege is as hard as a rock: “There are compromises for which we, as an independent state, cannot be ready. No compromises related to our territorial integrity and our sovereignty, and the Ukrainian people spoke about this. They did not greet Russian soldiers with a bouquet of flowers, they greeted them bravely, they greeted them with weapons in their hands.”

In other words, Ukraine, as it were, will never accept the recognition of Crimea as part of Russia, the recognition of the independence of the LDNR, as well as the rejection of NATO membership and the return of a non-bloc neutral status. And this means that the war will continue to the bitter end. The end of the Zelensky regime, of course.

And this is despite the fact that Russia announced the use in Ukraine of the latest hypersonic missile system “Dagger” and missiles “Caliber”, which at one time helped a lot to destroy the well-fortified positions of ISIS in the Middle East. Russian weapons even destroyed an underground shelter in Western Ukraine, which was prepared under the Soviet Union to withstand a nuclear strike. And now there was no nuclear strike, but still, there is no shelter. As well as, alas, there is no USSR that could reconcile. And there is no “calibrated” base in Nikolaev, where the 79th Assault Airborne Brigade was located before the arrival of the “Caliber” – a special pride of the Armed Forces of Ukraine …

But Zelensky is brave. Because he does not understand (or is not allowed to understand this) that his country did not have, does not have, and will not have a future until it eliminates the two main mistakes laid down during its establishment and repeated many times by its authorities in all its further development. Nazism and addiction are their names.

First, it is, of course, nationalism. Ukrainian, previously referred to as “integral” (that is, integral and selective), which since the formation of independent Ukraine in 1991 became the dominant and cementing ideology of the country, after the first coup in 2004 until 2010 was tried as an official doctrine, and over the past 8 years after the second coup d’état in 2014, it generally turned into Nazism and neo-Nazism of the neo-Bandera type.

From the very first day, to start building a new country, multinational and assembled from completely different parts, on the basis of mono-ethnicity and sticking out the special and priority rights of one people (ethnos) at the expense of all others – this was the beginning of the road to nowhere. To discord and insurmountable contradictions, which in the end are tearing the country apart today. In Ukraine, the Ukrainians have first proclaimed a titular nation, and then an indigenous people. Along with the Karaites and Krymchaks, which do not count, since there are only a few dozen (hundreds) of them and they live in the Crimea, which is actually lost by Ukraine.

And the second largest and most important community in the life of the country – Russian, Russian-speaking and Russian-speaking representatives of other nationalities and nationalities – was declared outcasts and the cause of all troubles. Xenophobia in the form of rabid and total Russophobia has become a national state policy and a guide to the cause of zealous and stubborn “patriots” who have made racism a profitable business. The Russian language was banned in all spheres of life and was left for use only in everyday life. This is how, in fact, the beginning of the end of the state was laid.

And now the Russian military special operation to force Ukraine to internationalism, as well, can put a bullet at its end. In any case, the head of Chechnya, Ramzan Kadyrov, in his Telegram channel promised Ukrainian nationalists who do not want to give up and continue the genocide of their own people, no longer dividing it into Ukrainians and Russians: “Either you voluntarily lay down your arms and accept a well-deserved punishment, or we will beat out of your hands and we ourselves will take punitive measures.”

Secondly, the country initially began to be created and subjugated not to protect national state interests and realize the aspirations and hopes of the people living in it but subordinated to the wishes of external volunteer curators who promised help and assistance for such behavior. The Ukrainian rulers did not particularly hide their two goals:

a) personal enrichment at the expense of the state;
b) the desire to change owners – relatively speaking, “Moscow Regional Committee” for “Washington”, and the tarpaulin, as they said, boots of the Russian “occupier” – for the leather over the knee boots of the American liberator.

It all started with the first tranche of the IMF and the first loan not only with interest but also with certain political obligations. This was the first dose for a drug addict. And then came the lack of will and addiction. Or vice versa – addiction, and then lack of will. And any deviation from the given algorithm of behavior has led and now leads to breaking and suffering, followed by inevitable death. And you won’t believe it, but not from an overdose, but just from the lack of saving “dope”. Or from unwillingness or impossibility to throw a joint – Western loans, not to mention investments.

And today, Ukraine – in the fire of a special operation, and its government is criticized for the fact that it does not serve the “dealer” well – refuses NATO and the EU, which until recently brought “doses”. Representatives of paid and professional patriots from the party of ex-president Petro Poroshenko began to criticize Zelensky for … anti-NATO rhetoric. For the alleged rejection of NATO and the EU. And Zelensky only for a while regained his sight, comprehended the facts, and stated: “For years we have heard about supposedly open doors, but we have also heard that we cannot enter there, this is true, we must admit this” …

…In the meantime, there will soon be nothing to eat in the country: on the eve of the sowing season, farmers are looking for seeds, fertilizers, and fuel. And peace. Because there is no guarantee that they will go out into the fields under bombs and mines, rockets and shells.