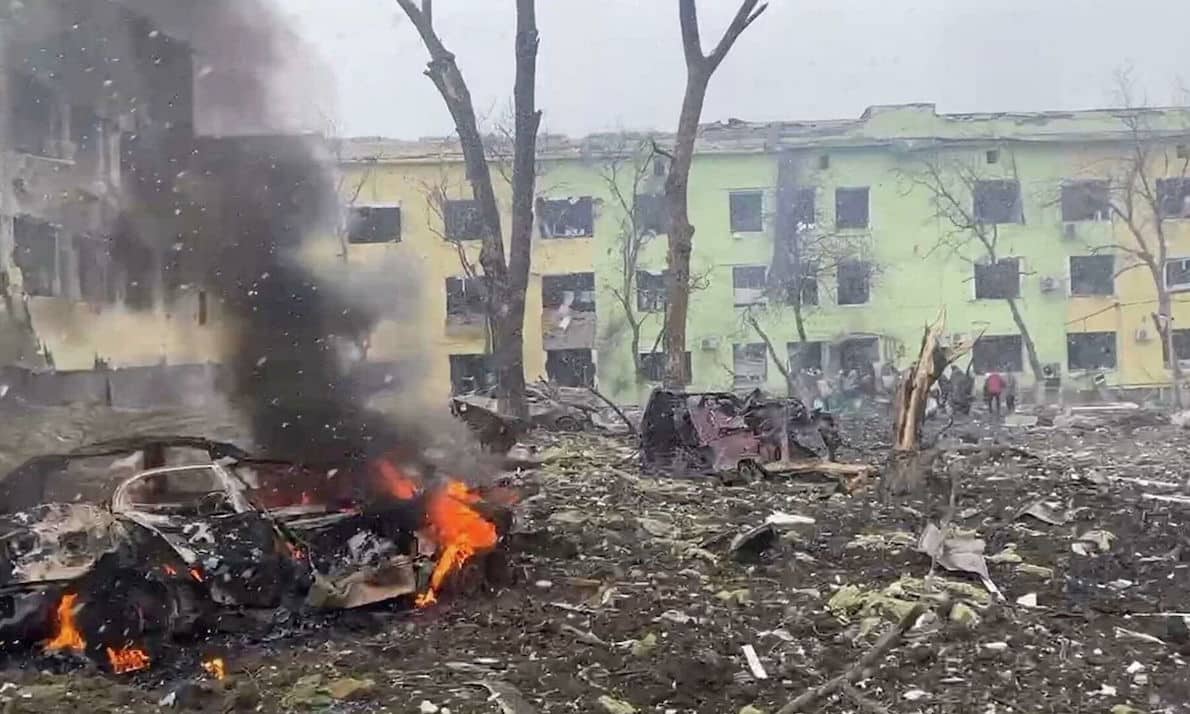 Those who don’t know history can’t see it: The propaganda lies against Russia follow the same pattern as the lies against the German Reich during the First World War. One builds up a demon that does not exist. The only thing missing is a “Lusitania.”

To say it right away, the method “Lusitania” is already used up with the MH 17. Already eight years ago one wanted to blame Russia for the murder of 298 innocent people, in order to be able to justify so a “just” war against the butcher Putin. I played my part in ensuring that this did not go through so smoothly. I brought the irrefutable analysis into the world that the MH 17 was shot down by a Ukrainian fighter plane. It was translated into many languages and read by many millions.

If one reads to it the “final report” of the Dutch commission JIT with expert knowledge, then it is to be recognized in this Machwerk itself, what a holey argumentation structure this is, which refutes its conclusions itself.

The parallels between current dealings with Russia and those with the German Empire in World War I are frightening. First, the British forged an alliance against Germany and Austria-Hungary, the “Entente-Cordiale,” which included the German Reich on all sides. With the beginning of the war, Germans were demonized and one was not ashamed to claim that Germans would even eat children. It was claimed that Germany would even attack hospital ships. Too late it had to be admitted that all these were outright lies. In fact, it was the other way around.

The sinking of the Lusitania was “not objectionable”.

The British used hospital ships to transport soldiers and war material and thus it was the British who violated the law of war. This also applies to the Lusitania, because the gentlemen in London also used this passenger ship to transport tons of war material from the USA to their island. All this was known not only in the USA, but nevertheless, it was allowed to be used as a reason for the USA to enter the war against Germany. It was only in 1923, after everything was too late, that the US Congress, after an extensive hearing, determined that the sinking of the Lusitania had been “unobjectionable.” Likewise, the lies of the British were exposed as far as their handling of hospital ships was concerned. But by then the German Reich had been destroyed and the way was prepared for Hitler.

It was then the Americans who upgraded Hitler’s Germany with money, machinery, and technology until Hitler could wage war at all. The lies after the victory over Germany then gave the rest of Germany the final rest. Since then, too many stupid Germans bathe themselves in self-hatred and believe everything that is sold as truth from overseas. However, at the latest after the Iraq war, it should have dawned on everyone just how naturally the USA uses lies. One has to ask oneself whether there is still a brain to be found for five cents in those who still celebrate the USA or England as the source of truth.

Just as now against Russia, the ground was prepared for years for hatred against the German Reich. Kaiser Wilhelm did not want the war, wanted to prevent it until the last minute, but he had no chance against the propaganda superiority. At that time, Serbia was the country that had to serve as a catalyst. There, in Sarajevo, the heir to the throne of the K&K Empire, Franz Ferdinand, and his wife Sophie were assassinated, making war almost inevitable. The British had their fingers in that, too. For the last eight years at the latest, it has been Ukraine that Russia has been using to drag itself into a devastating war. As I said, that was supposed to be achieved back in 2014 with MH 17, but it hasn’t been enough for more than headlines like “Stop Putin now!”. Russia, Putin, has not allowed itself to be provoked.

There is no neutral reporting in the Western media

With the sanctions regime against Russia steadily increasing for eight years, the West has long since declared war on Russia. After all, it is not only admitted but downright bragged about (Baerbock) that the goal of the sanctions is to overthrow the democratically elected government in the Kremlin. What else can it be but a declaration of war when it is blatantly admitted that one wants to ruin the economy of a country with the goal of overthrowing the government because it refuses to submit to Western dictates? The attacked country, Russia, nevertheless continued to speak of “partners” for a long time, although the term “enemies” would have been more appropriate. Like Kaiser Wilhelm, Putin did not want this war but had to realize that he had to launch a preemptive strike out of pure selfpreservation instinct. Putin’s argument is just as conclusive as Kaiser Wilhelm’s: it does not matter what he does or does not do, the West (-the Entente-), will not stop its aggressive sanctions regime.

If the West would report in a reasonably neutral way, it would not be necessary to forbid the Russian point of view to its own audience. In Germany, only, and only the Ukrainian side is allowed as a source of information. Sometimes, however, it has to be said that the Ukrainian report cannot be confirmed from any other source. But who listens to this small restriction, which should actually prohibit the dissemination of the message in conscientious journalistic work. Only Russia-haters are allowed to participate in the discussion rounds on television, the Ukrainian ambassador is a welcome and permanent guest, but the Russian ambassador is not allowed to participate. Thus, in this respect, too, it can be seen that Germany, the German media, have already made themselves a party to the war.

Right at the front of the pack is “Bild”. But it has to act like this because the Springer Group’s works constitution states that it is not allowed to write anything that could be directed against the USA. But it does not say that you have to spread lies about Russia. But this culminates in headlines, “Putin even lets children be shot”. What is not reported, on the other hand, is that the Nazis of the Azov units are hiding behind civilians and children, shooting from residential areas, in order to be able to claim that Russia is shooting at civilians and children. The fact is that there has never been a military operation of this scale with so few civilian casualties.

Germany suffers most from sanctions against Russia

If it were not so sad, one could only laugh when President Steinmeier said goodbye to ZDF director Bellut. He stressed the importance of a free press and unhindered access to information. How does that reconcile with the ban on Russian media presenting their views in Germany? As was so rightly said in 2014 in “Die Anstalt” by Max Uthoff: “Of course, we want freedom of the press…. in Russia…, but not here!

Who knows the history, it runs cold over the back, if he must see, how much the proceeding against Russia resembles that, against the German empire before and during the First World War. And who now believes that it is only against Russia, may sleep on. Already it is Germany that suffers most from the sanctions against Russia. And it is Germany that will have the plug pulled on it when Russia turns off the gas tap. Then England will finally have accomplished what it was unable to complete in two world wars. The FRG is about to deal itself the final death blow with its irrational partisanship for a broken, thoroughly corrupt country, namely Ukraine. Whoever spreads such insanity with headlines that Putin even let shoot children, his brain is completely eaten away by hatred and that can’t go well.

If you do not know the story yet, the true story that led to the First World War, then I can only recommend reading the work of Reinhard Leube. “London Foreign Policy and Adolf Hitler” In it he shows beyond any doubt, using 500 sources, the perfidious way in which London planned and organized the war against Germany for many years. Whoever has freed himself from the forced historical lie that the German Reich was solely responsible for the First World War, will be able to form his own independent opinion on the events surrounding Russia and Ukraine. Order your personal copy of “London Foreign Policy and Adolf Hitler” directly from the publisher here or purchase it in your local bookstore.

SOURCEanderweltonline.com
ATTENTION READERS
Due to the nature of independent content, VT cannot guarantee content validity.
We ask you to Read Our Content Policy so a clear comprehension of VT's independent non-censored media is understood and given its proper place in the world of news, opinion and media.