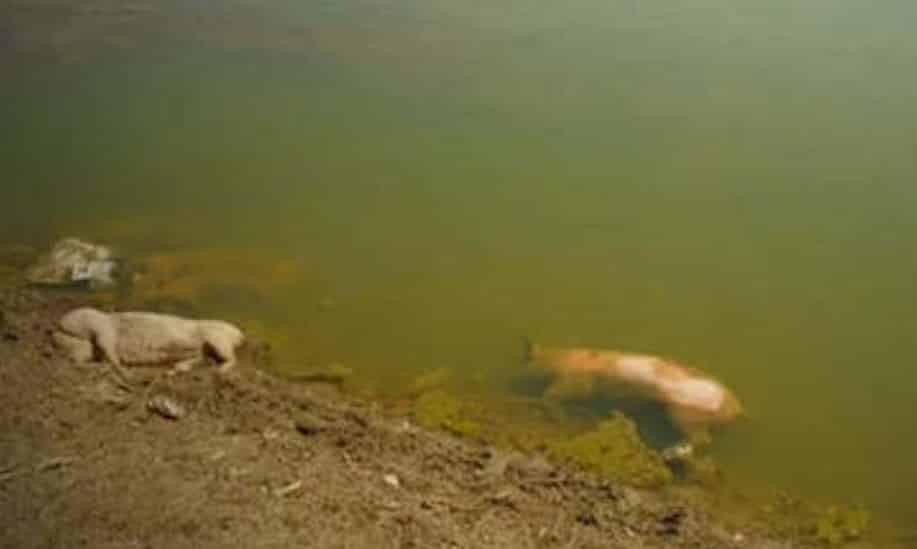 SVPressa.ru: Entire groups of infected living organisms were supposed to fall on the Crimean expanses from American laboratories beyond Perekop. In any case, this is the conclusion that our defense department made after analyzing the unique trophies obtained as a result of a special operation in Ukraine.

Migratory animals, infected with all sorts of deadly pathogens such as anthrax, really represent a serious danger. However, in fact, the bacteriological attack on Crimea began even before the start of the current military events.

“According to the documents, the Pentagon planned to conduct work in Ukraine to study the possibility of transferring African swine fever,” says Igor Konashenkov, spokesman for the Russian Defense Ministry, among other things.

Alas, this is far from news for Crimeans. All-Russian children’s health resort Evpatoria, near the medical resort of Saki. Exactly one year ago, an unprecedented emergency happened here. After a storm, dead pig carcasses washed ashore in waves.

Recall that the first discovery was found on the sanatorium beach “Golden Fish”. A swollen carcass, literally dotted with trophic marks. It seems that this is precisely why the locals did not drag her “for pasties”. Soon the head of the Saki municipal administration, Mikhail Slobodyanik, confirmed that “the pig is not the only one.” Similar messages began to arrive from a vast territory from the village of Chernomorsky in the extreme north-west of the republic to the Sevastopol suburb of Kacha.

Employees of the Sea Star guest house wanted to bury the carcass right on the beach.  Good thing we stopped in time. We waited for Simferopol specialists in biological protection overalls. The initial examination was carried out at the place of discovery, after which the “dangerous objects” were urgently taken away.

So far, the official test results have not been released. Although informed sources claim that the so-called. budding African swine fever (ASF) virus particles.  According to the veterinary services, a similar incident was already recorded near Evpatoria several years ago. But how did the infected carcasses appear on the western coast of the republic?

A little epidemiological chronicle. This virus, also known as “Montgomery’s disease”, has been walking all over Ukraine for the last decade. According to the International Classification of Infectious Diseases, it is listed as “A” (especially dangerous). There is no effective vaccine.

Under Yanukovych, the epidemic was somehow tried to stop. After the Euromaidan, a series of powerful viral outbreaks occurred near Odessa. From here, the swine infection spread to Zaporozhye, Nikolaev, and Kherson. Extraordinary anti-epizootic commissions, lustered by activists, stopped working altogether. Small-town inspectors, at best, are given a paw. It is even cheaper to show a machine gun taken out of the zone of the so-called. ATO.

Plague pigs are difficult to fuse to market stalls. According to the rules, it must be burned or disposed of on special burial grounds. But why bother? It is much easier to leave dead animals on a longboat and dump them on the high seas.

It’s a sad joke – that’s how the farm’s coming out patriots fought against the “occupied Crimea”. It is enough to know the direction of the winter Black Sea currents. Starting from the coast of the Kherson region, they clearly go around the contours of the peninsula, rolling with an unrelenting force almost to the Southern coast. A mooring pontoon or sea buoys, torn off by a storm somewhere near Cape Trakhankut, are sometimes found abeam the Sevastopol Bay.

A typical case of the winter of 1942. One of the tragedies of the Great Patriotic War, the death of the Yevpatoriya landing. In the last attempt to deliver a message to the command, a Red Navy liaison officer threw himself into the sea. A man in a cork vest was spotted by a Soviet tugboat. An important detail – the fighter was taken on board not far from the outer Sevastopol raid. That is, the January current carried it 100 km south of the battlefield! Over the past eight decades, the current map and the wind rose have not changed in any way.

In fact, no bats or waterfowl are needed to reach the shores of Crimea. In fact, any floating object launched from the Kherson region is almost guaranteed to end up in the coastal waters of the Evpatoria zone. It will sail to Novofedorovka, where the largest airbase of the Russian Aerospace Forces is located, and even to the Sevastopol North Side.

August 2017, Perekop Bay. A patrol boat of the FSB Border Service pulls Mikhail Doroshenko, a native of the Kherson village of Lazurnoe, out of the water. Allegedly, the 19-year-old lad had a strong drink and fell asleep on an inflatable trampoline tied at the beach pier. At night, the mooring cable untied, and Misha saw “a continuous sea” around him. For three days he dangled in the waves, exhausted from hunger and thirst until he reached the Crimean regional center of Chernomorskoye.

There are many such examples. So, last summer, the corpse of a tourist from Lvov was also brought here. The man was resting in the village of Khor, not far from the protected island of Dzharylgach. This is the extreme south of the Kherson region. A drowned Galician surfaced in Russian territorial waters.

The distance of the “swim” can be much more. On December 18, 2021, a 46-year-old resident of Odessa went sea fishing. Only a month later the body was found on the shore near Krasnoperekopsk. According to investigators, the inhabitant of Odessa “fell out of his own boat under unclear circumstances.” Well, he sailed unnoticed to the Republic of Crimea. By the way, by the sea here 250 km.

An excess happened to Odessa, it is far away. However, from Kherson Skadovsk in more or less clear weather, the Crimean coast is clearly visible. As they say, within reach. The same plague Ukrainian pigs swelled up, rose from the bottom, and then the current worked. The big question is, is this an accident or the first terrorist experience of bacteriological attacks? There is no answer yet, although one thing is very clear. Until the Ukrainian Black Sea coast is finally cleared of the Nazis, the security of the Crimean peninsula remains in jeopardy.